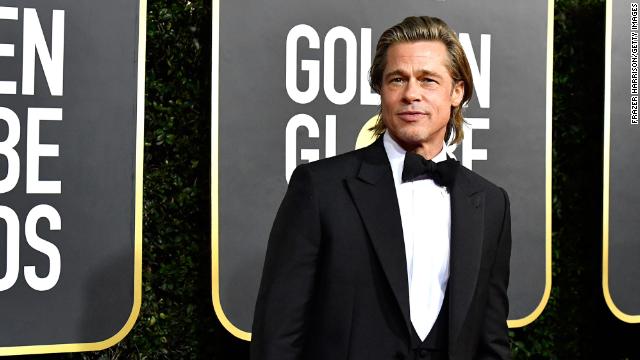 You got to love an actor who has been in the industry for decades and still says "Holy moly" when he wins.

That's just what Brad Pitt did when he scored best supporting actor in a motion picture for "Once Upon a Time in Hollywood."

Pitt thanked "the man, the myth, the legend" director Quentin Tarantino and his "partner in crime," Leonardo DiCaprio.

Pitt even threw in a "Titanic" reference by saying, "Still, I would have shared the raft."

We are still mad about Jack and that raft!

Pitt also had jokes about his missed out on date fo the Golden Globes.

"I wanted to bring my mom, but any woman I stand next to they say I'm dating so it would have been awkward," he said, grinning.

Patricia Arquette used her moment in the spotlight at the Golden Globe Awards Sunday to describe the US as a country "on the brink of war" amid heightening tension with Iran while urging the audience to "beg and plead for everyone we know to vote in 2020."

Michelle Williams wins Best Actress, limited series or TV movie for "Fosse/Verdon," but has a much deeper message for everyone watching.

"As a woman I have the right to choose, to choose when and with whom." Williams said. "Women, when it’s time to vote, please vote in your own self-interest. It’s what men have been doing for years."

Williams' date was her go-to awards show bff, Busy Phillips. It was recently confirmed to CNN that Williams is pregnant and engaged to "Hamilton" director Thomas Kail. 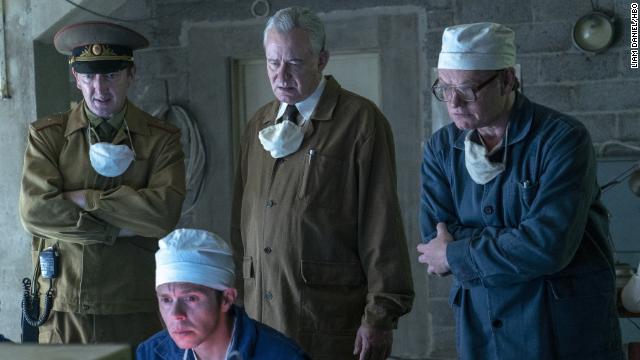 It took a lot of people to make "Chernobyl."

The Lithuanian, Ukrainian, Swedish, French and English crews got show outs after the series won.

The miniseries chronicled the Chernobyl nuclear disaster of April 1986 and the cleanup efforts that followed.

Australia was on lots of people's minds Sunday night.

Celebrated actress and Aussie Cate Blanchette noted that there were lots of Australians in the room when she introduced best picture nominee "Joker."

She took a moment to hail the volunteer firefighters.

As Gervais pointed out there was controversy when it came to the director category.

"No female directors were nominated," he said. "Not a one. That's bad."

But rest assured, he said, as he had a talk with the Hollywood Foreign Press Association which assured him that would never happen again.

"Because working with all the major studios they've agreed to go back to the way things were when they didn't even hire women directors," Gervais joked. "And that will solve the problem."

Sam Mendes has too many people to thank for his latest film, "1917." The movie's producers and actors. An "incredible" cast and crew.

His wife Ali [Alison Balsom] "for her love and support."

But ultimately, he thanked his grandfather, the inspiration for the film, who, Mendes said, "signed up for The First World War at 17."

He concluded that he fervently "hopes it never happens again."

The Hollywood Foreign Press Association clearly does -- they honored the esteemed actor Sunday with the Cecil B. DeMille Award on Sunday night.

The award celebrates "outstanding contributions to the world of entertainment."

Charlize Theron presented the honor to him, having been directed by him on the film "That Thing You Do!"

"He just makes the word a better place," Theron said of Hanks.

The always humble Hanks, who has been battling a cold, said "Most of these people in this room I would pay to see get their car wash."

He then got teary thanking his wife, Rita Wilson, and his five children.

Hanks also paid tribute to many of the people he worked with from his "Bosom Buddies" TV show cast members Peter Scolari and Holland Taylor to major movie stars like Meryl Streep and Denzel Washington.

Hanks speech focused mostly on the work - as his career has to great success.

“There’s an undeniable power that you just have to say, ‘Hey, I did work that was good enough that ended up touching people on a very personal level,’ ” the four time Golden Globe winner earlier told Savannah Guthrie on "Today."

Every year a Miss or Mr. Golden Globes is selected from the children of Hollywood stars.

This year the Golden Globes doubled up.

Pierce Brosnan's sons Paris and Dylan are the first ever pair of brothers to serve as Golden Globe Ambassadors.

Siblings have shared the duties before.