Our live coverage of the Golden Globes has ended. Read more about tonight's show here.

The 78th Golden Globe Awards got off to an awkward start, seeking to address controversy regarding the organization behind the ceremony, while experiencing technical glitches amid a pandemic-dictated format.

Although they honor both movies and TV, the Globes are watched most closely as a bellwether for the Academy Awards. The traditional awards season, however, has been disrupted by coronavirus, from the release of movies via streaming services to sliding the calendar for these events further into 2021.

After one of the more criticized nomination decisions, "Minari" — an American production about a Korean family in Arkansas — was named best foreign language film, since that's the way the HFPA chose to classify it.

In television, Netflix's "The Crown" was named best drama by Globes voters for the second time (the last coming in 2017), amid a wave of wins by British talent, including Josh O'Connor and Emma Corrin for playing Prince Charles and Princess Diana. "Schitt's Creek" followed up its final-season sweep at the Emmys by snagging another trophy as best comedy.

This year's ceremony proceeded under what amounted to twin clouds. Normally considered a big, free-wheeling party (including drinking), the pandemic required a more inventive approach, mirroring some of the remote techniques pioneered at last year's Emmy Awards. Tina Fey and Amy Poehler again hosted, but in a bicoastal format from New York and Beverly Hills, respectively.

More significantly, the broadcast followed reporting by the Los Angeles Times about questionable ethical behavior by members of the Hollywood Foreign Press Association — the group that presents the awards, and has long been the subject of such controversies — as well as its complete lack of Black members, which prompted criticism from a number of major Hollywood figures.

The night's first two awards, notably, both went to Black stars: Daniel Kaluuya, for the historical drama "Judas and the Black Messiah;" and John Boyega, for an installment in the Amazon anthology "Small Axe." The animated feature award also went to a film with a predominantly African-American cast, "Soul," which premiered on the streaming service Disney+. The movie was also honored for best original score.

Neither directly addressed the controversy, although Fey and Poehler did, calling on the HFPA to address the lack of inclusivity in its ranks, during an alternating monologue in which Fey referred to the group as "90 international, no-Black journalists" and "European weirdos."

Few of the award recipients or presenters referenced the HFPA's issues, although "This is Us" star Sterling K. Brown wryly began his introduction by saying, "It is great to be Black — back — at the Golden Globes."

The otherwise-empty ballrooms were populated by masked first responders, while nominees watched from home. The cutaways, however, featuring all of the nominees had an ungainly quality, and Kaluuya's feed experienced technical difficulties before he could deliver his acceptance.

Organizers of the awards stated in advance that they would address the latter concern within the broadcast, but three members spoke of doing better in only the broadest of terms. "We look forward to a more inclusive future," Turkish journalist Ali Sar said in conclusion.

NBC, which pays millions each year for rights to televise the ceremony, has had no comment regarding the HFPA and the latest concerns surrounding it.

The nominations underscored the weirdness of this year's awards process, with many movie theaters closed and streaming services, especially Netflix, occupying an expanded role. Nominations for the Oscars — like the Globes, delayed due to the pandemic —will be announced on March 15. 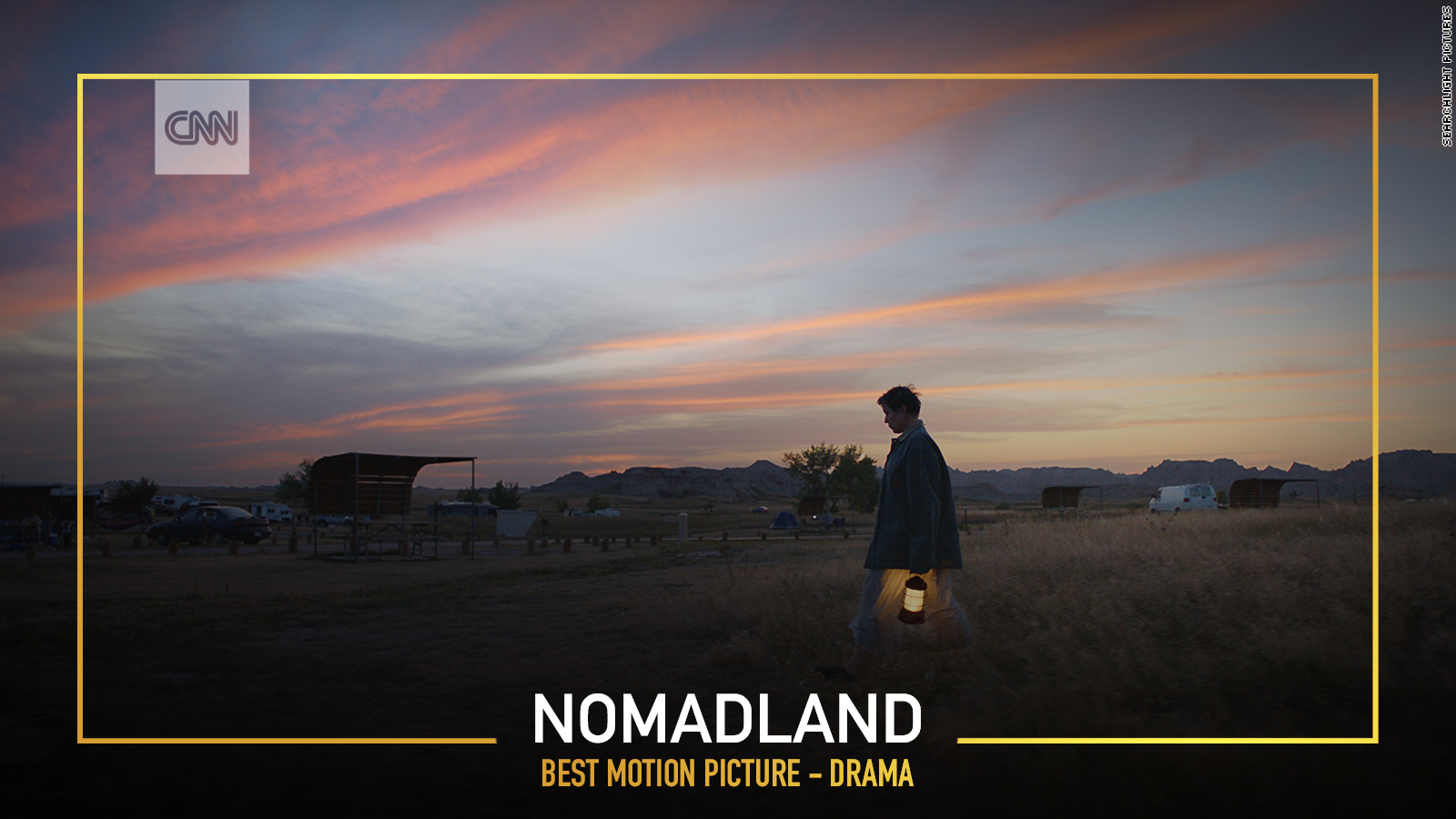 Michael Douglas and his wife, Catherine Zeta-Jones, took the stage to present the award for Best Motion Picture Drama, which went to "Nomadland."

"For everyone who has gone through this difficult journey this is for you ... we don't say goodbye, we say see you down the road," said director Chloé Zhao.

Earlier in the evening Zhao won the Golden Globe for best director. She is the second woman to win in this category.

The film stars Frances McDormand, a woman named Fern who has lost her job and her husband has recently died. She decides to travel the United States in a van while making her way out West. The film also stars David Strathairn, Linda May, Bob Wells, Derek Endres and Peter Spears. 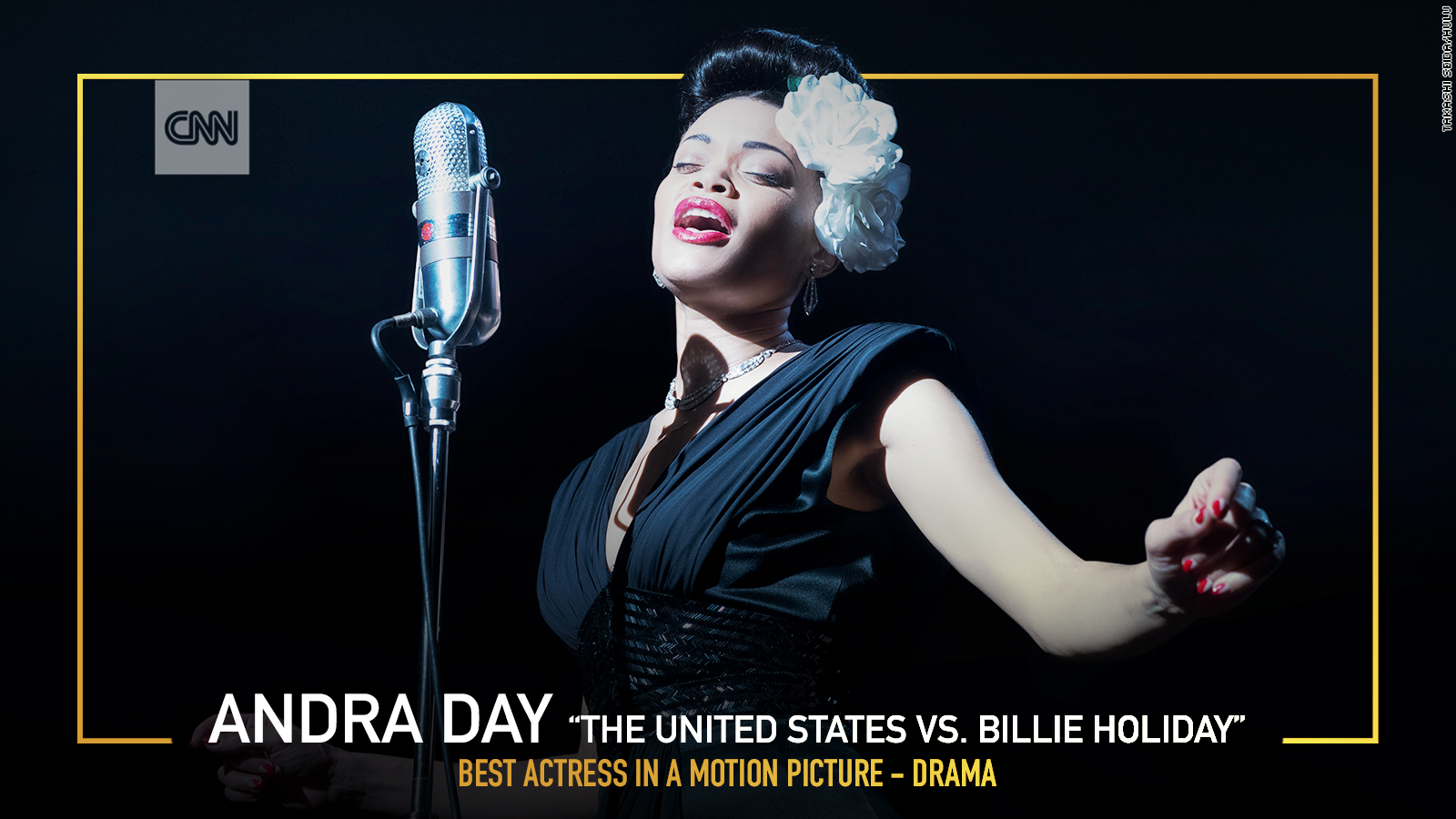 Day was visibly emotional during her speech, saying she was in "the presence of giants" of other actresses during the movie.

Day said the singer Billie Holiday "just transformed me with this role, and with her presence and with her spirit."

It's common for the winners of the Cecil B. DeMille Award to walk down memory lane discussing their numerous career highlights.

But actress Jane Fonda took a different tack when she accepted the prestigious lifetime achievement award at the Golden Globes Sunday night.

Fonda began by exalting storytelling as an art form and praising the work of the actors and directors behind many nominated works this year. She ended by calling for better leadership in Hollywood to make sure everyone's stories are told.

"Stories — they really can change people. But there's a story we've been afraid to see and hear about ourselves in this industry — a story about which voices we respect and elevate, and which we tune out," Fonda said.

"Thank you all the members of the Hollywood Foreign Press Association I'm, I'm so moved to receive this honor. Thank you.

You know, we are a community of storytellers, aren't we? And in turbulent, crisis-torn times like these, storytelling has always been essential.

You see, stories have a way to ... they can change our hearts and our minds. They can help us see each other in a new light. To have empathy. To recognize that, for all our diversity, we are humans first, right?

You know, I've seen a lot of diversity in my long life and at times I've been challenged to understand some of the people I've met.

But inevitably, if my heart is open, and I look beneath the surface, I feel kinship.

That's why all of the great conduits of perception — Buddha, Mohammed, Jesus, Laotzi

— all of them spoke to us in stories and poetry and metaphor.

Because the nonlinear, non-cerebral forms that are art speak on a different frequency.

They generate a new energy that can jolt us open and penetrate our defenses so that we can see and hear what we may have been afraid of seeing and hearing.

Just this year, "Nomadland" helped me feel love for the wanderers among us. And "Minari" opened my eyes to the experience of immigrants dealing with the realities of life in a new land.

And "Judas and the Black Messiah," "Small Acts," "US vs. Billie Holiday," "Ma Rainey," "One Night in Miami" and others have deepened my empathy for what being Black has meant.

"Ramy" helped me feel what it means to be Muslim American.

"I May Destroy You" has taught me to consider sexual violence in a whole new way.

The documentary "All In" reminds us how fragile our democracy is and inspires us to fight to preserve it.

And "A Life on Our Planet" shows us how fragile our small blue planet is and inspires us to save it and ourselves.

Stories: They really, they really can change people.

But there's a story we've been afraid to see and hear about ourselves in this industry. A story about which voices we respect and elevate — and which we tune out.

A story about who's offered a seat at the table and who is kept out of the rooms where decisions are made.

So let's all of us — including all the groups that decide who gets hired and what gets made and who wins awards — let's all of us make an effort to expand that tent. So that everyone rises and everyone's story has a chance to be seen and heard.

I mean, doing this simply means acknowledging what's true. Being in step with the emerging diversity that's happening because of all those who marched and fought in the past and those who've picked up the baton today.

After all, art has always been not just in step with history, but has led the way.

Thank you, thank you so much." 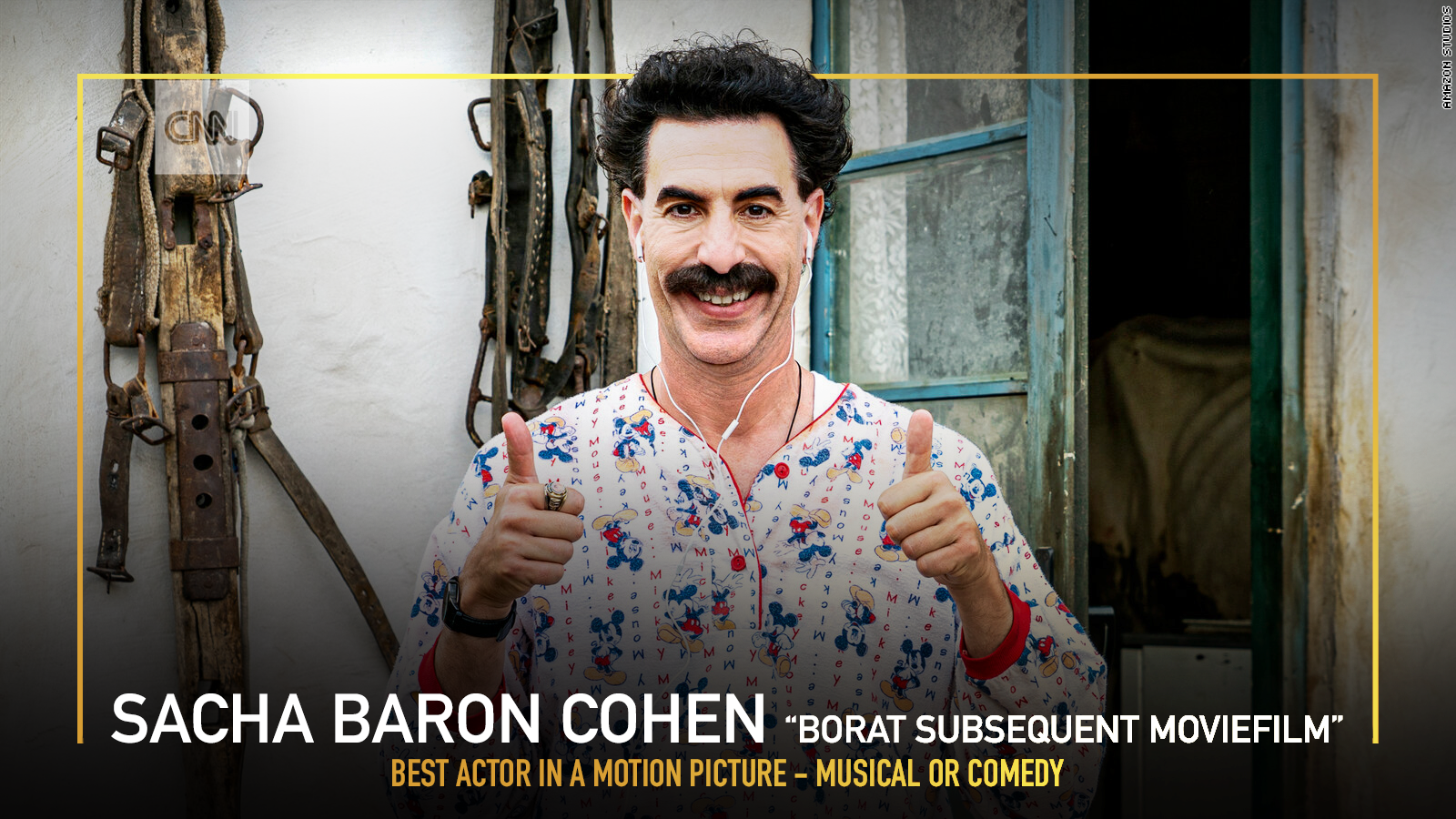 As Borat would say, very nice!

Sacha Baron Cohen took home the award for Best Performance by an Actor in a Motion Picture Musical or Comedy for his hit movie "Borat Subsequent Movie Film." The film was a sequel to his popular 2006 film "Borat."

"Donald Trump is contesting the result," Cohen joked during his speech. "He's saying a lot of dead people voted."

It was a category that didn't have a clear winner with many fans thinking Lin-Manuel Miranda might take home his first Golden Globe for "Hamilton." 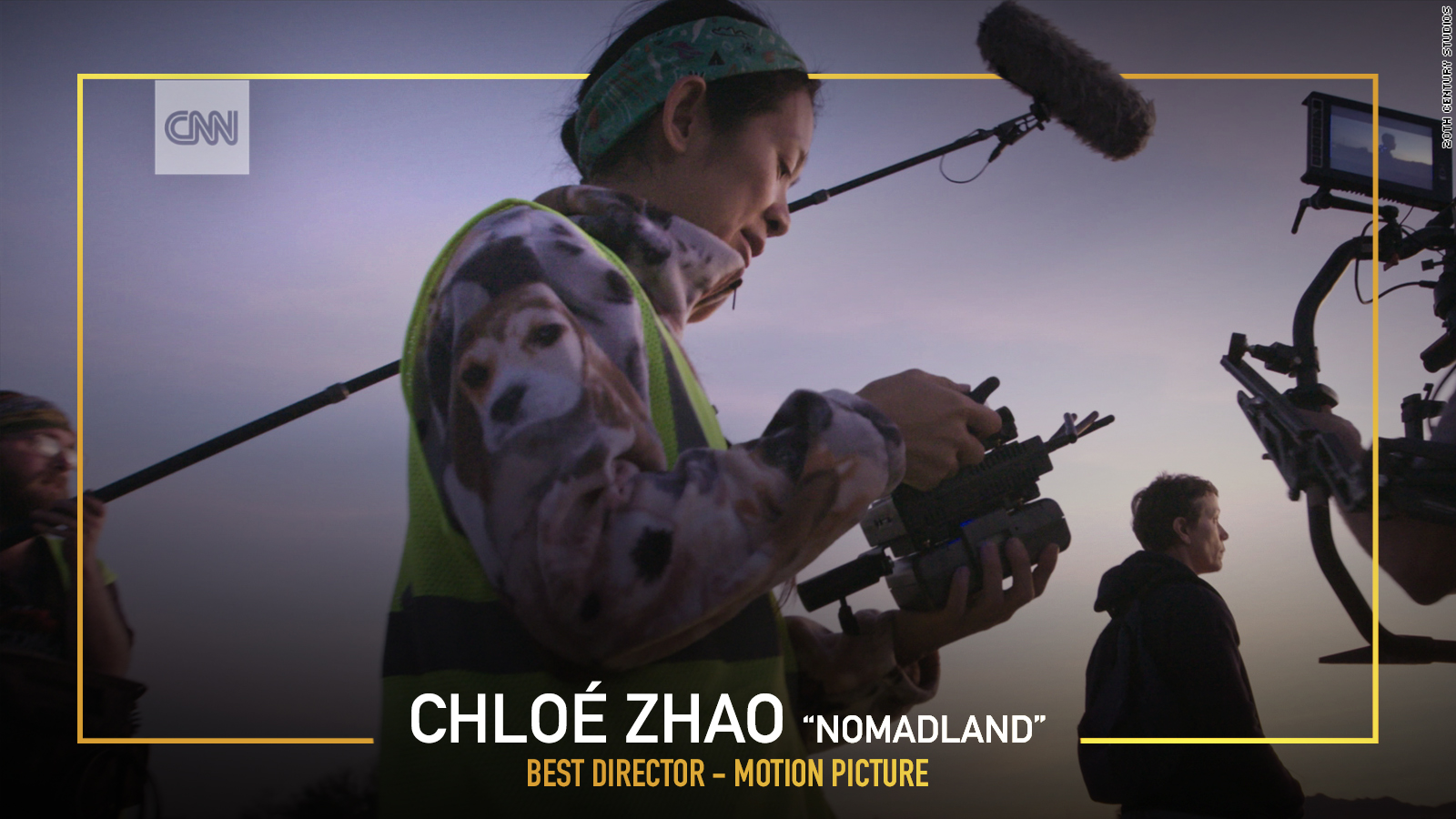 The Golden Globe for best director went to Chloé Zhao for "Nomadland."

Zhao said the award belongs to the whole cast and crew of the film. She read a few sentences about compassion from Bob Wells, one of the "nomads" featured in the film. "Compassion is the breakdown of all the barriers between us," Wells wrote. 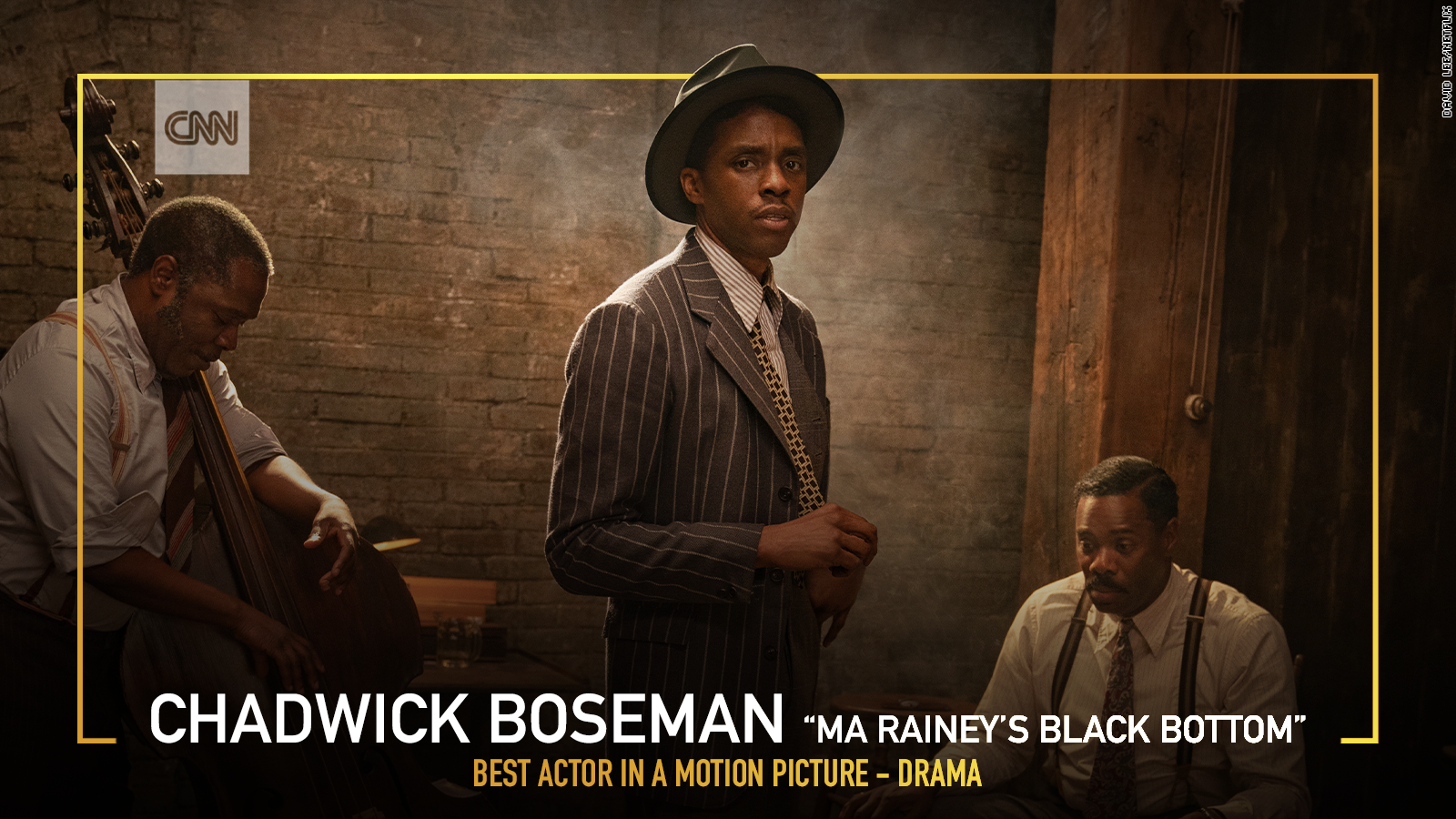 Chadwick Boseman was awarded a posthumous Golden Globe for Best Actor in a Motion Picture Drama for "Ma Rainey's Black Bottom." It was his final role before his death last year after a battle with colon cancer.

She went on to say, "I don't have his words but we have to take all the moments to celebrate those that we love."

For the first time in Golden Globe history, three female directors earned nominations for best director, bringing calls for increased recognition for the work of women in Hollywood to an important moment.

Nominees Chloé Zhao ("Nomadland"), Emerald Fennell ("Promising Young Woman") and Regina King ("One Night in Miami") bring the total number of woman nominated in the category in the Globes' 78-year history to eight.

The other best director nominees this year were David Fincher ("Mank") and Aaron Sorkin ("The Trial of the Chicago 7").

Zhao, King and Fennell join a short but prestigious list of fellow female nominees in the category. Barbra Streisand, Jane Campion, Sofia Coppola, Ava DuVernay and Kathryn Bigelow have also been nominated in the category, with Streisand being the sole winner among them.

In hailing King's accomplishment for her directorial feature film debut, Amazon Studios also pointed out that she is now the second Black woman nominated in the category.

Zhao, meanwhile, is the first woman of Asian descent to be nominated in the category. 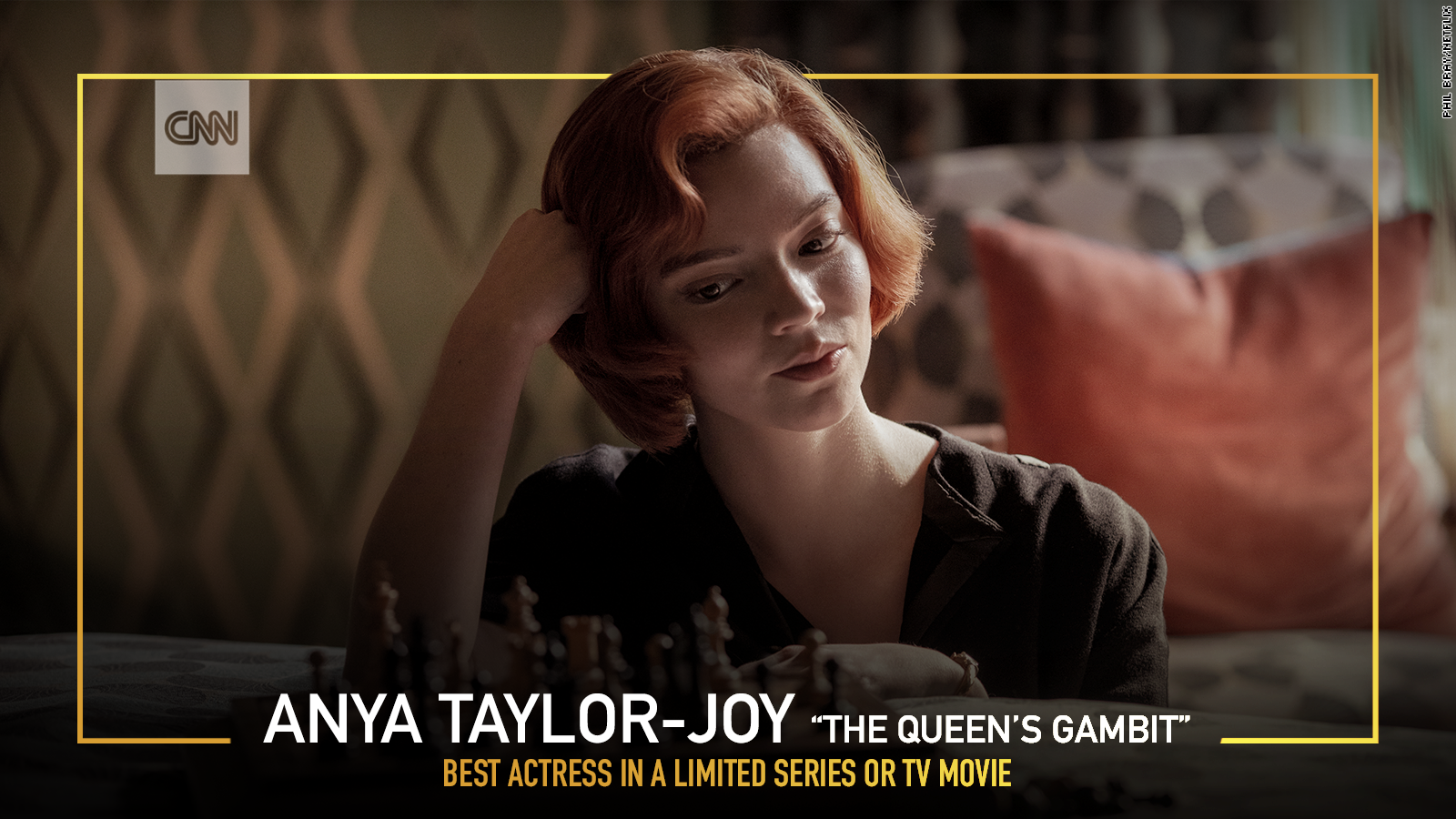 Taylor-Joy was up against some of Hollywood's veteran actresses like Nicole Kidman for HBO's "The Undoing," and Cate Blanchett for "Mrs. America."

"The Queen's Gambit" has received critical acclaim, telling the story of an orphan who overcomes addiction to become an internationally known chess star.

The show also took home an award for best limited series for TV.