Actress Rachel Brosnahan nabbed a win for her performance in "The Marvelous Mrs. Maisel."

She thanked the "incredible village" it takes to produce the show.

"Our village is a matriarchy," Brosnahan said.

She celebrated that women hold leadership positions across the show.

Quick, somebody get her a contract!

Twitter lit up Sunday night about the woman handing out Fiji Water on the Golden Globes red carpet.

At the very least she won for meme of the night after Twitter dubbed her "Fiji Water Girl" and couldn't stop talking about her standing there in the background, poised with bottles of water to quench the throats of the stars.

The true winner was probably Fiji Water, which was one of the sponsors of the night.

Seriously, whoever directed her to just stand there behind every celeb needs a raise.

Here's the thing though: How interesting is your awards show when one of the most exciting things is the person holding bottled water?

Cuarón, who won a best director Oscar for "Gravity" in 2014, thanked the Hollywood Foreign Press Association, his partners and actresses Yalitza Aparicio and Marina de Tavira, who starred in the Netflix film.

He also paid tribute to his family and his home country, Mexico, for shaping and creating him. 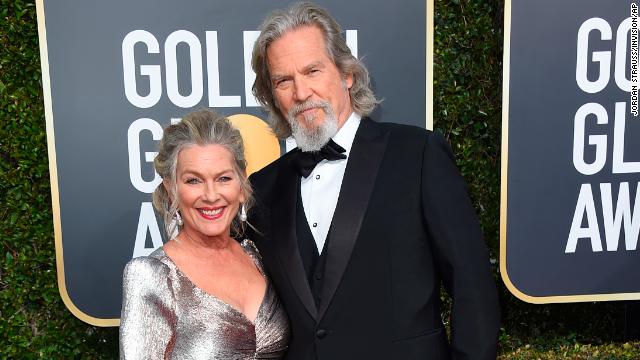 Jeff Bridges received the Cecil B. DeMille Award for his lifetime work and achievements.

During his acceptance speech he thanked his late father, Lloyd Bridges, and pulled up his sleeve to reveal his cuff links.

"They were your dad's, too!" Bridges said.

Bridges, who has starred in films like "The Big Lebowski" and "True Grit," has received five Globe nominations. His first came in 1984 for "Starman," followed by nominations for his performances in "The Fisher King" and "The Contender."

Bridges won a Golden Globe for best actor in 2009 for "Crazy Heart." His fifth nomination came in 2016 for "Hell or High Water."

Darren Criss feels like he finally made the varsity.

He won for best performance by an actor in a series, limited series or motion picture made for television for "The Assassination of Gianni Versace: American Crime Story."

The former "Glee" star has been hailed for his performance as Andrew Cunanan, the man who killed famed designer Versace.

Criss thanked plenty of people, including his mom, "a firecracker of a Filipino," as he gave a nod to the importance of representation in Hollywood.

Patricia Clarkson snagged the best performance by an actress in a supporting role in a series, limited series or motion picture made for television for "Sharp Objects."

Clarkson took to the stage and uttered a "hot damn."

She thanked her parents, her co-star Amy Adams and especially her director.

"You demanded everything of me except for sex, which is exactly how it should be in our industry," Clarkson said.