Abode Cam 2 review: A $35 camera that punches above its weight

There’s no shortage of home security companies and products that offer peace of mind through various means. Abode, whose main product offering is whole-home DIY security systems and monitoring, has a new home security camera. The $35 Abode Cam 2 is affordable, can be used with or without a full Abode security system, and with a $15 monthly subscription, the camera will keep a 24/7 record of anything that happens within its view.

We’ve been testing the Abode Cam 2 for the last few weeks and have found it to be a capable, high-quality camera that costs far less than it should.

The who, what and how

Who this is for: The Abode Cam 2 isn’t just for added home security. At $35, it’s a cheap and easy way to check in on your pets, kids or house while you’re away. You don’t have to sign up for a plan if you want to use it as a long-distance monitor, and at this price, the build and picture quality is fantastic.

What you need to know: The $35 Abode camera can do more than livestream whatever it’s overlooking to your phone or computer. You can sign up for a $15 monthly subscription and it’ll store the last 10 days’ worth of 24/7 video in Abode’s cloud. But you don’t have to pay monthly to use the Cam 2. Forgoing any sort of subscription will still allow you to livestream from the camera at any time. Or for $6 a month, it will record video clips triggered by motion or people and put 10 days’ worth of clips at your fingertips.

How it compares: The Abode Cam 2 looks a lot like another low-cost security camera, the $29.99 Wyze Cam V3. In addition to cloud monitoring, the Wyze Cam V3 can record directly to a microSD for those who don’t want video stored in the cloud. Ring’s $59.99 Indoor Cam is more expensive and can be added to any existing Ring monthly subscription. If you’re looking for an inexpensive camera to keep tabs on your pets, kids or your front door, Abode’s Cam 2 fits the mold, thanks to its clear picture and $35 price tag.

Easy enough to set up

Included in the box with the Abode Cam 2 are the camera, a USB cable used to power the Cam 2 and a wall adapter. There are also two mounting screws and the necessary hardware if you want to permanently attach the camera to a wall or to the outside of your home. The easier route is the base that’s built into the camera.

The front of the camera is primarily black, with the exception of the lower left corner that’s cut off with a sliver of white. The entire housing is a small square, measuring 1.97 inches in every direction. It’s pretty darn symmetrical. There’s a rotatable and adjustable base built into the camera, allowing you to stand it up and ensure that it’s positioned just right to frame the area you want it to overlook.

If you’ve ever looked at or used a Wyze Cam, then the design will look and feel very familiar to you. The square design of the Wyze with the included base doesn’t feel as well made as that of the Abode Cam 2, but the two cameras are very close in design.

On the back of the Cam 2 is a Micro USB port that provides power, a speaker for two-way communication and a button to reset the camera.

The camera’s housing has an IP65 rating for water and dust resistance to protect it from the occasional rain or snowstorm should you decide to place it outside. Abode does claim that the included cable is weatherproof, but we’d just make sure you’re plugging into an appropriate outdoor-rated outlet.

Once we decided where to install the camera in our home office, we downloaded the Abode app, signed up for a free account and followed the instructions in the app to activate the camera. All in all, it took under five minutes to go from unboxing the Cam 2 to having a working camera sitting on a corner shelf that could livestream video to our iPhone 12 Pro. 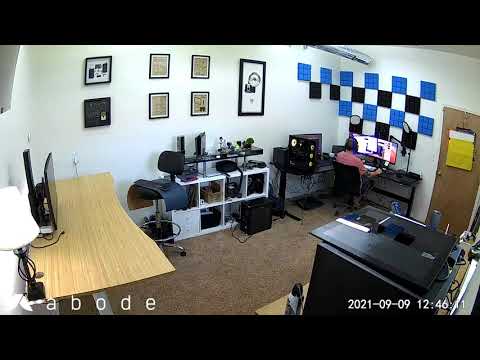 After weeks of testing, the Cam 2 has been delivering video that’s impressive with plenty of details. It’s all captured through a 121-degree horizontal field lens at 1080p video quality. That unique lens makes it effortless to capture a wide area, like our home office.

The video quality, both during the day and at night, has been impressive. Even though the Wyze Cam V3 captures 1080p video as well, the Abode Cam 2’s video looks much better to our eyes.

Whenever it’s dark, the Cam 2 uses ambient light — be it from a nearby streetlight or the moon — to add color to videos. In an environment that doesn’t have enough ambient light, the camera will still record black-and-white video. In our tests, the room was too dark for color video, but the black-and-white video still has a high-definition look to it and lacks any sort of overly saturated areas that you can’t figure out what you’re looking at. 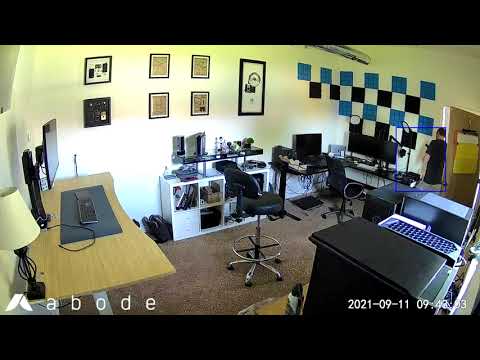 The camera’s biggest weakness is two-way audio, with the audio from the phone to camera often coming through unrecognizable. We found ourselves having to repeat ourselves a few times before our message was properly conveyed. It’s made possible by a built-in speaker and microphone.

The app makes it easy to quickly view recorded clips, be it from a push alert or when you view the camera’s timeline. It makes saving a clip or sharing a clip super simple.

You also have the ability to set up an activity zone or two, which tells the camera where to monitor for motion or people while ignoring the rest of the area. You can also toggle an option that shows a small box wherever the camera is detecting motion in a clip, which is immensely helpful if you’re trying to figure out what prompted the motion alert.

We were surprised by the overall video quality of the Abode Cam 2. The crisp picture and 24/7 recording make it a trustworthy home security product that adds peace of mind. Just don’t expect to yell at someone who’s at your front door and have them understand you on the first attempt.

The current monthly plans are confusing

Abode currently has three different monthly plans that you can use with the Cam 2. The prices range from free to $15 per month, with varying levels of capabilities. We’re going to try to break down the plans that even we, admittedly, had a hard time understanding.

You can buy a $35 Cam 2, set it up and use it to livestream video to your phone. The cost for that is $0 per month, but the camera will not monitor for motion or people — it won’t record any activity at all. It’s basically a camera in your home that you can use to check in on your pets, kids or just make sure everything is all right back at home when you’re away.

You can sign up for the $6 per month Abode Standard plan that activates the ability for the camera to record video clips whenever people or motion is detected. That’s in addition to being able to view a livestream. You’ll be limited to 10 days’ worth of captured video clips at this tier.

If you want to go one step further and have access to video clips captured by the Cam 2’s 24/7 recording feature, event detection and livestream capabilities, that will cost you $15 per month. That total cost comes from signing up for Abode’s $6 per month Standard Plan, plus the $9 per month for 24/7 recording. It’s really two separate plans stacked together. Signing up for both plans will cover all cameras in your home, so if you choose to add more than one camera it will be covered.

If nothing else, Abode would benefit from streamlining the plans offered to Cam 2 owners. It’s our job to research and break down the cost of owning a product, and we struggled with deciphering the different subscription options for the Cam 2.

The Abode Cam 2 is a little more expensive than the Wyze Cam V3 at $34.99, and it’ll cost you each month if you want to save any video clips since it lacks integrated storage. But you get a better picture and there’s something to be said about storing video in the cloud in the event that a would-be bad guy were to take your camera (and the footage it contained along with it).

The Abode Cam 2 is a fantastic stand-alone camera on its own. It’s also a great addition to your Abode security system or a good entry point into Abode’s ecosystem of home products.