Samsung is on a roll early in 2022. Just a month after unveiling the Galaxy S21 FE and the Freestyle Projector, the tech giant is back with a trio of new smartphones: the Galaxy S22, S22+ and S22 Ultra, all of which offer a refreshed look, improved camera optics and a fancy new processor from Qualcomm — the first-ever Samsung devices to do so.

All three of the Samsung S22 line are up for preorder now, with some special deals available, and will ship on Feb. 25. We’ve spent a little time with both the Galaxy S22 and S22+, so here is our breakdown of what’s impressive, what’s new and what stayed the same. We’ll have full reviews of both closer to launch and you can see our first look at the S22 Ultra here.

Where to preorder the Galaxy S22 and S22+

Samsung’s Galaxy S22 and S22+ are available for preorder and will begin shipping on Feb. 25. 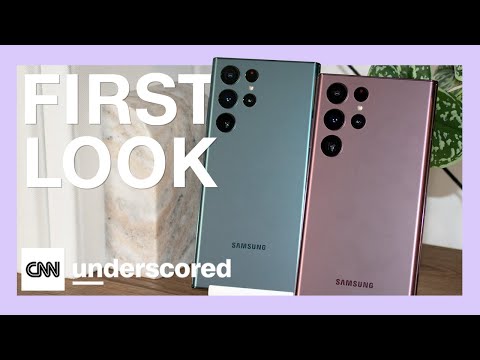 The Galaxy S22 and S22+ are finally sporting a truly high-end premium design. Samsung is ditching the cheaper-looking polycarbonate back for an aluminum and glass design. The S22 and S22+ will have a properly matched bump on the back, unlike the accent colors of the S21. There’s also no integrated S Pen or stylus support here. The bottom of the device features a SIM card slot, speaker and USB-C port, while you’ll find a power/sleep button and volume rocker on the right side.

The S22 and S22+ felt terrific in our hands, and were definitely a friendlier size for those with smaller hands and just more pocketable. We especially liked the flat design of the 6.1-inch (on S22) and 6.6-inch (on S22+) screens, and that they didn’t slope down on the sides. This felt more uniform and let us get a better grip. Regardless of screen size, you’re also getting that vibrant, sharp display. Yup, Samsung’s using the same Dynamic AMOLED 2X display on the S22 and S22+ as on the Ultra.

They’re also powered by the same Qualcomm Snapdragon 8 Gen 1 chipset with 8GB of RAM. The S22 and S22+ run Android 12 out of the box with Samsung’s latest interface. Both devices were quick to respond during our hands-on and offered a fluid experience. More good news here is that both of these (plus the S22 Ultra) are guaranteed to get four Android updates, which is a great promise and delivery on value from Samsung. It’s still behind Google’s support of software on the Pixel line, though.

The S22 and S22+ share the same camera setup and Samsung is increasing the sensor size, improving the software and sticking with mostly the same megapixel count.

The hardware is similar to the S21, which is in itself a top performer in the smartphone camera world. That baseline paired with software improvements — like better nighttime shooting and the improved portrait mode — should lead to less-blurry shots, quicker processing times and more details.