Welcome to Influenced, where we interview creators of all kinds about the gear they use to do their job — and their advice for aspiring influencers. This week, veteran internet personality Greg Miller breaks down the gear that allows him and his team at Kinda Funny to make content remotely, and explains why you already have everything you need to start your own YouTube channel.

Kinda Funny spent its early days recording out of Miller’s spare bedroom, using a setup that he calls “a train wreck of technology.” The crew eventually moved to a studio space in 2016 and, like much of the working world, had to quickly learn how to pump out high-quality podcasts and videos from home in 2020. Here are some of the key gadgets and tools that allow Miller and his team to entertain their hundreds of thousands of subscribers, even when they can’t be in the same room together.

You can’t create high-quality podcasts and videos without a good microphone, which is why Miller and his team opt for the Elgato Wave:3 mic for their daily livestreams and recordings. Miller loves the Wave:3 not just because it makes him sound great but also because it removes a lot of the headaches that can come with using high-end peripherals.

“The Wave is super easy to use,” says Miller. “I’ve been super impressed with it because I love video game tech, but I don’t like PC gaming. And so I have had nothing but problems in my life with PCs and the various things that some people really appreciate and try to problem-solve, and I hate it.”

So what makes the Wave:3 so user-friendly? For starters, it has some of the best controls we’ve used on a mic, including a handy tap-to-mute button and a knob that lets you adjust the balance between your microphone and PC volume on the fly.

But the Wave:3 really sings when used in tandem with its Wave Link companion software, which gives you a central hub for adjusting the volume of all of your audio sources (such as a game, a Spotify playlist and a Discord chat) with a few easy clicks. It’s the type of functionality you’d normally have to buy an expensive mixing board for, and a big reason why the Wave:3 is our pick for the best microphone for streamers — as well as a staple in content creator setups all over the web.

We’ve talked to lots of content creators, and nearly all of them have stressed the importance of good lighting. Even the best camera can’t fix an overly dark environment, and being well lit goes a long way toward making you look as bright and natural as possible on camera. Miller uses a pair of Elgato Key Lights, which, on top of making him look crisp and professional in his home setup, help him get mentally ready for his many on-camera hosting duties.

“For me, the lights coming on means something,” says Miller. “To turn them on… It’s bringing that energy up and getting ready to present.”

A popular choice among YouTubers and Twitch streamers, the Key Light stands out, thanks to a compact design that you can easily clamp to a desk, the ability to pump out 2,800 lumens of brightness for making you shine and a handy Control Center companion app for adjusting the brightness and color temperature on the fly. And if you have Elgato’s Stream Deck, you can make all of those adjustments with the quick tap of a button.

While it’s not a piece of hardware, online communications app Discord is the glue that allows Kinda Funny to function in a work-from-home world. And while Miller was skeptical of it at first, he’s grown very fond of Discord’s low-latency voice chat, which makes podcasts that are recorded remotely sound like they were put together in person.

“I don’t want the delay. I don’t want that moment where you talk over each other,” says Miller, recalling a conversation he had with friend and collaborator Andrea Rene over the possibility of recording remote shows pre-pandemic. “So when our hand was forced and this had to happen, I’ve been so impressed with Discord and the way that the latency is so low, it’s like we are in the same room.”

We’ve found Discord to be an especially invaluable tool for the many months we spent locked down at home. You can join or create a server to talk about just about anything in a few simple clicks, and its robust audio and video calling capabilities make it ideal for virtual game nights, quick catch-ups and professional podcasts alike. 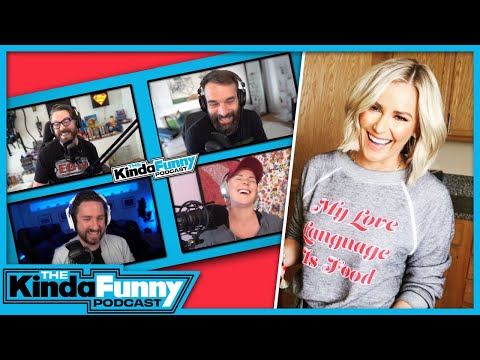 If you have dreams of starting a YouTube channel and becoming the next Kinda Funny, Miller says to just get started now — regardless of what equipment you have.

“If you are thinking about making YouTube content or podcasts, [you already have] what you need to do it. Start doing it,” says Miller. “Your first shows will be bad regardless of the tech you have. There’s such a, ‘When do I look at the camera? How do I edit? Do I breathe in the microphone here?’ It’s going to take you so long to get into a rhythm that really, your best bet is to start and then you will figure out what you need.”

According to Miller, all of that trial and error will eventually help you figure out what equipment you actually want to invest in.

“A lot of people do get away with just having the iPhone up here, right? And then talking into it with an AirPod or something, but maybe that’s what will be the break for you. You don’t mind the camera quality, but you want a different microphone,” says Miller.

“So now it’s about getting the right microphone. Then it’s about learning how to sync audio,” Miller continues. “It’s how I taught myself editing when I decided I wanted to do YouTube. I sat there and I started editing and I would Google the questions for Premiere Pro. I appreciated being like, ‘How do I turn this footage black and white? How do I freeze the frame?’ All of these little things I wanted to learn that I then went through and taught myself.”