Welcome to Influenced, where we interview creators of all kinds about the gear they use to do their job — and their advice for aspiring influencers. This week, we caught up with popular family-friendly YouTuber Brianna Arsement about her fancy RGB lights and sweet triple-monitor setup, and why all you need to start vlogging is your iPhone.

We’re big fans of multi-monitor setups here at Underscored, and we’re clearly not alone. Arsement’s current setup consists of not one, not two, but three Acer Predator XB272 displays, which allow her to easily bounce between important work tasks while cranking out high-quality gaming videos.

“I started with one monitor. I thought that was great, thought that’s all I needed. Now I have three and I don’t know how I did one,” says Arsement.

Arsement’s central monitor is where she plays Minecraft and Roblox, the two titles she’s best known for across her multiple gaming channels. Meanwhile, her left monitor allows her to keep up with her fans on Discord (and sometimes even bring them into games), while her right monitor is used for basic daily tasks like email.

The 27-inch XB272 is especially ideal for gaming content creators such as Arsement, thanks to a speedy 240 Hz refresh rate and built-in Nvidia G-Sync technology that work together to allow games to run as fluidly as possible without any nasty stutters or screen tearing. It’s also highly adjustable, whether you want to position it horizontally as your main gaming display or flip it in portrait mode to use as a second screen for keeping up with your chat room.

“I have a GoXLR, which is really helpful with my recordings, as well as a Stream Deck. Those have been really handy,” says Arsement.

Arsement is one of several creators who have recommended the GoXLR mixer to us, and it’s easy to see why. This gadget allows you to balance various audio sources, such as your voice, your game sound and your background music, on the fly without having to click around in your recording software of choice.

On top of offering handy mixing controls, the GoXLR allows you to record and play audio samples for use in your streams and videos, and has a variety of voice effect options for those times when you want to surprise your audience as a robot. And if the standard $499 GoXLR is out of your budget, the $199 GoXLR Mini offers the same core mixing controls, just without a lot of its big sibling’s bells and whistles.

Sitting next to Arsement’s GoXLR Mixer is her Elgato Stream Deck, which is a favorite among nearly every content creator we’ve talked to. This handy keypad gives you 15 buttons that you can program to do all kinds of tasks that make video production easier, from switching between various camera scenes and activating GIFs to sending automated tweets to promote your latest stream or video. According to Arsement, it’s one of many gadgets that’s allowed her to expand her tech knowledge with the help of her team.

“We have a lot of people in our office who are exceedingly tech-savvy, and that’s a huge blessing because it’s something I didn’t really grow up knowing a ton,” says Arsement. “I’ve learned so much in these two and a half years.”

In order to add just a bit more visual pop to her videos, Arsement and her crew have started using TitanTubes. These premium RGB light tubes can be programmed to glow millions of different colors, and are ideal for both illuminating your face on-camera as well as adding some fun accent lighting to your background.

“I love it because we use it for thumbnails and backlighting in our videos,” says Arsement. “And it changes colors! It’s super fun.”

TitanTubes certainly aren’t cheap, with a single tube selling for $850 and a four-pack going for a whopping $3,780. But if you’re a serious content creator looking to invest in some extra lighting to elevate your set, they’re worth a look.

I Surprised Unspeakable with 24 Gifts in 24 Hours! 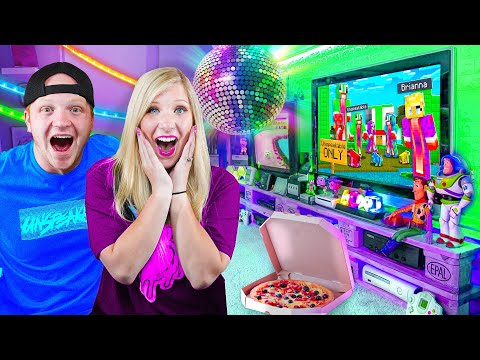 While Arsement’s setup has grown to include lots of high-end gear, you don’t necessarily need any of that stuff to make it big on YouTube. In fact, the most important tool you can buy is probably in your pocket already.

“There’s a misconception that you have to have three monitors in a Sennheiser and a Sony. You don’t,” says Arsement. “I know plenty of really successful YouTubers that film a blog on their iPhone. [The] iPhone has an impeccable camera.”

In fact, Arsement and her crew use their iPhones for their more elaborate multi-person videos (such as hide-and-seek challenges), since each participant can easily film themselves and send the footage to an editor. The YouTuber was also quick to mention a successful gaming colleague who does the bulk of her recording using several iPads.

“You don’t have to have these big fancy things,” says Arsement.