Looking to start your own podcast? Whether you want to catch people up on the day’s news, give them a laugh or take them down a deep true crime rabbit hole, creating a quality audio program is easier than ever these days. If you have a computer and a decent microphone, you’re already a good chunk of the way there.

Still, with so many equipment options out there — not to mention the challenge of figuring out how to actually edit and publish your show — the prospect of starting a podcast can seem a little bit daunting. That’s why we’re here to help. We’ve assembled recommendations for some great gear that will help you start your podcast journey, as well as advice from the experts on producing a truly great show that will keep people listening.

The best mic for the money: Blue Yeti microphone ($99.99; bluemic.com)

The Blue Yeti is our pick for the best microphone you can buy, and one that you’ve probably already seen in your favorite YouTuber or podcaster’s setup. This massively popular USB mic works instantly with just about any PC or Mac, and offers the clearest vocal quality of any microphone we’ve tested at this price while also edging out more expensive options. Its four recording modes also make it ideal for various types of podcast setups, with options for precisely picking up a single voice up-close as well as capturing an entire room full of people.

This may sound obvious, but you should be wearing headphones when you record a podcast. This will prevent unwanted echo from your speakers bleeding into your microphone and will allow you to monitor your own voice while you chat with a guest over Zoom or Discord.

You don’t need anything fancy, either. A cheap pair of earbuds like the $50 Logitech G333 — which come recommended by YouTuber and podcaster Steve Saylor — will more than get the job done. If you prefer traditional headphones, a pair such as the Razer Kraken X (our favorite budget gaming headset) or the Beats Solo 3 (our top pick for on-ear headphones) will also do the trick. Just record with a wired pair of headphones if you can, as this will help you avoid latency, interference and a dead battery in the middle of an important interview.

Lots of podcasts have a video component these days, and if you want to be seen as clearly as you’re heard, the Logitech C920s is as good as it gets for the money. Our pick for the best webcam you can buy, the C920s delivers excellent, true-to-life 1080p video quality even in not-so-great lighting conditions, and works out of the box with pretty much any type of computer. Those willing to invest in more vibrant, smoother-looking video should consider the Logitech StreamCam, but the C920s will get the job done for most folks.

While your phone will work in a pinch, you’ll want to consider a premium portable recorder like the Tascam DR-100MKIII if you do lots of interviews on the road. This recorder features two built-in stereo microphones designed to capture professional-grade sound with minimal background noise, and has XLR and TRS inputs for connecting your own microphone.

For Danny Peña, host of the popular Gamertag Radio podcast and Podcast Hall of Fame inductee, the Tascam DR-100MKIII is his go-to for capturing quality interviews at events and also serves as a backup for recording himself when his computer goes down.

“Music artists, actors, execs, developers… I did everything with this recorder,” says Peña.

You’ll obviously want to record your podcast in as quiet a space as possible, but that’s not always easy if you live in a noisy area or are surrounded by bare surfaces (like walls and windows) that can cause sound to bounce around.

You can combat this with some soundproofing — even something as simple as putting a rug down will help, though buying foam panels for your walls can also go a long way. Peña recommends the Elgato Wave Panels, which are a set of six sleek hexagonal panels that also include all the adhesives and tools you need to hang them on your wall. There is also an array of cheap foam panel options available on Amazon.

Unless you’ve got access to a fancy standalone mixer, there’s a good chance you’ll be recording and editing your podcast on a computer. And whether you’re due for an upgrade or just need a laptop for podcasting on the go, the latest MacBook Air (our favorite MacBook) and Dell XPS 13 (the best Windows laptop we tested) both fit the bill extremely well.

Both of these computers have plenty of power for handling a basic recording and editing workload, with the newest MacBook Air packing Apple’s insanely fast M1 processor and the Dell XPS 13 powered by Intel’s zippy 11th Gen Intel Core chips. The MacBook Air’s included GarageBand software is perfect for recording and editing right out of the box, while the XPS 13 has access to the many great free tools out there for Windows (including the highly popular Audacity app). Both of these laptops will get you long battery life and have slim and light designs that are especially travel-friendly for recording on the road.

Podcast tips from the pros

Work with the gear you can afford

While the gear we’ve outlined above is a great baseline for getting quality audio and video, you don’t need to spend much money (or any at all) to get your podcast started. According to several pro podcasters we spoke to, getting your content out there with whatever equipment you have handy is one of the most important parts of figuring out how to make a great show — not spending a ton of cash on fancy equipment.

“Create content with whatever equipment that you have at the moment,” says Peña. The veteran podcaster’s origins are as DIY as it gets — he recorded his first shows using everything from cassette tapes to the original Xbox’s built-in voice chat and his laptop’s integrated microphone before eventually upgrading to better gear for both on-location and at-home recordings. Those early recordings served as the starting point for Gamertag Radio, which currently has millions of lifetime listeners and has attracted guests from all over the gaming and entertainment industry.

“If you have the content, [even] if it’s recorded through your phone [or] built-in mic and people are liking it, that’s all that matters at the end of the day,” says Peña.

“Don’t overthink it. Get something that works,” says Matt Saincome, co-founder of popular satire website The Hard Times and co-host of The Hard Times Podcast. “You need to get a baseline standard of quality where it can’t sound worse than a Zoom call. Do a quick Google search for a podcast mic, buy one, ask a friend who has a podcast that sounds good.”

Learn how to record, edit and publish

Having a good microphone helps, but your podcast won’t reach anyone’s ears until you’ve learned how to record, edit and get it out to the world. Fortunately, there are lots of free and affordable tools out there for doing just that.

Peña does the majority of his editing on GarageBand, the free audio production app included with every Mac. He also recommends Audacity for editing, which is free on both Windows and Mac. If you’d rather not fiddle with volume sliders to find the right mix between multiple voices, there are tools such as Levelator and Auphonic (both of which are free to try) that will balance things out for you.

If you’re recording remotely, properly helping your guests get set up is key.

“It’s really important to let the guest know like, hey, you need to have headphones on, you need to be using Google Chrome, we use a thing called Riverside, and you need to know that you’re also going to be on video,” says Saincome. “Also, [give] pretty clear instructions on the amount of time that they need and the sort of environment that they should be in.” For example, it’s probably for the best if your guest calls in from a quiet room rather than their backyard.

Once you’re ready to publish your podcast, Peña recommends services such as Libsyn, Blubrry and Audioboom. These hosting services generally range from $5 to $40 a month based on how much you plan on publishing (sometimes with a free trial available), and allow you to upload your show once and have it sent to all of the major platforms including Apple Podcasts, Spotify and Overcast.

Don’t overthink it and learn as you go

Parris Mayhew Hangs Out With The Hard Times 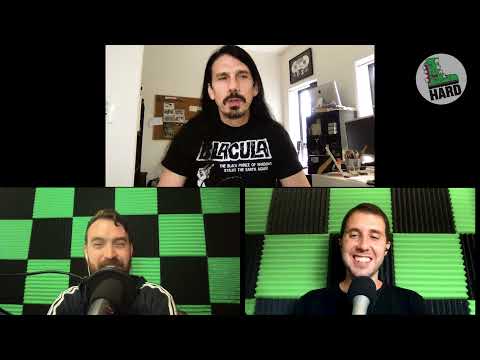 You’re not going to learn how to create a great show without lots of trial and error along the way, which is why the podcasters we spoke to recommend just getting out there and doing it.

“My advice for people starting any form of content is to not overthink it and to get out there. I think of everything as an experiment and then [you] double down on what works,” says Saincome.

“Make your podcast and then make it again, make it again, make a couple of weeks worth of [it]. Get the process going, the rhythm. It’s really important, I think, whenever you’re doing any content to just get out there, put it out, let the world see it, and then see if it catches on.”

Peña shared similar advice, stressing the importance of getting on a consistent schedule, reviewing your own work and learning how to properly edit — a skill that can also land you gigs working on other podcasts.

“Start small, just be consistent, release your show. Let’s say if it’s every week, stick with that schedule,” says Peña. “Also listen to your show when you release [it], so you can hear your mistakes. If there’s anything that you don’t like now, you know what to do the next time. And also try to learn how to edit on your own instead of trying to hire someone to do it. Because now you could also get opportunities to work on other shows too — and get paid.”

Be nimble and find your niche

While it’s important to get out there and start creating, Saincome also recommends not being afraid to pull the plug and start over if something isn’t working.

“I think that most things that are very popular, get popular pretty quick, and I don’t think that you should really grind it out if your goal is just to become popular and well known,” says Saincome.

Whether it’s a personal passion project or something you plan on turning into a career, podcasting is something you should ultimately do because you enjoy it, says Peña.

“At the end of the day, have fun with it man,” says Peña. “I’ve been a content creator for 20 years and still to this day, I’m having fun.”