About two or three hundred protesters gathered on the sidewalk outside of Uber’s SF headquarters. A small band played as the crowd chanted “Drivers united will never be defeated.”

There were helicopters, a strong police presence and a lot of media on the scene. Passing cars with both Uber and Lyft placards honked as they drove by.

Organizers used a megaphone to deliver their grievances to Uber and said they'd be back if the ride sharing company doesn't speak with them today.

The second rally of the day in New York City has a lot of press and television cameras. But it looked like fewer drivers were in attendance than the first rally.

I asked one driver why he thought more didn't show up:

Another driver, however, told me that "the point is not more people" and that some drivers may be satisfied with what they make. The ones in attendance, he says, were fighting for all drivers.

The New York Taxi Workers Alliance -- the driver's group that organized the 1pm ET rally in New York City outside Uber and Lyft's Long Island City offices -- attempted to reach drivers through robocalls, like this one. That's in addition to other efforts, like social media posts, to get out the word.

But it can be difficult to convince drivers to give up hours of work, especially when workers are already struggling to make ends meet.

NYTWA executive director Bhairavi Desai told those in attendance that "it takes so much courage for working people to go out on strike." 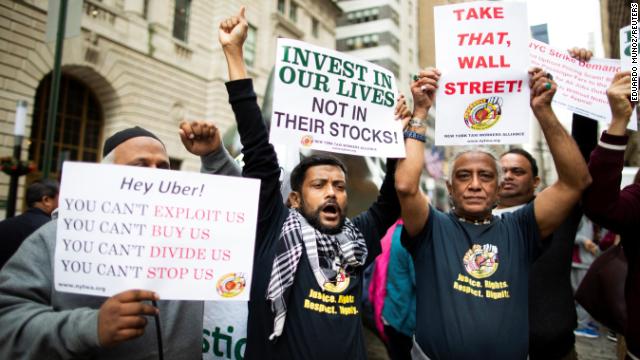 Around 500 fewer Uber drivers were on the road this morning in New York City, according to an Uber spokesperson.

The busy morning commute hours -- 7am to 9am EST -- is when NYC drivers were expected to strike as part of an international protest against Uber and Lyft on Wednesday.

But according to an Uber spokesperson, it made hardly a dent on Uber's service. Just 500 drivers is less than one percent of its drivers in the area, according to Uber.

I ordered an Uber this morning during the strike to see how long it would take to get a driver. My driver came in about 6 minutes. I asked him why he wasn't striking.

In his words, he “doesn’t have time” to strike. He added that he didn't think it would help.

There are two planned rallies outside of Uber and Lyft's (LYFT) offices in Long Island City today.

The first, happening now, is being held by the Independent Driver's Guild, a Machinists Union affiliate that represents over 45,000 for-hire vehicle drivers in New York City.

The messaging from IDG, which receives some funding from Uber, is that it is rallying in solidarity with drivers across the country who are fighting for fair wages.

New York City implemented a first-of-a-kind minimum pay for drivers on February 1. Under the new policy, all drivers will earn a minimum take-home pay of $17.22 per hour, or $27.86 before expenses.

One of the organizers at the IDG rally said that "everyone in the country" wants to have a pay floor implemented and the rally is intended to help push for that.

You have to give up something to get something."

Stevens says he's been driving for the companies for three years and "to some level" things have changed for him since the new minimum wage law kicked in. He's taking time off work today to rally on behalf of other drivers around the country.

The next rally, organized by the New York Taxi Workers Alliance, is slated to start at 1 pm.

For more on why drivers are striking, read this. 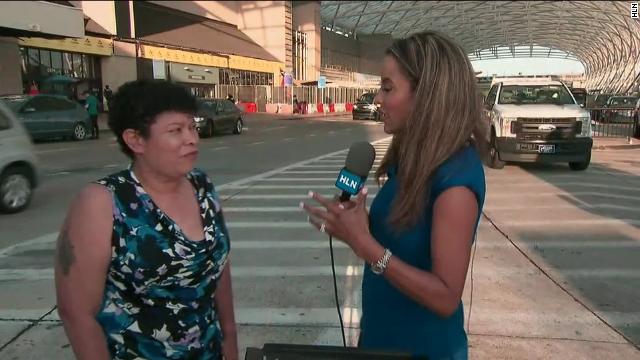 Stella Lawson, a part-time Lyft (LYFT) driver who is helping organize a strike with Uber workers in Atlanta today, said job stability and safety concerns are at the top of the list for protesters coming together against both companies.

"My main concern is there’s no job security for these drivers. There’s constant pay cuts," she told HLN's Shyann Malone.
"We got safety issues ... Drivers are being attacked."

Like others protesting in cities across the globe, Lawson said drivers have seen their pay decline, not improve, over time.

"It feels like the company has used its drivers," she added.

"As the company started succeeding and making money, instead of pay going up, the pay goes down." 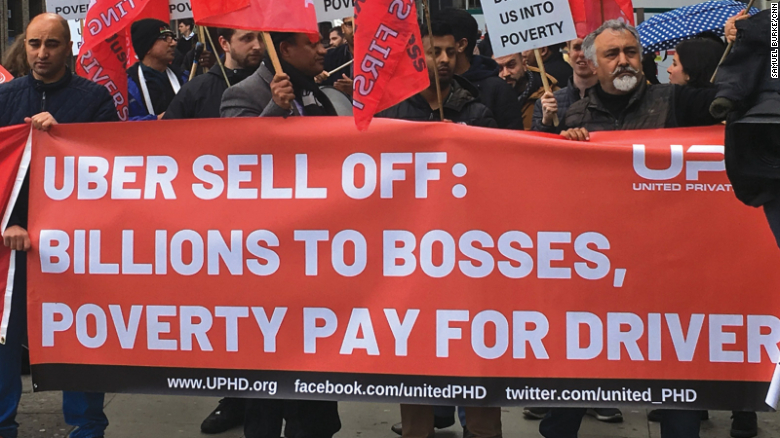 Uber has long been criticized for its handling of drivers, who often quit within a few months, according to research.

But the company has made efforts recently to be responsive to them.

In November, Uber announced a loyalty plan in the United States that offered perks, ranging from extra pay and free online education to dent repair and gas discounts.

Uber Pro — which debuted in seven cities and all of New Jersey — let drivers earn points from rides to qualify for four different tiers of status.

Drivers in the top two tiers were eligible to receive a 3% or 6% pay boost, and also get tuition coverage for themselves or a family member at Arizona State University's online program.

The program was designed to help retain drivers, who are independent contractors so they do not receive benefits such as health care.

"If you're putting in thousands of rides, have a high rating and have been loyal, there hasn't been a financial reward."

Uber drivers are parking their cars along the street where the ride-sharing company’s London headquarters are located, forming a sea of Toyota Priuses and Hyundais with flashing lights.

Several workers who spoke to CNN Business today said they were there to protest their wages after feeling undervalued for years.

"It’s simple," said Mohamed Mia, who has worked as an Uber driver for nearly six years.

"I want increase in the fare and for them to reduce commissions. I have to work between 70 and 80 hours a week, and this is just too much for one person."

Mohammad Onupom Rahmen, a 47-year-old London driver, told CNN Business he has seen his hourly pay drop over the last several years, even as he's taken on longer shifts.

He quit his job at Marks & Spencer four years ago because of the flexibility Uber offered, but has now turned to working longer hours to make ends meet.

“I have to work harder to earn the same,” he said. “Now I have to work late nights, [because] when the traffic [moves] faster, I can drive faster and make more trips.”

Driving for Uber is Rahmen’s main source of income, which he uses to support his wife and two children in London, as well as family that's still in Bangladesh. 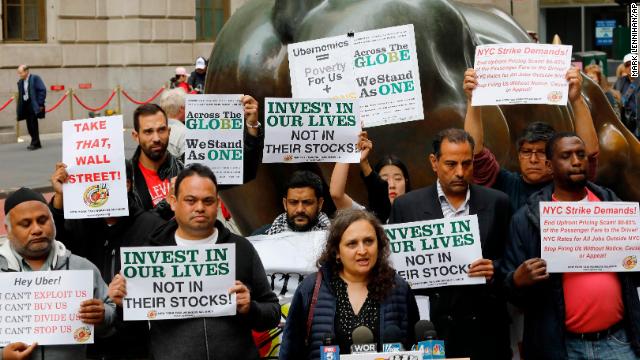 She said today's strike is "just the beginning," and claimed that tens of thousands of Uber and Lyft (LYFT) drivers are striking.

Striking is the hardest thing workers do and it's when you really feel your power," Desai said.

She added that ride-hailing apps should "take notice because we are able to do this in their biggest market [New York] in just five days."