When it comes to recession indicators, nothing it quite as good as a US Treasury 2-year/10-year yield curve inversion. Since 1978, every time the 2/10 curve has inverted, recession has followed.

That's not good news for the US economy. The 10-year reached highs of 3.04% today following the red-hot June inflation report and 2-year yields rose by 3.17%. deepening the current inversion to its widest spread in 22 years.

Bank of America economists also said they expect the US to enter a "mild" recession this year.

But that doesn't necessarily mean a recession is right around the corner: The shortest inversion-to-recession period was 158 days, before the 2020 recession. The longest was 1,010 days, ahead of the 2001 recession, according to analysis by Jack Hersch at S&P Global Market Intelligence.

US stocks closed lower on Wednesday after a key inflation metric showed that prices increased over the year ended in June at the highest rate since 1981.

While most financial institutions still predict a rate hike of 75 basis points, the market is currently pricing in a 81% probability that the central bank will increase interest rates by 1% later this month. That would be the largest hike in the modern era.

Bank of America analysts predicted a "mild" recession is coming to the US.

Atlanta Federal Reserve President Raphael Bostic signaled on Wednesday that the US central bank may need to take even more drastic steps to get inflation under control.

“Everything is in play,” Bostic told reporters, according to comments reported by Reuters and confirmed to CNN by an Atlanta Fed spokesperson.

The Fed raised interest rates last month by three-quarters of a percentage point, the biggest hike since 1994.

Markets were somewhat cheered by Bostic's statement. The Dow was down only 75 points after tumbling about 400 points at the open. The S&P 500 was slightly higher, and the Nasdaq rose 0.4%.

In an interview with CNN, Bernstein emphasized that Wednesday’s inflation report, which showed prices spiked by the most since 1981, does not capture the cooling off of energy prices in recent weeks.

“Today’s report does not reflect the full impact of nearly a month of decreases in gas prices,” Bernstein said, noting that the national average for regular gasoline is down by nearly 40 cents a gallon. “Those savings at the pump do not reverse the experience American households are facing, but they sure give people a little bit of breathing room.”

The Biden official also called out lawmakers for failing to act on the president’s agenda, including passing a bill to fund US manufacturing of computer chips.

“It seems unconscionable not to pass a bill that would increase domestic production of microprocessors, especially because it’s something that everyone agrees on,” Bernstein said. “This is the time for Congress to get out of the cart and push, not point fingers.”

President Joe Biden remains confident in the Federal Reserve’s ability to get inflation under control even as the cost of living continues to spike, according to White House economist Jared Bernstein.

“The president obviously had great faith in members of the Fed board that he renominated and those added. Our faith in that team remains as strong as ever,” Bernstein told CNN in a phone interview.

In November, Biden renominated Jerome Powell to serve as chairman of the Fed. Powell was originally nominated in 2017 by former President Donald Trump.

“There is a lot of chin-stroking punditry... I’m not going there,” he said.

Bernstein noted that the No. 1 point in Biden’s inflation-fighting agenda is respecting the independence of the Federal Reserve.

“History is littered with presidents interfering with Fed rate hike cycles,” he said, hinting at the infamous Fed-bashing by Trump. “This president has committed to stay out of that knitting.” 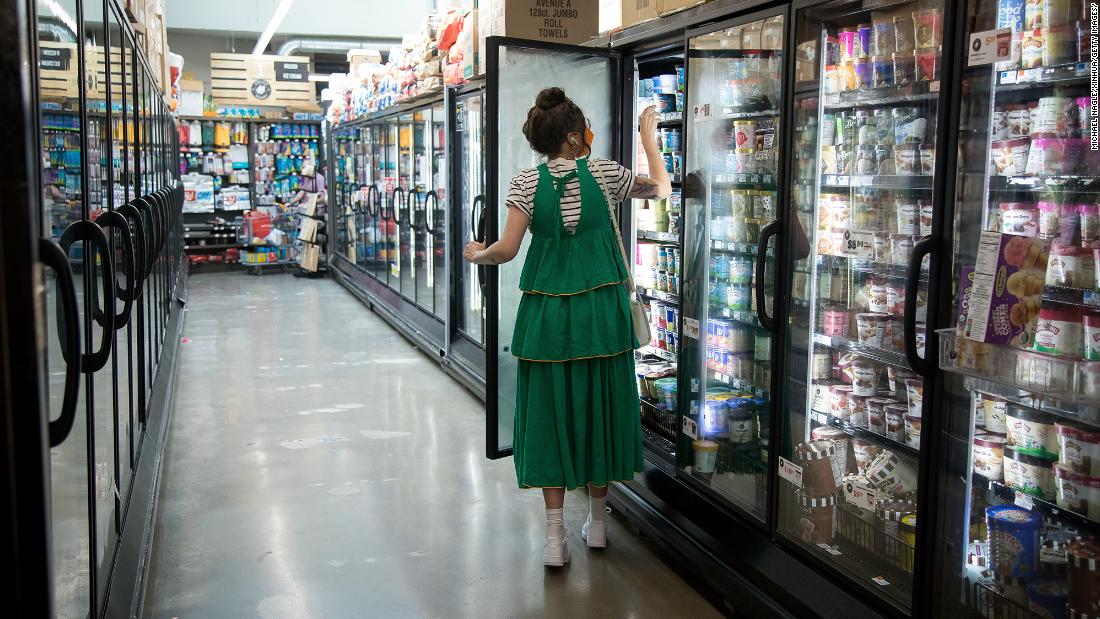 Food prices are still on the rise. In the 12-months ending in June, overall food prices rose 10.4%, the biggest annual increase since February 1981, according to data released Wednesday by the Bureau of Labor Statistics.

Grocery prices jumped 12.2% in the year ending in June, not adjusted for seasonal swings. In that period, nearly every individual item got more expensive, with some categories seeing dramatic increases. Eggs spiked 33.1%, flour jumped 19.2% and chicken went up 18.6%. Milk got 16.4% more expensive, and fruits and vegetables were 8.1% pricier.

Bank of America is calling for a “mild” recession, not a more dramatic collapse like the Great Recession that began in late 2007.

Real GDP is expected to decline this year by 1.4%, before rebounding by 1% next year, Bank of America said.

The unemployment rate is projected to jump from the historically-low level of 3.6% today to 4.6%. However, that would be well below the April 2020 peak of nearly 15%.

By the end of next year, Bank of America expects the Federal Reserve to reverse course and begin cutting interest rates following a string of aggressive rate hikes aimed at taming inflation.

Other economists are more optimistic.

Goldman Sachs said this week the risk of a recession over the next year stands at just 30%, although it rises to nearly 50/50 odds over the next two years. The Wall Street bank said that despite market fears of an imminent recession, “We are doubtful that the economy is already in a recession.”

The American economy is slowing more rapidly than feared because of high inflation. A recession is likely later this year, Bank of America warned on Wednesday.

This marks the first time Bank of America is outright forecasting a downturn since the pandemic erupted in early 2020. A growing number of major banks are predicting a recession this year or next, although others argue the US economy can still experience a “soft landing.”

“Momentum in the domestic economy clearly appears to be slowing. The inflation tax is taking out the ability of households to spend on discretionary items at a fast clip,” Bank of America economist Michael Gapen told CNN in a phone interview.

The Bank of America recession call was made prior to Wednesday���s worse-than-feared inflation report. Gapen said the consumer price index, which spiked by the most since November 1981, gives him a “little more” confidence that a recession will happen because it shows how broad the inflation problem is.

“You can’t say this is just an energy story,” he said.

US stocks took a hit this morning after a key inflation reading showed that prices continued to surge in June.

The data added to investors' fears that the Federal Reserve will get more aggressive in its fight to tame inflation.

The market is currently pricing in a 44% probability that the Federal Reserve will increase interest rates by 1% later this month. That would be the highest hike in modern history.

Still, stocks bounced back as they approached midday: