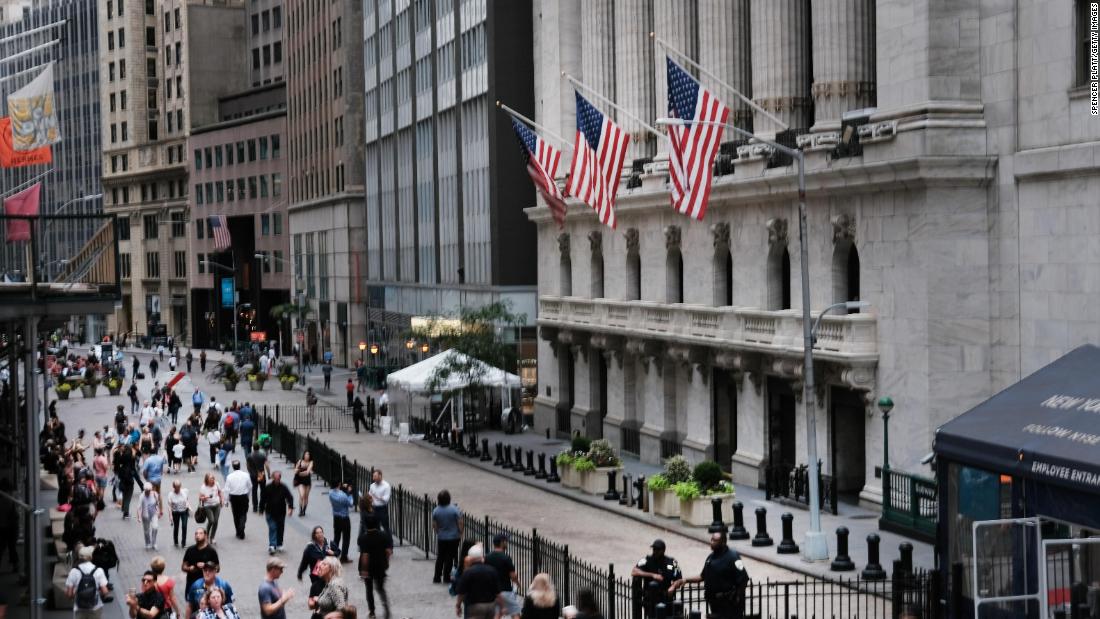 US stocks finished higher on Wednesday, after the Federal Reserve cut interest rates for a third time in a row.

GE (GE) was the best performer in the S&P, closing 11.5% higher on the back of better than expected earnings. 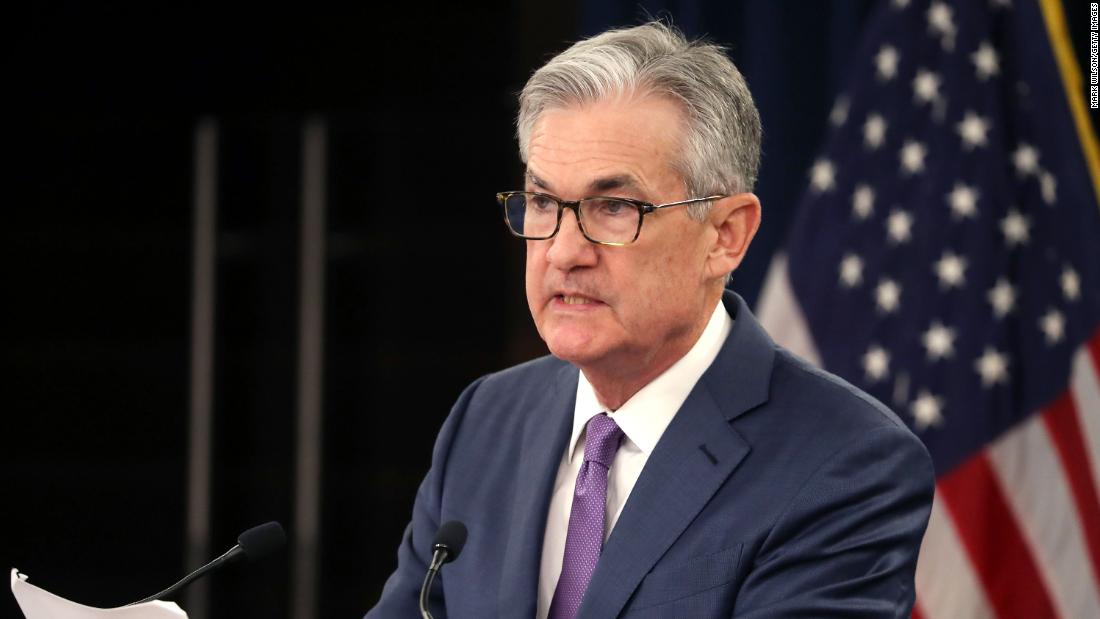 In an interview after the rate cut was announced, Federal Reserve Chairman Jerome Powell defended cutting interest rates by a quarter point this month rather than waiting until December.

"I strongly believe this was the right action," he said in response to a question from CNN's Donna Borak, adding that there was a strong vote in favor of the move. Indeed, only two of the Fed's seven governors voted against the cut.

Some market participants wondered whether the solid, albeit slowing, the GDP data report from earlier in the morning could sway the central bank's decision for a cut. That said, market expectations had been above 90% ahead of the meeting. 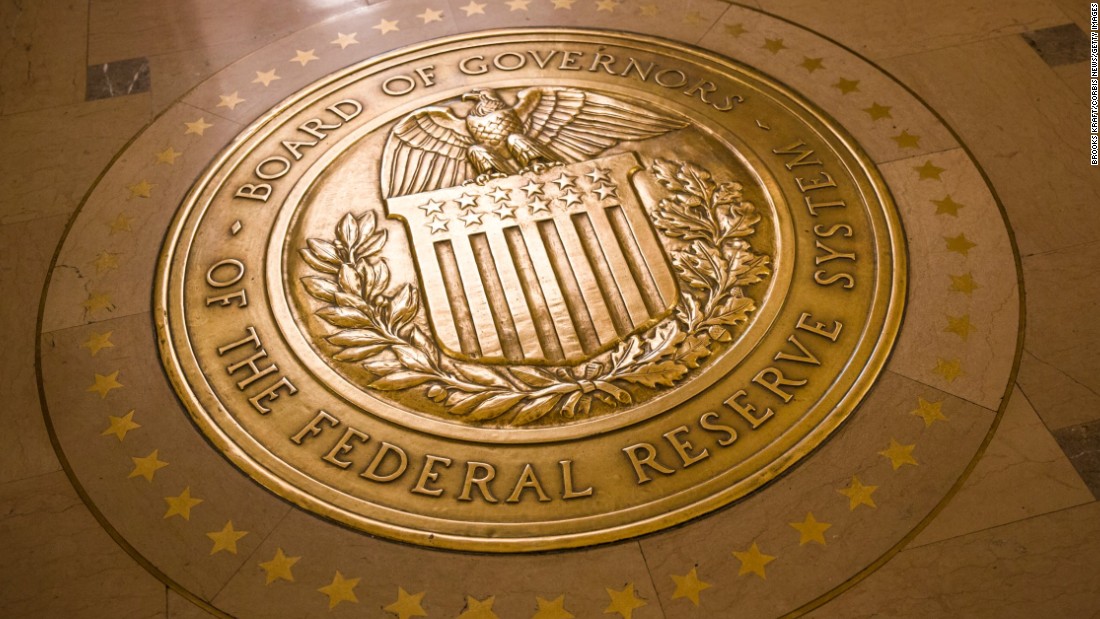 After cutting interest rates for a third time in a row, Federal Reserve Chairman Jerome Powell said the central bank's policy is now well positioned for its economic outlook.

Powell said Fed policy is appropriate for the situation at hand during the press conference following the policy update. It would take a "material reassessment of our outlook," to change policy again, Powell said.

The central banker pointed at muted inflation pressures and a strong labor market, along with weakness in global growth and trade trouble that have been weighing on the economy.

Stocks were flat to slightly lower as Powell spoke. 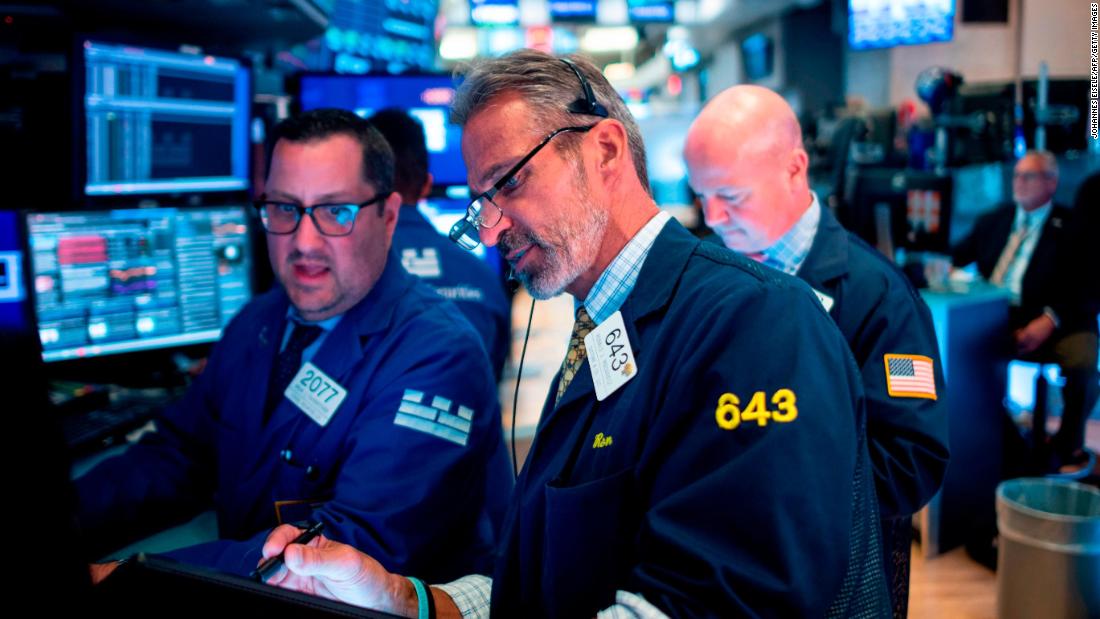 US stocks remained in the red after the Federal Reserve announced its third consecutive interest rate cut of the year.

The rate cut was already priced into the market, which is likely why it didn't garner much of a reaction.

Investors will now turn to the press conference with Fed Chairman Jerome Powell, which will begin at 2:30 am ET. 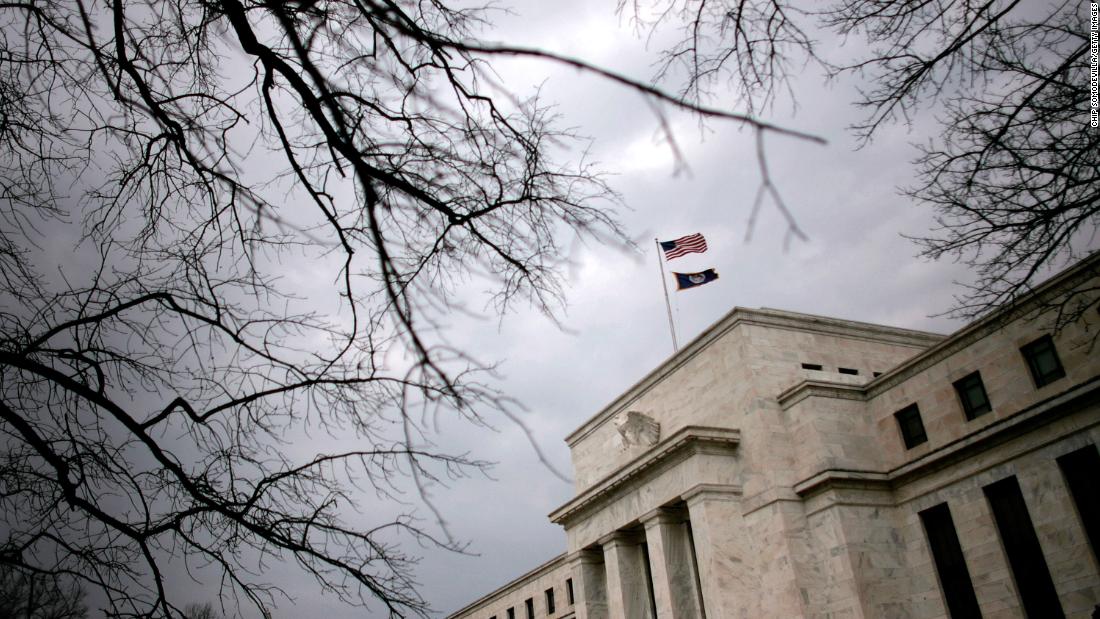 The Federal Reserve cut interest rates for the third time this year as the US economy continued slowing amid ongoing trade disputes and weak global growth.

The federal funds rate, which affects the cost of mortgages, credit cards and other borrowing, will now hover between 1.5% and 1.75%.

It isn’t clear whether the move will be enough to head off another rate cut in December, the final meeting of the year. Federal Reserve chairman Jerome Powell is set to speak at a press conference later Wednesday afternoon. 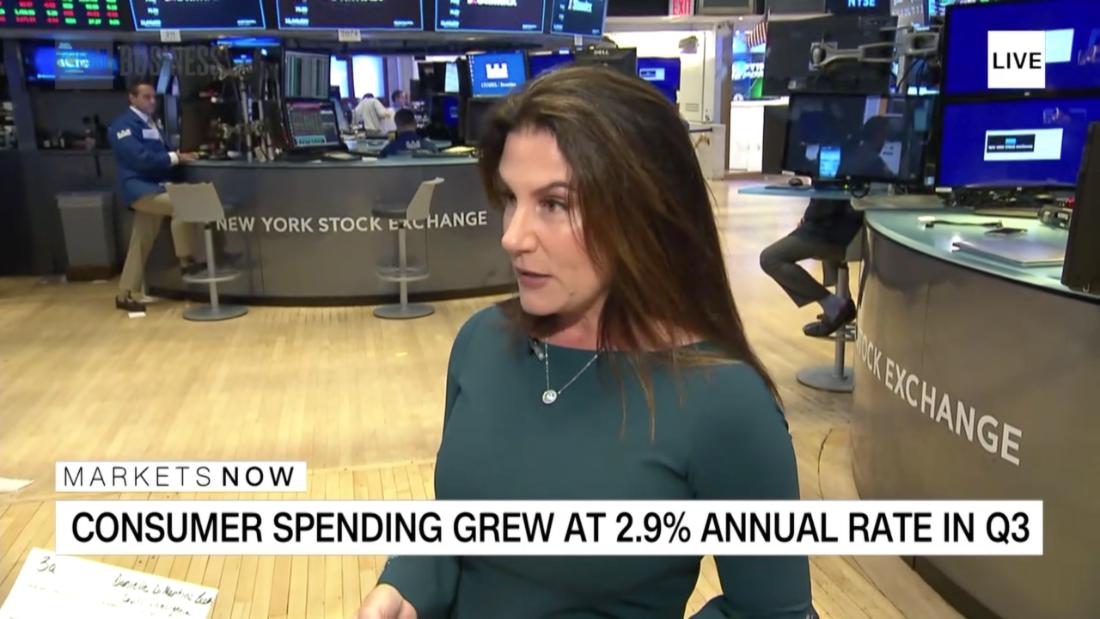 With the US economy showing solid, albeit slowing, economic growth in the third quarter, market participants are debating whether another interest rate cut is really necessary. But in spite of some pockets of strength, the Federal Reserve action really is needed, said Danielle DiMartino Booth, CEO and chief strategist at Quill Intelligence on CNN Business' digital live show Markets Now.

"Everything will depend on the press release today," she said.

Fed Chairman Jerome Powell could lean on the evidence from this morning's GDP report showing that the American consumer is still strong, said DiMartino Booth.

But strong consumer spending or not, a rate cut today is indeed necessary, DiMartino Booth said. "There are signs that unemployment is ticking up," she said, and other areas of the economy are showing weakness. The manufacturing and mining sectors have faced job cuts, for example. and the jobs numbers will be something to pay attention to in Friday's jobs report, she said. 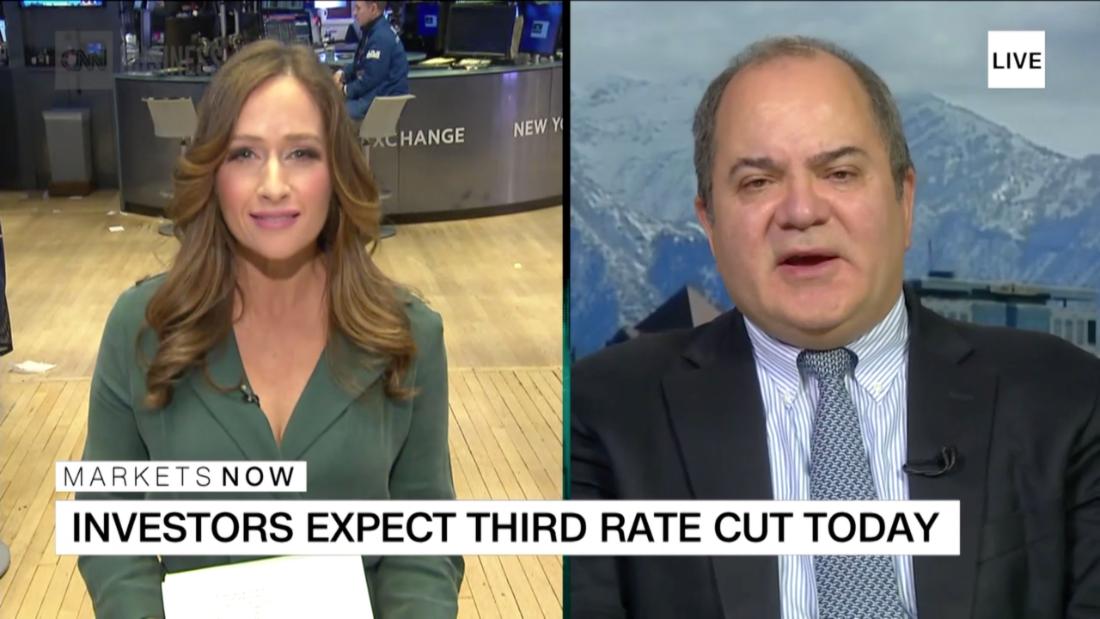 With only about an hour to go until the Federal Reserve publishes its monetary policy decision, investors are expecting another interest rate cut.

The cut -- the third one in a row for the US central bank -- will mostly be for insurance, rather than meaning that the economy "is in a bad way," Stoltzfus said.

Another cut would turn the market's attention back to the trade war.

"If we get a cut today, we'll have to see what happens with the meeting between Trump and Xi," Stoltzfus said.

President Donald Trump and China's President Xi Jinping were set to meet and sign a "phase one" trade agreement reached earlier this month at the APEC meeting in Chile. But the South American country said today it would no longer host. 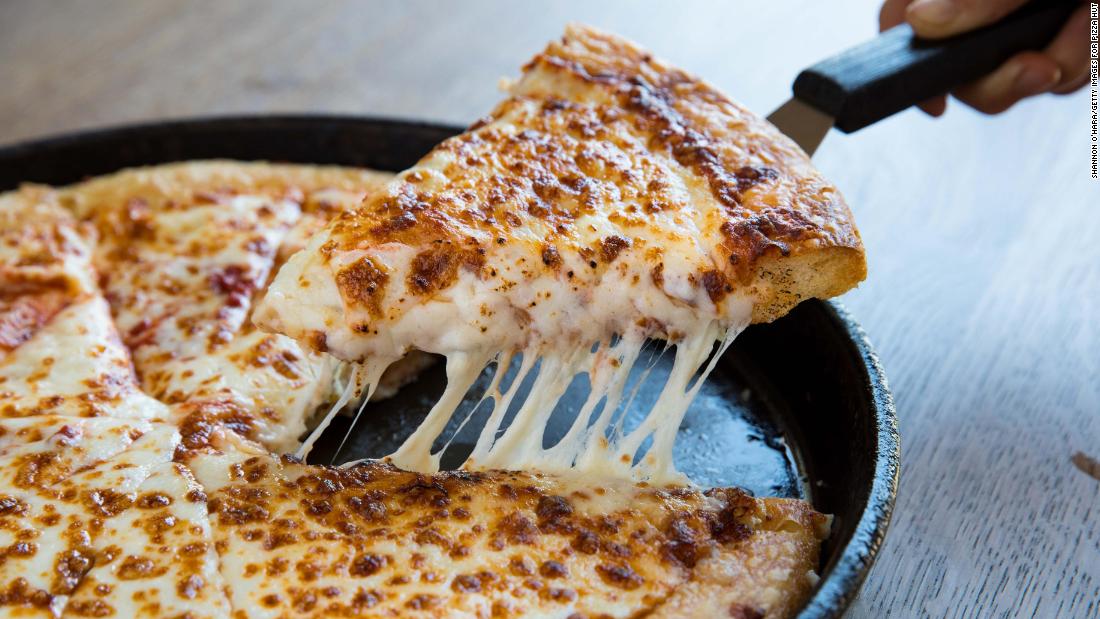 Yum said in its latest earnings report Wednesday that it incurred a $60 million pre-tax expense tied to its GrubHub investment, a charge that lowered Yum earnings by 15 cents a share.

Yum has other problems, though: Pizza Hut's comeback has stalled.

The chain had put up impressive sales growth numbers recently, tied in part to its official sponsorship deal with the NFL. That deal, now in its second year, was inked after the NFL parted ways with troubled Papa John's (PZZA) last year.

But Pizza Hut's same-store sales, which measure how restaurants open at least a year are doing, were flat in the quarter. That bad news, coupled with the hit from GrubHub, was more than Yum investors could stomach. Shares plunged nearly 10% Wednesday. 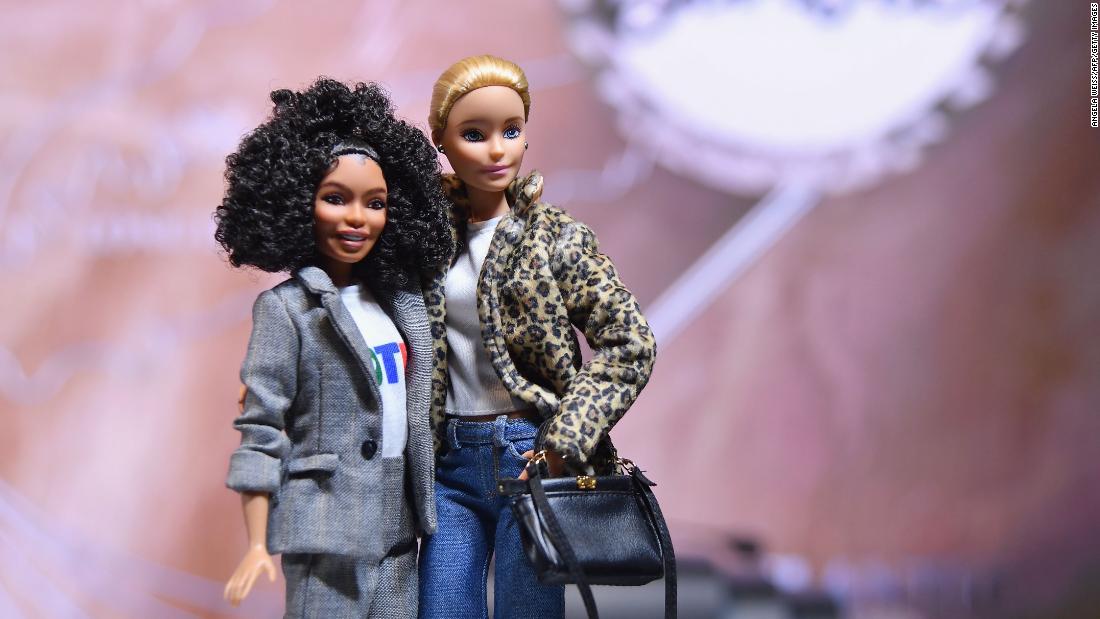 Shares of toy giant Mattel (MAT) surged nearly 20% Wednesday after the Barbie and Hot Wheels maker reported sales and earnings that topped forecasts and a bullish outlook for the holidays.

That wasn't the only good news. Mattel also said it concluded its internal review of a whistleblower allegation of accounting irregularities. The end result: Mattel said it did understate income tax expenses in the third quarter of 2017 but it also overstated them by the same amount in the fourth quarter of that year. In other words, it was a wash.

Still, Mattel did announce it plans to hire a new chief financial officer and said that current CFO Joseph Euteneuer would be stepping down following a transition period of about six months.

But investors were clearly relieved by the good news regarding sales, especially because of concerns about the demise of Toys "R" Us -- a key retail partner -- and the threat of more tariffs on toys made in China. Rival Hasbro (HAS) has already warned that the tariffs will eat into its holiday quarter profits.

Mattel CEO Ynon Kreiz told analysts Tuesday that the tariffs won't be as big a problem for Mattel. That's because less than two-thirds of its toys are imported from China compared to an industrywide average of about 85%.