The FDIC took over the First State Bank, based in Barboursville, West Virginia, Friday evening, the first time since Feb. 14 that the agency has had to take over a bank.

During the financial crisis of 2008 and 2009, Friday evening announcements of bank failures by the FDIC were a standard occurrence, as 25 banks failed in 2008 and another 140 in 2009. But while this is the first bank failure since the start of the coronavirus crisis in the United States, the agency said the problems at the bank occurred far before the current crisis.

The agency has arranged a purchase of the bank and its deposits by MVB Bank of Fairmont, West Virigina. The four branches of First State Bank will reopen as MVB branches on Saturday. But due to the state’s stay-at-home order, customers are advised to visit the bank only if an in-person visit is essential and they first make an appointment.

The only other bank failure this year was Ericson State Bank in Ericson, Nebraska. 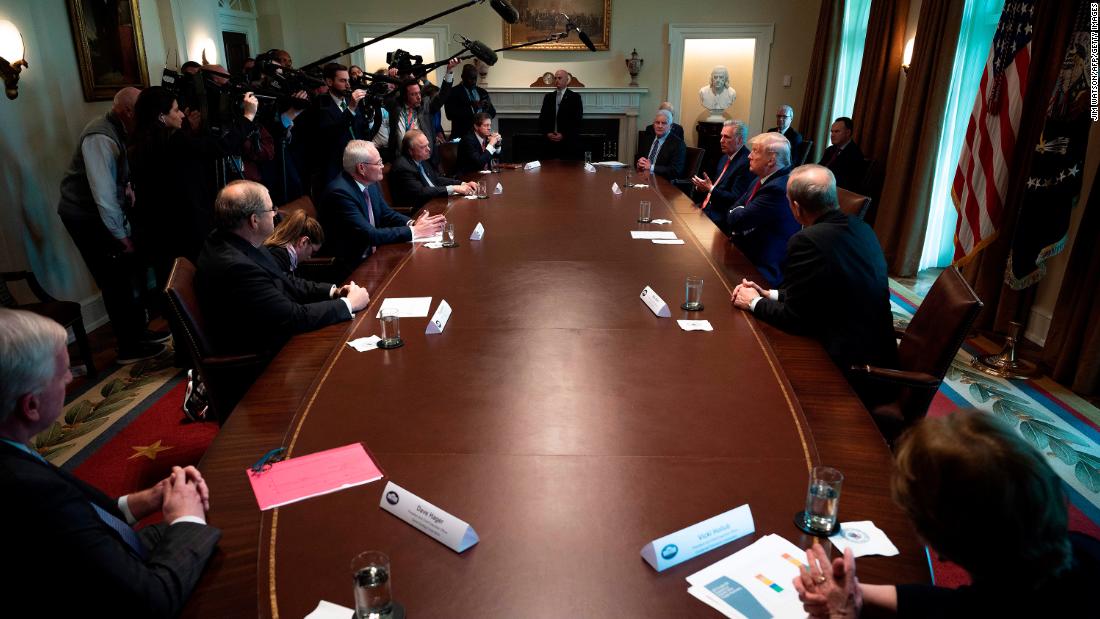 President Donald Trump is once again suggesting Russia and Saudi Arabia will soon reach a truce in their oil war.

"I think President Putin and the Crown Prince want something to happen badly," Trump said Friday, adding that he's spoken to both the Russian leader and Saudi Crown Prince Mohammed bin Salman.

The two countries have flooded the world with excess oil -- despite the unprecedented collapse in demand caused by the coronavirus pandemic.

"It's certainly terrible for them what's happened," Trump said during a meeting with oil executives, including the CEOs of ExxonMobil (XOM), Chevron (CVX) and Occidental Petroleum (OXY).

After touching an 18-year low of $20, US oil prices spiked by a record 32% this week on rising hopes for major production cuts.

"We'll work this out. We'll get our energy business back up," Trump said.

During the meeting, several oil CEOs thanked Trump for his leadership during the crisis.

"You're the right man at the right time to balance all the priorities," David Hager, CEO of Devon Energy (DVN), told Trump. 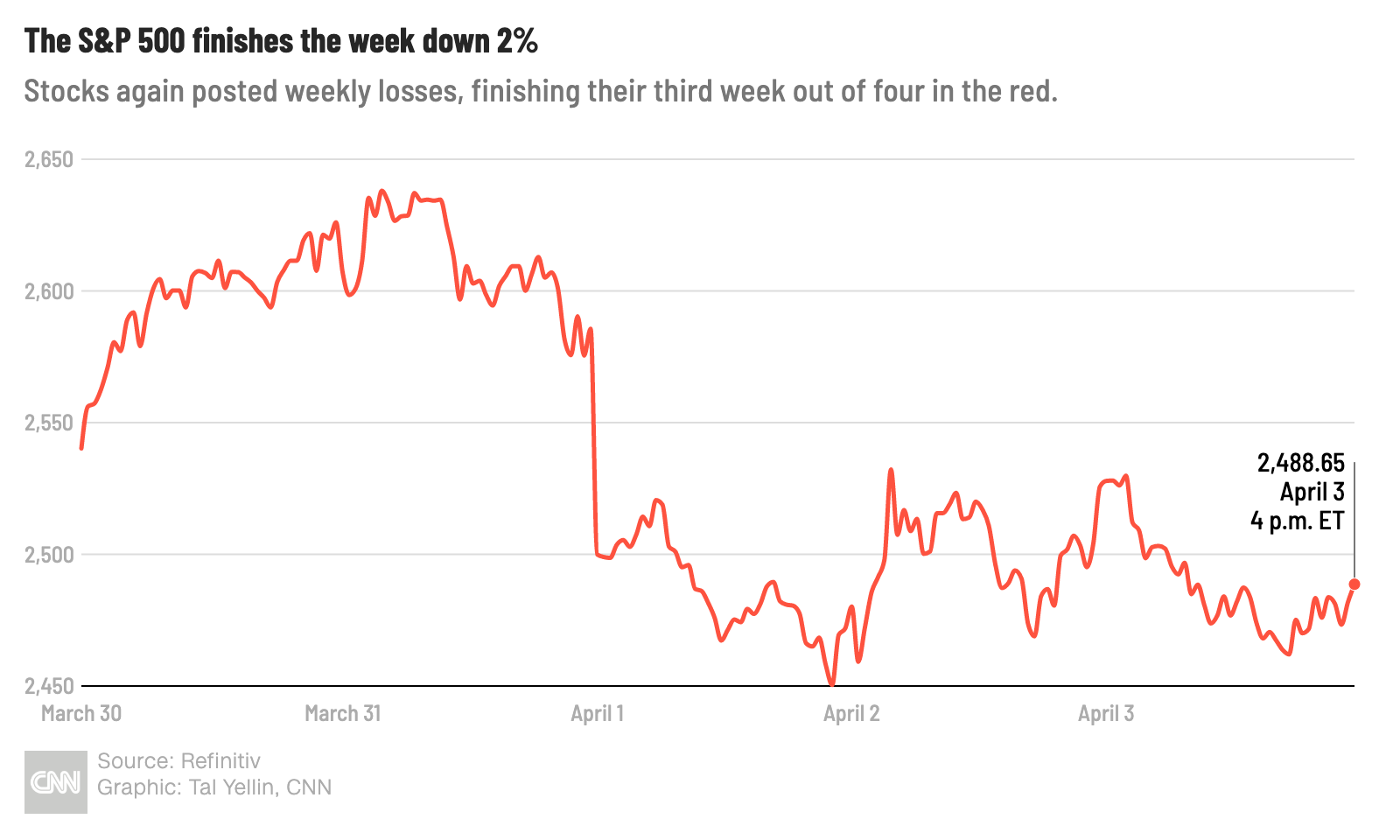 US stocks closed sharply lower on Friday, following a much worse-than-expected jobs report for March.

All three major indexes recorded a loss for the week, making it their third down-week in four.

Acreage Holdings, the US cannabis operator backed by John Boehner and betrothed to Canadian cannabis giant Canopy Growth, has furloughed employees and nixed some M&A deals due to the Covid-19 pandemic.

Acreage announced Friday it temporarily furloughed 122 employees; converted a dispensary in Queens, New York, to a delivery hub; temporarily closed two dispensaries and some wholesale and manufacturing operations; canceled a planned acquisition of a dispensary in Rhode Island and terminated a merger agreement with Deep Roots Medical. The company also announced the resignation of Steve Hardardt, executive vice president.

The company expects to provide an update during its upcoming earnings call that’s scheduled for May 13.

“These bold measures will help to ensure that we emerge from this very challenging situation stronger than ever before,” Acreage CEO Kevin Murphy, said in a statement.

The coronavirus pandemic is starting to noticeably damage economic data around the world.

The global composite output index, produced by JPMorgan and IHS Markit, slumped to 39.4 points in March, its fastest drop in some 11 years. Any level below 50 denotes an economic contraction.

Even though the index had been in contraction territory in the prior month as well -- 46.1 points in February -- the drop off was the second-biggest on record, surpassed only by a drop in October 2001.

But not all countries were hit the same.

China, which was hit by the pandemic earlier in the year, got some respite from its rate of contraction. The outbreak is still sweeping across the United States, where business activity dropped to the greatest extent since the height of the 2007-2009 financial crisis. Still, America saw the weakest downturn among its developed world peers. 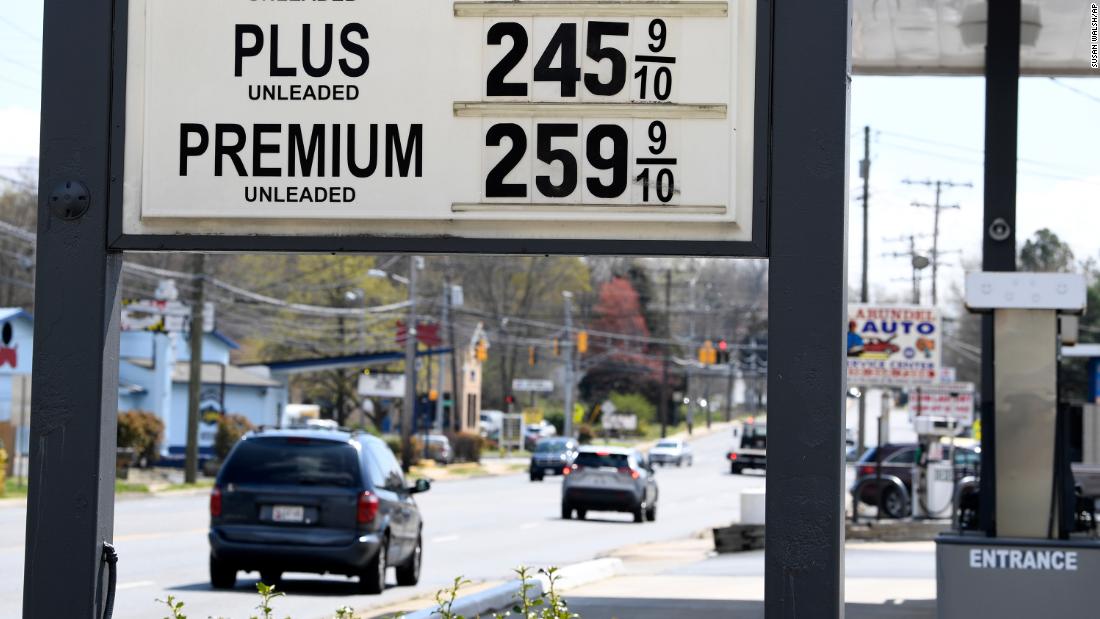 US oil prices skyrocketed by a record 32% this week on relief over signs that major powers could finally restrain production.

Crude surged another 12% Friday to finish at $28.34 a barrel on news that OPEC+ will meet via video conference Monday. The summit, designed to halt the historic collapse in prices, could include other producers outside of the alliance.

The rally added to Thursday's stunning 25% spike after President Donald Trump said he hopes and expects a massive production cut of 10 million to 15 million barrels per day from Saudi Arabia and Russia.

Analysts said Trump's claim is unrealistic because such deep production cuts would need to include other countries, perhaps including the United States.

The weekly spike of 32% is the strongest since oil futures began trading on NYMEX in 1983.

Yet the oil crash has been so deep that crude remains down more than 50% on the year. 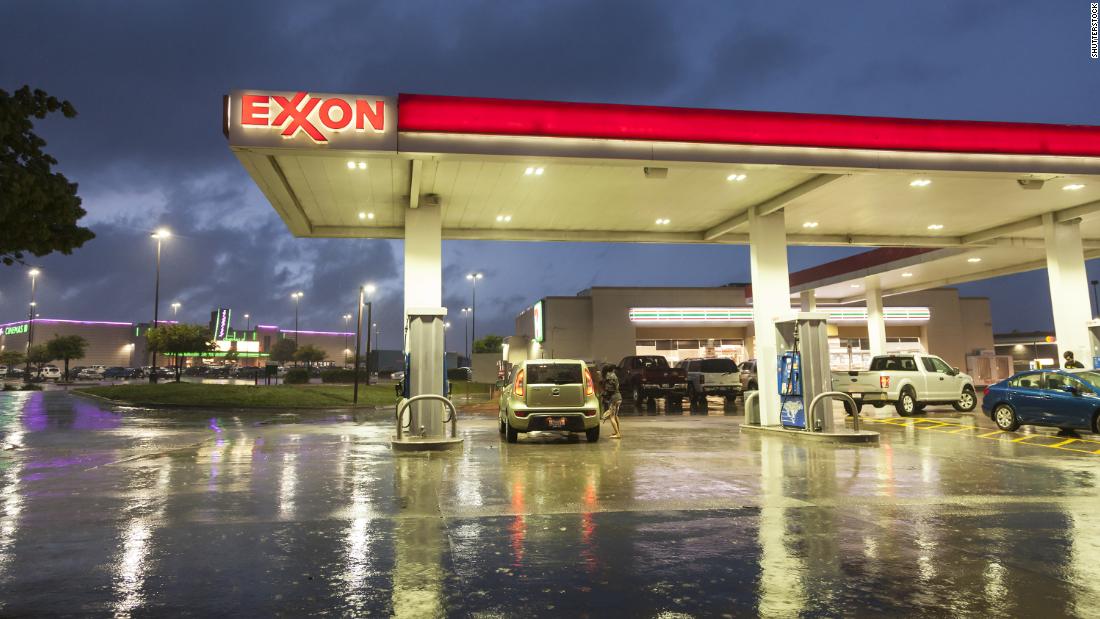 We've already seen how much of a negative impact the coronavirus pandemic has had on the job market and broader economy. Next up? Corporate America will start to report earnings for the first quarter in the coming weeks. The numbers are not going to be good. Scratch that. Let's be blunt. They are going to be awful.

According to estimates from FactSet Research, profits for companies in the S&P 500 are expected to plunge 7.3% in the first quarter compared to a year ago.

The forecast for the second quarter is even more bleak, with analysts projecting a staggering 15.1% drop. That would rival the worst performance for companies since the 15.7% drop during the third quarter of 2009 -- the end of the Great Recession.

Communication services and technology could be among the few bright spots in the market though, thanks to continued expectations for strong earnings growth from the likes of Facebook (FB) and Google owner Alphabet (GOOGL).

FactSet said that analysts are also predicting a more modest drop in earnings for the third quarter of 4.8% and that profits will rebound slightly in the fourth quarter. But considering how rapidly things are changing, those predictions may turn out to be overly optimistic. 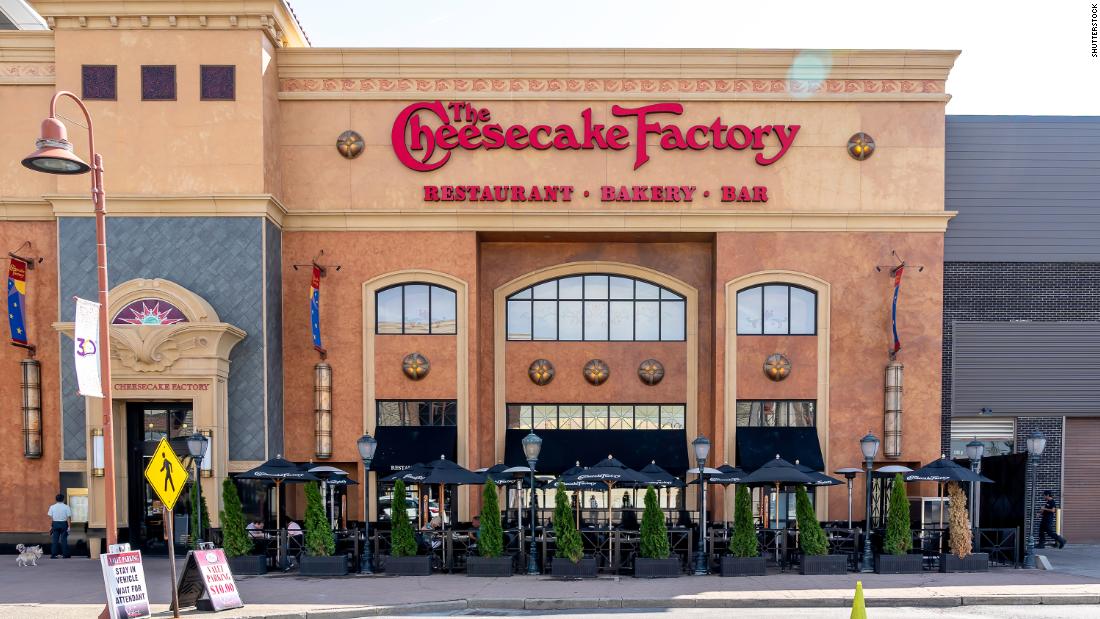 Sales at the Cheesecake Factory (CAKE) fell 46% in March compared to a year ago, the company revealed in a regulatory filing.

The ongoing coronavirus pandemic has forced restaurants to close their dining rooms and quickly pivot to takeout or delivery.

In slightly better news, the Cheesecake Factory said those sales grew 85% compared to its previous quarter. Its restaurants are "operating sustainably at present under this model," the company said. 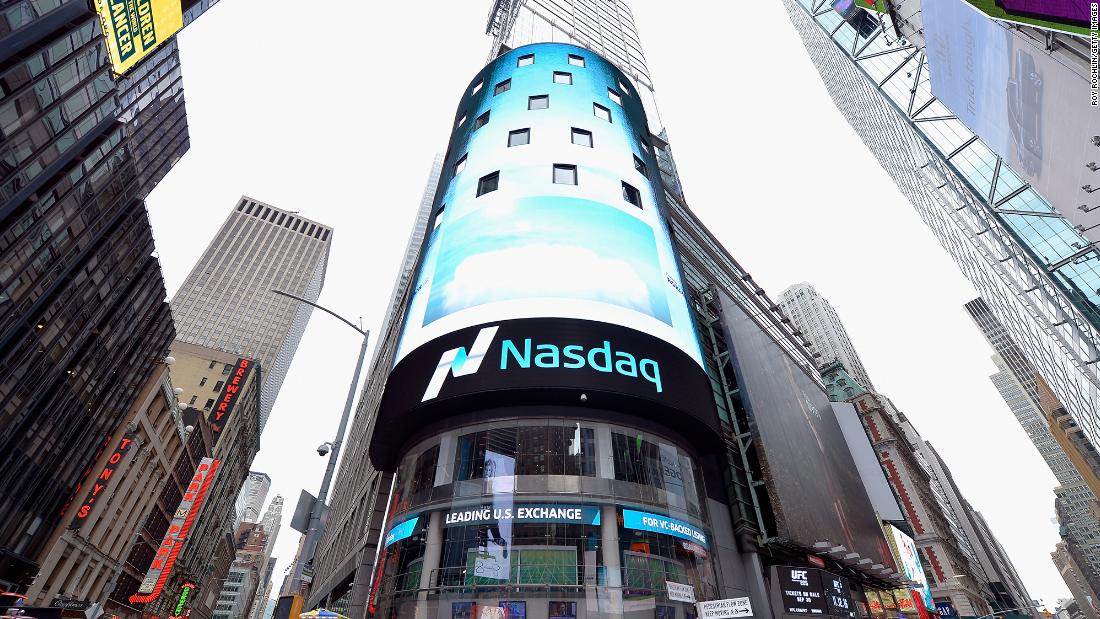 Now here's a brave company for you. Bitoech Zentalis Pharmaceuticals, which is developing treatments for various types of cancer, went public Friday. And it's off to a great start.

Shares of Zentalis (ZNTL), which listed on the Nasdaq, surged nearly 40% to about $25 a share in early trading. And that's after the company raised the size of its offering and priced the IPO at $18 -- the top end of its expected range.

Zentalis is the first IPO of a US-based firm since the coronavirus pandemic ground economic activity in America to a halt and sent the stock market into a free fall.

The IPO market has slowed to a virtual standstill in recent weeks as a result of the Covid-19 outbreak. The only other company to test the public waters in the US lately was WiMi Hologram Cloud, a Chinese augmented reality firm that debuted Thursday. Shares of WiMI (WIMI) have fallen slightly below their offering price.

But it's still unclear whether highly touted US unicorn companies -- firms like Airbnb, DoorDash and Robinhood -- will be able to go public this year.