America's economy is expected to grow by far less this year than most economists expected just a month or two ago. The global coronavirus outbreak is responsible for the damage.

BMO has cut its second-quarter GDP growth estimate to -2% to account for a hit to the US oil industry and the likelihood that parts of the economy could be shut down to control the outbreak. For the full-year, GDP growth is expected at 1%.

This would be by far, the weakest year for the economy since the great recession," BMO chief economist Michael Gregory said in a note Tuesday.

Before the outbreak, the bank expected the US economy would grow by 1.8% this year.

America's employment rate, which is sitting at a historically low level of 3.5%, is also expected to rise. BMO forecasts 3.9% in the second quarter.

With a downturn in the oil industry because of a price war amid oil-producing countries, and a hit to demand, US inflation will likely also remain sluggish. This will give the Federal Reserve the room to cut rates further, Gregory said.

Markets are moving back up on Tuesday as some investors dip their toes back in.

But investors still want to know: Is this a repeat of the 2008 financial crisis? 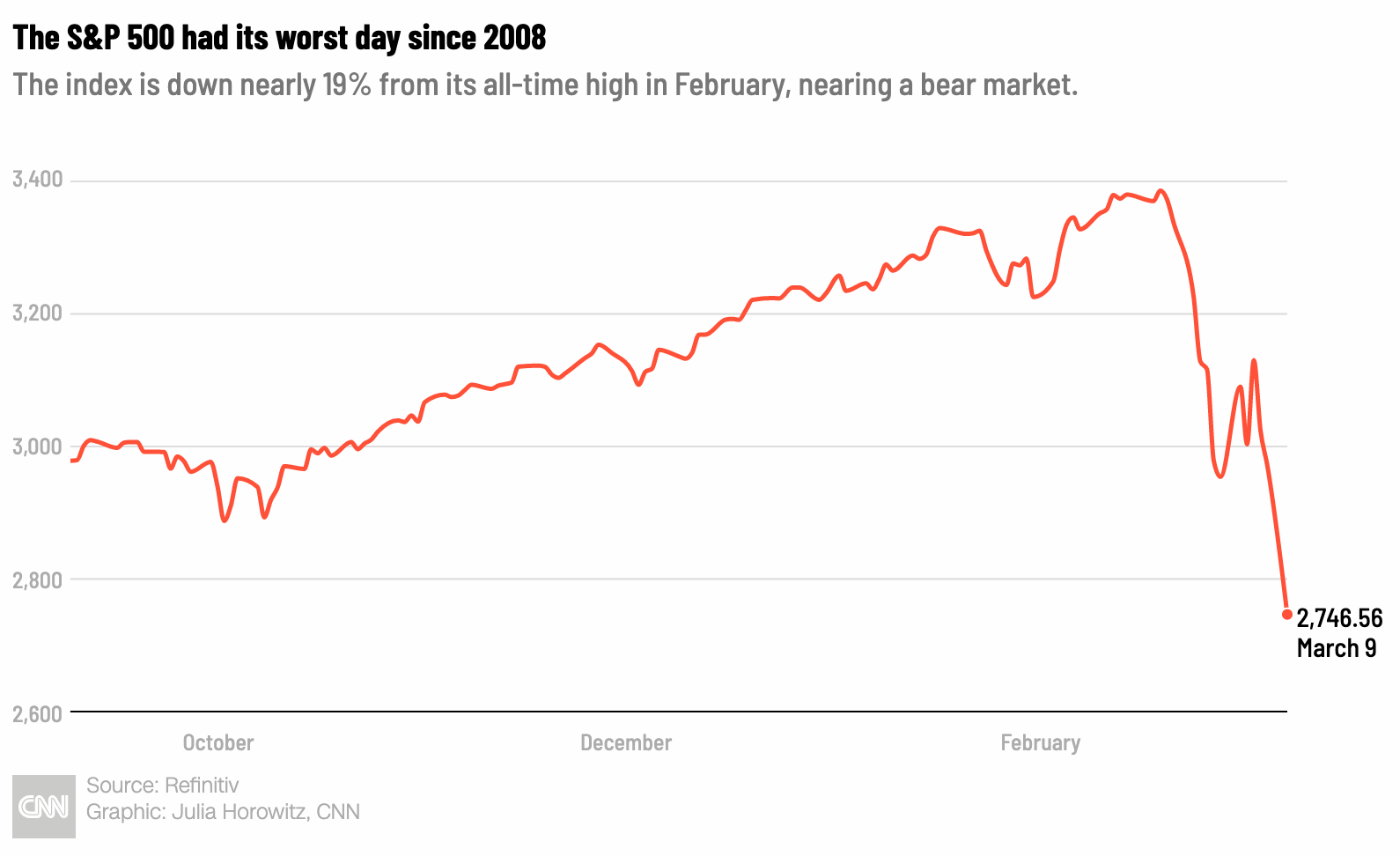 The BlackRock Investment Institute acknowledged Monday that the scale of market moves have been "reminiscent" of 2008. But the asset manager sees fundamental differences.

BlackRock said in a note to clients:

"The economy is on more solid footing and, importantly, the financial system is much more robust than it was going into the crisis of 2008."

Wall Street has been quick to note that banks are better capitalized this time around due to new regulations, and that debt levels, while high, are concentrated in less risky areas.

This should allow for a faster economic rebound after the coronavirus is brought under control. "Fear can take [the market] lower, but expect [a] quick recovery when health threat recedes," former Goldman Sachs CEO Lloyd Blankfein tweeted Monday. "Unlike '08, will avoid systemic damage."

One issue, however, is that governments and central banks were able to throw massive amounts of money at the problem in 2008. That may not be as effective this time around.

President Donald Trump said Monday he would press for a payroll tax cut, but if people are staying at home, they're unlikely to pump that money back into the economy.

Central banks, meanwhile, have far less ammunition at their disposal, with interest rates already at or near historic lows. And there are concerns that monetary policy remedies take time to flow through the system. 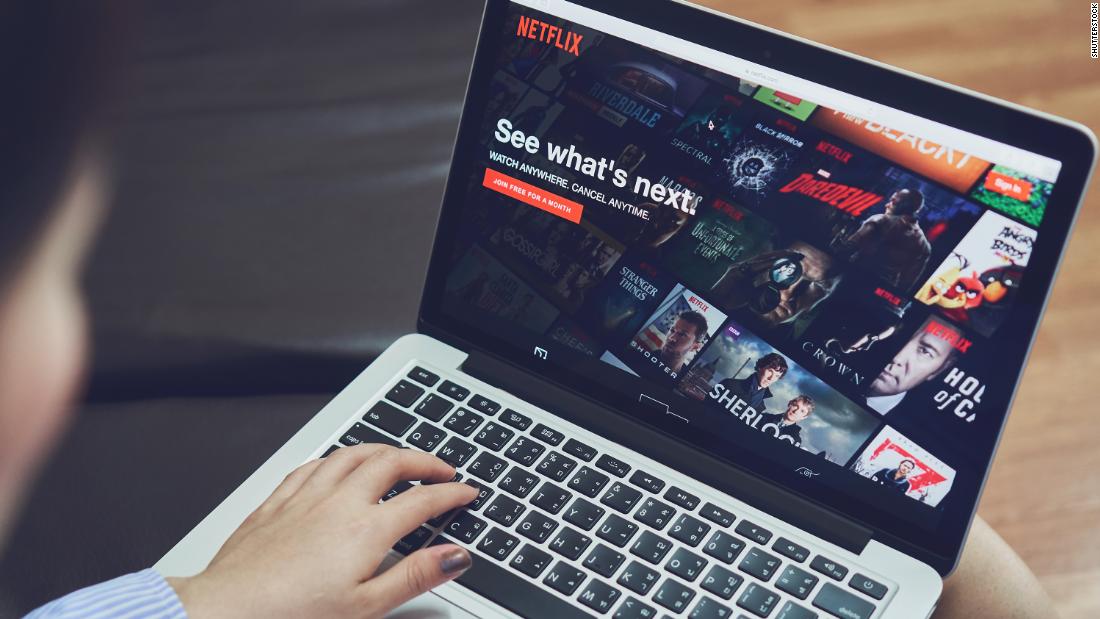 There is a belief among some investors that Netflix (NFLX) actually could benefit from the coronavirus outbreak. The stock is still up 7% this year despite Monday's massive sell-off.

Why? The rationale is that more nervous consumers will stay home and binge watch shows. But Netflix may not be positioned for a coronavirus boost after all, according to Needham analyst Laura Martin.

Martin gave three reasons why (13 might have been more fitting) Netflix won't get a COVID-19 bump in a research report Tuesday morning.

Martin currently has an "underperform" rating on Netflix, which is essentially a sell. 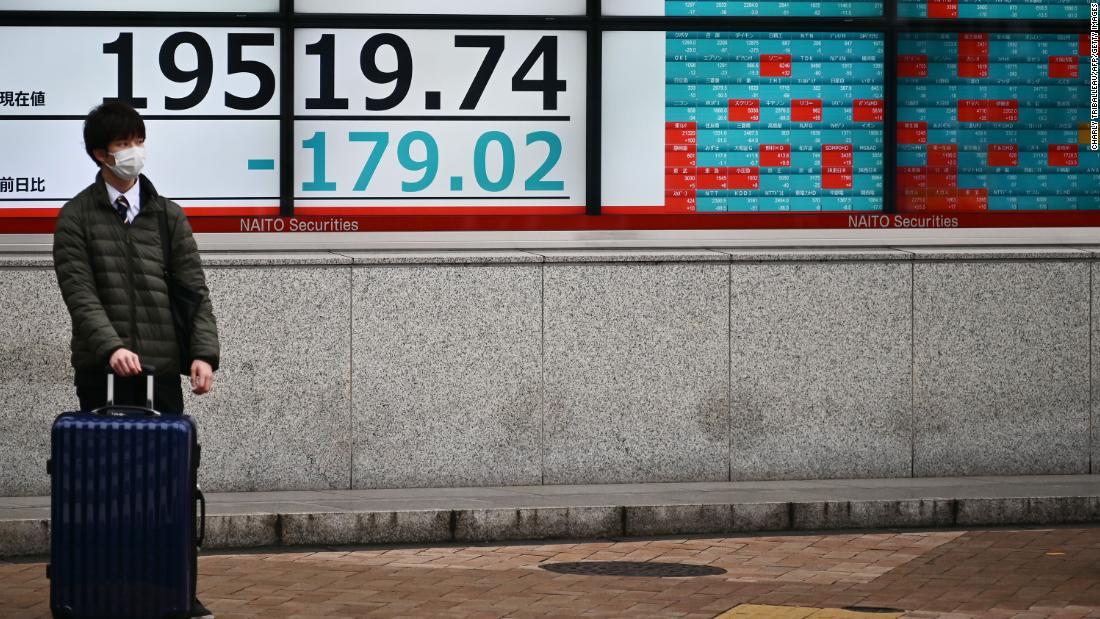 Markets in Asia and Europe staged a modest recovery Tuesday, and Dow futures gained more than 1,000 points a day after novel coronavirus fears and an oil price war sparked a worldwide panic.

The mood among investors was helped by news of President Donald Trump's plan to propose "significant relief" in the form of a payroll tax cut and help for hourly workers most affected by the coronavirus, and expectations of more stimulus measures elsewhere.

European shares opened higher after Monday's plunge. In the opening minutes of trade, the FTSE 100 (UKX) and Germany's DAX (DAX) were all trading more than 3% higher. The French CAC 40 (CAC40) rose more than 4%. 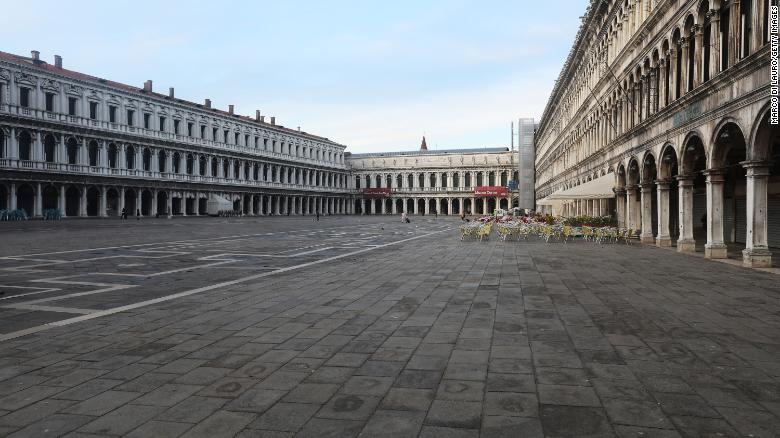 The coronavirus is encouraging people to stay at home and avoid travel, slashing demand for flights, hotel rooms and restaurant bookings.

At the same time, factory shutdowns in China and elsewhere, and fears of more disruption in other parts of the world, have snarled supply chains. This dynamic is squeezing companies, which have issued a steady stream of warnings about how the virus will hit their profits.

The longer the pandemic lasts, and the more dramatic the efforts are to contain it, the more profound the effects will be for the global economy. Right now, the situation is highly uncertain.

"The length and depth of the global economic contraction depends most importantly on whether health officials can materially slow the spread of the virus via a ramp-up in testing, restrictions on mass gatherings, and quarantines of infected people as well as their contacts," Jan Hatzius, chief economist at Goldman Sachs, told clients Monday.

In China, which has been slammed the hardest by the outbreak, activity plunged in February, setting the country up for its first economic contraction since the 1970s. That was already rippling through the global economy.

But as the number of global cases ticks up above 100,000, and governments outside China announce more restrictions, economists have begun to weigh a more severe gut punch to the global economy. With each day that passes, the odds are rising. 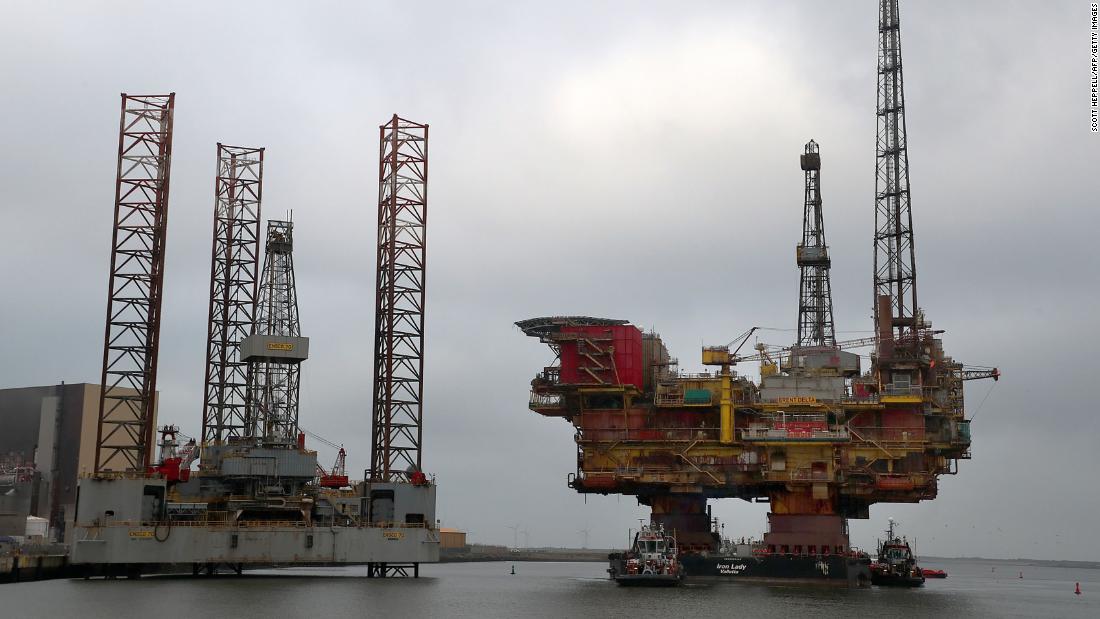 US oil futures were last up about nearly 6% to $33 a barrel, while the global benchmark Brent crude rose 4.9% to nearly $36 a barrel.

Oil prices suffered their worst day since 1991 on Monday after Saudi Arabia shocked the market by launching a price war against onetime ally Russia. US oil prices dropped as much as 34%, ending at a four-year low of $27.34 a barrel.

Australia's S&P/ASX 200 closed up 3.1%, the index's best day since November 2016. The strong showing saved the index from entering into a bear market, defined as a 20% drop below a recent high. 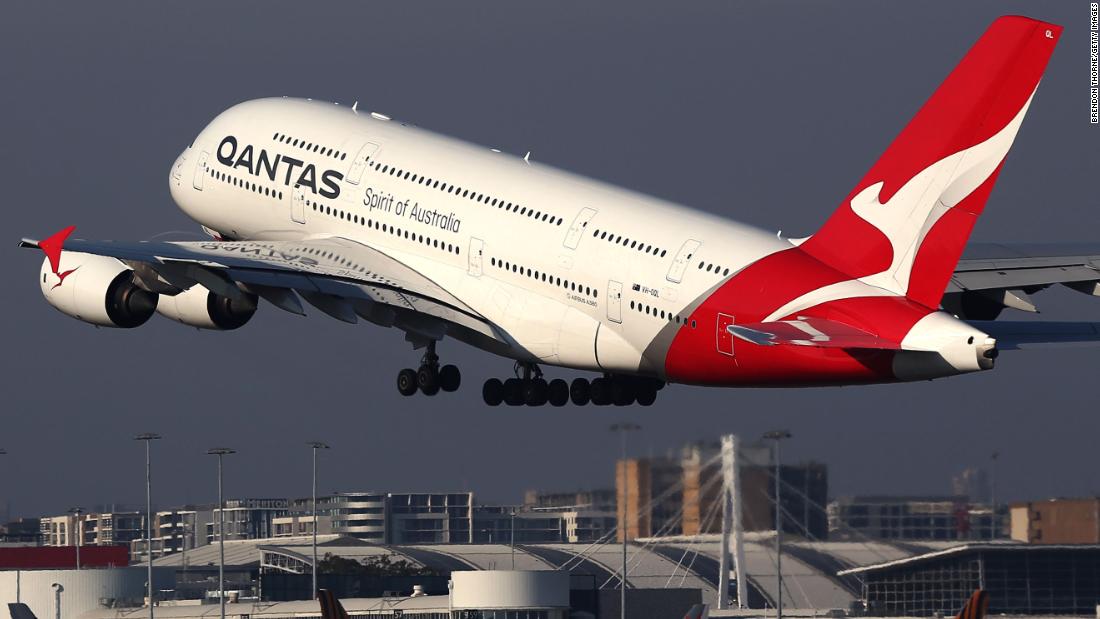 Qantas has announced sweeping cost-cutting measures in light of the worsening novel coronavirus crisis, including slashing almost a quarter of all flights for the next six months and significantly reducing executive pay.

For the rest of this fiscal year, CEO Alan Joyce will forgo a salary, according to the Australian flagship carrier. Qantas (QABSY) Chairman Richard Goyder will stop taking management fees, and the executive leadership team will take a 30% pay cut.

The bulk of the cancellations will take place in Asia, where the virus outbreak originated. Flights in the region have been reduced by 31%. The airline will also lower capacity in the United States and the United Kingdom. 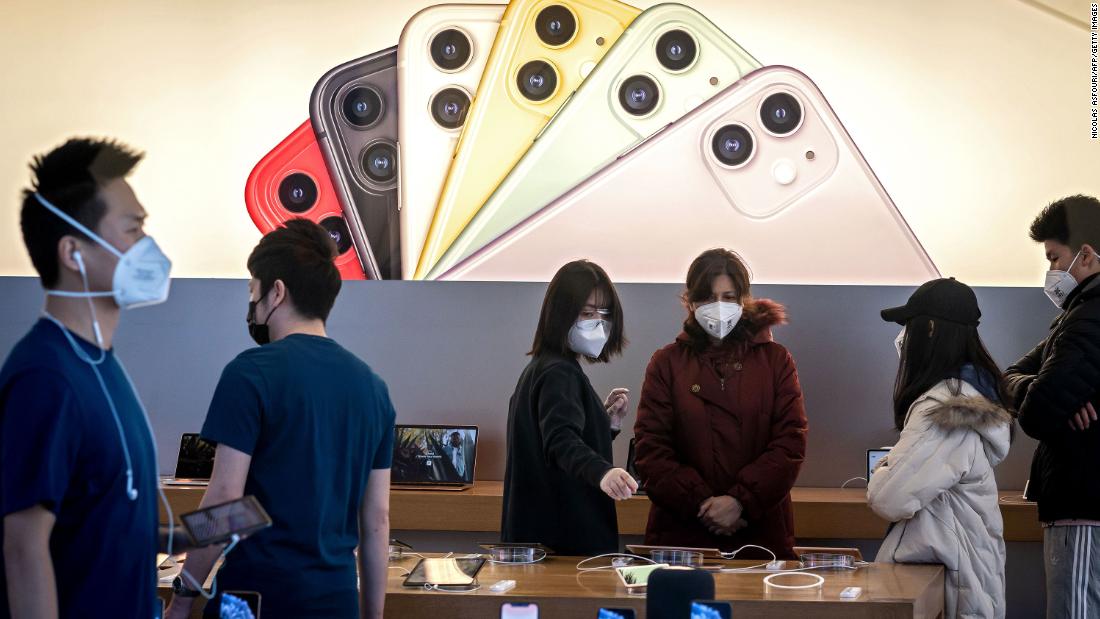 Apple's iPhone sales in China were decimated last month as the novel coronavirus outbreak slashed demand for smartphones. But analysts predict a big recovery is just a few months away.

Apple (AAPL) sold fewer than 500,000 iPhones in China in February, according to government data released this week, a plunge of more than 60% compared to the same month last year.

The drop undercut progress the company had been making in its bid to close the gap with Chinese rivals. Sales for the iPhone jumped in December, propelling Apple's stock to a record high on Wall Street earlier this year.

The coronavirus outbreak slowed Apple's momentum, but it handicapped domestic rivals, too. Overall smartphone sales in China fell 55% in February to 6.3 million compared to the same period last year. Analysts say everyone will be competing to make up for lost sales later this year.