We’ll see how it works out. At some point I expect to meet with President Xi, who I have a lot of respect for and like a lot and make the parts of the deal that the group is unable to make," Trump said. 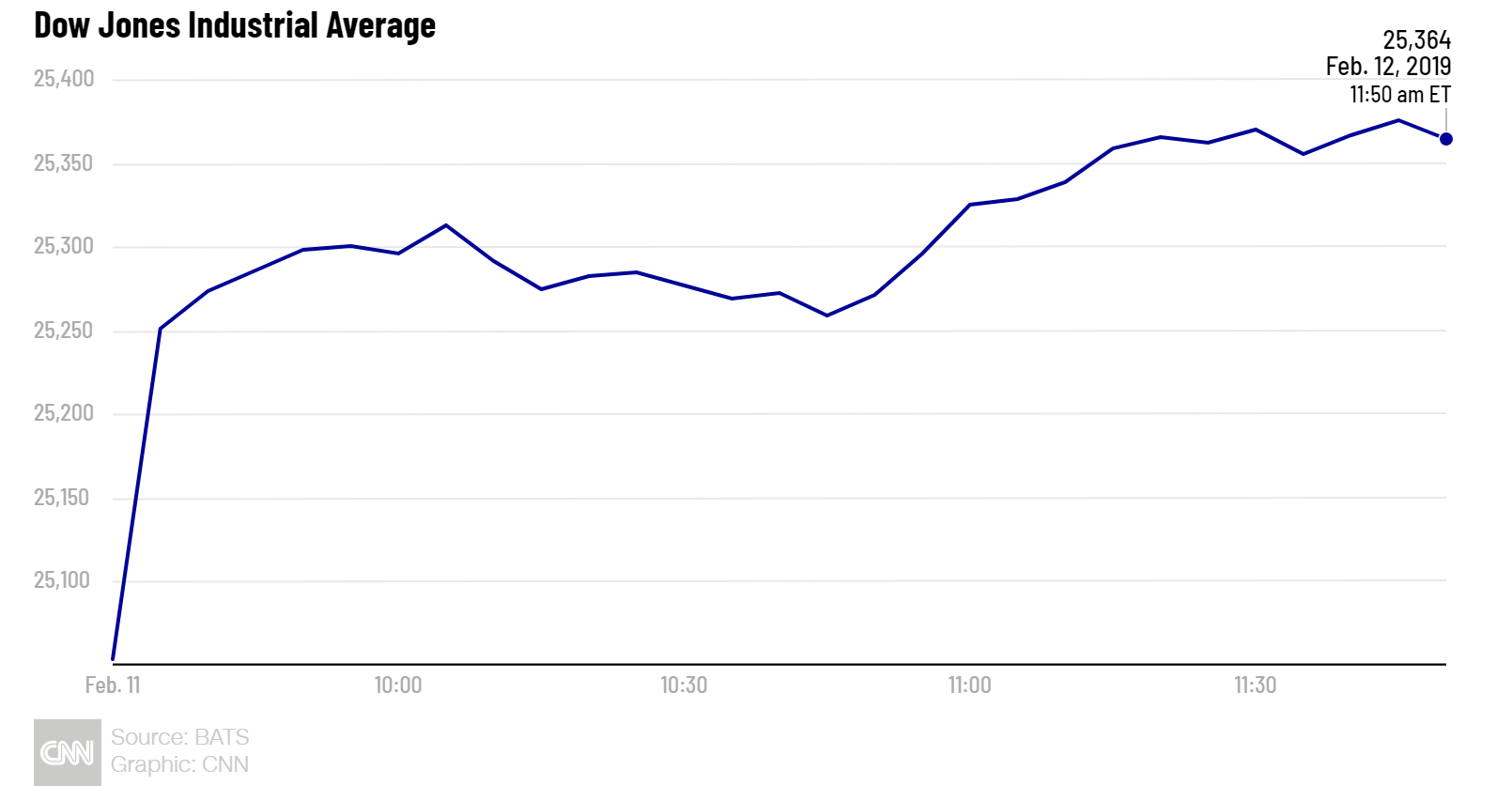 Wall Street on Tuesday cheered a reversal of two trends that had been weighing on investors: US politics and oil.

The Dow jumped more than 300 points Tuesday after politicians in the United States tentatively agreed on a plan to avert another government shutdown. Stocks also got a boost after Saudi Arabia decided to cut oil production.

🥑Chipotle (CMG) is currently trading at its highest level since November 2015: 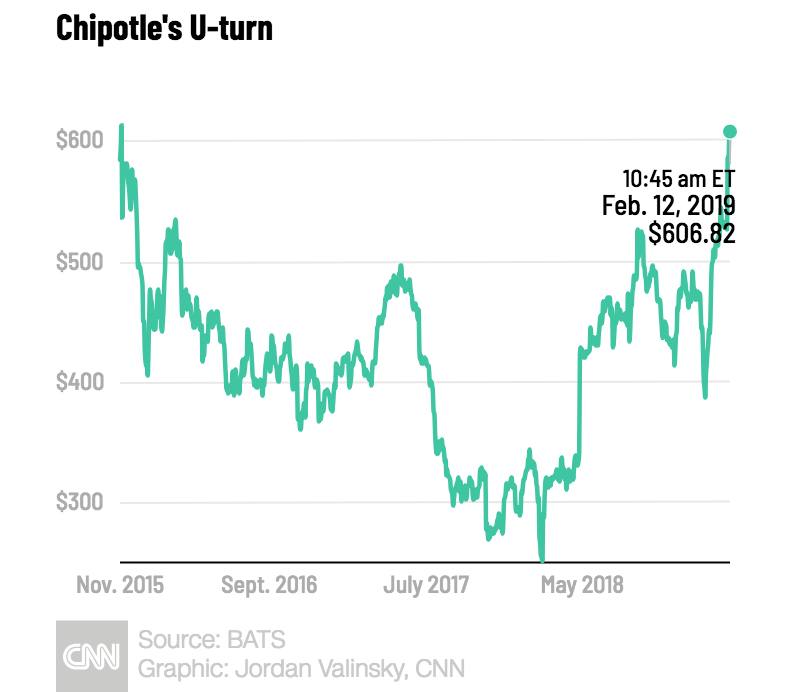 🌯 Chipotle's stock has climbed a whopping 140% since last year: 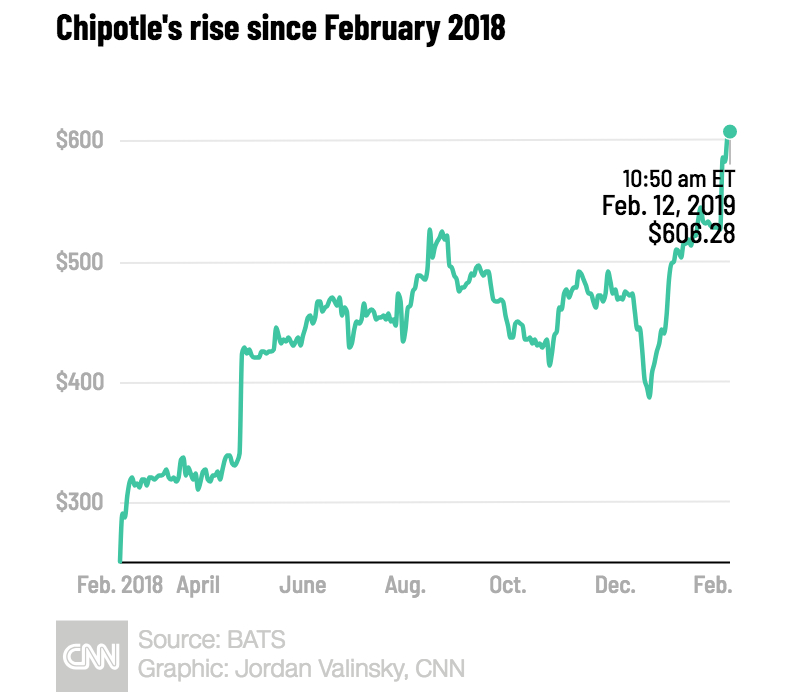 🌮It's all because of CEO Brian Niccol. In a recent interview with CNN Business, he said the company's success is due to its emphasis on digital orders, highlighting the company's real ingredients and introducing new menu items, such as diet-friendly bowls. 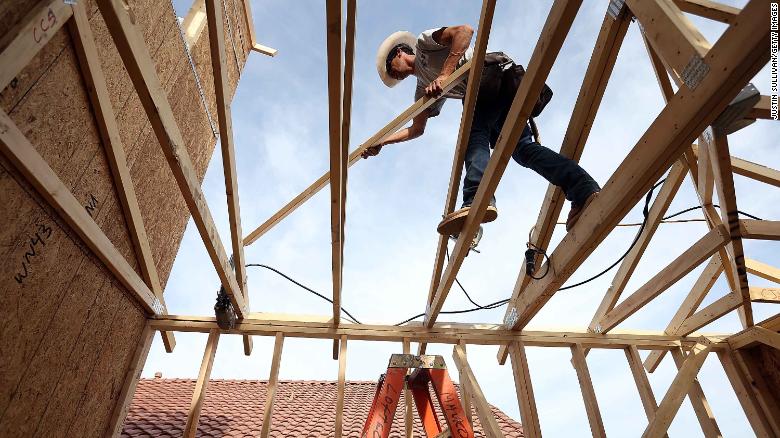 As gridlock mounts in Washington, small businesses are getting more worried about the future.

The National Federation of Independent Business' small business optimism index, which surged after the election of President Donald Trump and reached all-time highs last summer, last month dropped to the lowest level since November of 2016.

One thing small businesses make clear to us is their dislike for uncertainty," said NFIB's president Juanita Duggan, in a press release accompanying the report. "And while they are continuing to create jobs and increase compensation at a frenetic pace, the political climate is affecting how they view the future.”

The survey was taken in the midst of the 35-day government shutdown. Although hiring and business investment remain strong, half of the decline in the reading came from business owners' expectations for economic growth in the second half of the year. Most economists expect to see a deceleration as the effects of tax cuts and spending wear off.

Other "soft" measures of consumer and business sentiment have also cooled off markedly in recent months, though the January hit may be temporary if the White House and Congress manage to head off another shutdown before the deadline passes this week.

Also on Tuesday, the Labor Department reported that job openings reached a high of 7.3 million in December, with a particularly large jump in demand for construction workers and accommodation and food service employees.

Since March 2018, there have been more job openings than unemployed people.

The roller coaster ride that oil prices have been on lately isn't ending anytime soon.

Several factors are driving these swings, according to Francisco Blanch, head of global commodities research at Bank of America Merrill Lynch.

Blanch told First Move anchor Julia Chatterley that it's a "little bit hard to see how things pan out," but that he expects prices to increase between 10% to 15% this year from where they are now. 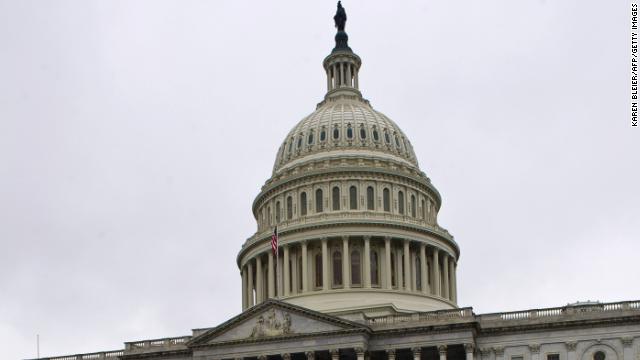 Wall Street is on track to snap its four-day losing streak.

Markets were boosted by the deal in Congress to avert a shutdown and hopes of a trade deal with China.

Electronic Arts (EA) surged 9% on the strength of its new action game Apex Legends. Molson Coors (TAP) slumped 7% after restating 2016 and 2017 results due to “material weakness” in accounting.

"The US government shutdown seems to have been averted and there's a strong chance that import tariffs on Chinese goods will be postponed," Societe Generale's Kit Juckes wrote to clients Tuesday. "Risk is on." 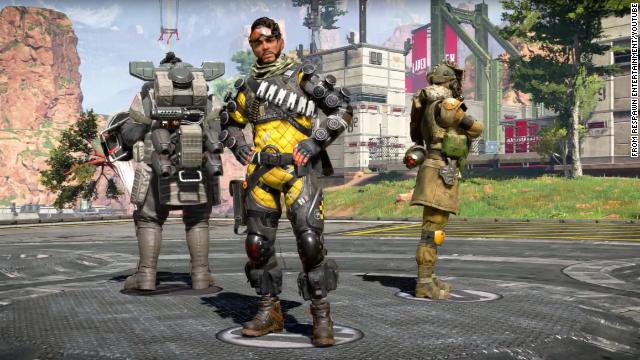 Fortwho? Video game maker Electronic Arts continues to wow Wall Street with strong demand for its new action game Apex Legends, a multiplayer battle royale game that the company hopes will compete with the juggernaut that is Fortnite.

Shares of EA soared last week after Vince Zampella, the head of Respawn Entertainment, the EA-owned studio that produced Apex Legends, noted that the game had attracted 10 million players in just three days.

It looks like Apex Legends is not slowing down one bit. Zampella tweeted again after the market closed Monday to point out that the game now has 25 million players.

EA's stock (EA) was up 8% Tuesday morning and now has surged more than 40% after reporting disappointing results last week. The success of Apex Legends is also going to put more pressure on rivals Take-Two (TTWO) and Activision Blizzard (ATVI), which reports earnings later Tuesday, to come up with their own Fortnite-esque games. 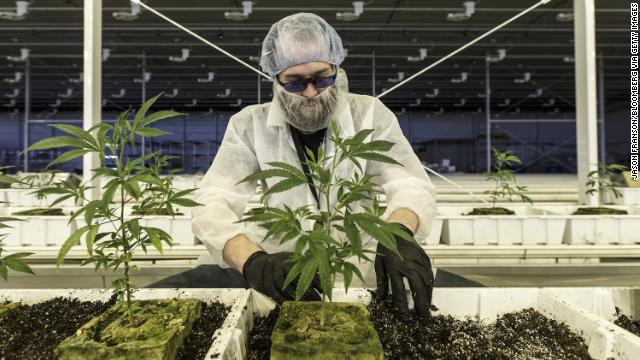 Canadian marijuana company Aurora Cannabis has a good problem -- so much demand for its product that the CEO is not sure how to handle it.

Aurora Cannabis reported revenue of $54.2 million in its most recent quarter, a more than 360% increase from a year ago. But the company posted a loss because expenses rose at a faster pace than sales.

Canada legalized recreational marijuana use last October, helping to fuel the surge in demand. But pot prices fell in the quarter, in part because of more competition. Aurora Cannabis said the average selling prices of dried cannabis and cannabis extracts were down more than 20% from a year ago. Shares fell more than 5% in early trading Tuesday on the news.