US stocks rallied for a second straight day Wednesday in a volatile day of trading. The Federal Reserve, as expected, raised interest rates for the first time since December 2018. Fed chair Jerome Powell reiterated that the central bank will remain aggressive in its fight against inflation and stressed that the economy is "very strong."

The surging prices that defined much of 2021 aren't going away as fast as many would hope.

That's partly because of the disruption caused by the Russia-Ukraine war.

"Before the invasion of Ukraine by Russia…I would have said the expectation was that inflation would peak sometime in the first quarter, maybe the end of the first quarter of this year" and start to come down in the "back half" of the year, Powell said.

That expectation remains largely the same, but "we’re already seeing a bit of short-term upward pressure in inflation due to higher oil prices," as well as supply chain snarls caused by the war. "That could actually push out the relief we were expecting on supply chains generally."

In other words, we can't put an exact date on when inflation will come down. "We don't have a perfect crystal ball," Powell emphasized in a news conference.

Bottom line: "We still expect inflation to be high this year," albeit lower than last year, Powell said. But sharper relief may not be felt until 2023.

The surging price of oil and other commodities has some worried that the United States could wind up in a recession. But Federal Reserve chair Jerome Powell is not concerned.

Powell said at a press conference after the Fed hiked interest rates that the likelihood of a recession this year is "not particularly elevated." He noted the continued strength in the job market, where the unemployment rate is low and wages are rising. With that in mind, Powell said that he thinks the economy "can withstand tighter monetary policy."

The Dow gave up most of its gains and was flat following the Federal Reserve's decision to raise interest rates Wednesday. The S&P 500 and Nasdaq pulled back from earlier highs too. The rate hike was expected. But investors may be worried about new economic projections from the central bank.

The Fed slashed its economic growth forecast and boosted its inflation outlook. The Fed said that it now expects gross domestic product (GDP) growth of 2.8%, down from its forecast of 4% in December. The Fed also is forecasting PCE inflation of 4.3%, up from 2.6% only three months ago.

That sounds an awful lot like stagflation, the combination of slowing growth and high prices.

And if investors were hoping that the Fed would show some restraint because of global geopolitical jitters, this forecast seems to debunk that.

"People were a little delusional to think events in Ukraine would derail the Fed," said Julian Brigden, co-founder of Macro Intelligence 2 Partners, a research firm. "The Fed has acknowledged reality."

Kathy Jones, chief fixed income strategist at the Schwab Center for Financial Research, added that investors may also be nervous about the Fed's so-called dot plot, which shows where individual Fed members expect rates to be at the end of the year. The dot plot suggests there could be seven rate increases in 2022.

"The Fed is predicting a short series of sharp rate hikes," Jones said. "The Fed is reacting to inflation very strongly and they want to signal that they don't want to tolerate it and have it become embedded."

The Federal Reserve is raising interest rates for the first time since 2018, the central bank announced Wednesday at the conclusion of its highly anticipated two-day monetary policy meeting.

The move marks the end of the Fed's pandemic-era easy money policy and comes amid soaring inflation across America.

The quarter-percentage-point increase had been well telegraphed by the central bank, with Chair Pro Tempore Jerome Powell hinting at it repeatedly over the past few months. Earlier this month, Powell told lawmakers that he favored a quarter-point raise.

This is the first rate increase since December 2018 and the first time rates have moved from their level of near zero since the bank slashed them almost exactly two years ago in March 2020 in the wake of the pandemic.

Restaurant chains are trying to keep costs down, but commodity prices are rising and workers are demanding higher wages. That's why prices have already gone up at fast food chain Wendy's.

But Wendy’s (WEN) president and CEO Todd Penegor told Alison Kosik on the CNN Business "Markets Now" show that he hopes the company doesn't have to raise prices much more.

"We have to balance passing on prices and still being a relative value for consumers," Penegor said, adding that the chain also has to make sure it remains competitive on price with other fast-food and fast-casual restaurants.

Supply chain issues have been a challenge for Wendy's, he added, and the company is continuing to work on ways to hold on to workers.

The company is finally starting to see traffic at its restaurants return to pre-pandemic levels at breakfast time, but many consumers are coming in later for breakfast than they were before 2020, Penegor said, adding that Wendy's has had to adapt to provide people with their "late-morning Zoom snack."

Meanwhile, Wendy's is watching what's going on in Russia and Ukraine closely. Although Wendy's does not have restaurants in Russia, there are locations in the former Soviet republics of Uzbekistan and Georgia. Penegor said those restaurants are no longer buying products from Russia.

Consumer prices have surged. Everybody knows that. But the big question for investors, not to mention the Federal Reserve, is whether or not inflation is peaking.

Danielle DiMartino Booth, CEO and chief strategist at Quill Intelligence. told Alison Kosik on the CNN Business "Markets Now" show Wednesday that she believes that stagflation worries — the combination of slower growth and higher prices — are still top of mind.

"Inflation is not poised to decline dramatically," DiMartino Booth said.

But Jeffrey Kleintop, chief global investment strategist at Charles Schwab, told Kosik holds the opposite view, and that he thinks inflation pressures should soon abate. He noted that energy prices have cooled and that the United States is not as exposed to the pinch from higher natural gas costs as Europe is.

"We expect inflation to fall to the 3% to 4% range later this year, which is something the Fed would be more comfortable with," Kleintop said. That's a key reason why he doesn't believe the Fed will hike rates as often as the market is currently expecting, which is currently about six or seven times in 2022.

Investors clearly aren't worried about the fact that the Fed is expected to raise interest rates later Wednesday. The move has been widely expected for months. Federal Reserve chair Jerome Powell even told Congress recently that he was in favor of a quarter-point hike. Gradual rate increases shouldn't hurt profits for big growth companies too much. 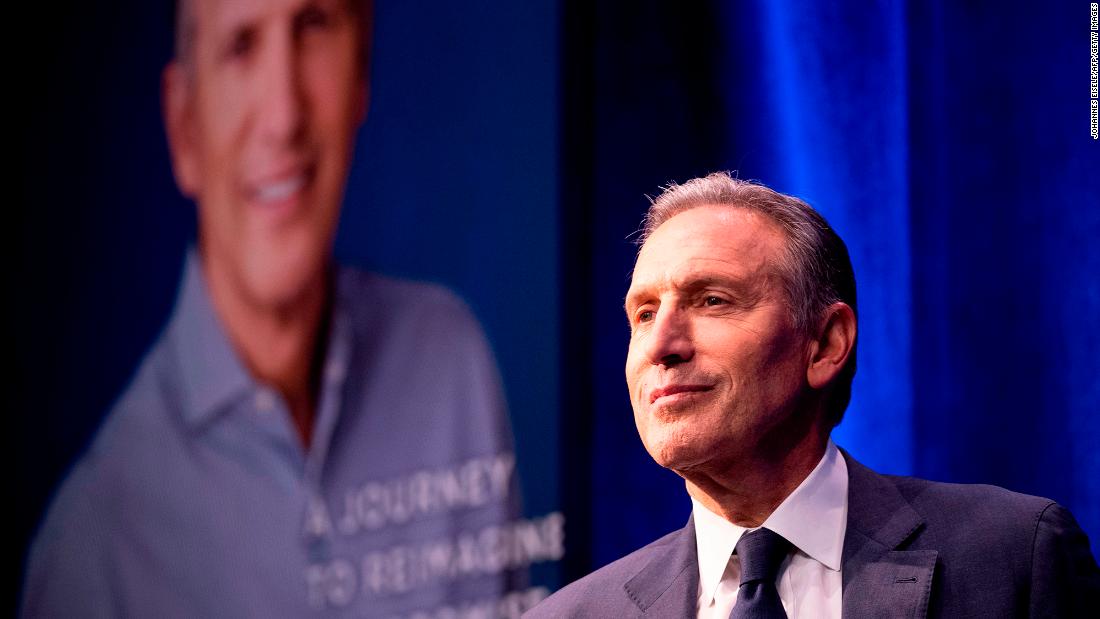 Starbucks investors should be forgiven if they're singing the following lyric from The Who's "Won't Get Fooled Again" today.

Meet the new boss. Same as the old boss.

Shares of Starbucks (SBUX) soared more than 7% Wednesday after the coffee giant announced that Howard Schultz was coming back to the company as interim CEO.

Schultz will replace Kevin Johnson, the former tech executive who took over as Starbucks CEO (from Schultz) in 2017. This will be Schultz's third stint leading Starbucks. He was CEO from 1987 to 2000. He took over again in 2008, at the height of the Great Recession and at a time when many investors felt that the company had lost its way due to overexpansion.

Schultz will face some different challenges now, most notably an increased push by some Starbucks workers to unionize. There are also concerns that consumers may be tapped out as interest rates are set to rise and surging oil prices put a dent into peoples' wallets. Despite Wednesday's rally, Starbucks stock is down nearly 25% this year.