Welcome to the afternoon portion of this selloff: The Dow is now down 900 points, or 3.3%.

Things are really not getting better. Uncertainty is the name of the game and that won't change anytime soon. 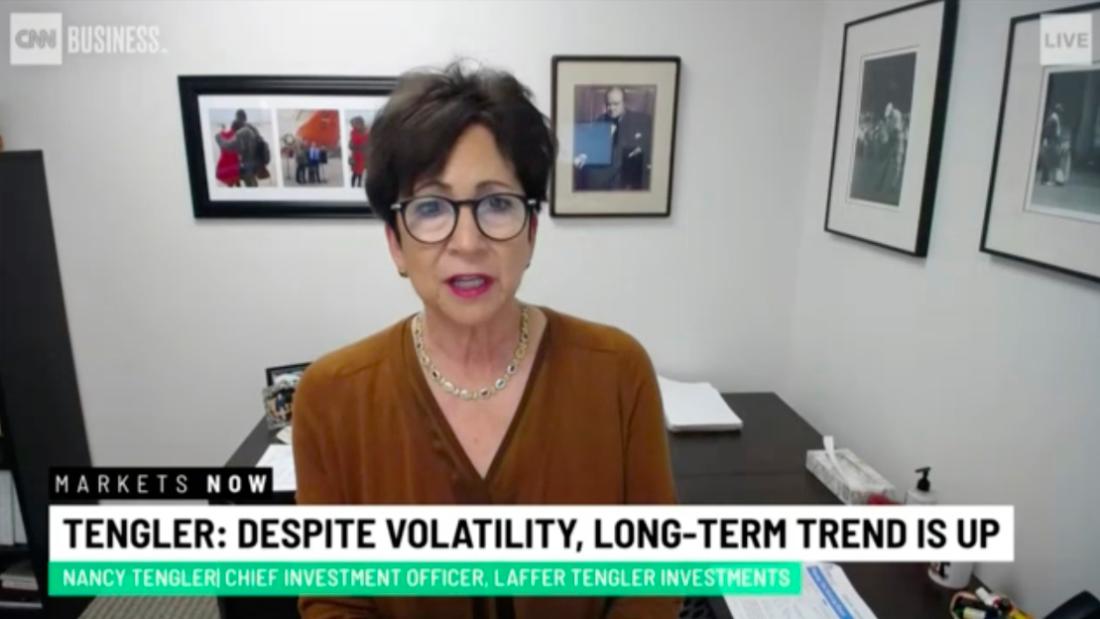 The market looks a mess today but at least the selloff isn't gathering much more steam at midday.

"If you ask three people you hear three different reasons for why the market is selling off," said Nancy Tengler, chief investment strategist at Tengler Wealth Management, on the CNN Business digital live show Markets Now.

Uncertainty about the election outcome next week, further government stimulus and rising Covid-19 infections are weighing on the market. It's already the second selloff of the week, and it might not be the last.

"We will continue to see volatility for at least the next few weeks and maybe longer than that," Tengler said.

But this might also be an opportunity for buyers, although Tengler advises her clients not to "invest your politics."

The outlook for US stocks, however, is good, she said. At the end of the day there is little attractive alternative to the US equity market, and the lagged effects of government stimulus will also continue to feed through, she said. 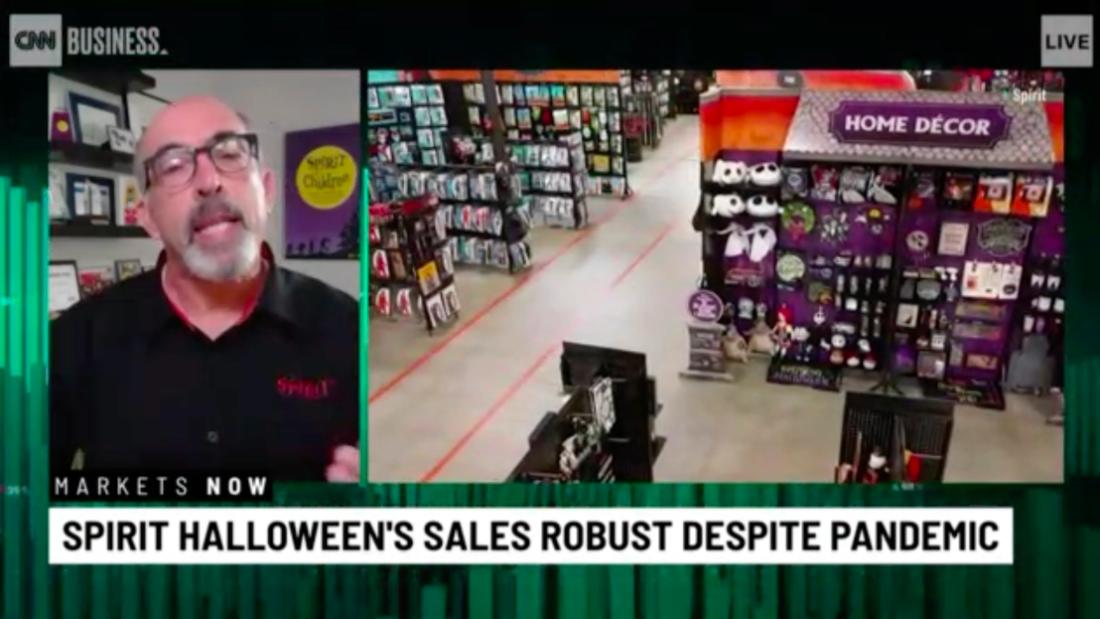 The election is coming closer, but first comes Halloween. This year, society might need that escape more than ever.

Retailer Spirit Halloween is seeing the benefits of this. The retailer has opened more stores than every before -- some 1,400 -- to keep up with demand.

But of course the pandemic has changed things. "We're getting better real estate, more prominent real estate," the company's CEO Steven Silverstein said. But at the same time, the company has had to close its in-store fitting rooms. 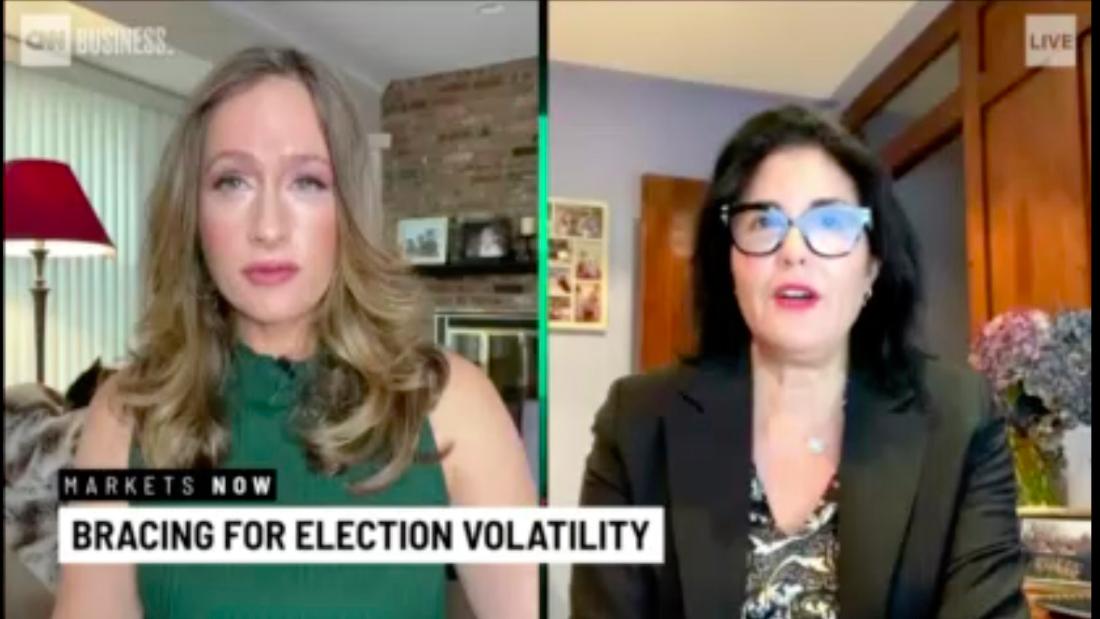 The election is only six days out. Investors are nervous.

"I think we are witnessing a real change on what investors are looking for," said Tina Fordham, head of global political strategy at Avenhurst.

One of the biggest drivers of the US stock market has been government stimulus to get the economy back on track.

"Investors are looking for stimulus, and they're more likely to get that if there's a so-called 'blue wave'," Fordam said.

A rapid rise in Covid-19 infections across Europe is leading governments to bring back restrictions.

In France, local media, including the newspaper Le Monde, report that a new lockdown will be announced by the president in an address to the nation at 8 pm local (3 pm ET) today. CNN affiliate BFMTV reports that the new measures may last four weeks and come into force as early as Thursday evening. 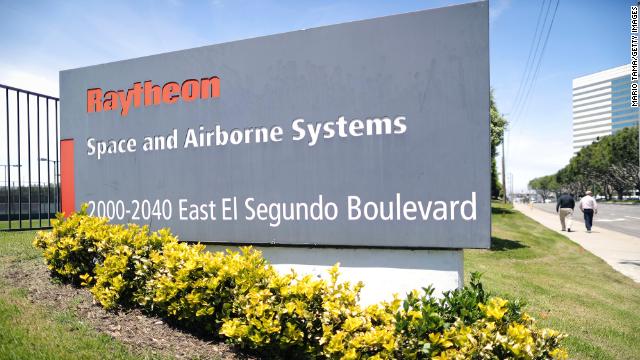 Aerospace giant Raytheon Technologies (RTX) says it received a criminal subpoena from the Department of Justice seeking information related to its financial accounting and reporting practices.

Raytheon disclosed in its quarterly earnings filing Tuesday that it received the subpoena on October 8. DOJ is seeking “information and documents in connection with an investigation relating to financial accounting, internal controls over financial reporting, and cost reporting regarding Raytheon Company’s Missiles & Defense business since 2009.”

The company said it is “cooperating fully” and does not currently believe the investigation will have a “material adverse effect on our financial condition, results of operations or liquidity.”

Neither the company nor the DOJ responded immediately to a request for comment.

Raytheon’s stock fell around 4% on Wednesday. Shares are down around 40% this year as the company grapples with the massive pandemic-fueled hit to the commercial air travel business. 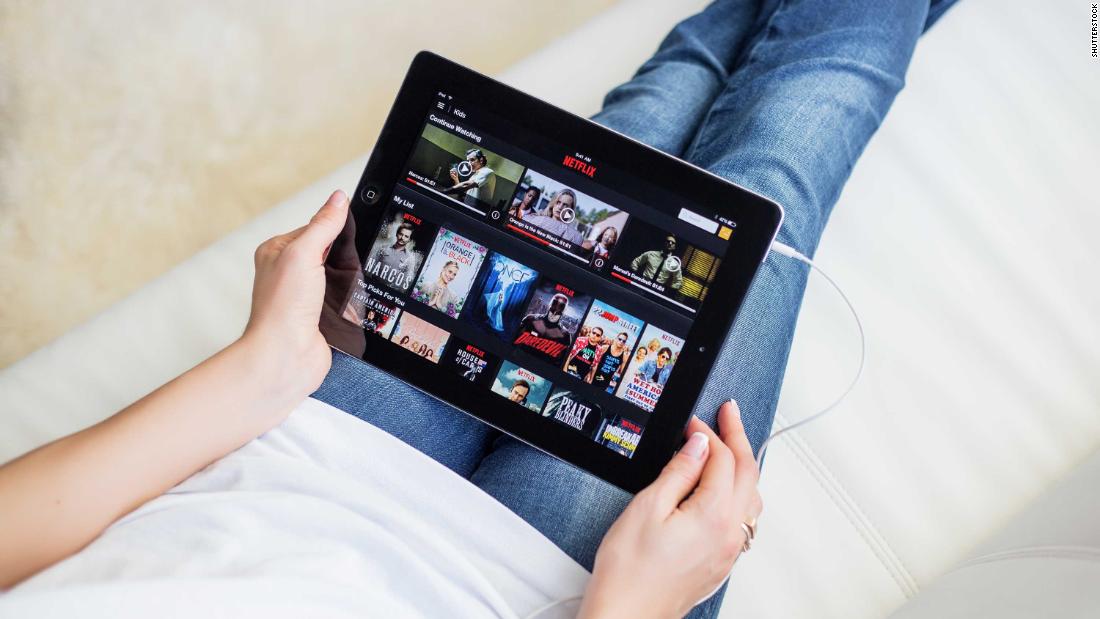 Few stocks were spared in Wednesday's market rout. But investors in Netflix (NFLX) may be chilling today. The streaming giant's shares were up slightly, making it just one of two Nasdaq 100 stocks in green. ADP (ADP) was the other, surging 6% on solid earnings. Only 19 stocks in the S&P 500 were higher as well.

Netflix, unlike other big techs such as Facebook (FB), Amazon (AMZN) and Google owner Alphabet (GOOGL), has largely avoided the regulatory and antitrust scrutiny that has afflicted the other FAANG stocks.

Netflix has benefited from the stay-at-home trend during the Covid-19 pandemic. And despite mounting competition from the likes of Disney (DIS), Apple (AAPL) and CNN/HBO owner AT&T (T) and concerns about slowing subscriber growth, Netflix shares are still up more than 50% in 2020.

Today is messy for the markets but the economic calendar is actually rather quiet. Tomorrow, that's going to be very different.

As every Thursday, we'll get the Labor Department's report on weekly jobless claims. Economists expect to see another 775,000 seasonally-adjusted first-time claims for unemployment benefits. That would be marginally less than the prior week, when initial claims fell below 800,000 for the first time since March.

But these numbers don't tell us the whole story. For example, they don't include claims for Pandemic Unemployment Assistance, which is available for workers that aren't eligible for regular jobless benefits, such as the self-employed.

Continued claims for benefits are expected at 7.7 million, which would be more than half a million less than the prior week. But again, the devil's in the details: Unemployed workers have increasingly been maxing out their state benefits and subsequently rolling onto other government programs like Pandemic Emergency Unemployment Compensation.

Jobless claims continue to be an important indicator of how the recovery is going, but it won't be the biggest report tomorrow.

The Commerce Department will also publish the first look at how the economy fared during the third quarter, in terms of gross domestic product. A big bounce from the second quarter's decline is expected, even though the economy isn't out of the woods yet.

In-person vet visits may be more daunting for pet owners during the pandemic, so pet supplier company Chewy (CHWY) is trying to make things smoother with a new telehealth service.

The service will serve as a triage platform to connect pet owners to licensed veterinarians. The vets won't be able to virtually diagnose medical conditions, provide treatment or prescribe medications. It launched in Florida and Massachusetts in May. It has now expanded to 35 states, and Chewy plans to offer it nationwide.

The global veterinary telehealth market is valued at more than $60 million, and it is expected to grow to nearly $290 million by 2028, according to InsightAce Analytic, a market research and consulting company.

“We have focused our efforts into developing an easy to use and convenient tele-triage product that we anticipate will have a positive impact given the current environment, and also extend beyond that,” Sumit Singh, CEO of Chewy, said in a press release. He added that the vet community has also been impacted by clinic shutdowns or reduced clinic owners, so this service will benefit both communities.