US stocks finished in the green on Wednesday after Senate Minority Leader Mitch McConnell floated options to prevent America defaulting on its debts.

Wall Street had been in the red all day until McConnell’s statement, but investors were cheered by the idea of finally concluding the debt ceiling debate. 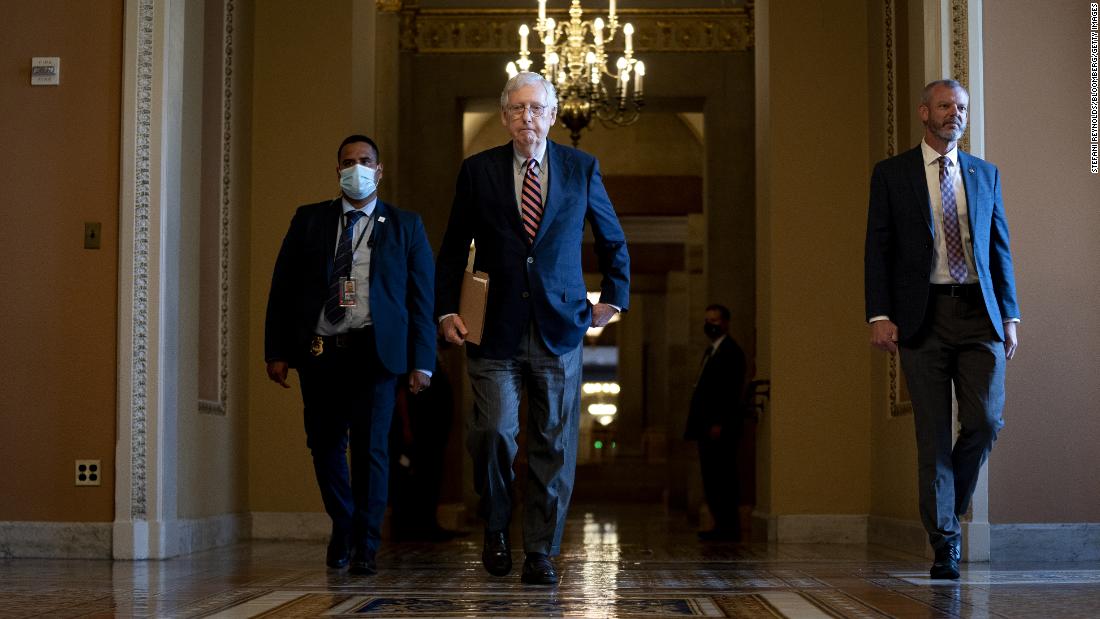 Nothing like some good ol' bipartisanship to get Wall Street's motor running.

That second idea could give Congress some cover, at least for the next few months. It remains to be seen how Democrats will respond to the proposal floated by McConnell.

After McConnell's announcement, stocks turned higher, bouncing out of the red -- although not by much.

Arrows are pointing down and Wall Street is in the red today. It's been a volatile few weeks. So should investors worry that this may be the end of the stock market's sugar rush?

Not yet, according to Joe Duran, head of Goldman Sachs (GS) Personal Financial Management.

There's only a 20% likelihood of a bear market while the economy is expanding -- which it is. So it's more likely this is a correction, which is defined as a 10% decline from the peak.

"I think you just have to take into context we have done a long period without a big decline," Duran told Alison Kosik on the CNN Business digital live show Markets Now.

In that context, then, the current market wobbles aren't all that worrying. And there's no panic in the market either...yet.

"There are lot of reasons to be nervous, but don't confuse a short correction with a bear market," Duran said. For example, investors are fretting about inflation and the debt ceiling debate in Congress. But even against that backdrop, company earnings are still going strong, he added.

"The first part of the recovery was really around technology stocks, growth stocks," he said. Now the market has turned towards cyclical stocks, which also include energy stocks, which are grappling with commodity price volatility. 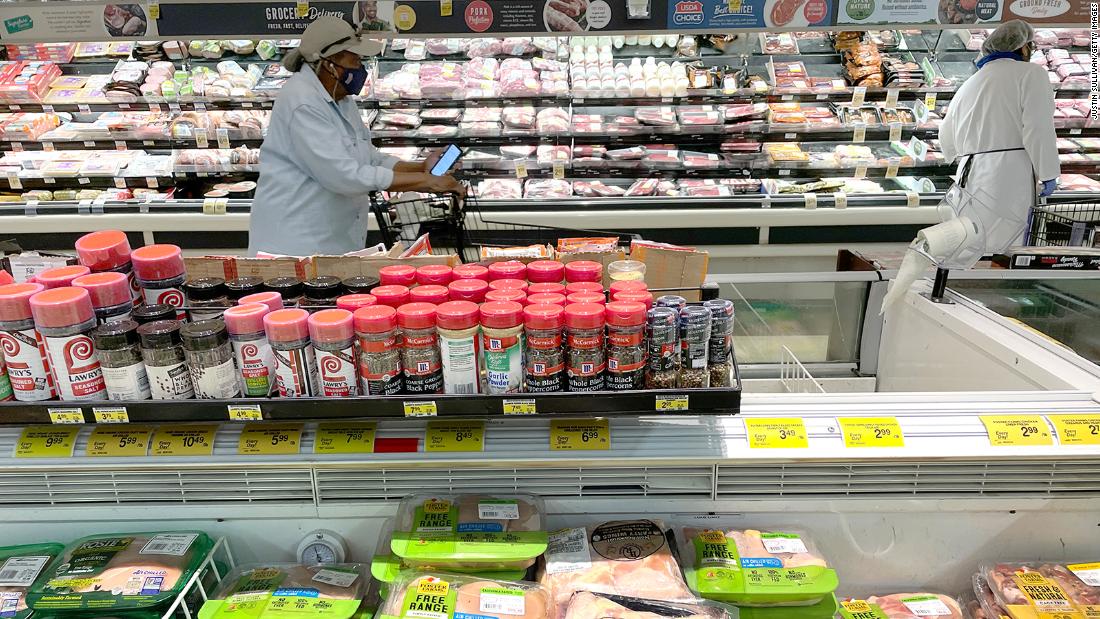 Inflation has been the boogeyman for Wall Street this year and higher prices are also beginning to spook some consumers. Just how long will we have to deal with this spike in inflation?

"Certainly as long as the pandemic is raging," Dana Peterson, chief economist at The Conference Board, said on the CNN Business' digital live show Markets Now.

"Prices for goods will remain elevated," she added, but eating out for dinner will get more expensive, too, because restaurants will be raising wages to attract workers in the midst of a labor shortage.

That said, it doesn't seem like the fast price hikes are denting the economy at the moment, she said. 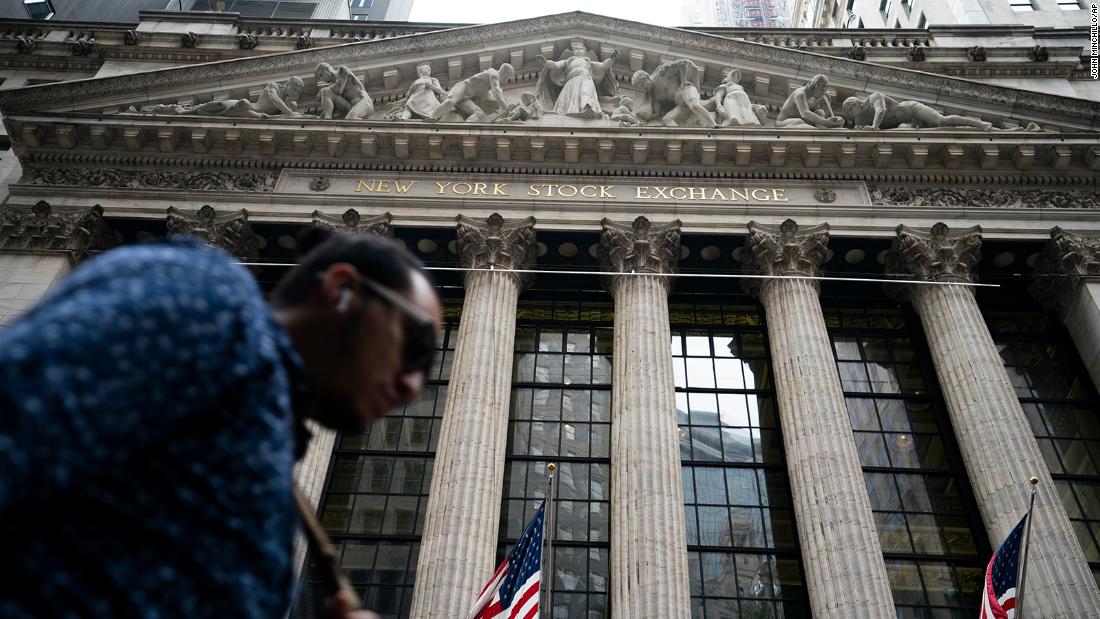 The market has been open for less than an hour but things already look worse than when the bell rang in New York some thirty minutes ago.

All three major indexes have extended their losses and are down more than 1%. Oof.

Energy and industrials stocks are leading losses as commodity prices reversed from their rally earlier in the week. But losses are happening across the board. Walmart (WMT) is the only Dow stock in the green.

Wall Street was in the red Wednesday morning, switching directions again after rallying on Tuesday. The market has been swinging violently in recent weeks.

Inflation worries, bumps in the recovery, the debt ceiling debate, as well as rising energy costs, including natural gas and oil, are among the worries on investors’ minds.

Constellation Brands (STZ), the maker of Corona Hard Seltzer, said this morning it took a $66 million writedown "relating to excess inventory of hard seltzers," citing a slowdown in the once-hot beverage in the United States.

That warning echoes previous news from Boston Beer, which makes Truly Hard Seltzer. In July, it said that the "hard seltzer category and overall beer industry were softer than we had anticipated" — sending its stock plunging.

Constellation Brands investors didn't seem to be as shaken by its news: Shares were down barely 1% in premarket trading.

That was more than the 428,000 jobs economists polled by Refinitiv had predicted. It's also taking the edge off a little bit... Analysts were anxious to see whether the September jobs numbers would be as disappointing as the August figures, potentially pointing at the start of a trend for a slowing labor recovery.

But the ADP number seem to suggests that August was just a blip.

Large companies and the hospitality and leisure industry accounted for the biggest job gains.

US stock futures tumbled Wednesday morning as the roller coaster ride for the markets continues. Investors have been unsure what to think – inflation, Chinese corporate debt issues, the Fed easing its stimulus program, and a slumping economic rebound have caught Wall Street off guard.

Today, investors seem to be most concerned about rising energy prices. Natural gas prices are at a near-13-year high and oil surged to a 7-year high, around $79 a barrel. That could exacerbate inflationary concerns and slow the economic recovery.

That’s among the reasons why investors are ditching US Treasury bonds. The 10-year yield rose to 1.55%, up from 1.53% Tuesday.

Stocks staged a rebound Tuesday, rallying across the board as Wall Street bounced back from a sell-off at the start of the week.