The Fed looks at unemployment and inflation, trying to balance the two to keep the economy humming. But does that mean it ignores other economic metrics that affect Americans, including income inequality and housing affordability?

That's what CNN Business' Anneken Tappe asked Federal Reserve Chairman Jerome Powell, and he agreed that the Fed should address those to the best of its ability -- without overstepping and getting in Congress' way.

"The relative stagnation of incomes for people at the lower end of the income spectrum and also lower mobility ... are things that hold back our economy. They are," Powell said. "The thing is, we don't really have the tools to address those. The we have interest rates and bank supervision and financial stability policy and things like that, but we can't get at those things through our tools."

Powell noted, however, that elected officials can -- and should address them.

"We need that prosperity to be very broadly spread," he said. "So, the high unemployment in a particular racial group like African Americans when, you know, we would look at that as we think about whether we're really at maximum employment."

But, ultimately, he noted, "these are issues for elected representatives."

Federal Reserve Chairman Jerome Powell, ever the careful wordsmith, called on lawmakers to get with the program and spend more money to stimulate the US economy.

"The initial response from fiscal authorities was rapid. It was forceful and pretty effective," Powell said.

We're seeing the results of that in the rapid economic recovery. But the recovery is slowing.

"That said, my sense is that more fiscal support is likely to be needed," Powell said. "Of course, the details for that are for Congress, not for the Fed, but I would just say there are still roughly 11 million people still out of work due to the pandemic and a good part of those people were working in industries that are likely to struggle."

If Congress and the Trump administration fail to act, Powell essentially predicted the stock market would crash.

"Just about all -- the overwhelming majority -- of private forecasters who project an ongoing recovery are assuming there will be a substantial additional fiscal support," Powell said.

The Fed had some optimistic news to report at the conclusion of its meeting today. Well ... less bad than before, anyway.

The Open Market Committee updated its economic projections for the year, and it appears that the economy isn't performing quite as poorly as the Fed predicted it would.

For example, the central bankers expect a median 7.6% unemployment rate for 2020, down from the 9.3% forecast in June. And projections for gross domestic product — the broadest measure of the economy — are now for a 3.7% decline for the year, a smaller contraction than the from 6.5% decline expected in June.

So the economy is still going to shrink and unemployment is still really high — but not nearly as bad as what it seemed like at the beginning of the year.

Mask wearing continues to be sore subject for many Americans, but Federal Reserve Chairman Jerome Powell says it could save the economy.

"All of us have a role to play in our nation's response to the pandemic. Following the advice of the public health professionals, to keep appropriate social distances and to wear masks in public will help get the economy back to full strength," Powell said. "A full economic recovery is unlikely until people are confident that it is safe to reengage in a broad range of activities."

Want that mom & pop shop around the corner to survive? Wear a mask. Want to get your job back? Stay socially distant, the Fed argues.

Powell and the Fed have long said that the recovery will depend almost entirely on the path of the virus. As long as it continues to infect Americans, the economy will not return to where it was earlier in the year.

The Federal Reserve committed Wednesday to do more to help the US economic recovery, promising more asset purchases and lower interest rates for even longer than it previously expected.

The Federal funds rate remained unchanged at zero to a quarter percentage point, and will stay there until America's labor market has recovered "consistent with the Committee's assessments of maximum employment" and the inflation rate has risen to 2%, and is on track to exceed that level for some time.

Given the country is still down 11.5 million jobs since February and the consumer price inflation rate over the past 12 months stood at 1.3% last month, this seems like a long way off.

A survey of Fed officials showed the group expects rates to remain at or near zero through 2023 -- a year later than the previous survey conducted in June.

The Fed announced that it would keep rates low for years, doubling down on its new policy first announced in Jackson Hole last month. 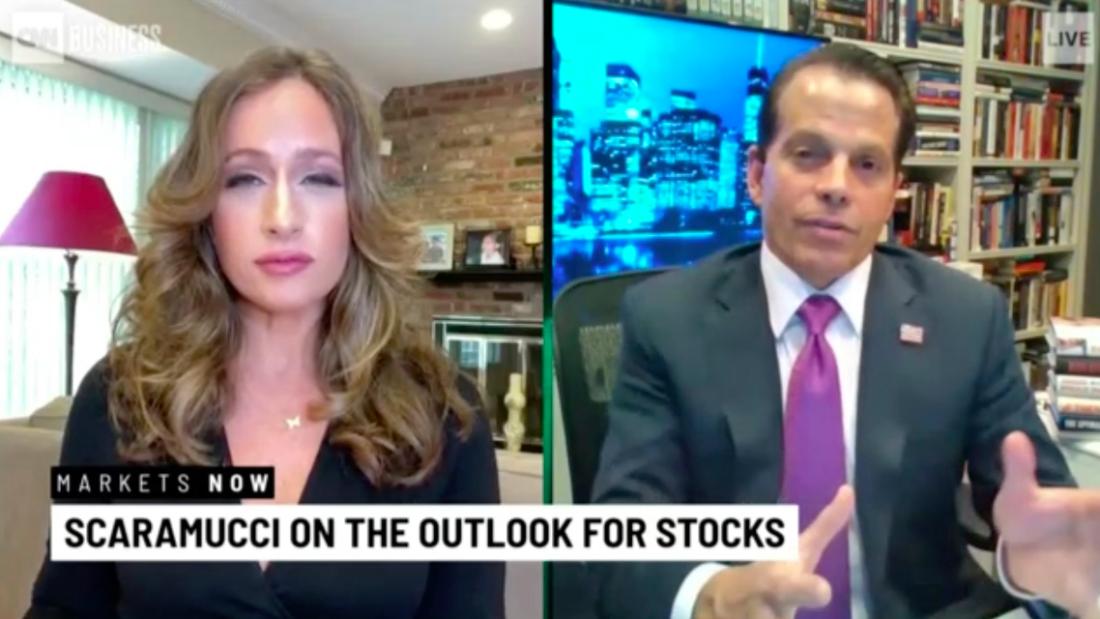 With only 48 days remaining until the election, investors are worried about expected volatility in November and what it will do to their portfolios.

That means a stock and bond portfolio, some hedge fund exposure as well as some commodities, such as gold. Skybridge is also looking at digital currencies, Scaramucci said.

After the drastic March selloff when the US lockdown started, investors should remember how fast this market can move. That's why staying diversified is important.

"Stocks have room to run, no matter what their valuation is," he added, in part because there aren't many other attractive places to put money for investors.

Meanwhile, President Donald Trump "sees the stock market going up as a sign that he'll get re-elected," Scaramucci said, but it's not that simple.

"Ultimately, this is a referendum on whether people think their families are better off than they were four years ago," he said.

Trump has warned that a Biden win could hurt the market, but "he's completely wrong about that," Scaramucci said.

The Federal Reserve, whose policies have bolstered the stock market for months, will maintain its current path no matter who wins the White House in November, he said. 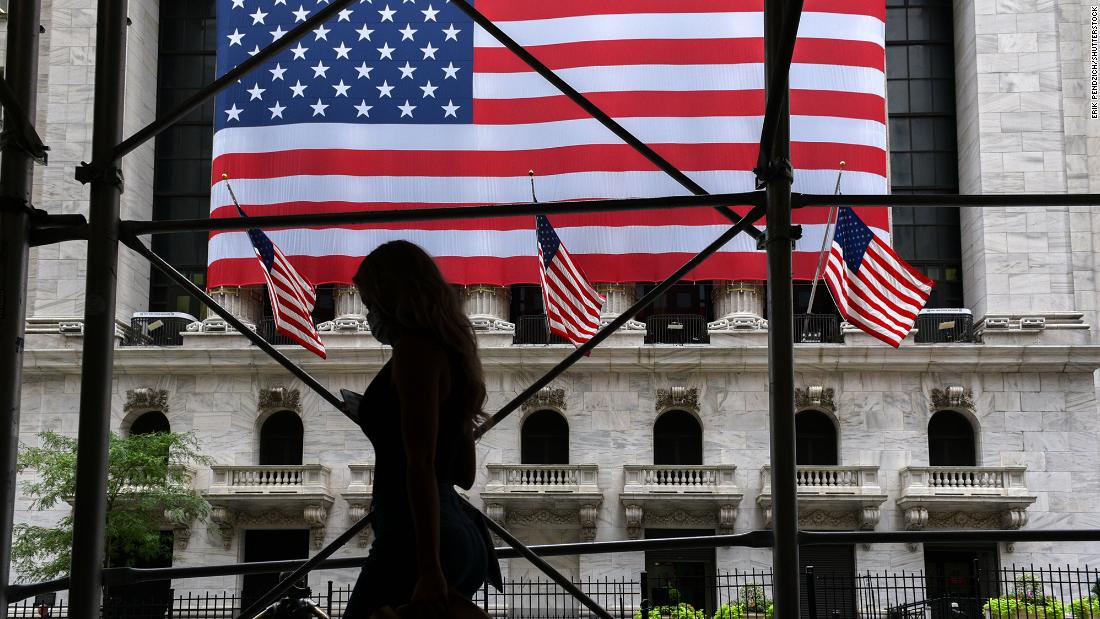 Tony James, executive vice chairman at Blackstone (BX), told CNBC on Wednesday that "disappointing" long term earnings growth combined with lower multiples could cause "anemic equity returns over the next five to 10 years."

"I think this could be a lost decade in terms of equity appreciation," James said, referring to Japan's experience with weak economic growth in the 1990s.

If the warning from James spooked investors, they had a funny way of showing it. 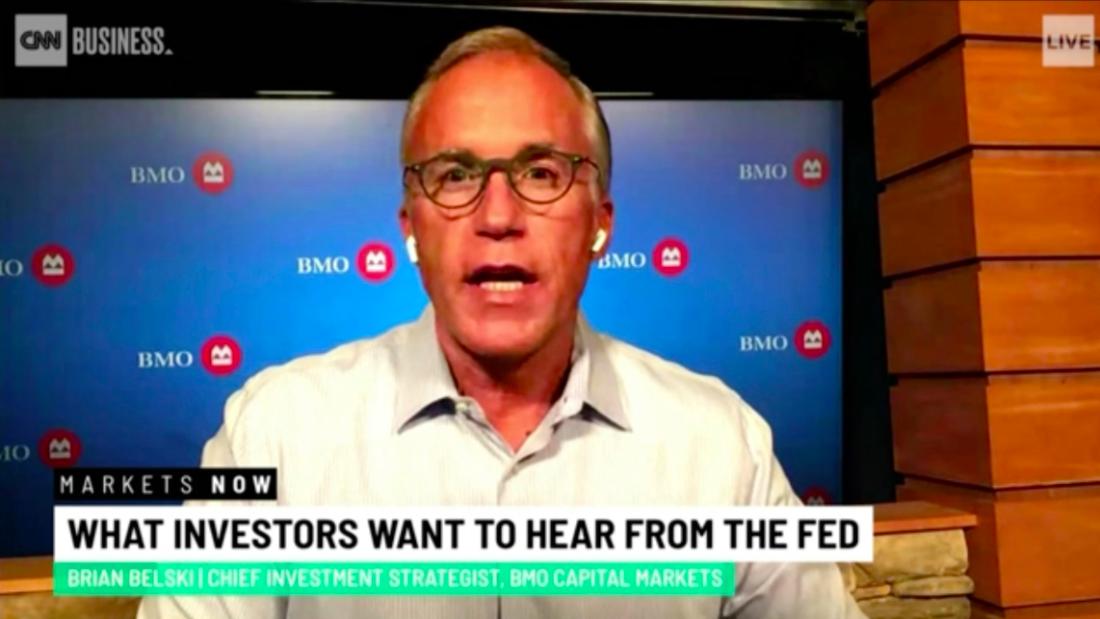 Wall Street has had a few choppy weeks, as big tech sold off rapidly. But fret not, this bull market isn't over, according to Brian Belski, chief investment strategist at BMO Capital Markets during CNN Business' digital live show Markets Now.

"This is a big giant bull market and you should focus on the biggest and best companies in the world and they're here in the United States," he said.

"Risk assets and equities will keep going up," Belski said.

Investors are awaiting the Federal Reserve's policy decision in about an hour. Interest rates are likely to stay low for years, so investors have to adjust their portfolios accordingly, Belski said. Consumer discretionary and technology stocks will be the way to go here, he added.