The S&P 500 and the Nasdaq Composite once again finished at all-time highs on Wednesday, exceeding the records they set Tuesday.

The Dow also finished higher, climbing to over 29,000 points for the first time since February. The index closed up 1.6%, or 455 points, and is now about 450 points below its February record high.

Investors are hopeful that more stimulus from Washington will keep the economic recovery going even as the rebound slows in some places.

The Federal Reserve’s Beige Book said as much, flagging that “continued uncertainty and volatility related to the pandemic, and its negative effect on consumer and business activity, was a theme echoed across the country.”

While that’s bad, it’s yet another reminder that interest rates will stay lower for a longer time.

In August, the economy continued on its long trek to recovery. "But gains were generally modest and activity remained well below levels prior to the Covid-19 pandemic," the Federal Reserve said in its Beige Book report this afternoon.

Consumer spending was up, thanks to car sales and recovery in the hospitality and travel segments, "but many Districts noted a slowing pace of growth in these areas," the report said.

Overall "continued uncertainty and volatility related to the pandemic, and its negative effect on consumer and business activity, was a theme echoed across the country," according to the Fed. 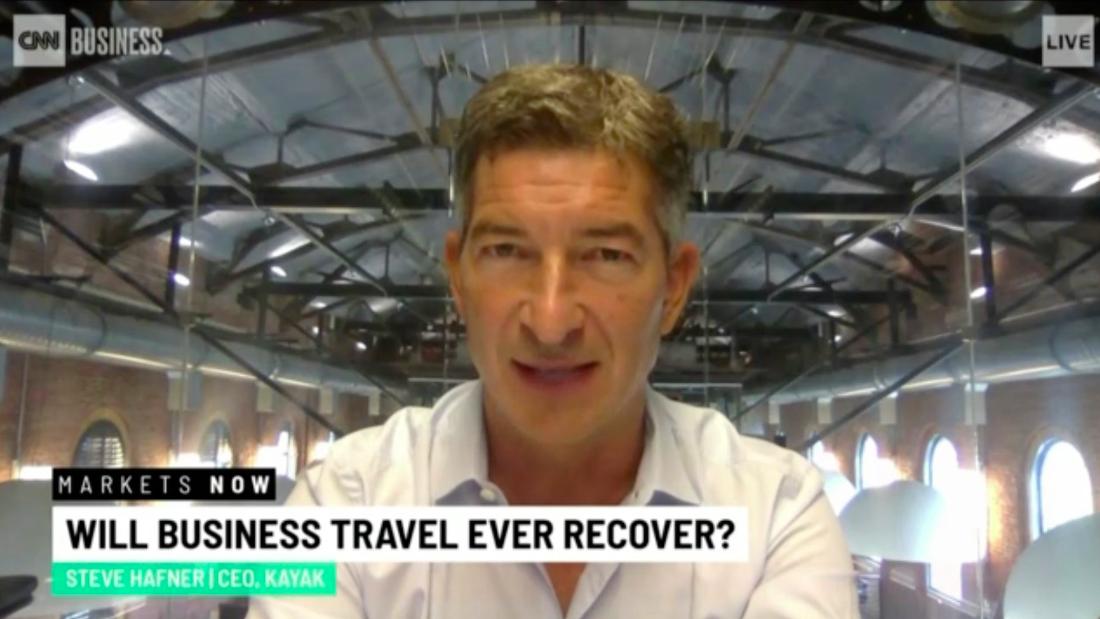 The travel industry collapsed in the pandemic lockdown, and it will be a long time until it's back to normal.

"I don't think we expect business travel to come back anytime soon," Kayak CEO Steve Hafner told Alison Kosik on the CNN Business digital life show Markets Now. "We certainly don't expect it to come back until 2023 at the earliest."

Even though Kayak's queries remain sharply down versus 2019, Americans are indeed still traveling, Hafner said.

"The demand is still out there, it's just not for flights."

People are driving more, not planning ahead as much and staying in alternative accommodations, like bed & breakfasts and private homes rather than hotels.

People "are being digital nomads since they can work from anywhere," Hafner added.

But he's confident that business travel will rebound -- eventually. "It’s come back every other time we’ve had a downturn," he said, citing the aftermath of the Great Recession of 2009 to 2010 as an example. "There's no substitute for face-to-face interaction." 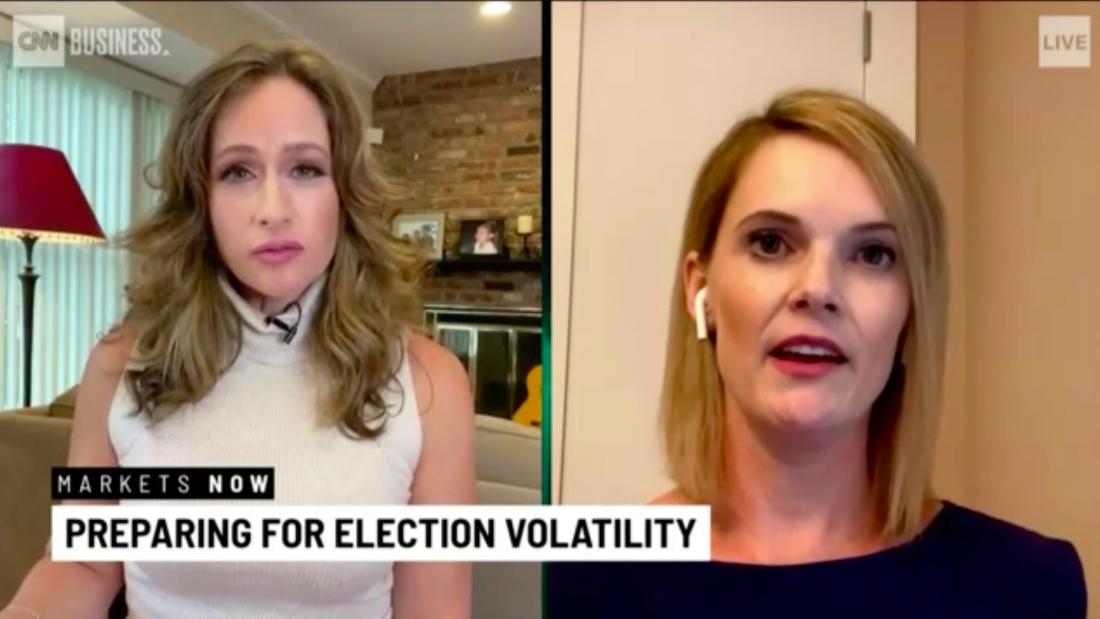 Stocks are racing higher today, and the S&P 500 and the Nasdaq Composite are on track for yet another all-time closing high.

The market is composed of "Covid-defensive," industries that are benefitting from the work-from-home environment, and "Covid-cyclical" stocks, such as travel and leisure, said Kristen Bitterly, head of capital markets Americas at Citi Private Bank. And right now, "the majority of the market is those Covid-defensives," she said. But the big question is whether that trend has staying power.

Another risk is the November election: "The options market right now is basically telling us that there is 20% chance of a 10% or more pullback in equities," Bitterly told Alison Kosik on the CNN Business digital life show Markets Now.

Investors might want to think about buying some protection against possible volatility, especially in case the election is contested. A small buffer might be enough, Bitterly said.

Beyond the election, she added, it's also worth looking at what sectors will recover as the economic rebound moves along. Financials are in that category, Bitterly said. "That's an area [where] if we see growth we want to be positioned for that recovery," she said. 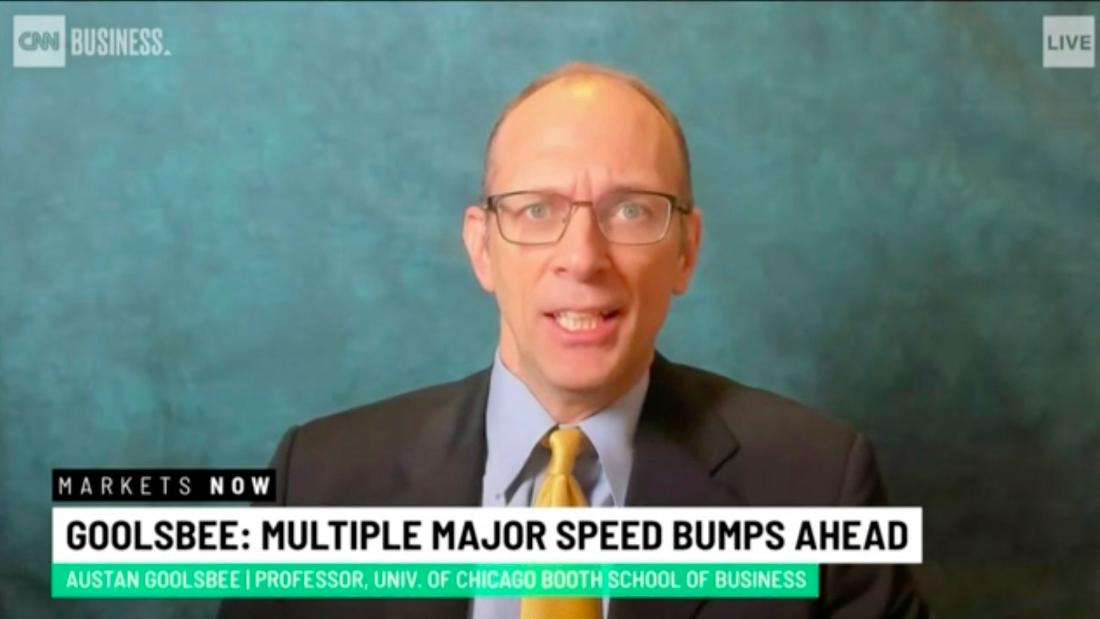 The economy is still far from where it was pre-pandemic. The CNN Business and Moody's Analytics Back-to-Normal index is at 79%, indicating that we're more than 20% away from normalcy.

"That's not a good grade. If we stall out before even getting back to where we were that would be a huge problem," said Austan Goolsbee, former chairman of the Council of Economic Advisers, on the CNN Business digital live show Markets Now.

"If we don't get control of the virus, we will not get back to where we were, not even close," he added.

The health of municipal budgets is among Goolsbee's concerns about the recovery. Most states and municipalities are legally required to balance their budgets, and he worries that they will be forced to lay off millions of workers and raise taxes. On top of that, PPP money and other forms of relief have now run out, he said.

A new stimulus deal could help ease the pain, but the reluctance of Congress to get something done, especially given that it's an election year, "doesn't make sense to me," Goolsbee said. 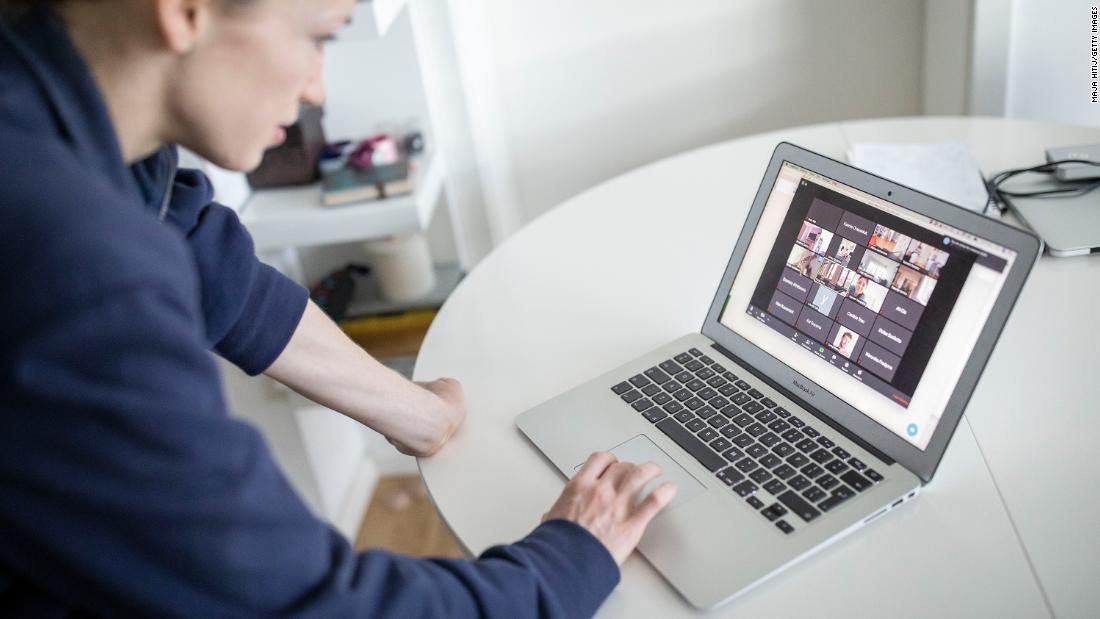 Zoom was founded in 2011, the year that IBM celebrated its centennial. But it didn't take long for Zoom to catch the blue-chip tech giant in terms of market value.

After Zoom reported a better than expected jump both in profit and sales due to the spike in usage caused by the Covid-19 pandemic, its stock shot up more than 40% in Tuesday trading.

Even with a retreat in the stock Wednesday, Zoom's market value stands at $120 billion. Shares are up more than 500% so far this year.

By contrast IBM, which has been a component of the Dow continually since 1979, has a market value of $113 billion. It posted second-quarter operating earnings of $1.9 billion in its most recent quarter, compared with the $277 million operating income Zoom earned in its most recent report.

Tomorrow's jobless claims report at 8:30 am ET is expected to show a decline to below 1 million regular first-time claims again. This happened before, in early August -- before initial claims bounced reversed course and bounced higher.

Importantly, this doesn't include claims under the government's other, pandemic-specific programs, such as the Pandemic Unemployment Assistance (PUA) program, for which claims have been on the rise.

Continuing jobless claims, which count people filing for benefits for at least two weeks in a row, are expected at a seasonally-adjusted 14 million, about half a million down from the previous report. Again here, this number doesn't include the pandemic-specific benefits.

The Labor Department is changing its methodology for seasonal adjustments. In normal times these adjustments are designed to smooth the data, but during the pandemic's unprecedented effect on the labor market they have been more distracting than helpful. DOL will review its adjustment models again at the start of 2021.

Millions of Americans remain unemployed and in need of government aid to make ends meet. Since the supplemental $600 weekly jobless benefit expired at the end of July, things have gotten harder, even after President Donald Trump signed an executive order to bolster weekly payments by $300. Yesterday, Treasury Secretary Steven Mnuchin urged Congress to agree another round of stimulus.

Recovering from the pandemic recession is no straight path: different parts of the country were hit to varying degrees by the pandemic. For example, areas more reliant on the hospitality industry are struggling to rebound.

Of the 389 metropolitan areas in the country, the majority -- 268 areas -- had a lower unemployment rate in July than the national average of 10.5%, according to the BLS. 116 areas had a higher rate than the country-wide average.

Among big cities -- defined as those with a population over 1 million as of the 2010 Census -- Los Angeles-Long Beach-Anaheim had the highest unemployment rate at 16.8% in July, followed by Las-Vegas-Henderson-Paradise and New York-Newark-Jersey City at 16.4% each.

Salt Lake City sported the lowest jobless rate among the major cities at only 5.3%.

Not adjusting for city size, El Centro in Southern California, had the highest unemployment rate of any metropolitan area in July at 26.8%.

The national jobs report for August will be published Friday morning. Economists expect 1.4 million new jobs, bringing the unemployment rate down to 9.8%, according to estimates from Refinitiv.

Wall Street opened in the green on Wednesday after starting the month off with a bang and a double record from the S&P 500 and Nasdaq Composite.

A much worse-than-expected ADP employment report didn’t taint the mood either. The ADP and government jobs numbers have differed widely throughout the pandemic, although many economists agree that the rebound is slowing down.