Stocks bounce higher after Fed holds off on rate hikes

And boom goes the dynamite.

Stocks surged after Powell said at his press conference that it's "not yet" time for the Fed to wind down its bond purchases that have been supporting the bond market, keeping yields lower, debt cheaper and corporate profits higher. That cycle, which has been in place for a year, has sent the stock market on its current record tear.

Bond investors can breathe a sigh of relief ... for now.

The Fed has been supporting the bond market by purchasing hundreds of billions of dollars of Treasuries. With the Fed anticipating much stronger-than-expected economic growth thanks to stimulus, vaccines and other factors, some on Wall Street wonder whether the Fed would start winding down those purchases.

"Not yet," Powell said to a chuckle. "We've said that we would continue asset purchases at this pace until we see substantial further progress. And that's actual progress, not forecast progress."

Doing his best impression of a broken record, Federal Reserve Chairman Jerome Powell said inflation will tick up because of the $1.9 trillion stimulus bill ... but don't fret: This ain't the 1970s, when runaway inflation led to an economic crisis.

"We could also see upward pressure on prices if spending rebounds quickly as the economy continues to reopen. ... However, these one-time increases in prices are likely to have only transient effects on inflation," Powell said at a press conference.

Powell noted, "The economy is a long way from our employment and inflation goals." So the Fed isn't taking its foot off the gas just yet.

Here's what $1.9 trillion of stimulus can do for you: The Fed now expects the US economy to grow 6.5% this year, up from its previous forecast of 4.2%.

Some of that growth is an organic return to form as hundreds of millions of Americans get vaccinated and people begin to return to normal life. But the sugar rush from stimulus will juice the economy way more than initially forecast -- just what Fed Chair Jerome Powell had long been asking Congress for.

One key number from the Fed's policy statement today that investors will be staring at for a while: 2.4%.

That's the 2021 inflation expectation, up from the Fed's previous forecast of 1.8%. To say investors have grown concerned about inflation is an understatement. It has become the top concern on Wall Street, according to a Bank of America survey. Yup, more than Covid.

But the Fed doesn't seem too concerned about inflation today — and neither does Wall Street, for the moment. The price spike could be temporary, a one-off blip from the government handing out free money to 85% of Americans.

Although the Fed anticipated the US economy would make "substantial further progress" by the end of the year, it said nothing about tapering its government bond purchases, which have been propping up the Treasury market. If the economy gets substantially better by the end of the year, though, the Fed may wind down its bond-buying, potentially sending yields higher and making Wall Street worriers even more concerned.

The Federal Reserve is taking care of investors on Wall Street today, leaving rates unchanged and signaling that a rate hike isn't coming until at least next year -- and very likely not until 2023.

Investors are growing nervous about an overheating economy and the prospect that the Fed will be forced to raise rates sooner than expected to counteract $2 trillion of stimulus. But the Fed said in its policy statement that it will leave rates unchanged, noting the economy still faces many challenges with the ongoing pandemic.

Four Fed officials predicted rates would start to go up next year -- seven thought the Fed would wait until 2023.

One reason for concern: The Fed anticipates all that stimulus President Joe Biden just put into action will send prices higher than expected. They forecast inflation of 2.4% this year, up from their previous estimate of 1.8%. That's slightly above the Fed's target of 2%, but Fed Chairman Jerome Powell signaled earlier this month that any rise in prices should be temporary.

While Wall Street is worrying about inflation and the Fed, millions of Americans are still out of work due to the pandemic.

Another 700,000 first-time claims for unemployment benefits are expected in tomorrow's Labor Department report. That would be the lowest number of claims since the pandemic started and a good sign that things are finally, albeit slowly, improving a year after the economy shuttered because of the coronavirus outbreak.

Continued jobless claims, which count people who have filed for benefits for at least two weeks in a row, are expected at 4.1 million, little changed from the week before.

The Federal Reserve's monetary policy update is about an hour away. So what is Wall Street looking for from the central bank?

For one, the Fed will put out an updated forecast, known as the dot plot. A lot could be revealed there, including its expectations for more growth and lower unemployment given the recent rounds of fiscal stimulus.

But the real question is how many members of the Fed will predict higher interest rates down the line, said David Kelly, chief global strategist at JPMorgan Asset Management.

"That's what the market will focus on," he told Alison Kosik on the CNN Business digital live show Markets Now.

Wall Street is worried about higher inflation over the summer months, which has pushed bond yields higher. The 10-year Treasury bond yield rose to 1.67% -- a 13-month high --today.

"We think of these as high bond yields relative to history," Kelly cautioned. 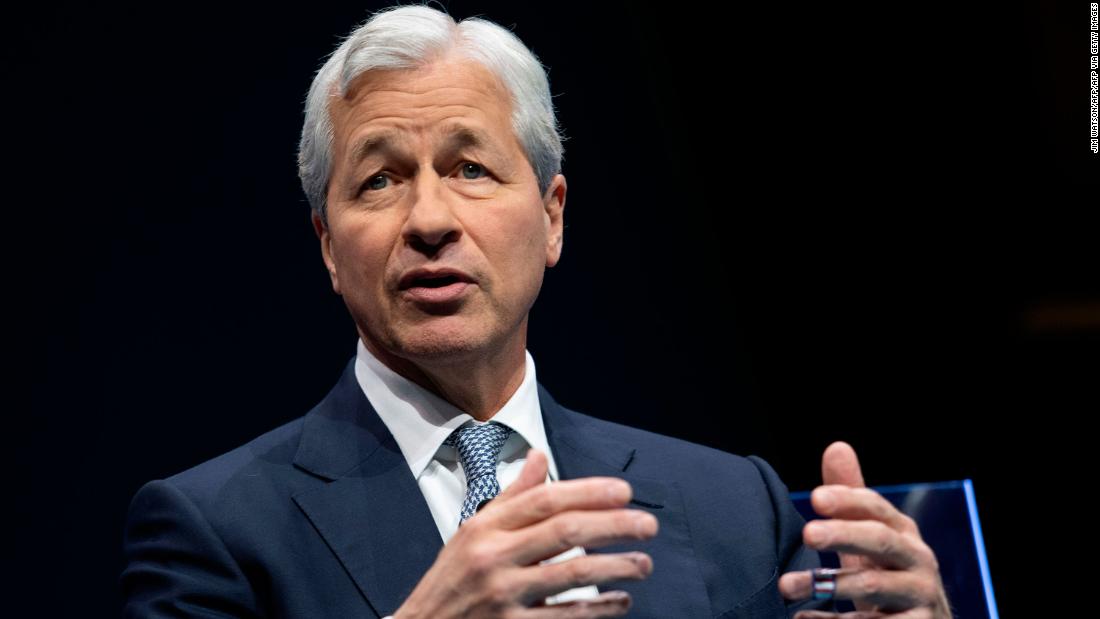 In a message to all JPMorgan employees titled “Enough is enough,” Dimon on Wednesday called out the violent and verbal attacks against the Asian and Pacific Islander (API) community since the pandemic began more than a year ago.

“On streets, online and in many Asian-owned small businesses, we are seeing physical assault, verbal harassment and refusal of service,” the JPMorgan boss wrote.

Dimon cited yesterday's killings of eight people in the metro Atlanta area. Six of the victims were Asian, but authorities have not yet determined a motive.

“These racist acts cannot — and will not — be tolerated,” Dimon wrote. “These events are impacting our colleagues, families, friends and partners in the API community.”

The JPMorgan CEO said the company is reviewing additional steps it can take to support the Asian community, and he urged victims and witnesses to report their concerns.

“Our fight for fair treatment and equity is not for any one group — it’s for all,” Dimon wrote. “We condemn racism in any form and, with fierce determination, stand united to defend equity, diversity and inclusion for all communities.”