US stocks get back on track 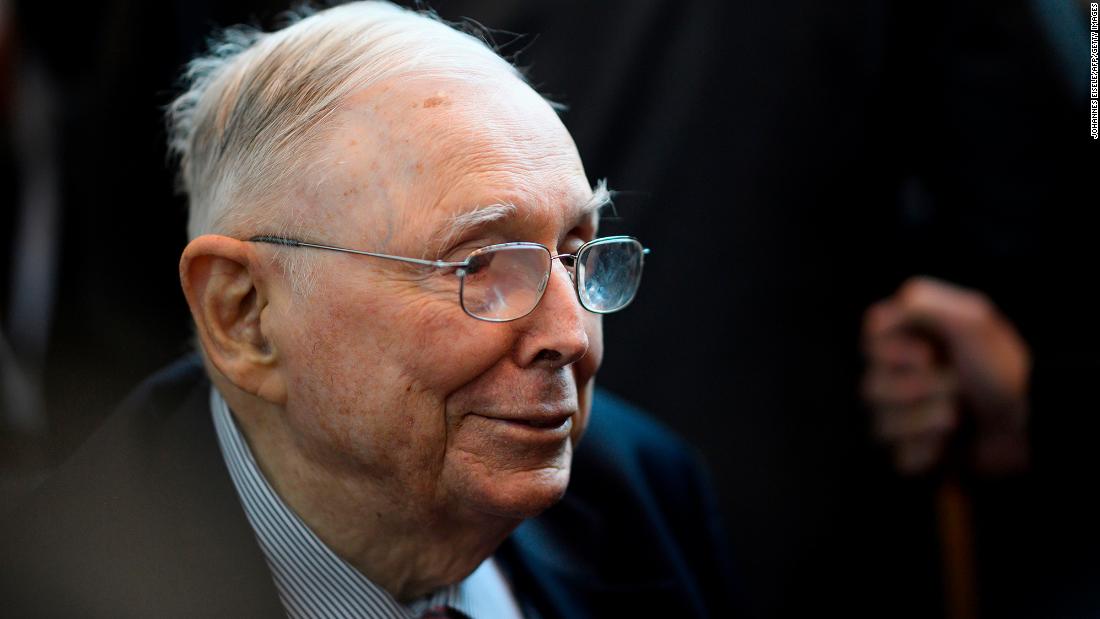 "I think it must end badly but I don't know when," Munger said at the annual shareholder meeting for Daily Journal (DJCO), the Los-Angeles based newspaper publisher where he is chairman. (The meeting was webcast on Yahoo Finance, just as Berkshire's will be in May.)

Munger warned that it is dangerous for investors to keep buying stocks in a "frenzy" just because prices are going up. He compared the GameStop surge to horse racing. And he said the popularity of SPACs were an "irritating bubble" and that "the world would be better off without them."

Like Buffett, Munger is not known for mincing words, but he did have some nice things to say. Munger argued that "value investing will never go out of style" and that Amazon (AMZN) CEO Jeff Bezos, who recently announced plans to step aside from that post, is one of the smartest businessmen ever.

Berkshire owns a stake in Amazon and the company partnered with the tech/retail giant on its since shuttered Haven health care venture.

Weekly initial jobless claims have been stubbornly high for months. We're nearing the anniversary of the pandemic and are still looking down the barrel of claims some four times higher than before the viral outbreak.

Economists predict another 838,000 first-time claims for jobless benefits in tomorrow's report from the Department of Labor. That would be a decrease from the prior week's 861,000 but still nowhere near where we'd like to be.

Continued claims, which count applications filed for at least two weeks in a row, are expected at 4.5 million, flat from the prior week.

These numbers don't yet include benefit claims filed under the government's various pandemic-specific programs.

But there's more high profile data on the docket for tomorrow: we'll also get the second reading of fourth quarter gross domestic product, the broadest measure of economic activity.

Economists predict a slight improvement to an annualized growth rate to 4.2% versus the first reading that we got in January that showed a 4% rate.

Even though the Federal Reserve has long said that it isn't planning to raise rates any time soon, investors are spooked. Higher interest rates would weigh on stocks because it would make it more expensive for companies to borrow money.

So is everyone concerned about a sudden spike in inflation that might force the Fed's hand to hike rates out of nowhere? Not so much.

"What the Fed ultimately wants, the Fed will get," said Brad Neuman, director of market strategy at Alger.

According to Neuman, the Fed wants inflation to go higher -- which makes sense given that consumer prices only rose 1.4% in 2020, far below the Fed's long-run target of 2%. But the central bank might not actually want higher real rates.

Anxiety levels have soared during the pandemic, making meditation apps ever more popular.

The valuation of Calm is valued at $2 billion at this point and its co-founder and co-CEO Michael Acton Smith thinks the company could be valued at as much as $100 million or more. The business is also likely to do an IPO eventually, Acton Smith told Alison Kosik on the CNN Business digital live show Markets Now.

Calm, as well as its competitors, use celebrities to take meditation mainstream.

"One of the biggest upticks was in the summer when Harry Styles launched a sleep story," Acton Smith said.

And more celebrity collaborations are coming, he added.

Bond yields are off the day's highs and stocks are back in the green. But worries about a potential spike in inflation when the economy fully reopens, which could force the Federal Reserve's hand with respect to interest rates, continue among investors.

But Moody's chief economist Mark Zandi isn't concerned about that.

"I don't think inflation is an issue, certainly not at this point," he said on the CNN Business digital live show Markets Now.

"Chairman Powell made a good point, over the past years the problem hasn't been high inflation, it has been low inflation," Zandi said with respect to Federal Reserve Chairman Jerome Powell's testimony on Capitol Hill this week.

Given that, it's hard to imagine suddenly having a high inflation problem.

We also have a long way to get back to anything that might be considered full employment, Zandi added, which means more help from Washington is needed. Unemployment remains high, and the national average doesn't reflect the number of people who have left the workforce altogether.

President Joe Biden's $1.9 trillion package is currently being debated in Washington. "If I were king for a day, I think i would use that money a little differently than what's in the American Rescue Plan," Zandi said. He added that "this thing needs to get passed fast, and with that in the backdrop I’m willing to cut some corners to get this thing done."

It's a repeat of yesterday: Powell's not-exactly-new message that more needs to be done to get the economy back to its previous strength, and his reiteration that the Fed is seeing a long-run spike in inflation, has knocked Treasury yields off their highs and allowed stocks to climb.

The primary trade association for the US retail industry is predicting a bumper 2021 as the economy rebounds from the pandemic and more people get vaccinated.

The National Retail Federation said Wednesday that it forecasts retail sales to grow between 6.5% and 8.2% to more than $4.3 trillion this year. Last year, sales grew 6.7%, NRF said.

The group expects online spending to drive retail sales: Online sales will rise up to 23% this year, the group predicts.

Millions of Americans remain unemployed as a result of the pandemic, and many will be able to return to work when the economy fully reopens— but some will be left behind.

"Not all those jobs are going to come back," Federal Reserve Chairman Jerome Powell told the House Financial Services Committee.

Automation is one reason for that, Powell said. The use of technology that eliminates human jobs has been a long-run trend, but the pandemic has accelerated this process, he added.

“There’s going to be a need for training and replacement" to deal with this issue in the wake of the recovery, he told lawmakers.

2021 will be a big year for the possibility of a digital US dollar, Federal Reserve Chairman Jerome Powell told members of the House Financial Services Committee.

"This is going to be the year in which we engage with the public pretty actively," Powell said.

Fed officials have previously discussed the potential for the central bank to create a digital currency. First it would need to address policy and technical questions, as well as solicit public feedback. The Fed is also collaborating and sharing work with other central banks in the world on the topic, Powell said.

"I think it makes sense for central banks to look at it and I'm aware the Fed is looking at it," Treasury Secretary Janet Yellen said at New York Times DealBook DC Policy Project earlier this week.

Representative Patrick McHenry, the ranking member on the Financial Services Committee, said during the hearing that he thinks "the project is vital."

Among many other considerations, the Fed would need to create a digital currency in a way that does not undermine the existing, functioning system in the United States, Powell said.