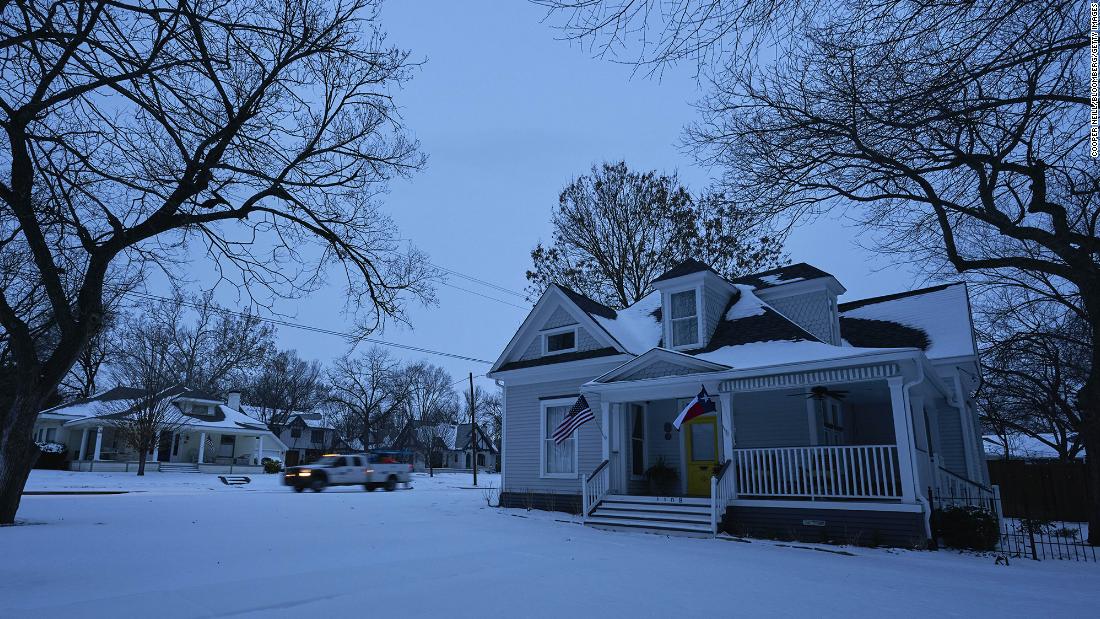 Neil Chatterjee, a top federal energy regulator, is pushing back against those blaming frozen wind turbines for the life-threatening blackouts in Texas.

“No single fuel source can be blamed for this event,” Chatterjee, a commissioner on the Federal Energy Regulatory Commission, told CNN Business on Wednesday. “Before we point fingers, we need to figure out why this happened.”

Chatterjee, a Republican from Kentucky who previously led FERC, acknowledged that wind generation was lower than expected in Texas during the deep freeze.

“Some wind capacity wasn’t available. But neither was gas, neither was coal, neither was nuclear,” he said. While wind is booming in Texas, it comprises less than a quarter of the state’s sources of electricity. The majority comes from fossil fuels.

Chatterjee was quietly demoted last November by former President Trump – a move the regulator said at the time may have been retribution for his support of clean energy.

In an interview with Fox News on Tuesday, Texas Governor Greg Abbott blamed the blackouts on wind power. Chatterjee, by contrast, said he remains confident that America can transition to a “cleaner and greener” electric grid.

“Let’s get the politicians out of this,” Chatterjee said. “Let the engineers, economists and experts figure it out.”

This week's winter storm and deep freeze have left millions without power, particularly in Texas — which is striking as it produces more electricity than any other US state. And Occidental Petroleum CEO Vicki Hollub says the crisis has taught Texas hard-won lessons.

Speaking at the International Energy Forum conference, Hollub — who herself hasn’t had power for 48 hours and is working from a friend’s condo — specifically cited a lack of preparedness among renewable energy producers.

“It was something that is so unprecedented that part of our grid was just not prepared for it...It's been very much a lesson for the state of Texas.”

But experts have noted that while Texas’ wind turbines were not winterized for these deep-freeze conditions, the cold is also having a major impact on oil, natural gas, coal and nuclear. Texas, which unlike other states has isolated its grid from the rest of the country, still relies on fossil fuel for most of its power.

US treasury yields climbed this week, underlining some concerns about US inflation going up and interest rates eventually rising.

For investors, it's key to look at the steepening of the yield curve and consider the interest rate-sensitivity of their portfolios, Kristen Bitterly, regional head of investments for North America at Citi Private Bank, told Alison Kosik today on the CNN Business digital live show Markets Now.

As a result, Bitterly said she and her team are "ensuring that we're adding alternative sources of yield," such as global stocks or emerging market fixed income assets.

But there are still opportunities in the stock market, even though it is near all-time highs, with the Dow setting another record yesterday.

Even so, there are definitely some corners of the market that have seen outsized gains, and that might come back to bite investors, Bitterly said.

Americans spent a lot of time at home during the pandemic, and for many, that meant spending more to be as comfortable as possible while hunkering down.

For Parachute, seller of sheets, towels, robes and other "comfort" products, this was good news, according to Ariel Kaye, founder and CEO of the company.

Even though Parachute is primarily digital brand, the company has reopened its brick and mortar stores, and consumers are eager to come in to see and feel products, Kaye said.

"We really think that our products can help your health and happiness at home," Kaye said.

Stocks are broadly lower so far today, but the market is still near all-time highs.

Hopes and expectations for more government stimulus and an eventual full reopening of the economy are driving stock gains.

"The IPO market has opened up about as wide as can be," he added.

Going public through Special Purpose Acquisition Companies, publicly traded blank check firms that buy other businesses, has become a trend of late. But Patricof thinks the euphoria should be viewed cautiously, he told CNN host Alison Kosik on the show.

Patricof launched Primetime Partners over the summer to invest in startups that cater to America's aging investors.

It's lunchtime and the stock market isn't looking so hot.

Despite a whole bunch of better-than-expected economic reports this morning, stocks are down.

On Tuesday US Treasury yields — which track future interest rate expectations — had risen. Their climb paused today, but the message for the stock market is clear: Interest rates will rise again after the pandemic crisis is over, and that will keep the stock rally in check.

Today's economic reports were better than expected, but will that streak continue?

Economists predict another 765,000 first-time jobless claims in tomorrow's weekly Labor Department report. While that would be an improvement from the 793,000 claims the week before, these numbers are still far too high for comfort.

The claims in last week's report were nearly four times as high as in the same period last year, before the pandemic hit.

Continued claims, which count worker who have filed claims for at least two weeks in a row, are expected at 4.4 million.

America's jobs crisis is ongoing and millions of people remain unemployed. Economists expect that the vaccine rollout will lead to an eventual full reopening of the economy and boost the labor market.

But especially with the slow rollout in the first few months, it's clear that won't happen overnight.

US stocks dipped at the opening bell in New York.

Following a record high for the Dow on Tuesday and multiple better-than-expected economic reports, investors may just sit back and take some profits.

Industrial production increased by 0.9% in January, more than the 0.5% economists had predicted.

And that's still not all: Capacity utilization stood at 75.6% last month, compared with 74.8% expected.

Phew! It's been a busy but upbeat morning for economic data.