Brevard County, home to the Kennedy Space Center launch site, was briefly under a tornado warning. That warning ended at 2:15 pm ET without any visible twisters coming near the launch site.

Flashes of lightning and thunder claps are a common occurrence, but weather officials are hoping it will pass before takeoff at 4:33 pm ET.

This is a dream come true, I think for me and everyone at SpaceX. This is not something I ever thought would happen. When starting SpaceX in 2002, I really did not think this day would occur.

NASA astronauts Bob Behnken and Doug Hurley are at the launch pad and boarding the Crew Dragon spacecraft.

Crew Dragon is currently sitting on top of the 230-foot SpaceX Falcon 9 rocket.

Meanwhile, an alarm rang out at the press site, warning of severe weather conditions. It's possible heavy thunderstorms will roll through Kennedy Space Center.

But if they clear before liftoff, Behnken and Hurley could still take off today.

If not, NASA and SpaceX will plan to try again on May 30. 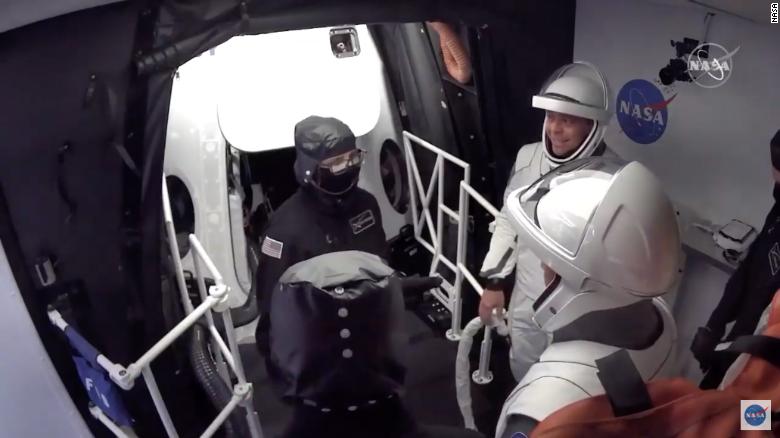 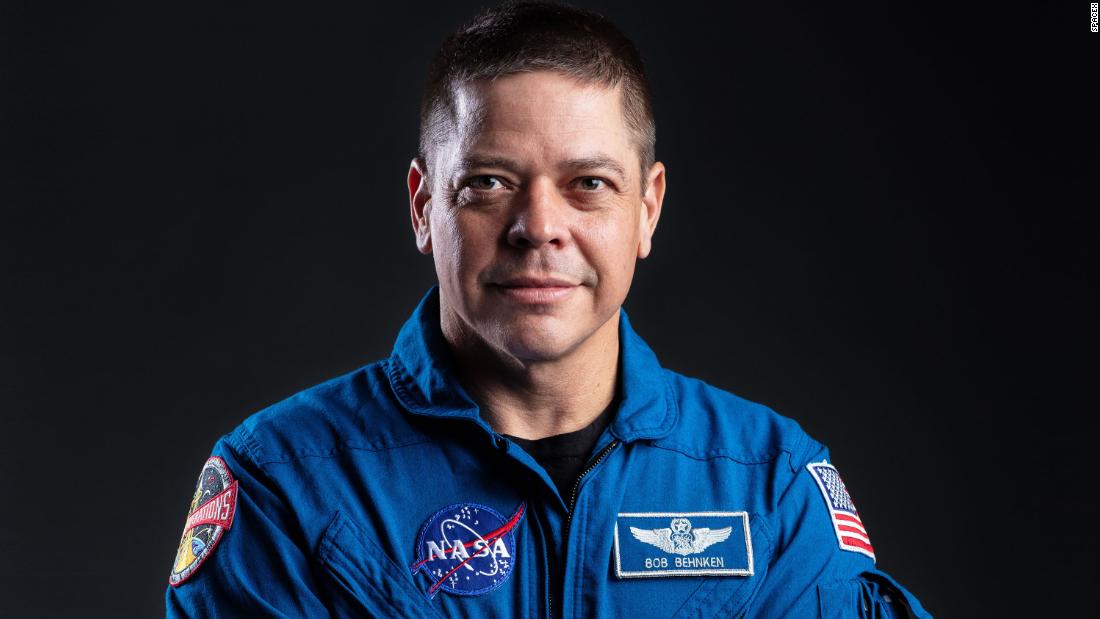 Robert "Bob" Behnken, 49, and his crewmate, Douglas Hurley, were both military test pilots before they joined NASA in 2000. The space agency has a long history of selecting test pilots, who spend hundreds of hours flying around in experimental supersonic aircraft, to be astronauts.

It's probably a dream of every test pilot school student to have the opportunity to fly on a brand new spaceship.

Role in this mission: Joint operations commander. He will be responsible for some of the SpaceX Crew Dragon spacecraft's major milestones, including docking with the International Space Station and undocking. 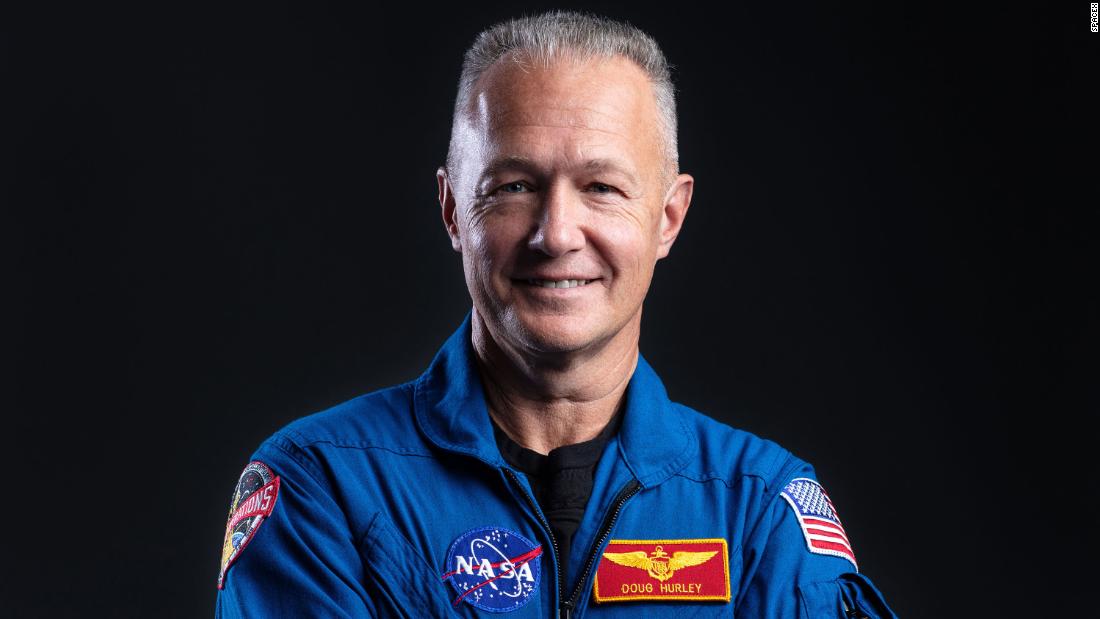 One half of the duo that will pilot this historic spaceflight is Douglas "Doug" Hurley, 53. Both Hurley and his crewmate, Robert Behnken, were selected to be NASA astronauts in 2000 and are veterans of Space Shuttle missions. They're also longtime friends who attended each others' weddings.

It has been such a long road, and it's kind of been a personal journey...to transition from the Space Shuttle era to this next era of spaceflight.

Role in this mission: Spacecraft commander. He's responsible for keeping things on track during launch and for landing and recovery when the astronauts return from space.

Reporters lined the street as astronauts Bob Behnken and Doug Hurley passed by on the Saturn Causeway — the road that will take them to the launch pad.

Behnken and Hurley are now preparing to board SpaceX's Crew Dragon capsule, where they'll sit for the next three hours as NASA and SpaceX prepare for liftoff.

If the weather looks ok in the hours ahead, liftoff is slated to occur at 4:33 pm ET.

Officials said at about 1:45 pm ET that the odds of favorable weather stand at about 50-50. 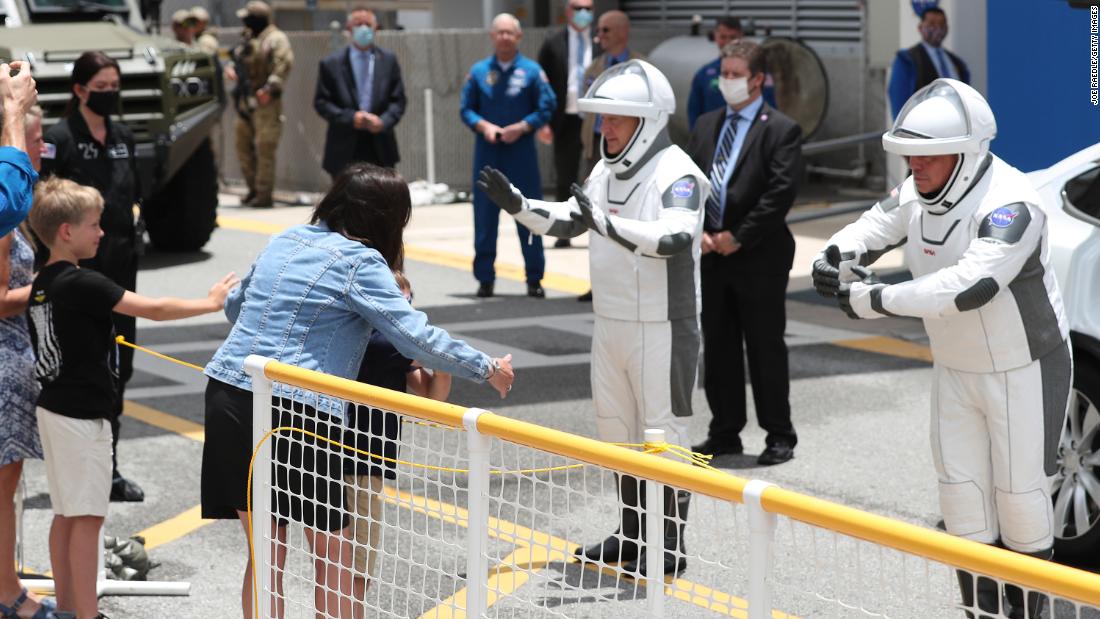 Vice President Mike Pence, SpaceX CEO Elon Musk and NASA Administrator Jim Bridenstine will see the astronauts off — along with the astronauts' families. Behnken and Hurley are both married to fellow NASA astronauts and have small children.

To say farewell, the men, suited up in the SpaceX spacesuits, offered air hugs to their kids.

This mission will mark a triple crown of historic landmarks:

The NASA astronauts are expected to begin making their way to the launch pad shortly. Their mode of transportation? Two Tesla Model X's emblazoned with NASA logos.