This is a question a lot of space nerds — and, apparently, Jeff Bezos' team at Blue Origin — care a lot about.

There is no single definition of "outer space." And deciding where space begins is largely an exercise in pinpointing exactly where the Earth's atmosphere becomes less troublesome than the Earth's gravitational pull. But there is no exact altitude where that happens. The atmosphere thins out, but the "vacuum of space" is never really devoid of matter entirely. It's a blurry line.

Where does space begin? Does it begin when you look up, and the sky goes from blue to dark and speckled with stars? What about when you just go so high enough that you float, like you see with astronauts on the space station?

An orbiting spacecraft moves at the right speed so the curve of its fall matches the curve of Earth. Because of this, the spacecraft keeps falling toward the ground but never hits it. As a result, they fall around the planet. The moon stays in orbit around Earth for this same reason. The moon also is falling around Earth.

And while Bezos and his fellow passengers won't be going into orbit, they will be experiencing microgravity, as they freefall from the peak of their journey, very similar to what astronauts experience on the ISS. Except they're not moving at over 17,000 mph like the people on the ISS, so the New Shepard capsule and rocket will come screaming back down to Earth rather than continuously circling the planet.

Richard Branson's flight aboard the space plane developed by his space company, Virgin Galactic, nine days ago reached more than 50 miles high, which is the altitude the US government considers the beginning of outer space.

Bezos' flight will hit more than 62 miles high — also known as the Kármán line — which is the altitude internationally recognized as the boundary.

Exactly which is correct — the US-accepted 50-mile mark or the internationally accepted 62-mile Kármán line — is widely debated and mostly arbitrary.

But when we say the international community "recognizes" or "accepts" the 62-mile Kármán line as the edge of space, we're mostly talking about one organization: The the Fédération Aéronautique Internationale, which keeps track of world records in spaceflight such as tallying how many people have become astronauts.

But even the FAI has said it's considered changing its definition to the US-recognized 50-mile mark in response to research from Jonathan McDowell with the Harvard-Smithsonian Center for Astrophysics.

What you should know: It's not a huge deal. And people that fly on Virgin Galactic and Blue Origin — both US-based companies — will still be in the American-recognized version of outer space.

Though it should be noted, neither company is sending passengers to orbit.

Blue Origin's New Shepard launch site — named simply "Launch Site One" — is in the middle of a massive private ranch that Bezos owns in rural West Texas. And it's very rural.

It's roughly a 30-minute drive north of Van Horn, Texas, a town that's home to about 2,000 people, a handful of restaurants, a small local paper, and an Old West-style downtown strip.

Blue Origin broke ground on its Launch Site One in 2006, and it didn't have paved roads until 2018. And though the launch site is isolated, Blue Origin workers spend quite a bit of time in the Van Horn area. (About 275 people work full-time at the site.)

Employees booked up the rooms at most of the local hotels. And a few businesses have put up signs of encouragement for Blue Origin ahead of today's flight, including this new mural visible from a Van Horn roadway.

One of the biggest tips? Beware of critters.

West Texas is known to have an array of pests lurking around, most notably rattlesnakes.

The team of four people traveling in Blue Origin's rocket ship New Shepard will include the youngest and the oldest people to ever fly to space, according to the company.

At 82 years old, Wally Funk — who trained for NASA's Mercury program but was denied the opportunity to go to space — will become the oldest person to travel to space if today's flight goes off as planned.

Funk volunteered as a member of the Mercury 13 program, otherwise known as the "Women in Space Program," in February 1961, which was a privately-funded effort intended to begin training women to fly in NASA's earliest space programs. The 13 women in the program undertook all of the training and testing that the seven men selected by NASA for the Mercury spaceflight program undertook.

Meanwhile, 18-year-old Oliver Daemen, a recent high school graduate who plans to attend the University of Utrecht in the fall, will become the youngest person in space.

He was a participant in the auction Blue Origin held for the final seat on the rocket, but he was not the top bidder. The mystery bidder — who put up a whopping $28 million and asked to remain anonymous — had to bow out because of "scheduling conflicts," Blue Origin said last week.

A source familiar with the matter said Daemen's spot was purchased for him by his father, Joes Daemen, who is the founder and CEO of Somerset Capital Partners, an investment firm based in the Netherlands.

Jeff Bezos and his brother Mark Bezos are the other two people flying in the rocket today.

Amazon founder Jeff Bezos is launching into space today aboard a Blue Origin spacecraft he funded.

This is the first time humans will go to space aboard a Blue Origin vehicle, although the rocket ship is autonomous and does not require a pilot.

There are six seats aboard the capsule, but only four seats will be filled.

Here are the other three people who will ride alongside Jeff Bezos:

Jeff Bezos, his brother, an 82-year-old pilot and an 18-year old recent high school graduate are scheduled to take off for space soon aboard the New Shepard, the rocket ship made by Bezos' space company, Blue Origin.

Everyone on board must comply with a set of requirements laid out by Blue Origin.

According to the company's website, there are limitations on who can take a New Shepard flight:

They’ll spend another hour or so at the training center before departing for the actual launch pad, where they’ll get into the New Shepard capsule.

Liftoff is expected at 9 a.m. ET. The entire flight will take about 11 minutes.

The New Shepard rocket is now being loaded with propellant. The company likes to say that it basically "runs on water" because the fuels it breathes on are super-chilled liquid oxygen — called LOX — and liquid hydrogen. 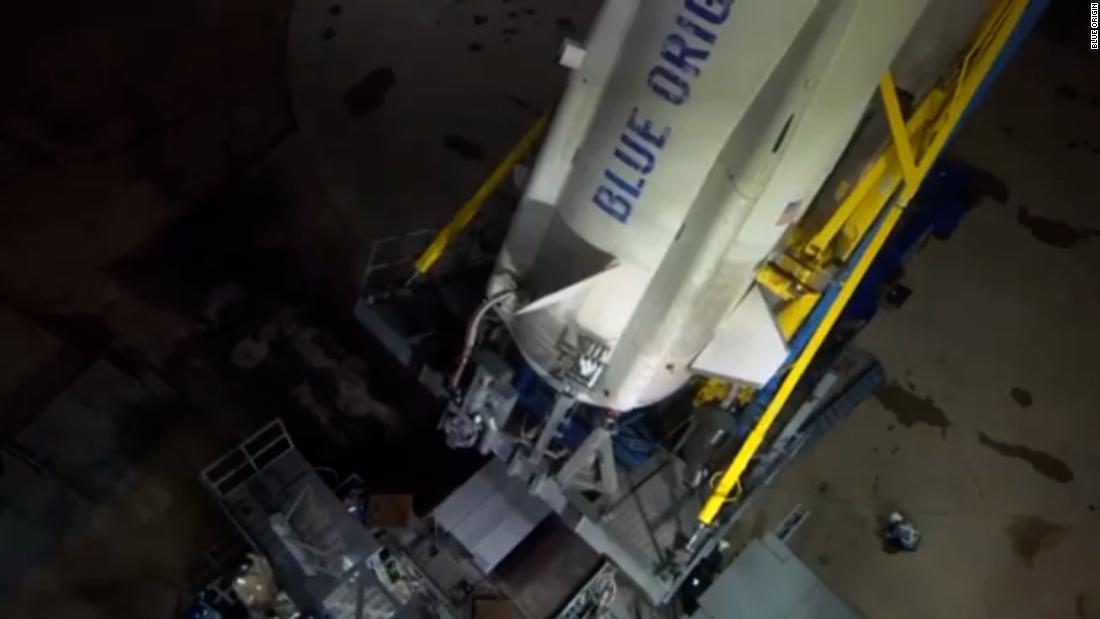 Blue Origin rolled its New Shepard rocket and capsule out to its launch pad in the wee hours of Tuesday morning, around 1:30 a.m. local time.

There are four people flying today on Blue Origin's New Shepard capsule, and while one of them — 82-year-old Wally Funk — is a pilot, her decades of experience aren't required to fly the rocket.

That's because New Shepard is fully autonomous. Blue Origin has spent the better part of the last decade running the suborbital New Shepard rocket through a series of successful test flights that have been fully automated and, thus far, carried no humans.

Today's flight will mark the first time carried people on board.