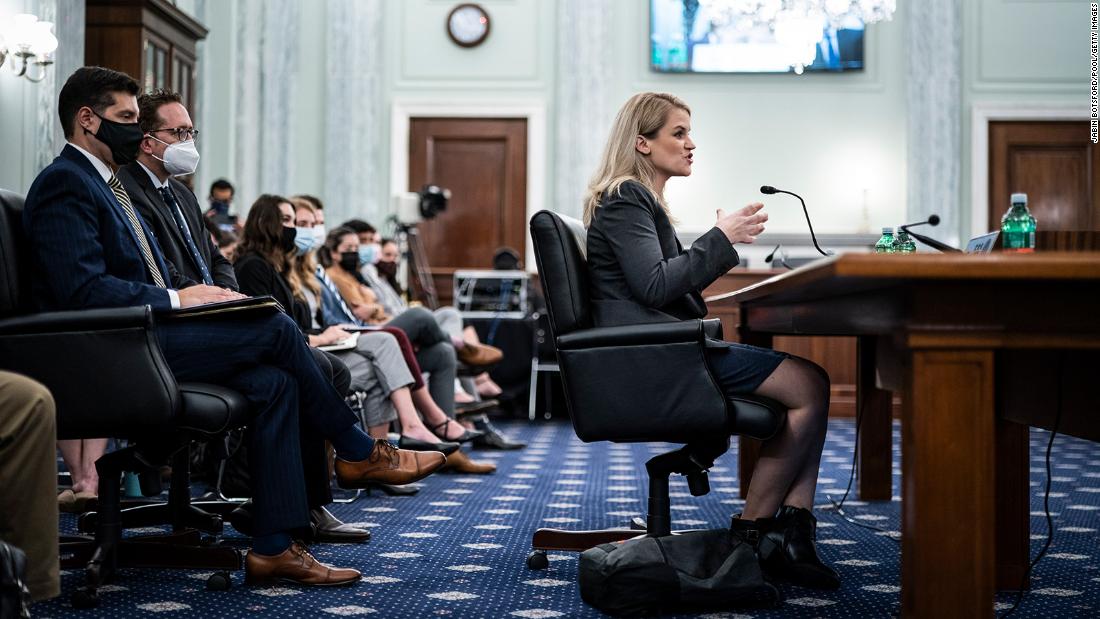 The Facebook whistleblower who released tens of thousands of pages of internal research and documents testified before a Senate committee today about her experience working in the company and what steps she believes Congress should take against the social media giant.

Frances Haugen, a former Facebook product manager who worked on civic integrity issues at the company, faced questions from the Commerce subcommittee about what Facebook-owned Instagram knew about its effects on young users, among other issues.

If you are just reading in, here are some key things she told lawmakers:

Monica Lewinsky today praised a Facebook whistleblower's testimony before Congress, drawing a parallel between the bullying many young people face on the platform and the mental health struggles she endured in the 1990s amid the scandal surrounding her affair with then-President Bill Clinton.

"I think it's worth mentioning that Frances Haugen, in testifying, how brave she was," said Lewinsky, speaking on CNN. "...To come forward as a whistleblower...is very brave."

Lewinsky, who has called herself the "patient zero" of internet shaming, said she believes it is now clear that social media companies have a bigger role to play in minimizing potential harm to their users.

"I absolutely think that all of the social media companies, even though they are trying, they can definitely do better and they need to do better," she said.

Facebook, under intense scrutiny in Congress, has invested heavily in recent years to influence Washington.

In the first six months of this year alone, the social media giant and its subsidiaries spent more than $9.5 million on lobbying, Senate records show. That made it the second-highest spender on lobbying this year among all Big Tech companies, according to Open Secrets, a nonpartisan group that tracks money in politics and ranks lobbying spending.

And last year, Facebook was the biggest Washington spender on lobbying in the world of Big Tech, Open Secrets found — plowing some $19.6 million into its efforts to shape US policy. Facebook’s lobbying agenda ranged from trade to Section 230 of the Communication Decency Act, which protects companies’ ability to moderate content, its filings show.

On Tuesday, a Facebook whistleblower – former product manager Frances Haugen – urged Congress to take action to rein in the company. She said its products “harm children, stoke division and weaken our democracy” as she testified before a Senate subcommittee on consumer protection.

Members of that subcommittee, however, also have benefited from the company’s political activity. Facebook’s PAC has donated nearly $190,000 to the campaign committees and leadership PACs of most lawmakers on the panel, Federal Election Commission records show. All but one of the 12 lawmakers on the subcommittee – Massachusetts Sen. Edward Markey – has received donations from the social media behemoth, according to federal records.

Forbes first reported on the donations to members of the panel.

"It is not true," said Bickert, when asked by CNN's Alisyn Camerota if the platform's algorithms are designed to push inflammatory content in order to draw more clicks and engagement.

"We do the opposite, in fact, and if you look in our transparency center, you can actually see that we demote, meaning we reduce the visibility of engagement bait, click bait, and why would we do that? One big reason is for the long-term health of our services, we want people to have a good experience," she said.

Bickert was responding to whistleblower Frances Haugen's testimony on Capitol Hill earlier in the day who said the company puts "their astronomical profits before people" and its products “harm children, stoke division and weaken our democracy." She called for congressional action against the social media giant.

In one portion of the hearing, Sen. Amy Klobuchar, a Democrat from Minnesota, asked the former Facebook employee if the company is using its algorithm to push "outrageous content" promoting eating disorders to young girls. She said that Facebook "knows it is leading young users" to content related to eating disorders. The whistleblower also noted that Facebook's artificial intelligence (AI) systems "only catch a very tiny minority of offending content."

Speaking on CNN this afternoon, Bickert did acknowledge the company could "do better" for some of its users.

"Now, we need to do better for those who are having a bad experience," she said.

More background: Haugen's identity as the Facebook whistleblower was revealed on "60 Minutes" Sunday night. She previously shared a series of documents with regulators and the Wall Street Journal, which published a multi-part investigation showing that Facebook was aware of problems with its apps, including the negative effects of misinformation and the harm caused by Instagram, especially to young girls, and that the company has tried to hide that evidence.

"Frances Haugen wants to fix Facebook, not burn it to the ground," Blumenthal said in a video call after the hearing.

Blumenthal said Haugen had concrete recommendations on how to improve Facebook to make it more transparent and protect children. Haugen gave hope to parents concerned about the effects of social media on their children, the senator said.

The lawmaker said he is convinced that other whistleblowers will come forward after Haugen's testimony. 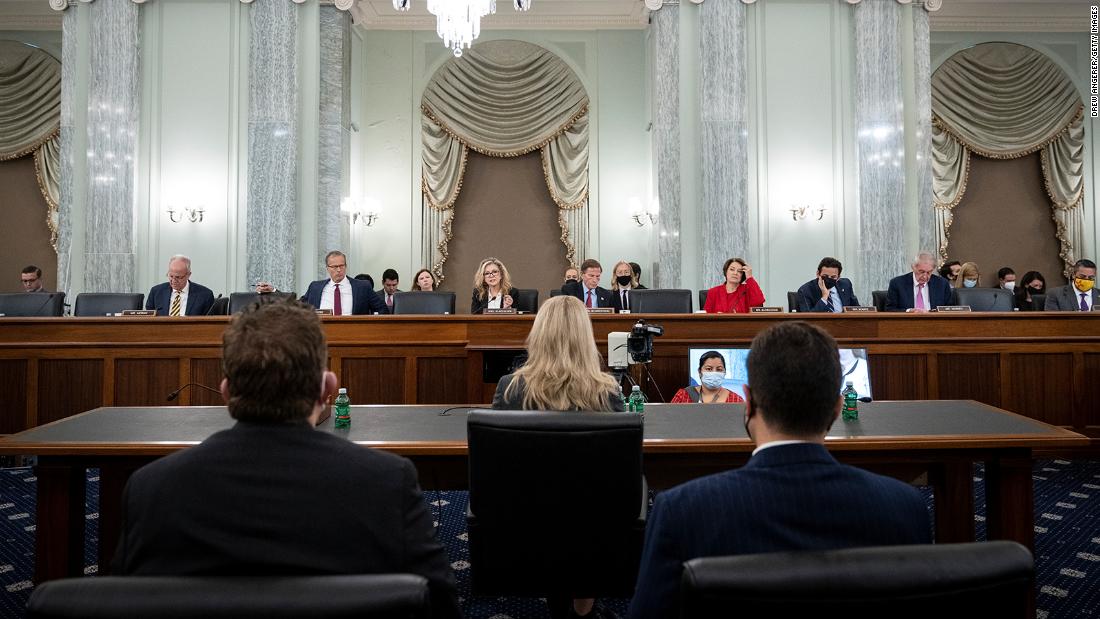 Senators on both sides of the aisle praised former Facebook employee Frances Haugen for her powerful testimony on Capitol Hill today.

In front of a packed press gallery in the Russell Office Building, one lawmaker pointed how meetings of a subcommittee don’t always attract this much attention.

Haugen did not let the senators down – breaking down how platforms like Facebook and Instagram work and cause harm in a way that was accessible and mostly jargon-free.

Hearings on Big Tech can regularly devolve into partisan point-scoring, but Haugen deftly handling lawmakers’ questions – maintaining regulation does not have to mean censorship.

“You mentioned earlier concerns around free speech,” she told GOP Sen. Ted Cruz. “A lot of the things that I advocate for are around changing the mechanisms of amplification, not around picking winners and losers in the marketplace of ideas."

“What's cool about Haugen's testimony and this hearing is a real focus on amplification and algorithm design and not just censorship and bad info,” Charlie Warzel, a leading technology commentator, tweeted. “It feels like the advancement of the Facebook conversation/critique that a lot of close followers have been hoping for.”

When Haugen’s three hours or so of testimony concluded, she picked up her black backpack and walked calmly for the exit – it is, however, unlikely to be her last time in a hearing room like this.

Democratic Sen. Richard Blumenthal, who chairs the Senate Commerce subcommittee on consumer protection, suggested the panel may ask her back to share further insights about Instagram’s harms on children and Democratic Rep. Adam Schiff indicated yesterday she may be invited to appear before the House committee investigating the Jan. 6 insurrection to testify on Facebook’s role in it.

Facebook earlier this year gave users on Facebook and Instagram the option to hide public like counts on their posts in an effort to reduce the pressure users feel to gain popularity. But Haugen said this isn’t sufficient to address teen mental health concerns on the platforms.

Haugen said that based on the internal research she has viewed, “as long as comments are allowed on posts on Instagram, just taking likes off Instagram doesn’t fix the social comparison problem.”

“Teenage girls are smart, they see that Sally is prettier than them, her pictures are really good, she gets tons of comments, she doesn’t get very many comments,” she said. “So I do think we need larger interventions than just removing quantitative measures.”

For the past few years, there have been mounting calls from regulators in the United States and Europe to break up tech giants like Facebook. Lawmakers, publishers and other groups have criticized Facebook, in particular, for its handling of misinformation, its history of buying or copying rivals, and its data privacy practices, among other issues.

But according to Haugen, breaking up Facebook won't eliminate the potential risks the company poses to society.

The problem lies in the design of algorithms and engagement-based ranking that surface potentially concerning content for users, and the limitations of artificial intelligence to address it, Haugen explained.

"What I'm scared of is that Facebook is the internet for lots of the world. If you go to Africa, the internet is Facebook. If you split Facebook and Instagram apart, it's likely that most advertising dollars would go to Instagram and Facebook will continue to be this Frankenstein that is endangering lives around the world. Only now there won't be [advertising] money to fund it."

Haugen emphasized collaborative solutions with Congress, or else "these systems are going to continue to exist and be dangerous even if broken up." 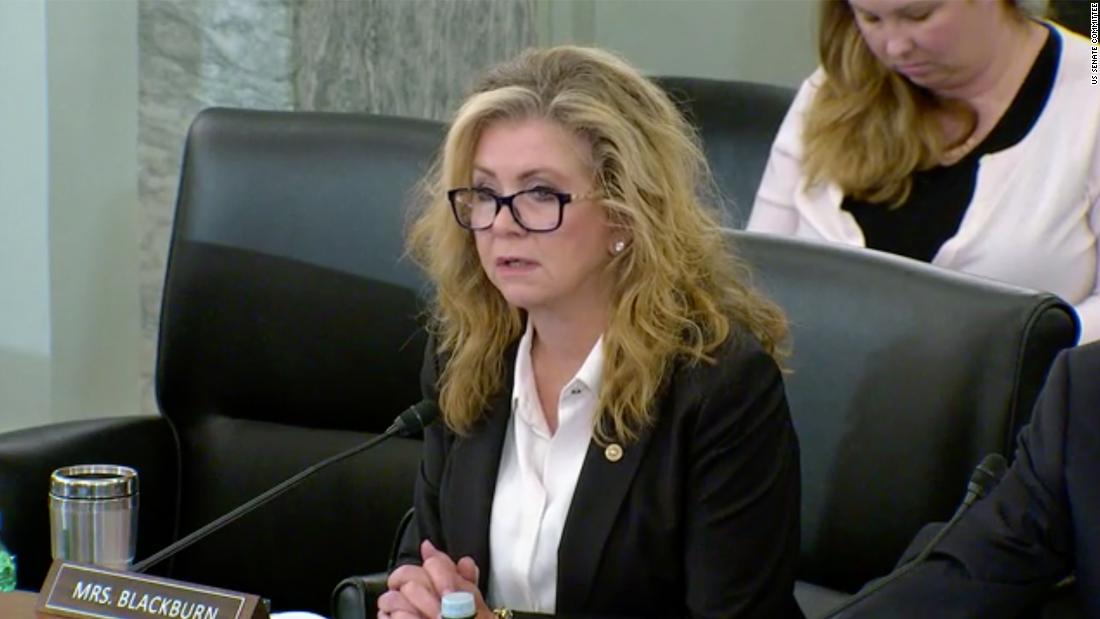 Sen. Marsha Blackburn, a Republican from Tennessee, brought up a tweet that was posted by Andy Stone, Facebook communications executive, during the hearing.

In the tweet, he said, "Just pointing out the fact that [Frances Haugen] did not work on child safety or Instagram or research these issues and has no direct knowledge of the topic from her work at Facebook."

Blackburn responded: "So I will simply say this to Mr. Stone, if Facebook wants to discuss their targeting of children, if they want to discuss their practices, privacy violations, or violations of the Children's Online Privacy Protection Act, I am extending to you an invitation to step forward, be sworn in, and testify before this committee."

"We would be pleased to hear from you and welcome your testimony," she added.

More background: Haugen has been transparent about the fact that she did not work on child safety issues at Facebook; she noted in one answer that although she has some knowledge of the issue, she did not work directly on it.

However, Haugen provided extensive internal documentation related to Facebook's research on the topic to lawmakers.