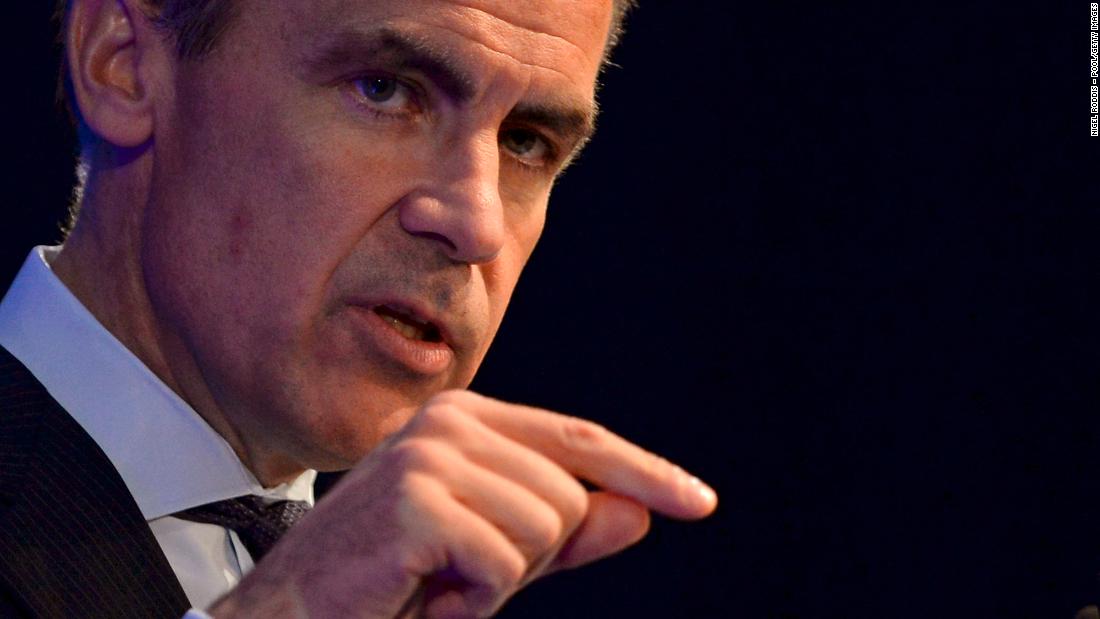 Should the United Kingdom hold a second referendum on whether to exit the European Union? The Davos crowd certainly wants another vote.

After Prime Minister Theresa May's Brexit plan suffered a record defeat in the UK parliament, some lawmakers are pushing for a second public vote to break the deadlock. But the risk of a damaging 'no-deal' exit is also rising as the clocks ticks down to Brexit day on March 29.

Bank of England Governor Mark Carney said during the panel discussion that the central bank isn't predicting a disorderly Brexit, but it is preparing for one. He said it's difficult for companies to be fully prepared, however.

“There are a series of logistical issues that need to be solved, and it’s quite transparent that in many cases they’re not," Carney warned.

Airbus warned today that its UK factories may not survive a chaotic Brexit. 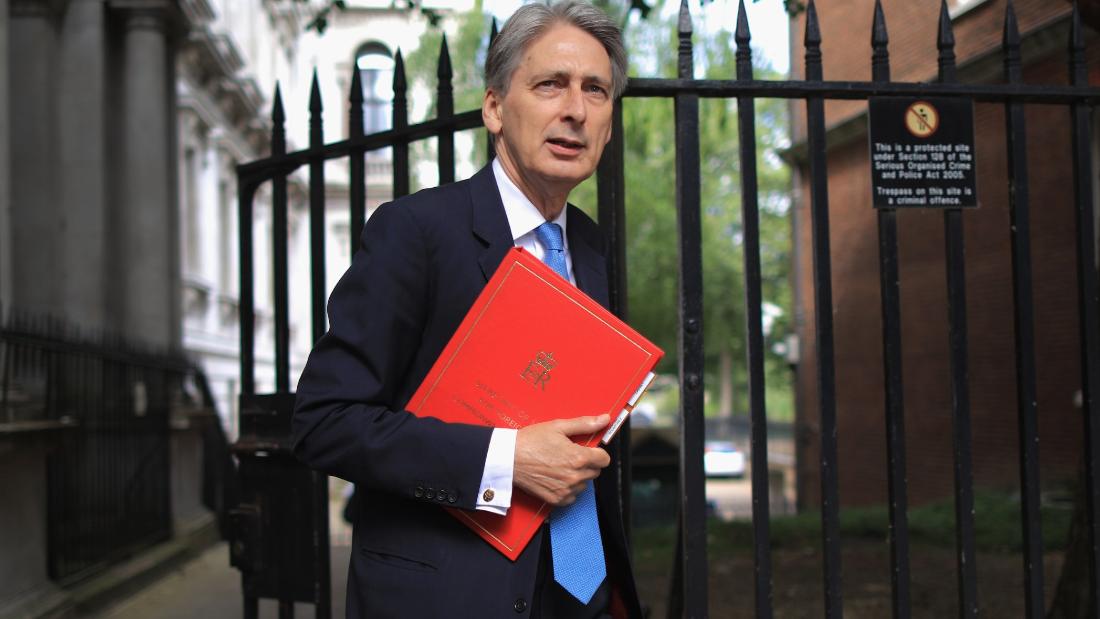 UK Treasury chief Philip Hammond was billed to appear on a panel discussion with EU leaders at the World Economic Forum on Thursday but he didn't show up.

But when the session got underway, Hammond was not on stage. The moderator, World Economic Forum Chairman Klaus Schwab, did not acknowledge his absence.

The UK Treasury said in a statement that Hammond has a packed schedule.

“After stepping in for the Prime Minister at Davos, the Chancellor has committed to more than 20 meetings in 48 hours with a wide range of stakeholders. He has accommodated as many speaking requests as possible in the short time available."

WEF did not immediately respond to a request for comment.

Hammond is scheduled to deliver remarks at a lunch hosted by the Confederation of British Industry in Davos on Thursday. 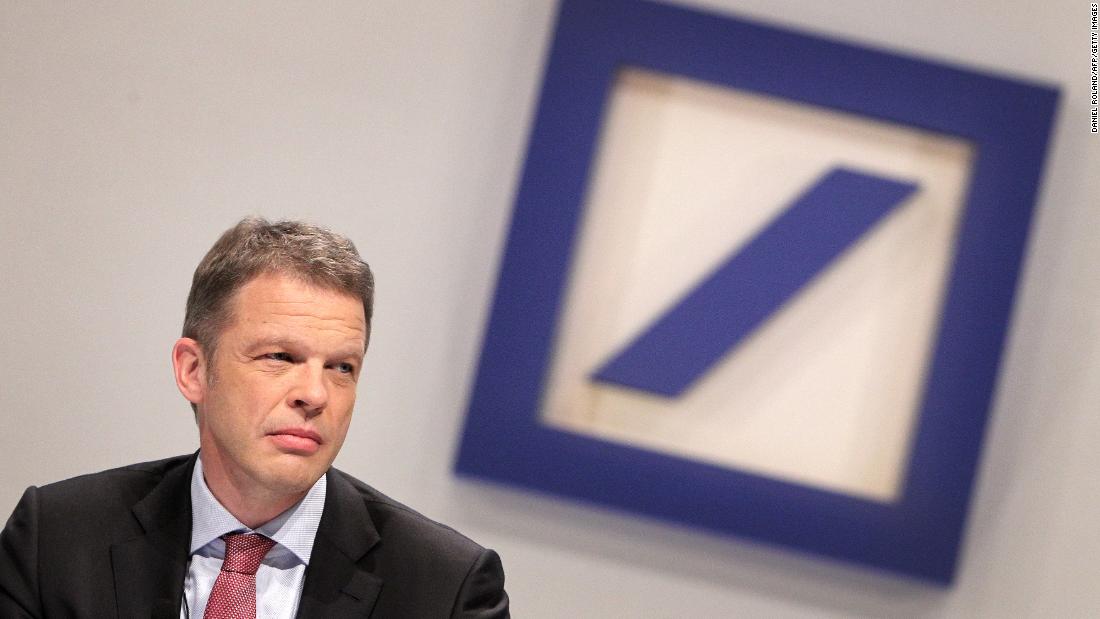 The trade war between the United States and China is hurting businesses across sectors, according to Christian Sewing, the chief executive of Deutsche Bank.

“It’s impacting business significantly … we notice it,” Sewing said at a panel discussion on Thursday.

“Eighty percent of the revenues of the Dax 30 companies is generated outside Germany, they depend on global trade,” he explained.

Sewing said that the bank has seen “certain declines” in the performance of German companies in the second half of 2018.

“A lot of business leaders are now re-evaluating their investments going forward … they delay investments, they stop investments,” he said. 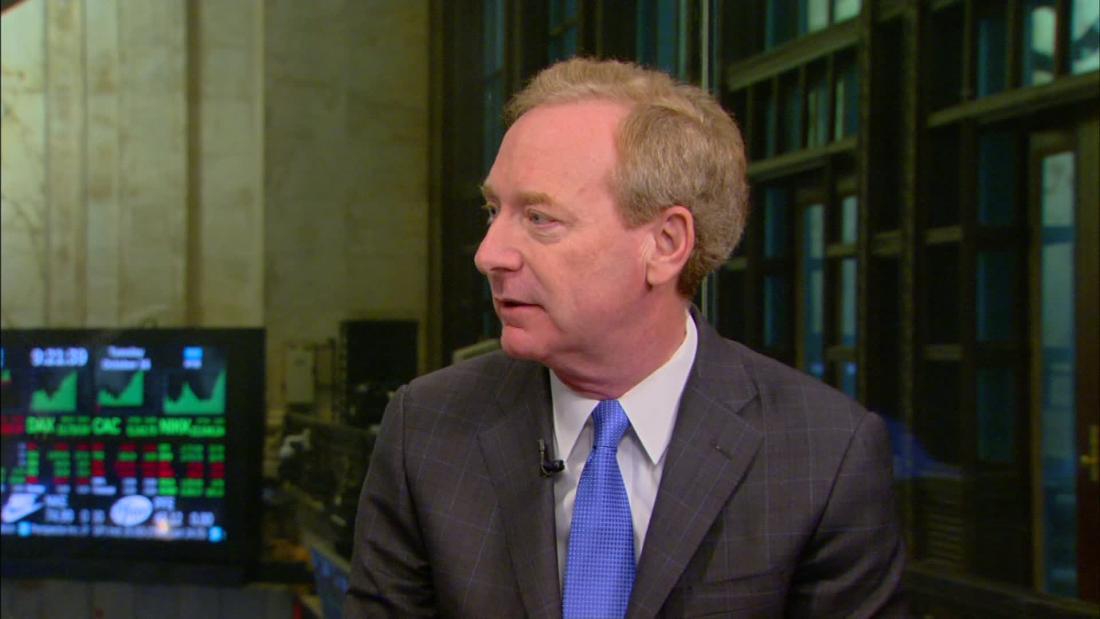 A top Microsoft executive in Davos says the company is aware that its search engine has been blocked in China.

"We’re not yet certain whether it's confined to Bing or if it's something that is broader," Microsoft (MSFT) president Brad Smith said in Davos.

Bing is the last major foreign search engine operating in China after Google (GOOGL) pulled out in 2010.

"It’s not the first time that we’ve encountered issues like this for Bing in China, these do arise periodically," Smith said in response to a question from CNN Business.

It wasn't immediately clear why Bing was blocked. China's internet regulator didn't respond to a request for comment.

The Cyberspace Administration of China announced Wednesday that it had closed 733 websites and shut down 9,382 apps in a crackdown on "harmful" information.

"We’re not aware of any ongoing negotiation or disagreement so we’re working to understand it better," said Smith. 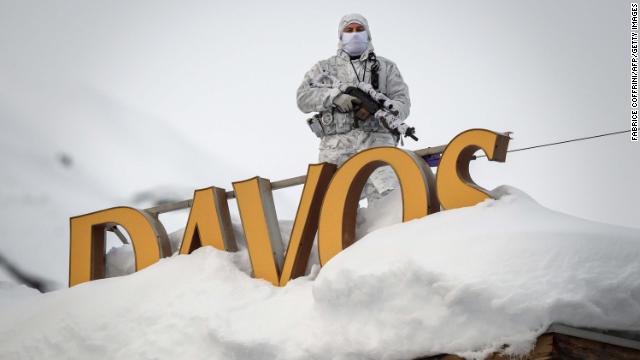 Davos is entering the final stretch.

The World Economic Forum has another action-packed day today, and the stage is set for a takeover by central bankers.

Bank of England boss Mark Carney is scheduled to appear on two panels. He'll be joined in a discussion on "Resetting Financial Governance" by Bank of Japan Governor Haruhiko Kuroda. 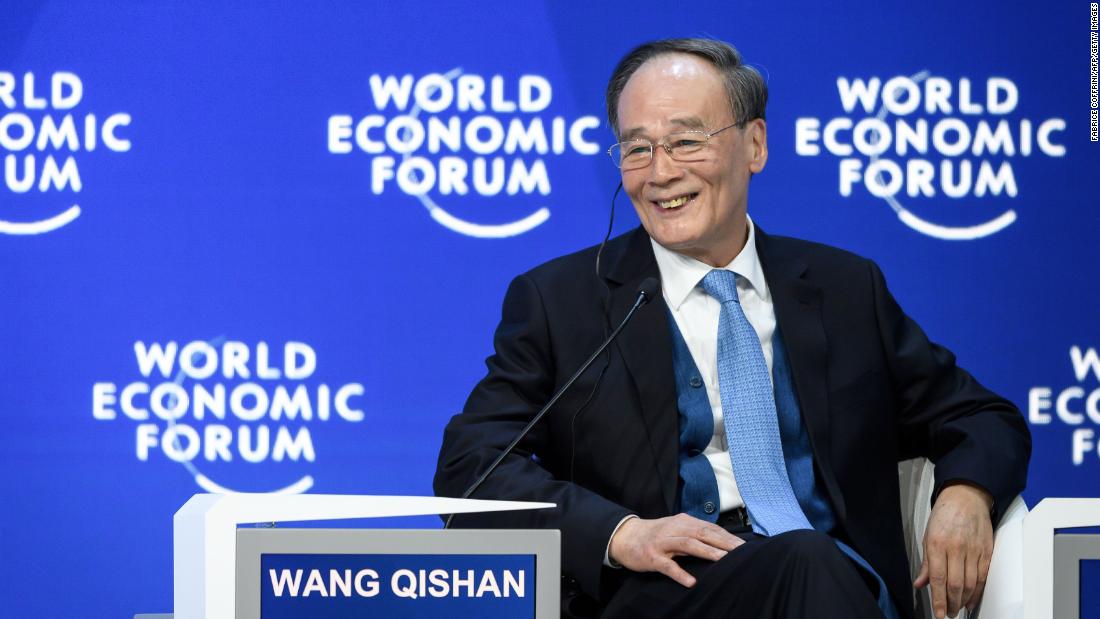 "There will be a lot of uncertainties in 2019, but something that is certain is that China's growth will continue and will be sustainable," he said Wednesday.

Wang said that the Communist Party is "trying to remind people that speed does matter, but what really matters for the time-being is the quality and efficiency" of development.

China's government has been working to rein in high levels of debt and put the vast economy on more stable footing. But those moves have led to a slowdown. Momentum has also been blunted by the trade war with the United States, which has led to tariffs on hundreds of billions of dollars in Chinese exports. 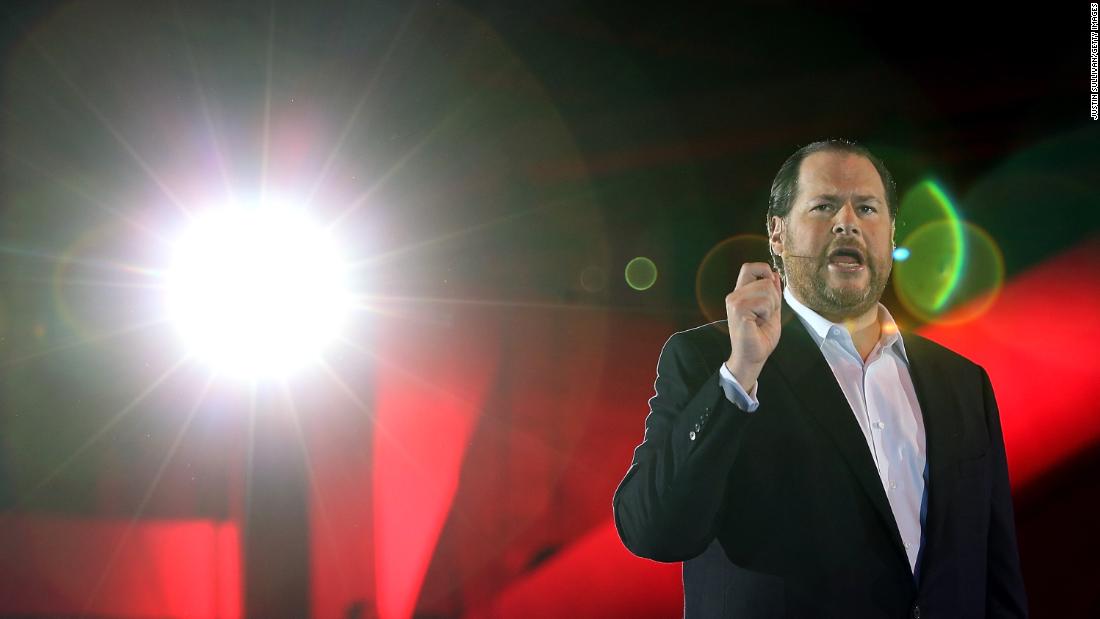 “Plastic has become the nuclear waste of our generation,” said Marc Benioff, the Salesforce CEO and environmental activist.

Climate and the environment are big topics at the conference. Experts have pointed to how much damage plastics can cause, including the concern that there will be more plastic than fish in the oceans by 2050 if nothing is done. They've also observed that every single piece of plastic ever produced still exists, unless it has been burned.

But there is still hope.

The European Union plans to ban 10 single-use plastic products starting 2021, and force its member states to recycle 90% of plastic bottles by 2025.

Major cities and countries around the world, including Taiwan, Seattle, and Vancouver, have banned plastic straws. India is cracking down on single-use plastic. And the United Kingdom proposed a ban on plastic straws, drink stirrers and cotton swabs.

“I don’t think I have seen a single issue like plastics, where companies, business leaders, governments are coming together to really try to solve it,” said Nina Jensen, marine biologist and the CEO of REV, the the Research Expedition Vessel project. 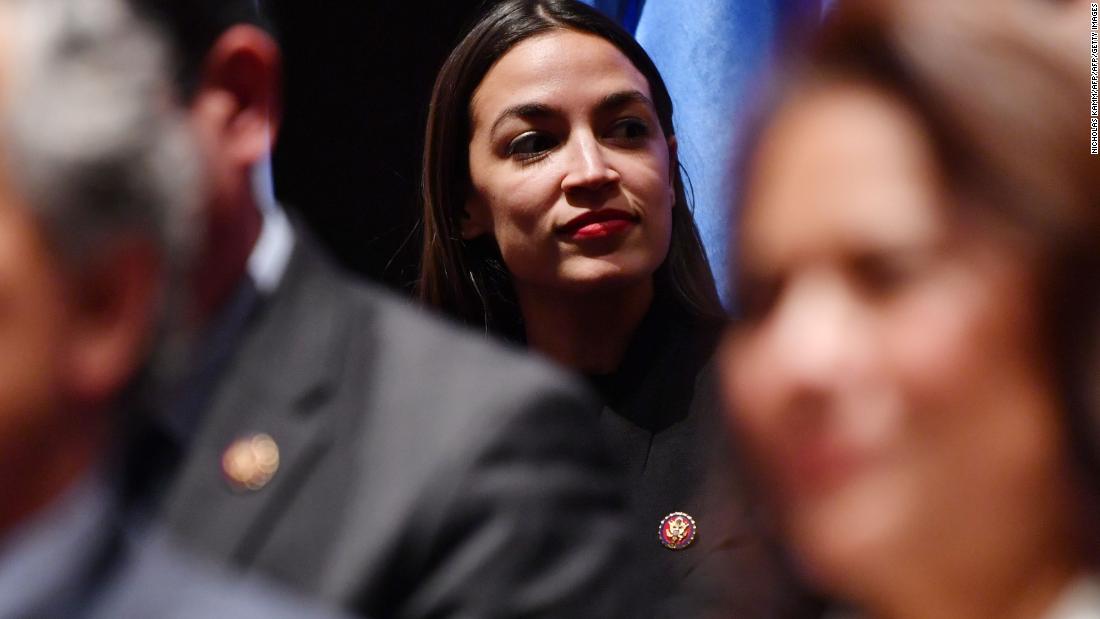 A tax on the rich proposed by newly elected US Congresswoman Alexandria Ocasio-Cortez is being viewed with caution by many at the World Economic Forum.

Ocasio-Cortez, a New York Democrat, suggested earlier this month that a 70% tax on income over $10 million could fund a climate change plan she's pushing called the "Green New Deal.”

But in the Swiss ski resort of Davos, where thousands of the world’s top business, political and academic leaders meet each year, there was skepticism.

During a panel, Michael Dell, the billionaire founder of Dell computers, was asked whether he supports Ocasio-Cortez’s plan. Before he could respond, many in the room burst out laughing, seemingly at the fact that Dell had to answer the question.

Dell said he trusts his private foundation more than the US government to spend money wisely.

“So no, I’m not supportive of [Ocasio-Cortez’s plan]. And I do not think it will help the growth of the US economy,” Dell said.

But Erik Brynjolfsson, director of the Massachusetts Institute of Technology initiative on digital economy, didn’t immediately discount the idea.

"I don’t have a strong opinion on that proposal, the devil is in the details,” he said. “There’s actually a lot of economics that it's not necessarily going to hurt growth and I think we have to examine it more closely."

Much of the discussion about the slowdown in China's economy has focused on the growing trade dispute between China and the United States. But not enough attention has been paid to deliberate decision by the Chinese government to cut back on its debt, according to Jin Keyu, an economics professor at the London School of Economics.

Speaking at a panel entitled The Debt Time Bomb, Jin said that the Chinese government has been taking deliberate steps to reign in debt for the last two years.

"Only two years ago financial markets were saying that China is the next ticking financial bomb. Financial fragility was the issue in China because of debt," she said. "We are seeing the consequences of a deleveraging cycle to make China safer, although slower."

China announced this week that its economy grew only 6.6% in 2018, its slowest annual pace of growth since 1990.