The White House press secretary Sarah Sanders claims CNN is “grandstanding” by suing. In a response to the suit on Tuesday morning, the administration said it will “vigorously defend” itself.

This is her statement:

“We have been advised that CNN has filed a complaint challenging the suspension of Jim Acosta’s hard pass. This is just more grandstanding from CNN, and we will vigorously defend against this lawsuit.
CNN, who has nearly 50 additional hard pass holders, and Mr. Acosta is no more or less special than any other media outlet or reporter with respect to the First Amendment. After Mr. Acosta asked the President two questions—each of which the President answered—he physically refused to surrender a White House microphone to an intern, so that other reporters might ask their questions. This was not the first time this reporter has inappropriately refused to yield to other reporters.
The White House cannot run an orderly and fair press conference when a reporter acts this way, which is neither appropriate nor professional. The First Amendment is not served when a single reporter, of more than 150 present, attempts to monopolize the floor. If there is no check on this type of behavior it impedes the ability of the President, the White House staff, and members of the media to conduct business.”

WHCA President Oliver Knox said the association "strongly supports CNN's goal of seeing their correspondent regain a US Secret Service security credential that the White House should not haven taken away in the first place."

This is not the first time the WHCA has supported CNN in recent days. After Jim Acosta's pass was yanked last week, the group called the move "out of line" and "unacceptable." "We urge the White House to immediately reverse this weak and misguided action," the association added.

"The First Amendment grants the right of all journalists to hold those in power accountable and ask tough questions. It's what Jim, and all of his colleagues who cover the White House and the administration, do with integrity and professionalism.  As we have said before, we will always stand up for our rights. That is why we have filed suit," Zucker wrote.

This morning, CNN filed a lawsuit against the Trump Administration in DC District Court. The White House has violated CNN and Jim Acosta's First Amendment rights of freedom of the press and Fifth Amendment rights to due process. We are demanding the immediate return of Jim’s White House credential.

As you know, Jim's credential was revoked last Wednesday, and he was denied entrance to the White House grounds by the Secret Service when he arrived for a scheduled live shot.

The White House’s action came in the wake of Jim’s questioning of the President at his post-Election Day press conference. Their assertion that it was because of Jim's interaction with a press aide was patently false, and Press Secretary Sarah Sanders released a video that was distorted to give an inaccurate impression of what happened.

This is not a step we have taken lightly. But the White House action is unprecedented.

The First Amendment grants the right of all journalists to hold those in power accountable and ask tough questions. It's what Jim, and all of his colleagues who cover the White House and the administration, do with integrity and professionalism.  As we have said before, we will always stand up for our rights. That is why we have filed suit.

I will keep you posted as the case continues. Below is the statement we released in conjunction with filing the suit, as well as a quote from one of our lead attorneys for the case, Ted Olson, who was the Solicitor General of the United States under President George W. Bush.

Reporters from many news organizations have expressed support for CNN's Jim Acosta after the White House revoked his press pass.

President Trump insulted three reporters affiliated with CNN on Friday, and said the White House may continue to take press passes away from members of the media.

Trump's unprecedented threat poses a serious challenge to the White House press corps and the association that represents them.

At a Q&A session on Friday morning, when a reporter asked Trump, "How long are you going to leave Jim Acosta in the penalty box?," he said "I haven't made that decision, but it could be others also." 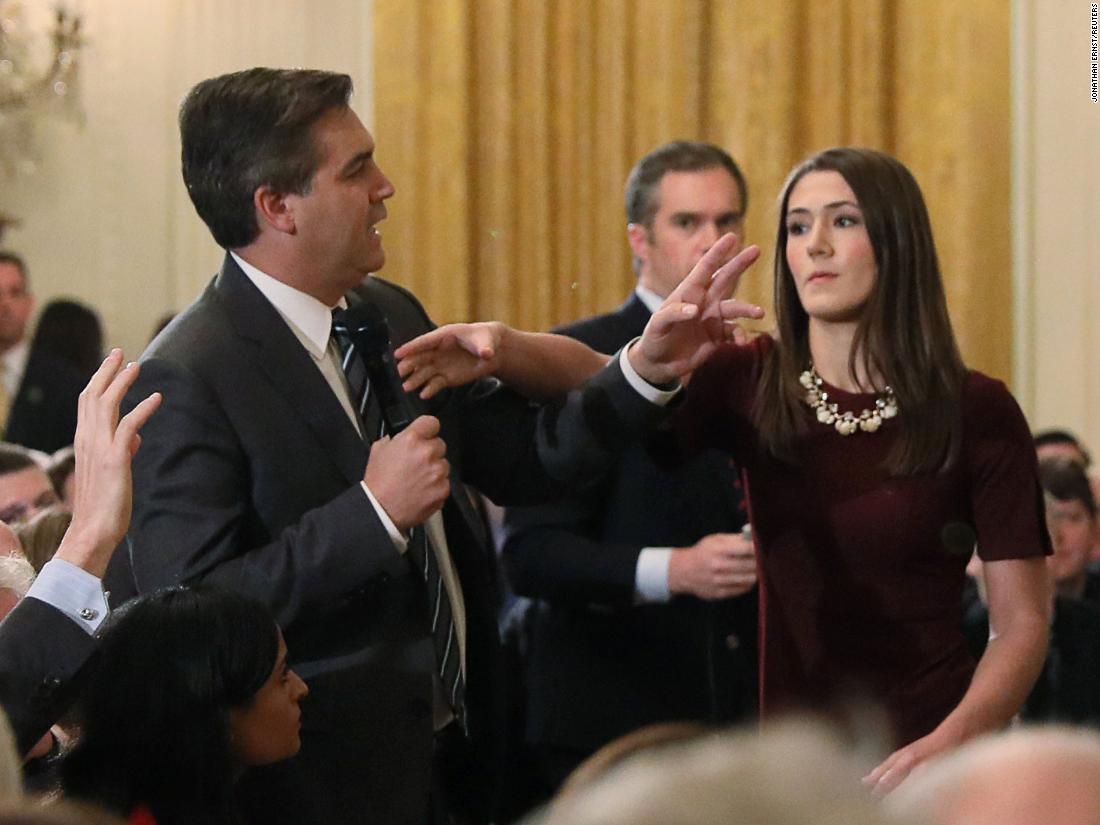 In the statement, Sanders falsely accused Acosta of "placing his hands" on a White House intern as she attempted to aggressively remove the microphone from his hands during a contentious press conference exchange with President Donald Trump.

Later that night, Sanders said in a tweet that the White House stood by its decision to revoke Acosta's credentials, writing, "We will not tolerate the inappropriate behavior clearly documented in this video."

But the video she was referring to, which was included in her tweet, didn't come directly from one of the many cameras that had been at the press conference.

Instead, it appeared to have come from Paul Joseph Watson, an editor-at-large for InfoWars, a media organization known for peddling conspiracy theories and hateful content. Such behavior resulted in InfoWars being banned earlier this year by most major social media platforms.

Moreover, it did not accurately portray what happened — it appears to show Acosta's arm moving in a downward motion towards the intern's faster than it actually did.

CNN is filing a lawsuit against President Trump and several of his aides, seeking the immediate restoration of chief White House correspondent Jim Acosta's access to the White House.

There are six defendants:

The six defendants are all named because of their roles in enforcing and announcing Acosta's suspension.

Both CNN and Acosta are plaintiffs in the lawsuit.

Correction: The original version of this post listed the former director of the Secret Service as a defendant; the actual defendant is the current director.

CNN filed a lawsuit against the Trump Administration this morning in DC District Court. It demands the return of the White House credentials of CNN’s Chief White House correspondent, Jim Acosta.

We have asked this court for an immediate restraining order requiring the pass be returned to Jim, and will seek permanent relief as part of this process. While the suit is specific to CNN and Acosta, this could have happened to anyone.

If left unchallenged, the actions of the White House would create a dangerous chilling effect for any journalist who covers our elected officials.

The full complaint is available here.

CNN is filing a lawsuit against President Trump and several of his aides, seeking the immediate restoration of chief White House correspondent Jim Acosta's access to the White House.

The lawsuit is a response to the White House's suspension of Acosta's press pass, known as a Secret Service "hard pass," last week. The suit alleges that Acosta's First and Fifth amendment rights are being violated by the ban.

Last Wednesday, shortly after Acosta was denied entry to the White House grounds, White House press secretary Sarah Sanders defended the unprecedented step by claiming that he had behaved inappropriately at a presidential news conference, and tweeted a misleading video from an InfoWars personality to justify it.

CNN and numerous journalism advocacy groups rejected her assertion and said his pass should be reinstated.

You can watch how the Wednesday news conference unfolded in the clip below: