Our live coverage of the Sri Lanka Easter Sunday bombings and developing investigation has moved here.

The US says it did not provide Sri Lanka with advance intelligence regarding imminent attacks prior to Easter Sunday, the US Ambassador to Sri Lanka Alaina Teplitz told CNN’s Christiane Amanpour Tuesday.

When presented with this claim, Ambassador Teplitz denied it.

“We had no prior knowledge of these attacks,” the ambassador said, adding, “the Sri Lankan government has admitted lapses in their intelligence gathering and information sharing.”

When Amanpour asked her about de Silva’s claim, Teplitz responded:

“Well I can’t speak for others. I don’t know what other sources of information the government of Sri Lanka might have had. I can just tell you that we had no prior knowledge.” 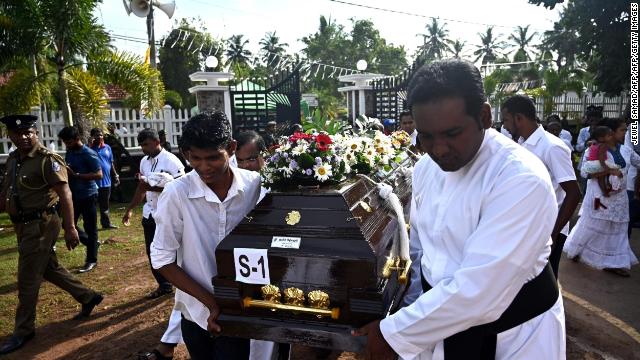 Sri Lanka woke up Tuesday to a day of mourning following the deadly hotel and church attacks on Easter Sunday.

It's now almost 9 p.m. in the country. Here's what we know about the attacks, the suspects and the investigation:

The deadly attacks that rocked Sri Lanka on Easter Sunday could have been prevented if there hadn’t been a breach in communications, Prime Minister Ranil Wickremesinghe said at a news conference in Colombo on Tuesday.

“We, if it was known, certainly could have prevented many of the attacks in the churches and have more security in the hotels,” Wickremesinghe said.

“I am in touch with the relevant officials,” he said, adding that the Sri Lanka's president has also launched an inquiry “as to why the information did not reach my office.”

Wickremesinghe said investigators are making “good progress” in regards to identifying the suspects “but they need to identify all the culprits and look at what their network is.”

He said the attackers had foreign links and some have traveled abroad. “This could not have been done just locally,” he said, adding that the attackers have been training “in coordination which we have not seen earlier.”

Asked if there are currently active threats in the country, the prime minister told reporters that there are "still people on the run with explosives."

He said he doesn’t know how many people are on the run.

The Sri Lankan government's failure to act on intelligence it received about potential terrorist attacks ahead of the Easter Sunday bombings was “criminally negligent,” a former senior police official told CNN on Tuesday.

Asked about intelligence received from foreign security agencies in advance of Sunday's attacks, the official said that such specific warnings are “very rare,” and to not act upon the warnings received was “criminally negligent.”

“This was not an oversight, it was absolutely an irresponsible act which should be dealt with under the criminal law of the country,” he said. “This is a crime which has been done by omission.”

Some background: On Monday, Harsha de Silva, cabinet minister, told CNN that US and Indian intelligence warned Sri Lankan officials before the attacks. Speaking at a news conference in Colombo, a government spokesman apologized for the failure to act on that intelligence.

The former senior police official also said the security services had been aware of the group linked to the attacks, National Tawheed Jamath (NTJ), for at least two years.

He said the group emerged in the eastern province of Sri Lanka, and was linked to the vandalizing of Buddhist statues. He said there were indications that the group was growing in size and extremism, and estimated that there are about 100 to 150 members currently in the country.

Sri Lankan Prime Minister Ranil Wickremesinghe said at a news conference Tuesday that a fourth hotel was a target in the attacks on Sunday, but the attack failed.

Wickremesinghe did not address how the attack was foiled or name the hotel, citing the possibility of hurting the “prospects of people coming there.”

The attack is still under investigation and precautions are being taken, Wickremesinghe said.

Wickremesinghe added that many of the suicide bombers have been identified but not all. He said they are still looking our for more possible suspects. So far, only Sri Lankans have been arrested so far.

Two members of the Sri Lankan national cricket team visited St. Sebastian church in Negombo on Tuesday to pay their respects to those killed in the Easter Sunday attacks.

Fast bowlers Dushmantha Chameera, 27, and Dhammika Prasad, 35, don’t live near the church but told CNN they made a special visit, adding that they were shocked by the attacks.

ISIS has claimed responsibility for the Easter Sunday attacks in Sri Lanka, according to a statement put out by the terrorist group's news agency Amaq.

"The attackers who targeted citizens of the (anti-ISIS) coalition state members and Christians in Sri Lanka the day before yesterday were fighters of the Islamic State," the claim stated.

The statement offered no evidence to support the claim, and there is no direct evidence yet that the terror group was involved. Some of their claims have been false in the past.