Campbell confirmed the email was sent minutes before the attack to a “generic” email account that was maintained by staff, and was not seen by the Prime Minister.

When Ahmed Khan moved to New Zealand as a refugee from Afghanistan 12 years ago, he thought he had left violence and death behind.

But on Friday, as he was praying at Linwood mosque in Christchurch, Khan saw an armed man starting to shoot indiscriminately at worshipers. Khan said he pulled one injured child out of danger and was holding a man who'd been shot in the arm when the gunman returned.

"(The wounded man) was asking for some water. I said to him, 'calm down, the police are here now' and stuff. And the gunman came through the window again while I was holding him and shot him in the head. And he was dead," Khan told CNN.

His is one many heartbreaking stories shared by survivors of Friday's tragedy, which took place in a city they had trusted was safe.

"We felt it was such a safe city, such a safe country," a 30-year-old construction project manager, who did not want to be named, told CNN. "The hatred has spread everywhere." 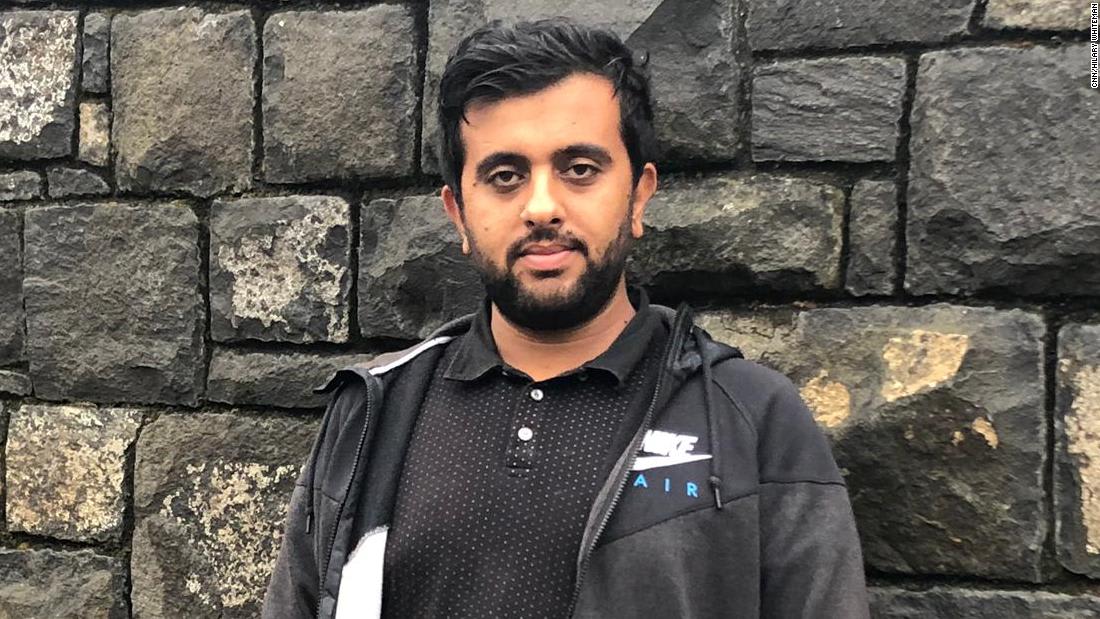 He fled Afghanistan, only to see death in Christchurch

For many longtime Christchurch residents, heartbreaking tragedy is becoming an all-to-familiar experience.

David Lynch, 58, was "born and bred" in the city which has less than 400,000 residents. He attended the memorial site with his daughter on Saturday to pay his respects - eight years after witnessing an earthquake in the town that destroyed buildings and left 185 people dead.

"Eight years ago, with the tragedy of the earthquake, I remember seeing media from the US on a corner not far from here with a fallen building. Seeing the media today takes me right back," he told CNN. "But there’s a bit of a difference. Then, it was a natural disaster. This is a massive loss of life through someone’s believe that Muslims should die."

"When you look at where we are geographically, these types of people, their thinking is always to try to get as much attention (as possible)," he added. "To come to such a unique place that is considered so safe and away from so much of the rest of the world where these things happen on a regular basis. I guess that much have been part of the appeal.”

Lynch has a message for Christchurch's Muslim community. "I think it’s a time for supporting and standing with them, and make them realize that what's happened here is not what New Zealand is all about," he said.

Read more about the two tragedies that have struck Christchurch here.

Sydney's iconic opera house is lit up in New Zealand colors tonight in response to the attack. A silver fern, the national symbol is projected in the middle of the building.

In Melbourne, Australia's second city, hundreds have also been paying their respects.

Other cities around the world have been marking the tragedy, with the Eiffel Tower in Paris going dark on Friday evening.

And the spire of New York's One World Trade Center was lit in blue and red, the colors of New Zealand's flag.

Meanwhile, vigils have been held at mosques and community centers worldwide - many of which were surrounded by an increased security presence to prevent a follow-up attack.

Social media platforms including Facebook, YouTube and Twitter have been scrambling to remove a 17-minute video of the attack, apparently live-streamed online by the shooter. CNN has not verified the video, and has not shown it on its platforms.

The sites have all said they are removing the video as soon as they become aware that it has been posted.

But the task of the tech companies is made more difficult by the fact that the video was partially shown by many news organizations around the world. That confuses the companies' algorithms, which are trained to believe that videos are more trustworthy if they are broadcast by news outlets.

And once a video is shared online, it's difficult to remove any copies and stills which people subsequently post. "That video that will be up there forever now," Brett Lee, founder of the organization Internet Safe Education, told CNN.

"Facebook can close accounts, they can take things down, but there will be multiple copies of that [the video] - and potentially, that can be shared millions of times," he said. "The damage is already done."

Lee called the internet a "powerful and effective" tool for extremists and terrorists. "We have created a bit of a beast that is there for the use of people who do want to spread messages of hate," he added.

Read more about how the attack was designed to exploit social media here.

Brenton Tarrant, the suspect behind Friday’s mass shooting at two Christchurch mosques that left 49 people dead, had traveled to Turkey multiple times and spent "an extended period of time" there, a senior Turkish official told CNN on Saturday.

Turkey is "currently investigating the suspect’s movements and contacts within the country," the official told CNN adding he believes Tarrant may have also traveled to additional countries in Europe, Asia and Africa.

In a chapter of Tarrant’s hate-filled manifesto he called for the assassination of Turkish President Recep Tayyip Erdogan, declaring “he must bleed his last.” State broadcaster TRT, citing Turkish authorities, said officials are investigating whether Tarrant was in the country "to carry out a terror attack and/ or an assassination."

Erdogan condemned Friday's attack in a post on Twitter, calling it "the latest example of rising racism and Islamophobia."

Far-right writer and speaker Milo Yiannopoulos has been banned from entering Australia after he condemned Islam in the aftermath of the Christchurch mosque attacks, immigration minister David Coleman said.

Writing on social media after the shootings, in which 49 people were killed, Yiannopoulos described Islam as a "barbaric, alien religious culture."

Yiannopoulos was supposed to tour Australia this year but Coleman said the British writer's response was "appalling and fomented hatred and division."

"The terrorist attack in Christchurch was carried out on Muslims peacefully practicing their religion. It was an act of pure evil. Australia stands with New Zealand and with Muslim communities the world over in condemning this inhuman act," Coleman said in a statement Saturday.

The number of Jordan citizens killed in the Christchurch mosque attacks has risen to three, the country's foreign ministry announced on Saturday.

Another five were injured, including a five-year-old girl in critical condition.

Speaking to Jordan's al-Mamlaka TV, the girl's uncle Sabri al-Daraghmeh said she was shot in the face, abdomen and leg.

Families have told CNN they are still waiting for news about missing loved ones more than a day after the terrorist attacks on two mosques in Christchurch.