Among its key players, Modi’s BJP-led NDA can rely on the All India Anna Dravida Munnetra Kazhgam (AIADMK) in southern Tamil Nadu state, which currently holds 36 out of 39 seats, making it the third largest party in the Lok Sabha.

In northern Bihar, home to 40 seats, the BJP has allies in the Janata Dal (United) and Ram Vilas Paswan's Lok Janshakti Party (LJP), bringing a combined number of eight seats.

The Shiv Sena, an ally in western Maharashtra state (48 seats), is the sixth largest party in the Lok Sabha with 18 seats in the coalition.

In northern Punjab with 13 seats, the Shiromani Akali Dal brings in four seats.

The Congress-led UPA coalition governed India for two consecutive terms before it was routed out by Modi’s NDA.

Its key partners include the Nationalist Congress Party in Maharashtra with seven seats, the Rashtriya Janata Dal in Bihar and Jharkhand with 4 seats, the Janata Dal (Secular) in Karnataka with two seats and the Jammu and Kashmir National Conference with a single seat.

Another ally is the Dravida Munnetra Kazhagam (DMK) in Tamil Nadu, which failed to win a single seat against the AIADMK, then led by the late chief minister Jayaraman Jayalalithaa. The DMK is counting on the absence of Jayalalithaa, anti-incumbency and factions within the AIADMK.

As the votes get tallied, once again the 2019 polls have primarily been a contest between Prime Minister Narendra Modi’s ruling Bharatiya Janata Party (BJP) and the main opposition Congress Party, led by Rahul Gandhi, scion of India's most influential political dynasty.

These state players may not be as influential on a national scale but they can be instrumental when it comes to the strength of a coalition, a mainstay of the Indian political landscape.

To form a majority government, a party or coalition needs a minimum of 272 seats out of 543 elected seats.

In the 2014 polls, the BJP secured 282 seats, making it the first party in 30 years to singlehandedly achieve a parliamentary majority.

Alongside its coalition partners, which make up its National Democratic Alliance (NDA), that number reached 336 seats.

On the opposite end of the spectrum, Congress, which headed the United Progressive Alliance (UPA) coalition government in 2014, recorded its worst ever performance, securing just 44 seats compared to 206 in the previous elections.

Allying with regional parties will be vital for both the BJP and Congress in other key states such as northern Uttar Pradesh (80 seats), western Maharashtra (48 seats), West Bengal in the east (42 seats), northeastern Bihar (40 seats) and the southern state of Tamil Nadu (39).

Both the UPA and the NDA have traditional allies.

More on that next...

Since voting began last month, shutdowns of mobile internet have been reported in the Indian states of Rajasthan, West Bengal and Indian-administered Kashmir, according to the Delhi-based Software Freedom Law Center (SFLC), adding to more than 30 recorded already in 2019.

According to the SFLC, on April 18, authorities in the Srinagar and Udhampur districts of Indian-administered Kashmir suspended mobile internet access during polling "as a precautionary measure to maintain law and order."

Law and order was also cited as a reason for cutting off mobile internet a couple of days later in Rajasthan's Sikar district. The majority of Indians access the internet via mobile devices.

This is in keeping with a massive uptick in internet shutdowns — both mobile and full access — in India in recent years. The number has risen from 79 in 2017 to more than 130 last year.

The trend raises major concerns about India's commitment to internet freedom, particularly during an election when people's access to information is even more important than usual.

Read more on that here and how it might impact today's results.

According to Human Rights Watch (HRW), Hindu vigilante groups have killed dozens of people in recent years, many of them Muslims, for allegedly slaughtering or transporting cows -- an animal that is considered sacred by many Hindus.

The attacks have sparked concern about the spread of violent Hindu nationalism since Indian Prime Minister Narendra Modi and his right wing Bharatiya Janata Party (BJP) came to power in 2014.

Critics say the presence of a Hindu nationalist government in Delhi has encouraged vigilantism by their hardline supporters against cattle traders, especially Muslims, a minority in India. Even minority groups within the Hindu community, such as lower caste Hindus previously known as "untouchables," have faced violence from hardline nationalists.

In August, Modi condemned the vigilante attacks and has called on the states to prevent mob violence. "I want to make it clear that mob lynching is a crime, no matter the motive," Modi said. No person can, under any circumstances, take the law into his own hand and commit violence."

However, Modi's words made no difference, for Khan, who was killed in the city of Alwar three weeks before Modi's statement.

Read more about Alwar and his family here. 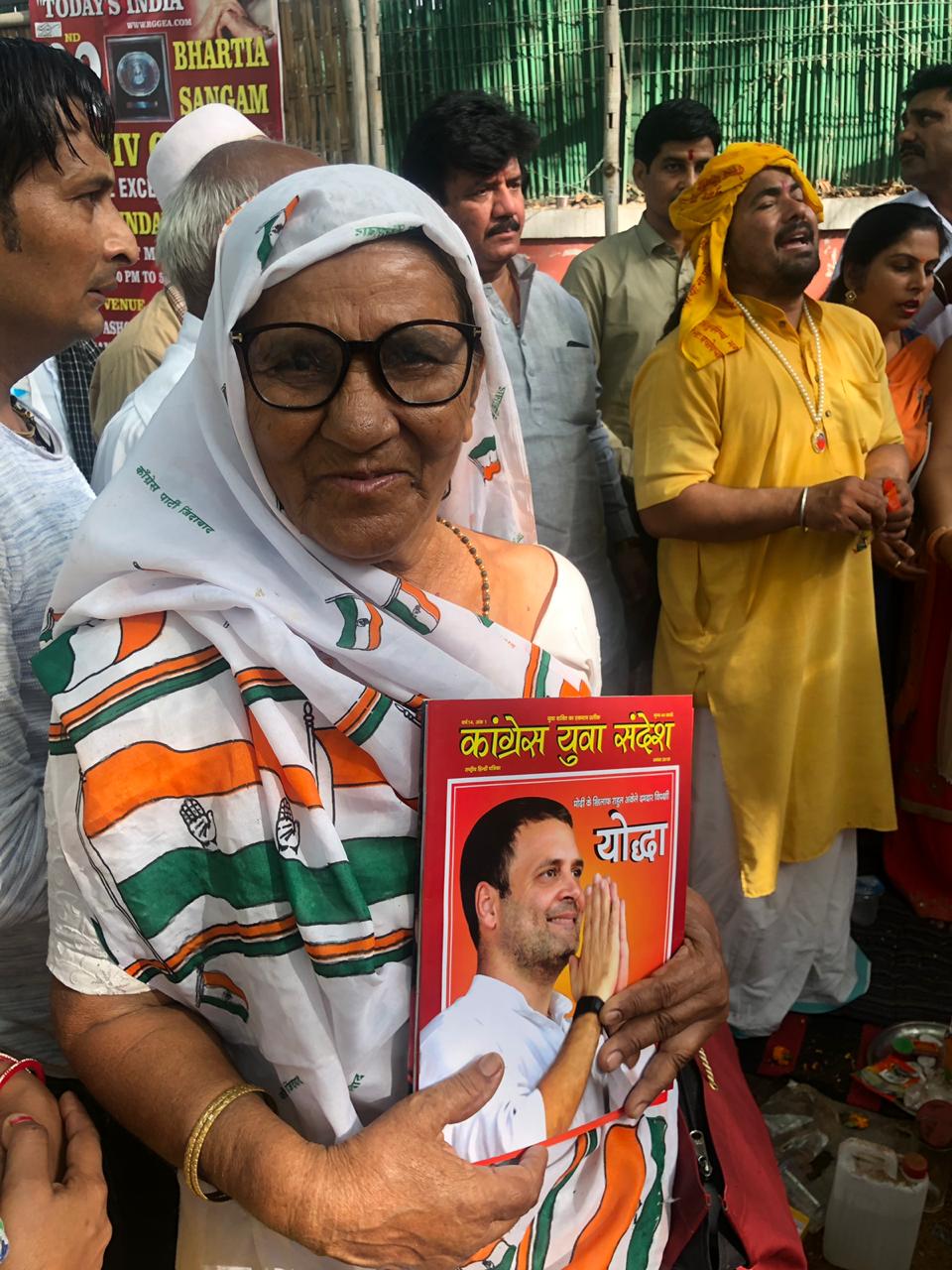 Devi, 70 from Bhardwaj in Gujarat state is outside the Congress Party headquarters in New Delhi draped in a sari with the party’s hand symbol. Her family are longtime Congress Party supporters.

She said they moved to Gujarat from Pakistan and have supported the party since the time of Jawaharlal Nehru, the first Prime Minister of India after independence.

On why she voted Congress: “People don’t have jobs in my village. I want Rahul Gandhi as prime minister. Modi and Amit Shah (BJP President) have done nothing.” 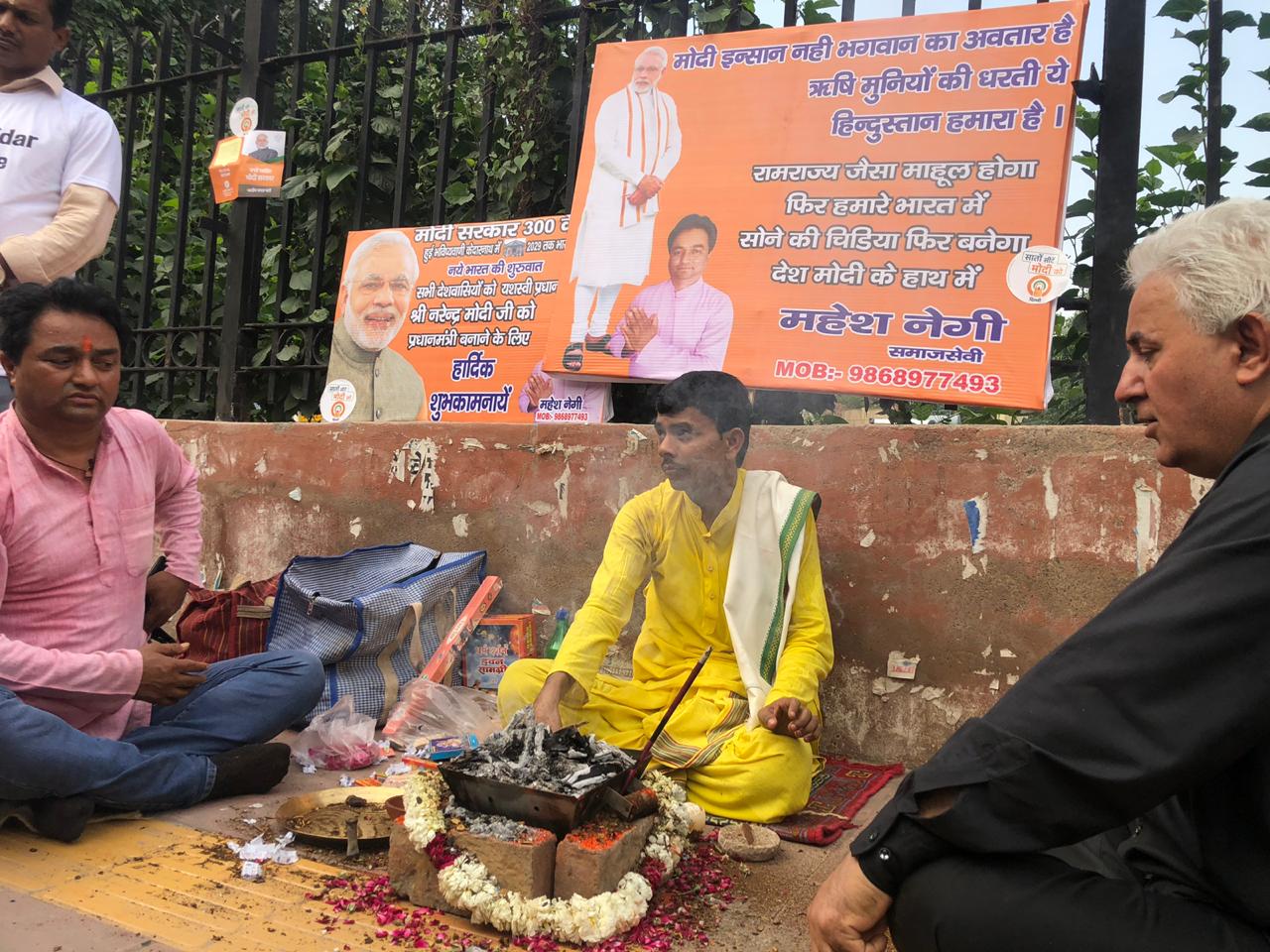 Not to be outdone by the Congress Party, there's a similar scene outside the BJP headquarters in New Delhi. The priest (in yellow) said: “Modi will win for sure but we are holding this religious ceremony to make sure he wins more seats than 2014.”

If BJP wins a majority: Modi's party, along with its allies the National Democratic Alliance (NDA), will win an outright majority if they cross the 272 threshold. They will then be asked to form a government by President Ram Nath Kovind and Modi will continue as the country's Prime Minister for another five years, having been given a mandate on his policies.

Congress Party wins a majority: If Congress wins a majority it would be a major upset and go against every exit poll (though they have been wrong before.) In 2014 the party suffered its worst ever electoral loss, ceding power in New Delhi to Modi, and winning just 44 parliamentary seats to the BJP's 282. It would mean voters want a return to the status quo and a party that has dominated Indian politics since independence in 1947.

Hung Parliament: If no party get enough seats to form a government it would be a hung parliament and negotiations will be underway between parties to form a coalition. More on that coming up... 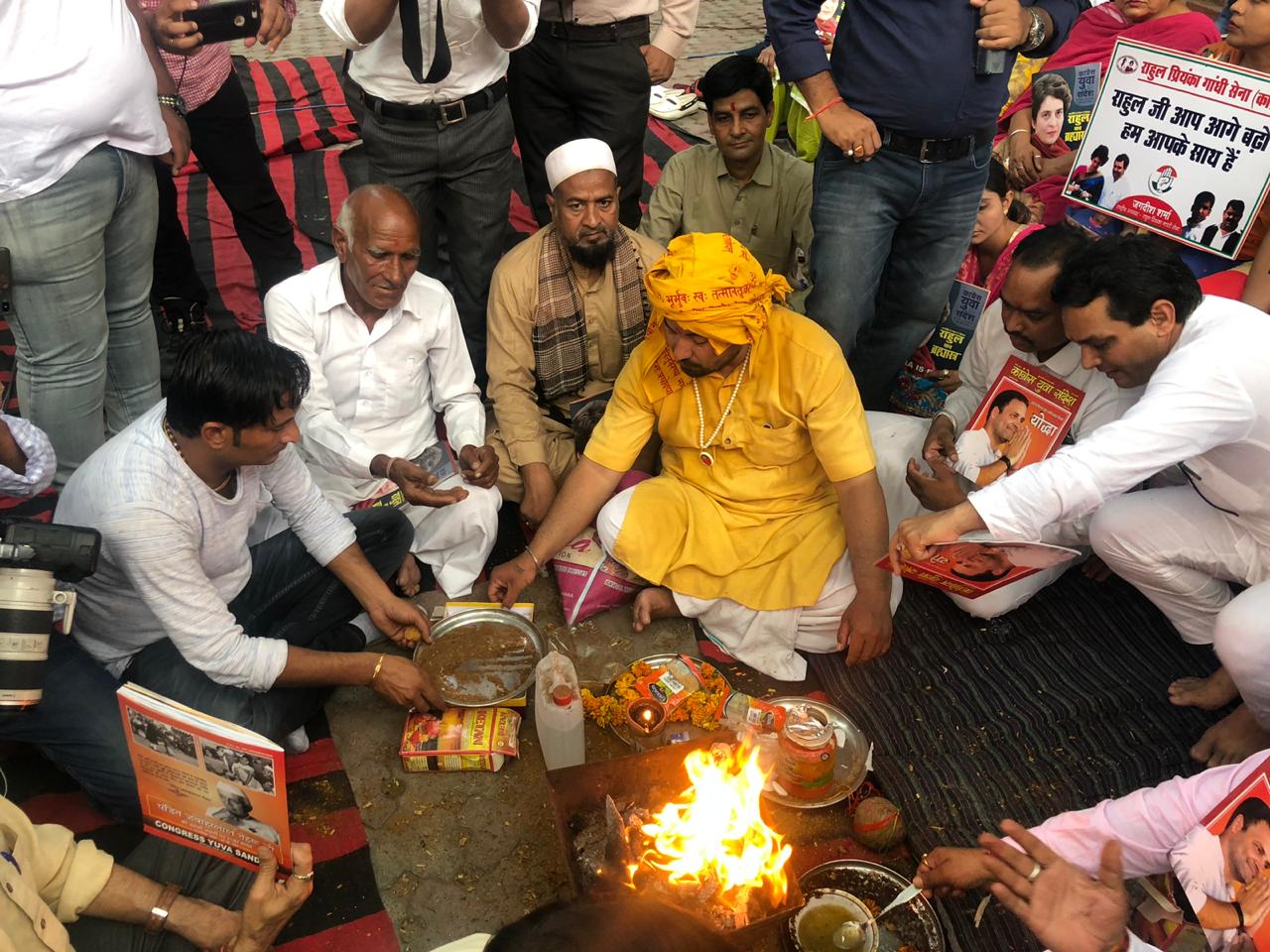 Supporters of the Congress Party hold a Hindu ceremony outside the party’s New Delhi headquarters.

They say they want Rahul Gandhi to be the next Prime Minister as Modi and the BJP are "ruining the country."

One man said “the youth and women are suffering under the BJP government."

Voter turnout during these elections was the highest ever at 67.10%, according to the Election Commission. Have a look at that breakdown state by state.