We have now concluded our live blog for the protests in Yuen Long. Please follow any further updates on our story here.

Clashes between protesters and police in Yuen Long resulted in 23 people being sent to hospitals, the Hong Kong Hospital Authority told CNN.

Twenty of the injured are men and three are women, all are between 15 and 60 years old.

Ten people have already been discharged but two remain in serious condition and ten are in stable condition.

Riot police forced protesters to retreat to the station after trying to clear crowds for more than four hours. Police have now surrounded the building as the final demonstrators slowly begin to leave.

The authorities took strong action against the Saturday protest which was earlier declared illegal, having not been officially authorized by the police.

Both pepper spray and rubber bullets were used to disperse the crowd, which at its height organizers claimed numbered more than 100,000.

But it was a baton charge by riot police into the station as the protest drew to an end which is likely to become the defining image of the demonstration, with protesters comparing it to the events of last weekend when commuters in Yuen Long were attacked by alleged gang members.

If the police decision to storm the Yuen Long subway was an attempt to scare away the last of the protesters, it appears to have failed -- at least for the moment.

The last train for Hong Kong's Central station leaves Yuen Long at 12.26 a.m., in just over an hour.

In the meantime, the last remaining protesters inside the station say they are determined to stay until police leave and they are able to exit freely.

Police, however, have now surrounded the station and don't seem to be going anywhere.

The decision by riot police to storm the subway station has drawn unfavorable comparisons among demonstrators with the events of last weekend, when protesters returning home to Yuen Long were viciously attacked by a mob wielding iron bars and bamboo sticks.

Several protesters were knocked to the ground and injured when police entered Yuen Long station just moments ago. Paramedics are now on the scene and attending to the wounded.

Blood stains can be seen across the station floor. Rather than forcing the protesters to leave many are now vowing to stay on. It is not clear whether police plan to reenter the station.

Chaos briefly reigned inside the station when riot police charged up the stairs with batons, hitting protesters and using pepper spray.

Protesters responded by using fire extinguishers to try and push the police back.

Blood stains were clearly visible on the floor of the subway station after police left.

Police have warned protesters in Yuen Long that if they don't leave, they could be arrested and charged.

"The protestors are participating in an unauthorized assembly under the Public Order Ordinance and may be liable to a maximum penalty of five years' imprisonment," a statement from Hong Kong's police said.

Riot police charged into the Yuen Long subway station where demonstrators had been peacefully gathering, arresting at least one protester and spraying pepper spray into the crowds.

Hong Kong's riot police have entered the Yuen Long subway station, charging at protesters who were attempting to peacefully leave the demonstration.

At least one protester appears to have been arrested, while others are yelling at the police from behind the ticket gates amid scenes of panic and confusion.

Some of those gathered are now throwing things at the riot police, who are firing pepper spray into the crowds. 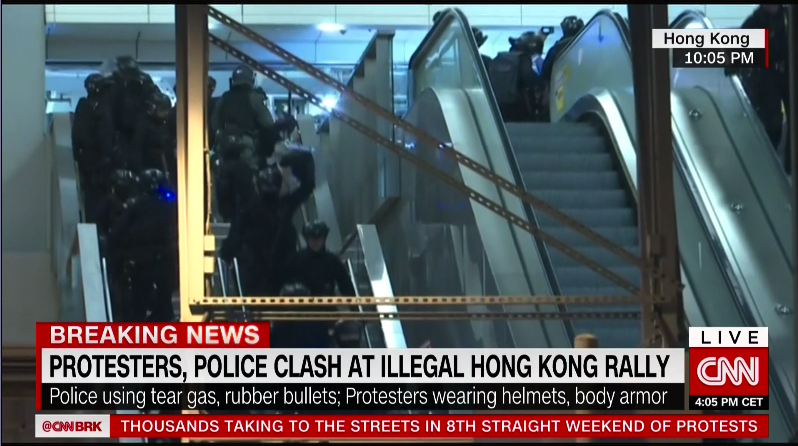