Chief Executive Carrie Lam today commended the bravery of an officer who was shot in the leg with an arrow as police attempted to clear protesters around Polytechnic University.

In the first post on her verified Facebook page since October 20, Lam said she visited the officer on Monday morning and understood that his surgery had been successful.

"(The police officer) wants to resume work as soon as possible, this kind of bravery and responsibility is touching," she said.

She also referred to the ongoing unrest in the city, saying:

"The violence of the mob continues to escalate."

Lam urged protesters to "obey the police," who have appealed for those still inside Polytechnic University to surrender peacefully.

Police also condemned the arrow attack today. "Without a doubt, this is a murderous act," spokesman Kwok Ka-chuen said. "The arrow could have killed our officer or anyone in the surrounding. We express the strongest condemnation against this indiscriminate violence."

Hong Kong Polytechnic University -- also known as PolyU -- has been the scene of a 24-hour siege in some of the most violent and dramatic scenes in almost six months of anti-government demonstrations.

Since last week, protesters had used the campus as a base to launch operations to block nearby roads.

Police attempted to clear the area on Sunday, but were met with fierce resistance. Protesters set huge fires to block police advances and launched a barrage of petrol bombs, bricks and other missiles. One officer was shot in the leg with an arrow, as the force responded with round after round of tear gas, rubber bullets and water cannon. 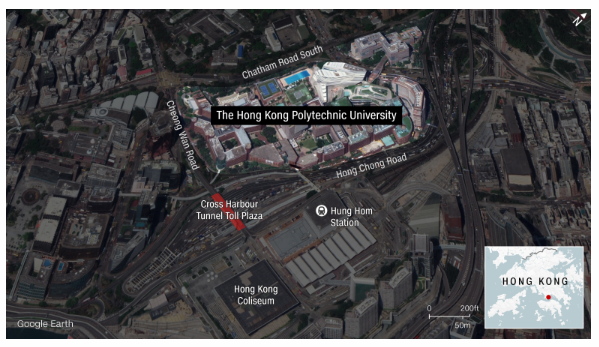 Around 8 a.m. Monday, protesters began leaving the campus, and large numbers could be seen making a break for it. Some were pushed back, however, after police fired tear gas and expanded their cordon. Earlier, protesters had said those attempting to leave were being arrested, and complained that they were being boxed in by the authorities.

There is still a small group of between 100 to 1,000 protesters holed up inside PolyU, despite police orders to leave.

In a press conference Monday, police condemned the "extreme violence" on the campus -- and said they had received a report that toxic and dangerous chemicals had been stolen from the PolyU laboratory.

"A university is supposed to be a breeding ground for young talents but it has unfortunately become a battlefield for criminal and rioters. The PolyU campus in Hung Hom has been turned into a weapon factory where an arsenal of weapons were made and stored," a police spokesman said.

PolyU isn't the first university to be caught up in the ongoing unrest. Last week, protesters focused their attention on the prestigious Chinese University of Hong Kong, a sprawling and isolated campus in the New Territories.

Protesters holed up in the university for four days, fending off police who attempted to enter before bringing the occupation to an abrupt end last Friday.

Hong Kongers were due to go to the polls for local elections on Sunday -- but with chaotic scenes across the city, they could be postponed.

Constitutional Affairs Secretary Patrick Nip said the likelihood of the elections going ahead as scheduled had been “reduced” due to the protests.

The situation over the past weekend has obviously reduced the chance of holding the election as scheduled, and I’m very worried and anxious about this,” Nip said.
"I must say that postponing the election is a difficult decision to make and we would not take this step unless absolutely necessary."

He said that for the election to be held safely, the violence had to stop, road blocks needed to be cleared and the destruction of transport facilities had to end.

The government is now working full steam in preparing for the election but the urgent task is to stop violence," Nip said.

Hong Kong only has a partial democracy -- the public can vote for district council and legislative council representatives, but the vast majority of people don't get to vote for the city's leader, the chief executive.

Protesters say canceling elections could further restrict Hong Kong's democracy, which they fear is already being eroded by the mainland Chinese government.

Learn more about Hong Kong democracy -- and the city's relationship with China -- here.

Normally a popular shopping district packed with tourists, Nathan Road remains a drawcard for some amid the tense stand-off between police and protesters.

Most days, the major arterial hub is bustling with activity. Today, it's been a hotspot for protests. Hundreds of protesters are still out, with police firing tear gas every now and then.

Despite the discomfort, plenty of bystanders are watching from the sidelines.

“I am so sad, look at this,” said one women, who is visiting from Los Angeles and staying nearby.

“The Hong Kong government is the worst, but also should these kids be doing this? They feel they have no other way. It's such a mess."

Hong Kong police have been seen carrying what appear to be assault rifles, with one senior officer saying they are prepared to use them if necessary.

The rifles were seen on Nathan Road, Kowloon -- not around the Hong Kong Polytechnic University campus, which has been a major flashpoint today.

"We are police officers and we control the level of force. If the weapon is on view it is ready to use," he said.

Police have regularly fired tear gas and rubber bullets since the protests began in June, but it is extremely rare for officers to be seen carrying assault rifles.

It is also extremely rare for them to use live rounds. Police first used lethal force in October, with one protester injured by live fire. Another protester was shot in the torso last week.

It's 6.p.m. in Hong Kong and hundreds of protesters are still occupying Nathan Road -- one of the main arteries through Kowloon.

Police have pushed protesters north, with the demonstrators huddling under umbrellas and makeshift shields.

It's been a cat-and-mouse chase all day with neither side giving up much ground.

Protesters have been attempting to divert police resources so that those still inside Hong Kong Polytechnic University -- which is just a few hundred meters away (around 600 feet) -- can escape.

The number of protesters still barricaded inside the university is estimated at between 100 to 1,000. They have occupied the site since Thursday, despite repeated police clearance attempts.

Ted Hui, a Democratic Party lawmaker in Hong Kong, told CNN there were still up to a thousand protesters inside the Hong Kong Polytechnic University.

Speaking to CNN from inside campus in the late afternoon, Hui said that "it's a total blockage, and we cannot go out."

The protesters have stockpiled petrol bombs and other weaponry inside the university, but "they are not trying to hurt anyone," Hui said -- just "defend" the university from police trying to enter.

If the police gave the protesters a way to leave the campus peacefully, they would do so, said Hui, pointing out that many protesters there were high school students who had gone to the university to support the movement.

"I would say that the majority of students here right now, they actually just want to leave and go home," he said.

A number of protesters who did try to leave the campus earlier today were tackled and arrested by police. At a press conference later in the day, police said they had fired tear gas because protesters running out of campus were holding petrol bombs.

The bloody unrest that began last week has continued today, with protesters and police facing off at the Hong Kong Polytechnic University. There is still a small group of between 100 to 1,000 protesters inside the university, despite police orders to leave.

Here is what's going on:

While the ongoing protests in Hong Kong have been violent for months now, protesters have expanded their arsenal in recent weeks, posing more of a challenge and a danger to police -- especially in regard to the ongoing standoff at the Polytechnic University, where student protesters have stockpiled a variety of potentially lethal weapons.

Police have ramped up their own tactics in response and threatened to use live ammunition.

Petrol bombs: These have become the primary weapon of the protests. After they occupied multiple campuses across the city last week, protesters began stockpiling petrol bombs in large numbers, and even set up ranges where people could learn to throw them more effectively.

Homemade napalm: Protesters have been seen mixing petrol with easily acquired household items that can be used to create a form of napalm -- a gel-like substance that sticks to what it hits and burns more fiercely than petrol alone. Several police vehicles have been struck with what appears to be napalm-filled bottles.

Bricks: Used both as missiles and to obstruct police advances, the many cobbled streets around Hong Kong have been a boon to protesters.

Arrows: Since the occupation of Chinese University last week, protesters have begun arming themselves with bows and arrows, apparently taken from the school's sporting equipment. A police officer was shot through the leg with an arrow last week. Often the arrows are set alight before being fired.

Catapults: At both Chinese University and the Polytechnic University, protesters built large catapults to aid them in flinging petrol bombs and bricks over their lines at police.

Explosive devices? A major concern throughout the protests has been the suggestion among some protesters that they begin using more serious explosives against police. Multiple people have been arrested on suspicion of possessing explosive materials, and on Monday photos were sent to CNN of an apparent gas canister with screws and other bits of metal strapped to it. It was unclear if the canister could be detonated or what it contained.