Our live coverage has ended. You can read more about the protests here.

According to CHRF, those numbers are unprecedented. Police estimated that the 338,000 people followed the protest's original route.

In a statement released by the group Sunday night, CHRF said demonstrations will continue until the government withdraws the extradition bill in its entirety, releases arrested protesters and withdraws all charges, retracts the characterization of the protests as a "riot" and forces Chief Executive Carrie Lam to resign.

"Should the government refuse to respond, only more Hong Kongers will strike tomorrow," CHRF said.

Joshua Wong, the young leader of Hong Kong’s 2014 “Umbrella” movement, will be released from prison on Monday, according to his pro-democracy political party Demosisto.

The news broke amid historic demonstrations against a China extradition bill Sunday night.

Wong, who spent much of 2017 in prison for his role in the protests and was sent back last month for contempt of court, has called for the scrapping of government proposals aimed at easing extradition of wanted suspects to mainland China.

In an opinion piece penned for Time magazine earlier this week, Wong said that Hong Kong’s extradition law would be a “victory for authoritarianism everywhere” and urged the United States to act.

“As American security and business interests are also jeopardized by possible extradition arrangements with China, I believe the time is ripe for Washington to re-evaluate the U.S.–Hong Kong Policy Act of 1992, which governs relations between the two places. I also urge Congress to consider the Hong Kong Human Rights and Democracy Act. The rest of the international community should make similar efforts,” Wong wrote.

“Do You Hear The People Sing?,” a song from musical Les Misérables and the anthem of Hong Kong protests in 2014, has resurfaced in demonstrations over the controversial China extradition bill.

A large group of demonstrators belted out the song in unison under a footbridge next to the police headquarters Sunday afternoon in Hong Kong. Crowds circling the singers cheered: "Encore!"

The rousing chorus: “Do you hear the people sing?/Singing the songs of angry men?/It is the music of the people/Who will not be slaves again!” is sung in the musical as students prepare to launch an anti-monarchist rebellion in the streets of Paris.

In recent years it has been picked up as the soundtrack for demonstrations from Ukraine to the US.

Faced with yet another huge protest over her handling of the China extradition bill, Hong Kong's leader Carrie Lam issued a rare apology Sunday night.

Hours after the demonstrations started, the government said in a statement that Lam had admitted "deficiencies" in the government's work had led to "substantial controversies and disputes in society, causing disappointment and grief among the people."

Full statement from a government spokesman:

Over the past two Sundays, a large number of people have expressed their views during public processions. The Government understands that these views have been made out of love and care for Hong Kong.
The Chief Executive clearly heard the views expressed in a peaceful and rational manner. She acknowledged that this embodied the spirit of Hong Kong as a civilised, free, open and pluralistic society that values mutual respect, harmony and diversity. The Government also respects and treasures these core values of Hong Kong.
Having regard to the strong and different views in society, the Government has suspended the legislative amendment exercise at the full Legislative Council with a view to restoring calmness in society as soon as possible and avoiding any injuries to any persons. The Government reiterated that there is no timetable for restarting the process.
The Chief Executive admitted that the deficiencies in the Government's work had led to substantial controversies and disputes in society, causing disappointment and grief among the people. The Chief Executive apologised to the people of Hong Kong for this and pledged to adopt a most sincere and humble attitude to accept criticisms and make improvements in serving the public.

Large numbers of young protesters have regrouped on the same street they were expelled from by police just days earlier, with tear gas and rubber bullets.

Sitting peacefully on Harcourt Road, black-clad protesters said they were considering staying for hours or even overnight on the usually busy street.

Harcourt Road runs through the middle of Hong Kong's affluent Admiralty district, alongside the city's Legislative Council building. It was one of the main sites of 2014's Occupy protests.

The mood Sunday was completely different to earlier in the week, with a tiny almost invisible police presence and relaxed crowd, almost none of whom were wearing face coverings or helmets and other safety gear.

Outside the central government offices a large crowd called for Carrie Lam to resign but even there the mood was far less hostile than Wednesday and no one was obviously equipped for renewed skirmishes with police.

While the mood could change, Hong Kongers appear to have not only come out in great numbers, but shown they can do so completely peacefully.

Near the glitzy Pacific Place mall, piles of white flowers have been left stacked beside the road and on the concrete divider in memory of a protester who died on Saturday morning.

While demonstrators were encouraged to wear black on Sunday, many also pinned white flowers to their chests in his memory.

In the early hours of Saturday morning, while holding banners opposing the China extradition bill, the man fell from a podium in Hong Kong's Admiralty district.

He was rushed to hospital but died soon after, Hong Kong police said. Many of the exact circumstances that led to his death still remained unclear Sunday night.

But protesters were clearly prepared to honor his memory.

A second memorial was set up near the Legislative Council offices on Harcourt Road on Sunday, complete with the yellow raincoat which became a symbol of Wednesday's protests.

"He sacrificed a lot for us," 16-year-old school student Athena told CNN. 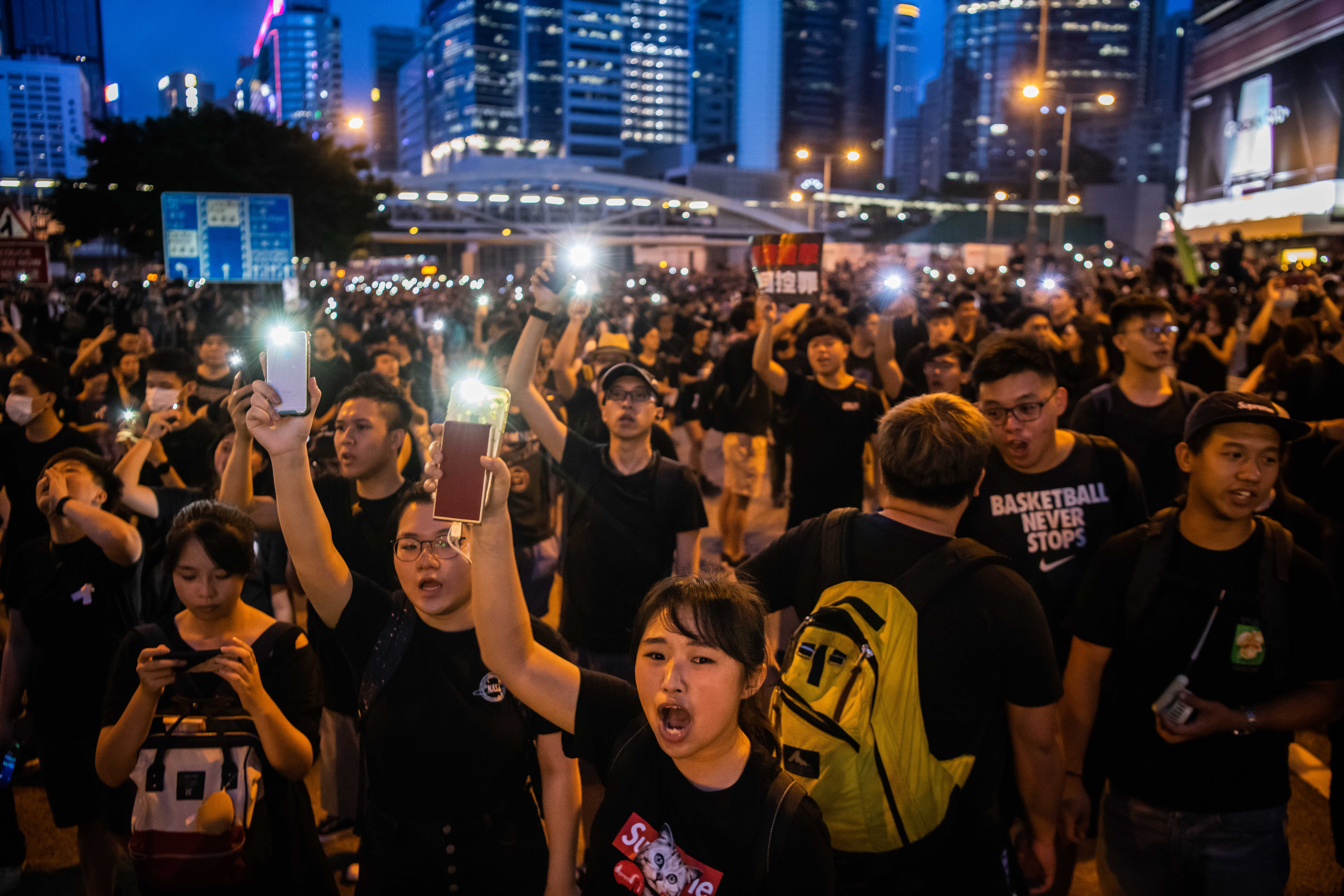 The sun has set in Hong Kong and there is still no end in sight for a mass demonstration that has brought the city's streets to a standstill.

The suspension of a controversial bill that would allow extradition to China was not enough to stop protesters from turning out in huge numbers. Organizers estimate the crowds could be even bigger than last Sunday, when as many as 1.03 million people rallied in the city.

Instead of being assuaged by the postponement of the extradition bill, demonstrators seem to be more energized than ever. They’re demanding that the bill be scrapped entirely and that Hong Kong Chief Executive Carrie Lam step down over her handling of the issue.

Chants of “Lam resign” and “withdraw the bill" could be heard reverberating across the sea of peaceful protesters as night fell.

Many of those demonstrating are also outraged over perceived police brutality during Wednesday’s protest, which Lam described as a “riot.”

Lam has promised to "keep improving and serve the citizens," acknowledging many people were angry and upset, but whether her apology will be enough to assuage protesters remains to be seen.