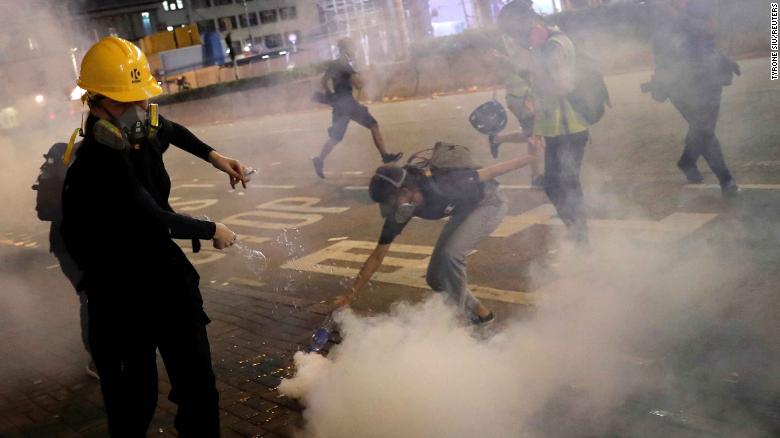 Police and protesters are facing off in Sham Shui Po in Hong Kong, according to CNN teams on the ground.

A religious laser vigil was taking place when the clash started. 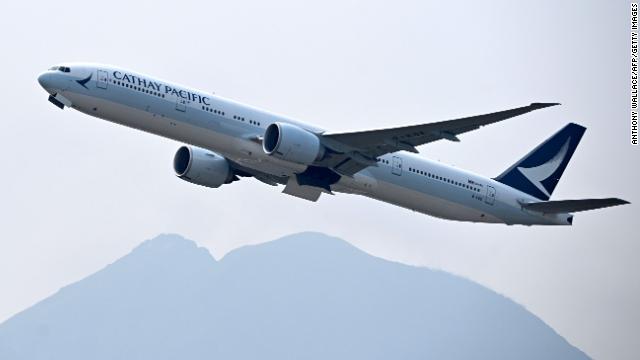 Cathay Pacific Airways released a press release Wednesday stating that it has terminated two pilots without disclosing the reason. However a well-placed source within the company tells CNN the pilots were fired in association with activities related to on-going Hong Kong protests.

Cathay’s statement did not name the two pilots.

In a memo to staff Monday, the company said it “has a zero tolerance approach to illegal activities” and that it will comply with China’s ban on company staff who participated and supported protests in Hong Kong.

The company source tells CNN that one of the pilots terminated was charged with rioting in Hong Kong and had been suspended from duty since July 30.

A Hong Kong lawmaker warned that the territory could turn into a “mainland city” without the “one country, two systems” protections.

“We are very worried that perhaps more escalation of violence will happen and we might be turning into a mainland city without the protection of the one country two systems rule very soon.”

Some background: Hong Kong's defacto constitution, the Basic Law, states that Hong Kong will co-exist with China as "one country, two systems" for 50 years after the handover of power in 1997. Due to expire in 2047, it states that the city "shall safeguard the rights and freedoms of the residents." One of the tenets contained in the Basic Law, and reaffirmed by Lu Ping, China's then-top official on Hong Kong, was the right to develop its own democracy.

On Tuesday night, Cheung tried to intervene in a tense situation at Hong Kong’s airport when protesters detained a journalist from Chinese state media Global Times.

Cheung told CNN on Wednesday that the events from the night before were in opposition to what protesters have been trying to achieve the past but months but that their concerns are still valid.

“Although we don’t agree to that situation in the campaign, the movement itself is still very valid. The threats are still there," he said.

The government of Hong Kong has created a page on one of its tourism websites offering tourists information on “known processions, public transport and airport situation, as well as Government responses to the protest actions and public disruptions.”

Hong Kong has been seeking to reassure travelers that it is still open for business and dispel international concerns over the protest chaos that has been broadcast worldwide.

"This online portal puts the facts at your fingertips covering transportation advice in relation to protests, clarifications of fake news, government press releases, conferences and events and more. It provides useful and timely information for businesspeople, travelers and residents alike," the page reads.

Here's a link to the page.

Almost 1,000 flights were affected by the protests this week at Hong Kong’s airport, according to the CEO of the Hong Kong Airport Authority.

Lam Tin-fuk said a court injunction issued today, which restricts people from accessing the airport, was the only way to ensure safe operation of the airport.

The CEO refused to disclose the number of airport security members on duty last night, but said that they had tried their best and couldn't contend with such large crowds.

Lawmaker Priscilla Leung said there was no justification for the levels of violence on display at the airport yesterday. “I don’t buy the protesters’ excuses," she said.

Another Hong Kong politician, Gary Chan, called for the pan-democracy camp to condemn the violent acts.

Several of the lawmakers at the press conference specifically condemned the protesters who held a man for several hours last night, accusing him of being an undercover police officer and refusing to let paramedics through when he appeared to lose consciousness.

The Chinese central government said earlier today that the unconscious man was a mainland Chinese resident.

“Is it acceptable to be detained and treated this way because they have a certain background or identity?" said pro-Beijing lawmaker Starry Lee today.

After the chaos at the airport last night, some protesters are saying they're sorry.

On Telegram -- an encrypted messaging app popular with protesters -- some are sharing images apologizing for last night. But it's unclear how widespread these feelings are within the movement, because only a small handful of people have posted these sentiments.

One person, who posted anonymously in a Telegram group with more than 34,000 members, explained that people had become more aggressive after police posed undercover as protesters.

"This has led to our unsuppressed anger and overly aggressive way to respond," the person wrote.

Another post on the app was of a picture featuring a yellow hard hat -- something protesters often wear to demonstrations as a safety measure -- alongside this message: 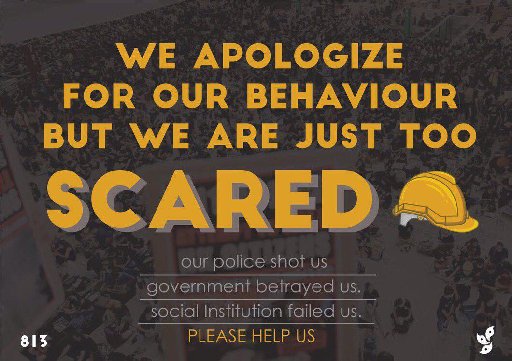 Joshua Wong, who was a leader of the 2014 Umbrella Movement, also tweeted an apology, saying that: "Hong Kong is sick."

"We thank you for your tolerance and understanding," he said.

The Telegram channel's admin group is anonymous, and no group or spokesperson released these messages. The protest movement does not have a centralized leadership that conveys messaging.

In addition to the apologies, a handful of other posts appear to show protesters urging their fellow demonstrators not to apologize.

"Whoever apologized means they are breaking off their relationship with front-line protesters," wrote one user of LIGHK, an online forum that is considered Hong Kong's answer to Reddit.

At a press conference today, the Hong Kong police condemned last night's protests and said the airport was not the place for protests.

Police accused protesters of assaulting and imprisoning one man, and preventing medics from assisting him. Mak Chin-ho, the assistant commissioner of police, said it took a few hours to reach the injured man because "some protesters made roadblocks and used laser pointers on our colleagues and stopped us from going forward.”

Mak said one police officer pulled out a gun in defense after “protesters pushed him to a corner to beat him up, and grabbed his pepper spray and baton.”

Five men, aged from 17 to 28, were arrested for unlawful assembly, assaulting police officers, and possession of weapons. They are still in custody.

Police warned that carrying out illegal activities at airports could incur heavier penalties up to life imprisonment.

The airport has also received a court order banning protesters from illegally protesting there again. The order also authorizes police officers to arrest those "reasonably believed" to be violating the rules set out by the court.

It's normally a smooth ride from Hong Kong to the airport on the Airport Express train -- it runs every 12 minutes, and you simply buy a ticket and hop on.

But today, the train is running at 25-minute intervals.

And once passengers get off the train at the airport, there are security measures in place -- only passengers with boarding passes and passports are being let into the terminals.

Long lines are forming as passengers wait to show their documents.

Some of the new measures are in line with a court injunction, published by the airport earlier today, which bans illegal protests at the airport. Anybody who obstructs airport services or transit systems can be held in contempt of court and may be fined or imprisoned.