In a video statement on their social media, Hong Kong police announced it would be clearing the area around the Legislative Council building.

Due to the violent actions of the protesters, the police will clear the scene around the LegCo building shortly,” the spokesperson said.

"The police will take appropriate force in the event of obstruction or resistance," the spokesman added.

Protesters were advised to clear the building as soon as possible, as the police condemned the violence and forced illegal entry into the building. 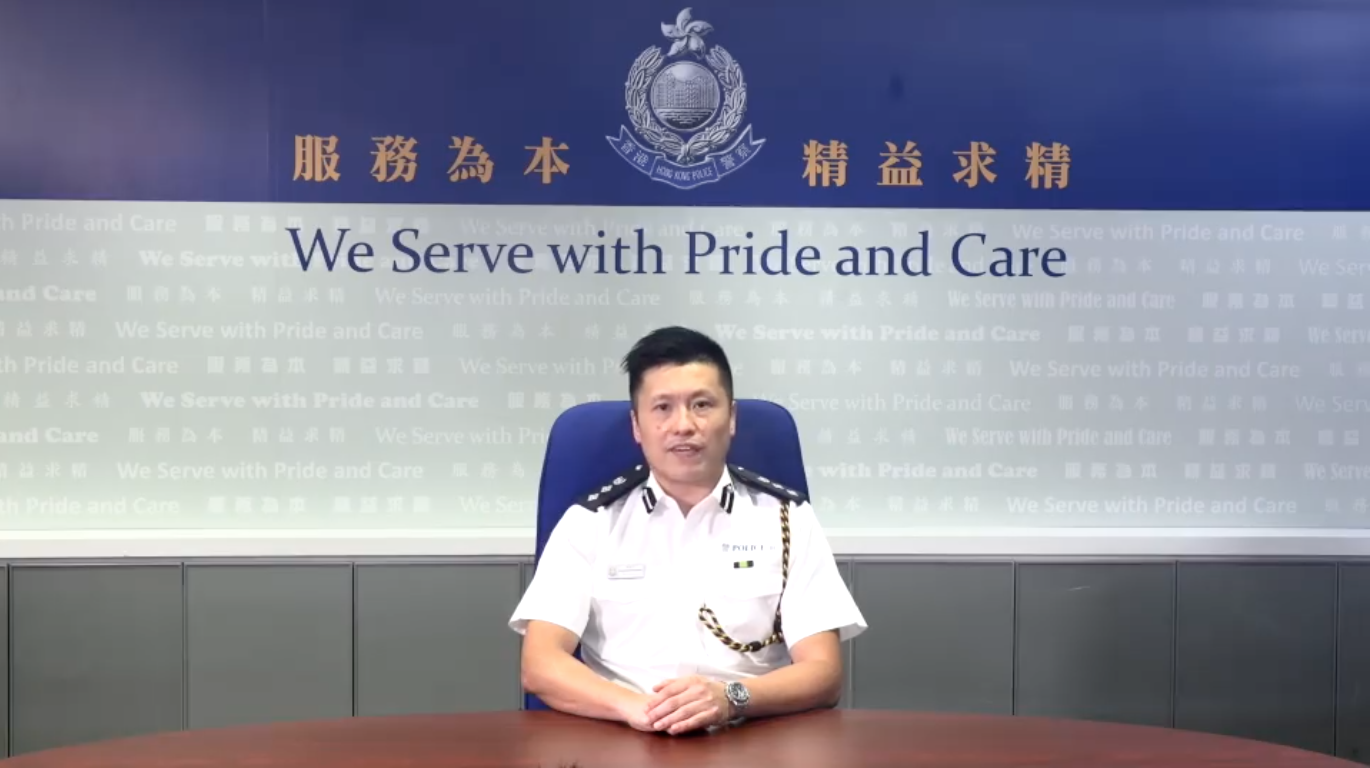 Hong Kong protesters have raised a black sign in the heart of Hong Kong's government, saying: "There is no way left."

On the reverse side, it reads: "There's no rioters, there's only tyranny."

The sign is a response to police claims that protesters engaged in rioting during the June 9 demonstration against the extradition to China bill.

The Hong Kong government has demanded that the protesters currently trashing the Legislative Council building “stop at once.”

In a statement, it condemned protesters for storming the government building saying they were affecting everyone’s safety.

The government added that the official annual July 1 march had been done in a peaceful and rational manner and said that it respected people’s right to demonstrate and voice their opinion.

Speaking inside the Legislative Council, which has been taken over by protesters, pro-democracy Labour Party lawmaker Fernando Cheung called the storming of the building a mistake.

“This is a complete trap, I’m sorry that people played into it," he said.

"Protesters could have been easily cleared by police, we’re not talking large numbers. The police did not do anything, they wanted this to happen, they wanted the public to see this.”

Cheung said that so far the protests had been "really reasonably" and "really peaceful."

But he said he understood that young people feel desperate. "They feel the lives of their comrades have been taken by the regime," he said.

Hong Kong protesters are now in the Legislative Council chamber ... the very heart of the government.

After spraying slogans in Cantonese on the wall behind the President's chair, one protester attempted to hang the British colonial-era flag over the city's crest. 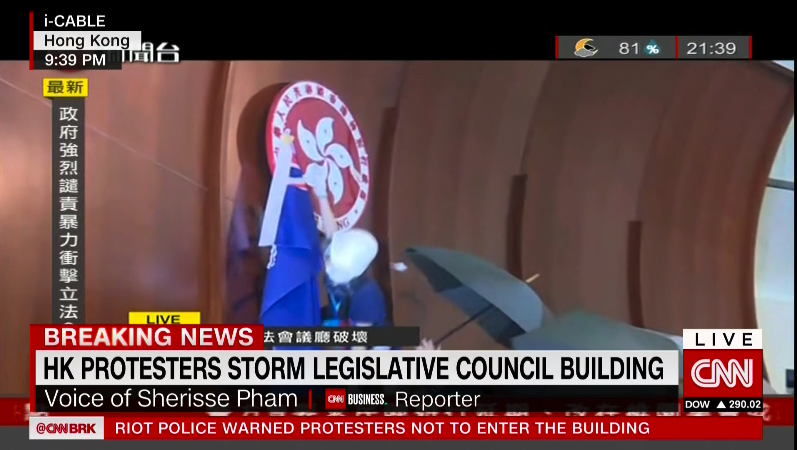 But unable to get it to stay up, they instead spray painted the red Bauhinia crest black and hung the flag off the podium of the Legislative Council President's desk. 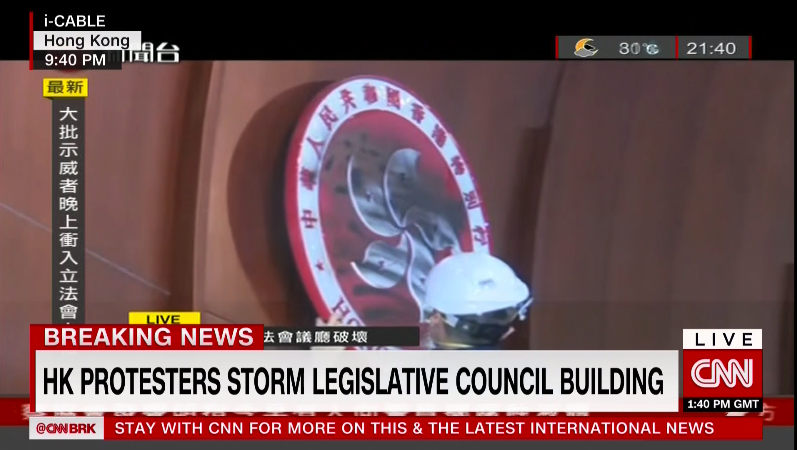 Hong Kong was a British colony until 1997, when it was handed back to China.

The British colonial flag has become a regular sight at protests in recent years.

Protesters are vandalizing the heart of the Hong Kong's government, tearing portraits off the walls and spraying painting slogans on the walls and furniture.

In the main lobby of the Legislative Council, demonstrators have written on the wall: "HK Gov f**king disgrace" in English.

Underneath, in Cantonese it says: "Release the martyrs."

Meanwhile, other protesters are tearing the building's furniture apart, destroying computers and ripping down displays.

Never in the recent history of Hong Kong protests have demonstrators been so actively destructive or angry.

Protesters are cheering and waving umbrellas in the air inside the Hong Kong Legislative Council building, where just hours ago stood dozens of riot police.

Early images from inside the government headquarters show the demonstrators are very much in control of the building for now.

Imagine if the US Congress was stormed en masse by a group of angry young protesters or if the Houses of Commons at Westminster was occupied.

This is what has happened in Hong Kong tonight.

After a day of angry clashes between protesters and police, and vandalism of the building's exterior, demonstrators finally breached a metal shutter leading to the building just before 9 p.m. local time.

Riot police who had been standing behind the door retreated, effectively leaving the building to hundreds of protesters who poured inside.

Inside the building, the atmosphere is a mix of cheering and destruction, as demonstrators smash everything in sight while chanting "add oil." 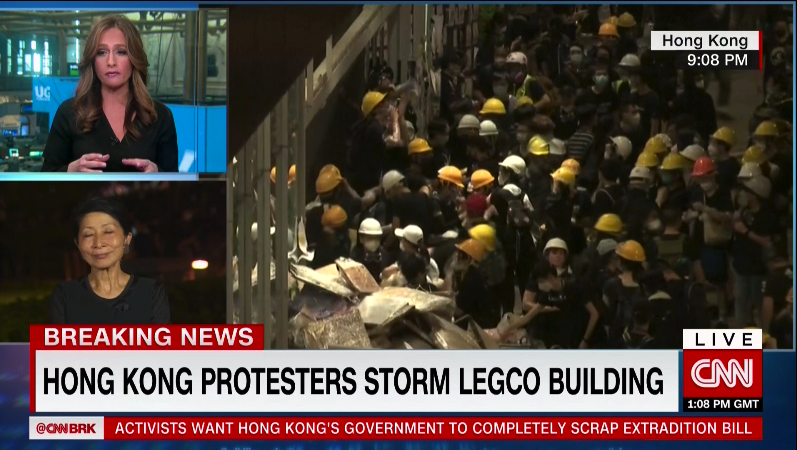 They'd been leading up to it all day. But this is the moment protesters finally stormed the Hong Kong government headquarters.

Hundreds are now pouring into the main areas of the building. Police appear to have retreated.

Here are the protesters breaking through the metal shutter.