Our live coverage of the protests in Hong Kong has ended. Scroll through the posts below to read more about the events.

Hong Kong's pro-democracy demonstrators formed a human chain across the territory on Friday evening in a show of solidarity for the city's protest movement.

The action was planned to coincide with the 30th anniversary of the "Baltic Way," a historically significant peaceful demonstration against Soviet occupation.

On August 23, 1989, an estimated 2 million people formed a 600 kilometer (372 miles) human chain across the three Baltic states of Estonia, Latvia and Lithuania.

Friday's protest was a peaceful event. At some places, people were singing and chanting pro-democracy slogans.

Protests have been happening for more than two months in Hong Kong.

Initially, the focus was on a now-suspended extradition bill that would have allowed China to extradite people from the territory.

Since then, demands have expanded to include calls for democracy and political reforms.

Lion Rock hill, which is one of Hong Kong's most famous views, was illuminated on Friday, as pro-democracy protesters gathered there to form a human chain.

Lights from its peak were visible from across the city as demonstrators used their phones as torches.

People attending Friday's protests once again made the gesture of covering one of their eyes, in solidarity with a woman whose eye was badly injured on August 11.

Demonstrators claim she was hit by a police projectile. Her injury has since become one of the symbols of the protest movement, with many supporters wearing face patches or masking an eye with a hand. 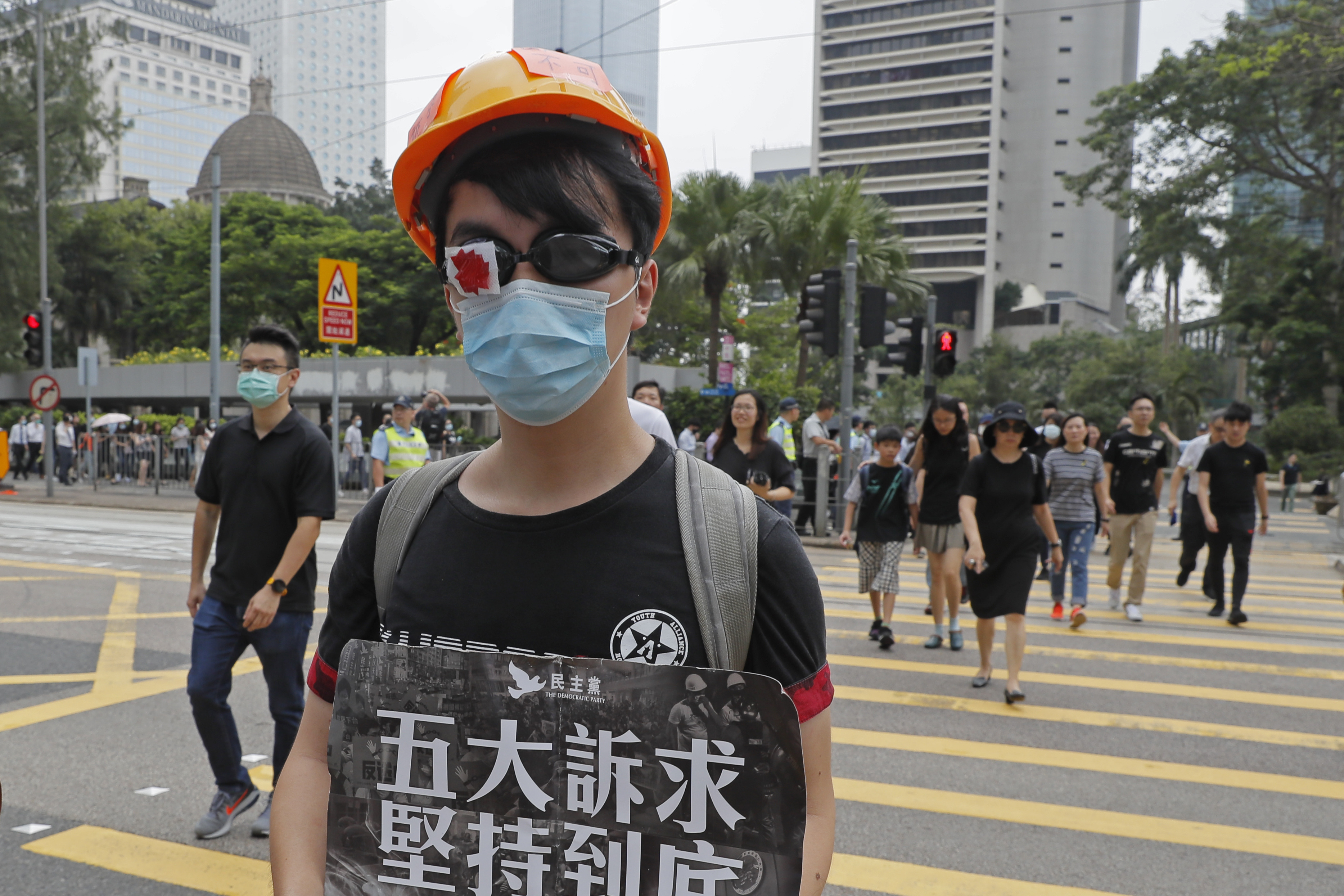 Felix Wong, 33, has been coming to the protests for months. She has been at most of the weekend demonstrations in the past few weeks. It's tiring, she said.

At one point in the evening, Wong started crying. She said that in the last couple of months she has been getting upset easily.

The most devastating thing, she said, is when people try to portray her and other peaceful protesters as violent. News articles and the scenes around her often bring tears to her eyes.

"It's just so hopeless, we just keep asking for the same thing, we try every way... we just need to keep encouraging each other," she said.

Wong and her friend were carrying foreign-language signs thanking people around the world for their support.

People of a wide variety of ages are demonstrating in Hong Kong tonight, joining the human chain lining the city's streets.

Cheung, a 59-year old surveyor who would only give his first name, came with a friend. He said he has been joining the protests for a while and intends to keep going until the government agrees to the protesters' demands.

Cheung and his friend said they liked the idea of the human chain. "It's quite meaningful, it's symbolic," he said.

He recognizes he is something of an outlier when it comes to age.

The atmosphere is joyful in some parts of city. Protesters are waving illuminated phones and singing songs from the Les Miserables musical, reading the lyrics from sheets of paper.

Demonstrators gathered on Queensway are chanting to fellow protesters who are lined up on the bridge above. Their chants include: "Liberate Hong Kong," "Time of Revolution" and "We have five demands."

The gatherings have an upbeat vibe. People appear optimistic and there is a sense of community, as strangers befriend each other while forming the chain.

However, when a car flying a Chinese flag drives by, people start yelling and giving it the thumbs-down gesture.

A number of taxis have been spotted driving around the city displaying Chinese flags -- something that has not happened on this scale during previous protests.

Some protesters at tonight's event are covering their faces and guarding their identities.

Chan, a 27-year-old student who wouldn't share his last name, said he has been coming to the protests almost every week. On Friday, he was wearing a mask, reflective glasses and a hard hat.

"The Hong Kong government has many CCTV (security) cameras in the streets and they can easily track people who come to the protests," he said. "I am covering my face to protect my friends, my family and all people related to me."

Demonstrators were also seen gathering at Tsim Sha Tsui station, on Johnston Road in Wanchai and along Queensway.