However, Dr. Tam added that there are currently no confirmed cases of the virus in Canada.

Three major airports in Canada have ramped up their screening processes. International travelers arriving in Toronto, Montreal, and Vancouver International Airport have signage on electronic arrival screens reminding them inform a border service officer if they are experiencing flu-like symptoms. An additional health screen question has also been added to electronic kiosks.

“It is important to stress that entry screening alone is not a guaranteed against a possible importation of this new virus,” Dr. Tam said. “It remains an important public health tool and part of a multi-layered government response.”

Dr. Tam said there is currently no specific vaccine against the novel coronavirus.

Over 600 people have been infected with the virus worldwide.

A group of Chinese exchange students visiting the US are no longer participating in on-campus activities with Longfellow Middle School students in Fairfax County, Virginia, according to a letter from the administration sent to parents yesterday.

“While health officials believe the risk of illness transmission of the novel Coronavirus from these students is extremely low, we felt it necessary to make this adjustment,” it said in the letter.

According to school spokeswoman Lucy Caldwell, the students are visiting from Yi Chang, which is located in the Hubei province. Wuhan is the capital of Hubei. The exchange students are expected to stay in the DC area for a week before making other stops in the United States, Caldwell said.

Longfellow Middle School students have an exchange trip to Yi Chang scheduled for early April that hasn’t been canceled yet. They will monitor the situation and make a determination at a later time, Caldwell said.

Caldwell provided CNN with a copy of letter sent to parents:

In an abundance of caution, we have decided to redesign the cultural exchange program that Longfellow MS was scheduled to begin today, January 22. Although the students will not be visiting Longfellow MS, we will offer to work collaboratively with the travel company to facilitate cultural and educational activities in the DC area so that the students enjoy a positive experience.

Student and staff health and safety remain our first priority. While health officials believe the risk of illness transmission of the novel Coronavirus from these students is extremely low, we felt it necessary to make this adjustment.

Thank you for your understanding and support.

The Wuhan coronavirus does not yet constitute a public health emergency of international concern, according to an emergency committee convened by the World Health Organization.

"The advice to the [director-general], which is provided by the emergency committee, is that now is not the time” and that it is "too early to consider that this event is a public health emergency of international concern,” committee chairman Dr. Didier Houssin told reporters Thursday.

The announcement came shortly after the committee was convened over two days in Geneva to advise WHO leadership on the outbreak. The organization was expected to make an announcement Wednesday, but WHO Director-General Tedros Adhanom Ghebreyesus then told reporters that he did not have enough information to make a decision, and the committee was asked to reconvene a second day.

WHO defines a public health emergency of international concern as "an extraordinary event" that constitutes a "public health risk to other States through the international spread of disease" and "to potentially require a coordinated international response." Previous emergencies have included Ebola, Zika and H1N1.

While Ghebreyesus praised the Chinese government and its cooperation with WHO on Wednesday, Houssin then expressed that the information they had from Chinese authorities was too limited and imprecise for the committee to make a recommendation that day. The committee remained divided — roughly 50/50 — over the course of the two-day meeting, Houssin said Thursday.

Advisers to the US Centers for Disease Control and Prevention have told CNN they are concerned that Chinese health officials have still not released basic epidemiological data about the Wuhan coronavirus outbreak, making it more difficult to contain.

WHO has played a number of roles in the international response to the outbreak, including coordinating with international authorities and researchers, as well as developing guidance for lab testing, treatment and prevention measures.

According to a Scottish government spokesman, five people being tested for Wuhan coronavirus, a higher number than previously reported.

“Following travel to Wuhan, China, two people confirmed as diagnosed with influenza are now being tested for Wuhan Novel Coronavirus as a precautionary measure only. Three further people are also undergoing testing on a similar precautionary basis," he said.

However, he emphasized that “there are currently no confirmed cases of Coronavirus (WN Co-V) in Scotland and the risk to the Scottish public remains low."

There are no cases of coronavirus in Saudi Arabia, the Saudi Center For Disease Prevention And Control tweeted on Thursday.

"There are no cases of the coronavirus(2019-nCoV)in #Saudi_Arabia so far," the tweet read.

Cases have spread out from an epicenter in the central Chinese city of Wuhan, home to 11 million people.

The US Centers for Disease Control and Prevention (CDC) gave Wuhan its highest level of travel notice, recommending travelers avoid all non-essential travel to Wuhan.

The agency gave the rest of the country a level one travel advisory, telling people to "remain alert if traveling to other parts of China.”

The total number of confirmed cases is well over 600 worldwide. 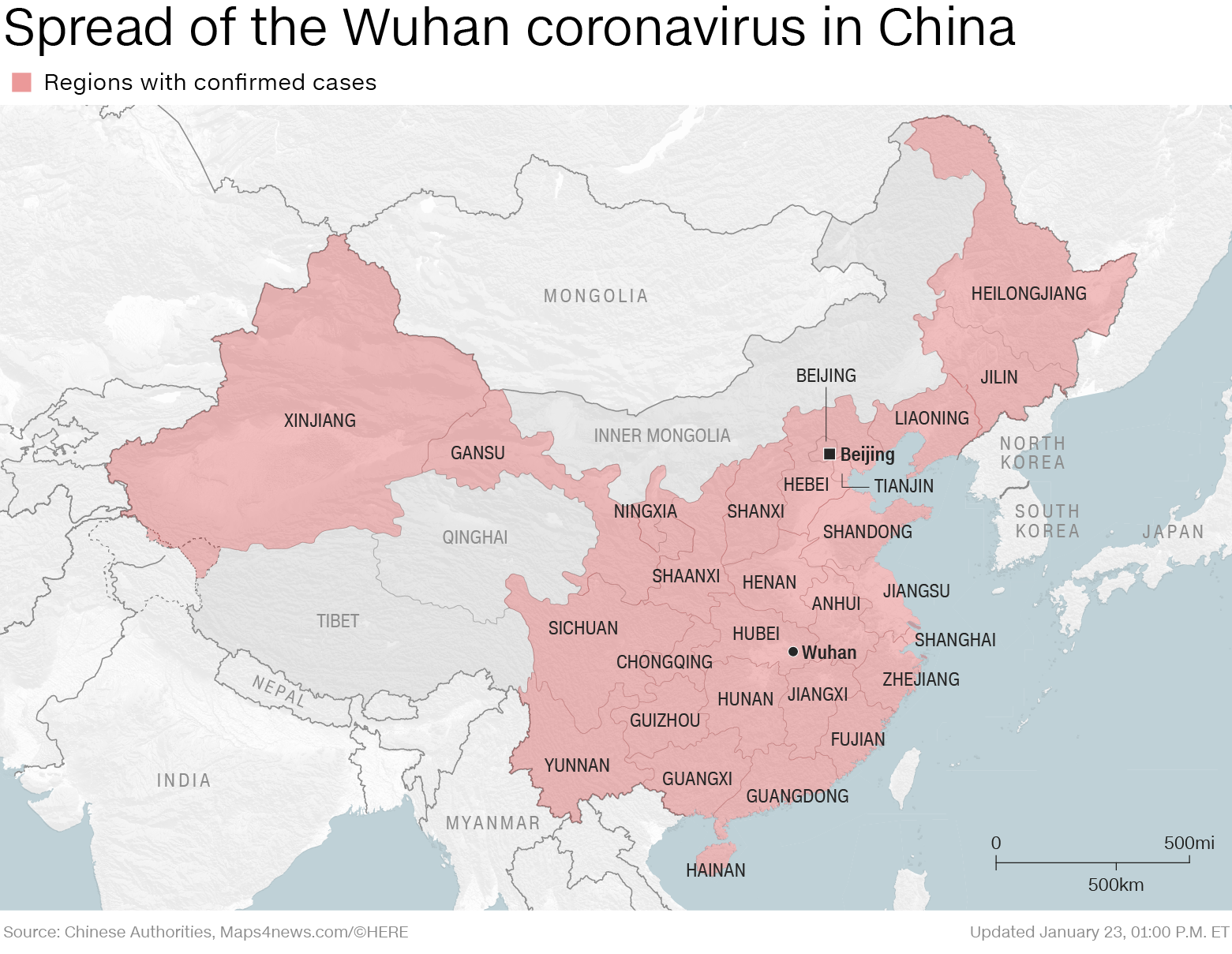 Two cases of Wuhan coronavirus in Hong Kong have been confirmed, according to a statement from Hong Kong’s Department of Health on Thursday.

The Hong Kong Department of Health said the patients who were infected tested positive for the virus and that the patients are in stable condition. The department is continuing its investigation into the cases.

The US Centers for Disease Control and Prevention (CDC) has raised its travel notice for Wuhan, China, to the highest of three levels, according to its website.

"CDC recommends that travelers avoid all nonessential travel to Wuhan, China,” it said in announcing the increase to “Warning - Level 3” status.

The CDC recommends that travelers “remain alert if traveling to other parts of China” by avoiding contact with sick people, animals and animal markets. China as a whole carries a “Watch - Level 1” travel advisory.

For those who traveled to China in the past two weeks and have symptoms such as fever, cough or trouble breathing, the agency recommends seeking immediate care, avoiding contact with others, not traveling, and practicing proper hygiene.

The CDC says that symptoms of the Wuhan coronavirus may appear in as little as 2 days and up to 14, according to its website. This is based largely on what the agency knows about MERS — a different type of coronavirus.

Health experts say there is still a lot to unravel about how — and how quickly — the virus spreads.

"At this time, it’s unclear how easily or sustainably this virus is spreading between people,” the CDC said.