China’s health minister Ma Xiaowei had some very bad news Sunday about the Wuhan coronavirus: He said people can spread it before they have symptoms.

A veteran adviser for a US health agency called the news a "game changer."

“When I heard this, I thought, ‘oh dear, this is worse than we anticipated.’ It means the infection is much more contagious than we originally thought,” said Dr. William Schaffner, a longtime adviser to the Centers for Disease Control and Prevention.

Schaffner added that this new piece of information called into question the current US practices for containing the virus so it doesn’t spread beyond the three cases that have already appeared in Washington state, California, and Illinois.

Schaffner, an infectious disease expert at Vanderbilt University Medical Center said that if Ma is correct, “we’re going to have to re-evaluate our strategy, that’s for sure."

And if so – and information about this virus is constantly evolving -- for about two weeks, people who don’t even know they’re sick can spread the virus, which has killed more than 50 people in China and infected thousands.

The disease has spread as far as France, Canada, and the US, which now has three cases in California, Washington state, and Illinois.

In a press briefing Friday, Dr. Jennifer Layden, an epidemiologist with the Illinois Department of Health, said the woman with the Wuhan coronavirus in her state had not been sick while traveling from Wuhan to the US on January 13, and “based on what we know now about this virus our concern for transmission before symptoms develop is low so that is reassuring.”

She explained that officials were following “close contacts” of the patient. She did not mention following other kinds of contacts, such as the other passengers on the woman’s January 13 flight.

This post has been updated to clarify Ma Xiaowei's honorific.

Japan confirmed a fourth case of the Wuhan coronavirus on Sunday, the country’s Ministry of Health, Labor and Welfare said in a statement.

The latest case is a man in his 40s who traveled from Wuhan and arrived in Japan on January 22.

He showed no symptoms at the time of his arrival but started suffering from a fever and joint pain on the 23rd. He went to a hospital in Aichi prefecture in central Japan on the January 24 and was hospitalized after symptoms of pneumonia were found.

The man still has fever, but his condition is stable. He told authorities he hasn’t visited the seafood market in Wuhan -- the epicenter of the outbreak.

It is unclear whether he had contact with any pneumonia patients.

Authorities in Cote d'Ivoire have tested the first person on the African continent for the Wuhan coronavirus, Cote d'Ivoire’s Ministry of Health and Public Hygiene said in a statement Sunday.

An Ivorian student who traveled from Beijing to Abidjan experienced symptoms such as coughing, sneezing and difficulty breathing, the ministry said.

The student was moved to a safe location on arrival at the airport and is currently under medical observation, the ministry said.

Authorities believe it is a case of pneumonia and not coronavirus, but the final diagnosis will be made after the analysis of the tests results, the ministry said.

The ministry urged residents not to panic, to maintain proper hygiene and to visit the closest health center in case of fever, cough or breathing difficulties.

The Chinese community in Paris has canceled its Lunar New Year parade planned for Sunday at the Place de la République as a precautionary measure against coronavirus, the city’s official Twitter account said.

"The Chinese community in Paris has decided to cancel the parade planned for this afternoon on the Place de la République. The associations didn't have the heart to celebrate," Hidalgo told French radio Europe 1.

“We must not give in to panic but, at the same time, be vigilant and respect the decision of the Chinese associations in Paris."

There are currently three confirmed cases of coronavirus in France, the French Health Ministry announced on Friday.

The British government is "looking at all the options" to help citizens trapped in Wuhan, UK Home Secretary Priti Patel said Sunday after being asked about UK media reports that officials are examining the logistics of airlifting Britons out of the central Chinese city.

During a Sky News interview, Patel said she would not “comment specifically on newspaper stories” but the UK is doing its "utmost to stop the virus from coming to the UK and obviously becoming a widespread problem."

There are many efforts being made, and this is actually where Border Force provides information to Public Health England in terms of passengers that have traveled to and from the area. And so, they are actually contacting people and reaching out to them and providing screening and testing and that is fine.”

Before China put in restrictions on outgoing flights from Wuhan, there were three flights a week into London’s Heathrow Airport, a Public Health England spokeswoman told CNN on Saturday. 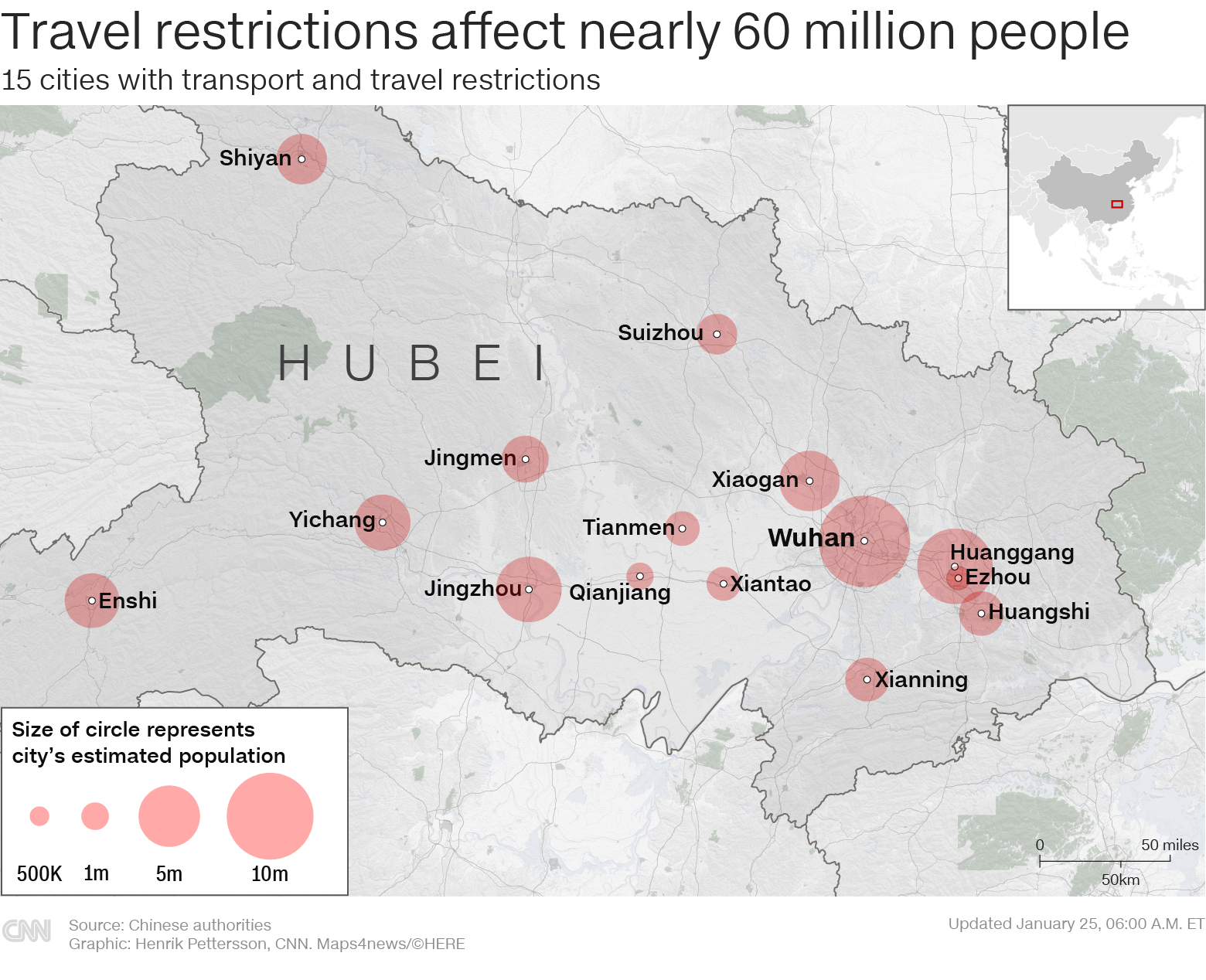 Authorities in the Chinese city of Shantou, in Guangdong Province, announced Sunday they will withdraw a lockdown and ban on the movement of vehicles that they announced earlier in the day.

Shantou will continue to allow vehicles, ferries, people and goods to go in and out of the city, but will strengthen its monitoring and prevention efforts for the coronavirus outbreak, authorities said.

Shantou was the first city in Guangdong Province to enact such a lockdown.

There are now 15 cities in China that are under full or partial lockdown by authorities, affecting some 57.2 million people.

Beijing announced on Sunday that the city will postpone the start of the spring semester for all schools in the city, including primary, secondary and universities, due to the coronavirus outbreak, according to a decree released by the Beijing Education Commission.

“To effectively curb the spread of the coronavirus outbreak on campuses of schools and other educational institutions, it is decided that the start of the 2020 spring semester will be postponed for all schools and kindergartens,” the decree said.

“Off-campus offline educational programs will also be suspended throughout the city,” it said.

A new start date for the 2020 spring semester has yet to be set.

Abe said Japan is working with the Chinese government to coordinate the evacuation.

Japan confirmed its third case of Wuhan coronavirus on Saturday.

There are about 700 Japanese nationals in Wuhan, according to national broadcaster NHK.

Hong Kong authorities will turn an unoccupied apartment building into temporary flats for quarantine and observation of people who have been in close contact with confirmed Wuhan coronavirus patients, the city's Housing Authority said in a statement.

The building, called the Fai Ming Estate, is located in the town of Fanling in the New Territories, close to the border with mainland China.

This comes as the territory confirmed its sixth case on Sunday.