Ohio Governor Mike DeWine and Columbus Mayor Andrew Ginther sent a letter to organizers of the Arnold Sports Festival saying they will take “appropriate action under Ohio law”  if spectators are allowed into the festival.

The Arnold Sports Festival is an annual multi-sport festival held in Columbus that includes the Arnold Classic, a bodybuilding competition named for Arnold Schwarzenegger.

According to the letter, the festival and the city of Columbus agreed Tuesday that the event would be closed to spectators. Then yesterday, the festival’s staff said they would close the Expo — but wanted people to be able to watch the sporting events.

The mayor and the governor said that because the competitions at the festival are general admission, spectators would be able to “attend dozens of events and travel freely from facility to facility” which would create a “unique and unacceptable risk” for the spread of the novel coronavirus.

Among their concerns is “the attendance of individuals from more than 80 countries and from other parts of the United States, including states affected by COVID-19,” they wrote in the letter.

“We stand united in our expectation that this event and its organizers abide by the original agreement reached Tuesday. In the event that organizers fail to comply with our agreement, we stand ready to take appropriate action under Ohio law to protect the health and safety of the residents of the State of Ohio and our guests,” DeWine and Ginther’s letter said.

India’s capital announced an immediate closure of all elementary schools until March 31, the Deputy Chief Minister of Delhi, Manish Sisodia tweeted on Thursday.

Sisodia wrote that the move is a "precautionary measure to prevent the possibility of spread of COVID-19" among children.

As of March 5, India has reported 29 confirmed cases of the novel coronavirus.

South Africa diagnosed a traveler returning from Italy as its first case of the novel coronavirus on Thursday.

“The patient is a 38-year-old male who traveled to Italy with his wife,” South Africa’s health minister Dr. Zweli Mkhize said in a statement. “They were part of a group of 10 people and they arrived back in South Africa on March 1, 2020.”

Mkhize said that the patient went to a general practitioner on March 3 with symptoms of fever, headache, malaise and sore throat and cough; a nurse took a swab and it was delivered to a lab and the patient went into self-isolation. The couple also have two children, the statement added.

Mkhize said that authorities were tracing contacts, the doctor is self-isolating, and a tracer team has been sent to KwaZulu-Natal province.

At the onset of the outbreak, South Africa was just one of two countries in the continent with reliable testing capabilities. That has since expanded to more than 40, according to the African CDC.

Dozens of foreign diplomats who had been quarantined in Pyongyang, North Korea over coronavirus fears have been told their planned evacuation flight on Friday is canceled, a source inside the country told CNN's Will Ripley.

The source agreed to speak on the condition of anonymity, given the extreme sensitivity of the current situation.

The source says Friday’s flight “was canceled by the Russians for unknown reasons.”

The Russian Ministry of Foreign Affairs did not confirm this information when contacted by CNN. The North Korean government has not responded to CNN’s request for comment.

The source told CNN last week North Korea’s state run airline Air Koryo had planned to operate the flight to evacuate “about 60” foreign diplomats from from Pyongyang to Vladivostok in Russia.

Germany has recorded 109 new coronavirus patients within 24 hours, according to the German centre for disease control.

There are now 349 cases in the country.

A cruise ship passenger from California died from the coronavirus on Wednesday, nearly two weeks after he returned home.

Now, the Grand Princess cruise ship he was on is being held off the California coast, so federal health officials can screen passengers and crew members.

The unidentified California patient was 71 years old and had underlying health conditions, Placer County health officials said. He was likely exposed to the virus on a cruise from San Francisco to Mexico between February 11-21.

The cruise ship's route: After the Grand Princess finished its Mexico trip, it went on another cruise to Hawaii and is now on its way back.

There are 62 passengers on the ship who sailed the previous San Francisco-Mexico voyage and remained onboard for the Hawaii one.

California Gov. Gavin Newsom declared a state of emergency and said local health officials are working with their federal counterparts to trace people who'd had contact with the patient.

"This emergency proclamation will help the state further prepare our communities and our health care system in the event it spreads more broadly," he said.

The ship is carrying about 2,500 passengers on its current voyage. Eleven passengers and 10 crew members have developed symptoms, Newsom said. 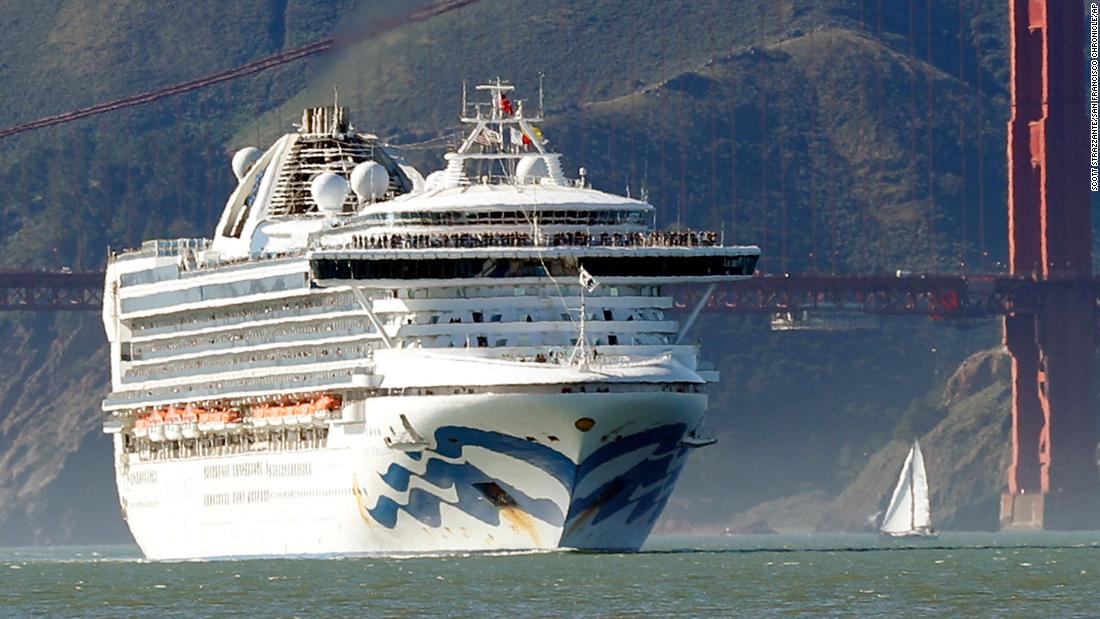 It is “highly likely” that there is now some level of community transmission of the coronavirus in the UK, the country’s Chief Medical Adviser said Thursday.

“I think we should work with the assumption that it is here at very low levels at this point in time,” Chris Whitty told parliament.

“There are now several cases where we cannot see where this has come from, in terms of a clear transmission: either because someone has come directly from overseas or because they have had a close contact with someone who has recently returned from overseas,” he added.

There are now 87 cases in the UK but Whitty said he is expecting the number to “only go up.” Britain has now moved from the “contain” phase of the government’s coronavirus action plan, to the second phase of “delay,” he said.

The delay phase of the four-stage approach to the virus will see a coordinated effort to push back the peak of the outbreak until the summer, when there are fewer winter pressures on the public health system.

England’s Six Nations rugby union game against Italy that was due to played in Rome on March 14 has been postponed due to the coronavirus outbreak, an England Rugby Football Union (RFU) spokesperson has confirmed to CNN.

The spokesperson added that it was too early to determine a new date for the fixture.

The game was scheduled to be the last match for both teams in this year’s Six Nations Championship, an annual international rugby union competition between England, France, Ireland, Italy, Scotland and Wales.

It is the second game of this year’s edition to be postponed. Ireland’s clash with Italy in Dublin, which was due to be played this coming Saturday, had already been called off on public health grounds by Six Nations organizers.

Outside those municipalities -- in the regions of Emilia Romagna, Lombardy and Veneto, among other locations -- sports competitions and training would be permitted only behind closed doors.

Sports fans from the affected regions have also been barred from traveling to other regions.

Amazon and Facebook are encouraging their employees in Seattle to stay home after workers for each company tested positive for the novel coronavirus.

Amazon revealed earlier this week that one of its Seattle-based employees had been diagnosed with the virus. On Wednesday, Facebook said a contractor who worked at one of its offices in Seattle had tested positive.

Facebook has closed the facility, which the worker last visited on February 21, for the rest of this week.

"We've notified our employees and are following the advice of public health officials to prioritize everyone's health and safety," Facebook said in a statement.

Both tech giants are encouraging employees in the Seattle area to work from home through the end of the month.

"We are recommending that employees in Seattle [and] Bellevue who are able to work from home do so through the end of the month," an Amazon spokesperson said in a statement.