"Yes, we are," the President said in response to a question about additional restrictions on travel "from certain countries where they're having more of a breakout.”

Trump didn’t name which countries were coming under consideration for new restrictions, though the United States recently upped travel warnings for Italy and South Korea, where the virus has infected thousands.

The United States has already restricted travel on people who have visited China and Iran.

Speaking in the Cabinet Room, where he was meeting with representatives from the pharmaceutical industry, Trump said it wasn’t yet necessary to declare a national emergency in response to coronavirus. He said it’s possible he could declare one in the future.

In a news briefing, Vice President Mike Pence said anyone traveling to the United States on a flight from Italy and South Korea will receive multiple screenings before arriving in the United States.

"The action the President authorized this weekend raising the travel advisory, the American people should know that we are saying that they -- you should not travel to certain sections of Italy or South Korea. Those advisories may expand, but we'll allow the case load in those countries to define that," Pence said.

Pence also did not go into specifics as to which other countries were being considered but did mention the European Union, because a passport isn't needed to travel among those countries and there have been some new cases there. 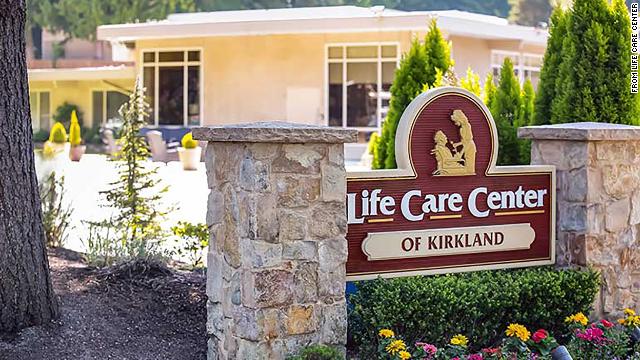 The Life Care Center in Kirkland, Washington, said it has canceled all visits to the facility by family, vendors and volunteers as the center deals with several confirmed cases of coronavirus, according to a statement from the facility's executive director, Ellie Basham.

Any resident displaying symptoms of an elevated temperature, cough or shortness of breath is placed in isolation, the statement read.

The facility has also placed a hold on new admissions, Basham said.

The UK Treasury says the country’s public health services as well as its scientists “will have the resources they need to respond to any outbreak.”

“The whole of government is working closely together to tackle the spread of COVID-19,” UK Chancellor Rishi Sunak said in a statement.

We are well prepared for this global threat and, as the wider economic picture becomes clearer, we stand ready to announce further support where needed.”

The Department of Health and Social Care has launched a capital facility to support any urgent work NHS England needs for its coronavirus response, as well as 40 million pounds ($51 million) for vaccine development, Sunak said.

US Sen. Patty Murray of Washington, the ranking Democrat on the Senate health committee, said she is pushing to make sure the federal government reimburses state and local governments for costs incurred by testing people who may have the coronavirus.

They want such language to be included in the emergency spending bill.

“The biggest thing I hear at home now … is the lack of tests. … They are scrambling as fast as they can to urge the CDC to get more tests out. … They think they can do 100 a day right now – that’s not nearly enough," Murray said.

In a letter sent to employees, Dartmouth-Hitchcock Medical Center CEO and President Dr. Joanne M. Conroy said the person with a presumptive positive case of coronavirus in New Hampshire is an employee of the medical center.

"Out of an abundance of caution we have now identified all staff who may have had close contact with the individual who has tested positively for COVID-19," Conroy said.

We are in the process of communicating to those staff members that they must stay at home and be monitored in order to help prevent any additional risk of exposure."

Conroy's letter also said they know of no exposure to any patients in clinical areas.

"There is no on-going risk to patients," Conroy's letter read. "At present the hospital remains open and safe."

New Hampshire currently has only one case of coronavirus.

Texas Gov. Greg Abbott slammed the Centers for Disease Control and Prevention on Monday for releasing a woman who had tested negative twice for the coronavirus before a subsequent third test came back positive in San Antonio.

It appears to be a case of negligence with regard to allowing this person who had the coronavirus to leave the Texas Center for Infectious Disease and go back into the general population,” Abbott told reporters in Austin.

The woman was evacuated from Wuhan, China, to Lackland Air Force Base in San Antonio on a flight chartered by the US State Department. She was released from the Texas Center for Infectious Disease on Saturday, according to San Antonio Mayor Ron Nirenberg.

“Every possible action that can be taken is being undertaken to make sure that her exposure to anybody in San Antonio is minimized and limited,” Abbott said. “My office had been fully engaged making sure that CDC immediately implements course correction.”

There were people who were scheduled to leave Lackland on Monday, but Abbott said they won't be allowed to go home.

They will not be allowed to go until the CDC can guarantee that they have no trace of coronavirus and pose no threat to the expansion of the coronavirus anywhere in the country,” Abbott said.

There are 11 people who tested positive for coronavirus remaining at the center, Abbott said.

“All of these 11 people have what is considered to be very mild cases of the coronavirus," Abbot said. "None of them are serious."

"What the CDC must do is that they must improve their protocols and they must be absolutely certain that before they allow anybody to be released from any location in San Antonio, that they can assure the public that whoever they are releasing does not have the coronavirus,” Abbott said.

After updating the numbers of Americans who have coronavirus and those who have died from the disease, Vice President Mike Pence reiterated Monday that the risk to Americans remains low.

Pence, speaking from the White House briefing room, went on to discuss his meeting Monday with the nation’s governors as well as the meeting pharmaceutical companies.

Despite today's sad news, let's be clear: The risk to the American people of the coronavirus remains low, according to all of the experts that we are working with across the government," Pence said.

"This President has said we are ready for anything, but this is an all-hands-on-deck effort. Today's activity really reflects the President's effort to bring the best minds of private industry together, the best leadership from around the country at every level,” Pence said.

The 19 firefighters who showed symptoms of “having a serious exposure to a confirmed COVID-19 patient” in King County, Washington, have been moved to isolation, according to Doug Stern, president of the International Association of Fire Fighters.

The coronavirus supplemental funding request is not expected to be finalized by tonight, a White House official said, but could come as early as tomorrow.

House Speaker Nancy Pelosi sent a letter over the weekend demanding the coronavirus request contain “entirely new funding" after the White House’s initial request for a total of $2.5 billion last week involved moving half of that sum from existing funds and appropriating only $1.25 billion in fresh funding.

A second White House official said the supplemental funding currently under discussion will now be “new money” and not reprogrammed funds.

The supplemental funding is likely to be much larger than the amount the White House requested last week. Democrats, and even some Republicans, had questioned whether the administration asked for too little.

The topline number currently being discussed is more than $7 billion, although that number is not yet locked down.