Mongolian President Khaltmaagiin Battulga has been placed under a 14-day quarantine after a one-day visit to China.

According to state news agency Montsame, Battulga along with several other government officials, including the minister of foreign affairs, visited China to meet President Xi Jinping and Premier Li Keqiang.

The delegation -- including the President -- were immediately placed into a two-week quarantine upon their return to Mongolia on Thursday night as a precautionary measure.

Montsame also reported that Battulga met with Xi during his visit in which the two discussed joint efforts to curb the spread of the novel coronavirus. Battulga also announced a donation of 30,000 sheep to China.

Measures in Mongolia: Mongolia has not reported any cases of the coronavirus and has taken measures to stop it entering the country. Schools will be closed until the end of March and the delivery of coal to China is suspended until March 2.

A historic fall in US stocks on Thursday has caused shockwaves through Asia Pacific markets today, with drops in major exchanges across the region.

It followed a record drop in the United States. The Dow dropped 1,191 points on Thursday, in its worst one-day point drop in history, while the S&P 500 posted its worst day since 2011.

In general, stocks are on track for their worst week since the 2008 financial crisis. Markets are shaky amid fears that the coronavirus outbreak could turn into a global pandemic.

Economic pressures grow in China: The uncertainty is taking its toll on a growing number of businesses. Chinese search giant Baidu warned Friday that revenue could drop as much as 13% in the first quarter compared to the same time last year.

Revenue for the company's core business, which includes online marketing and advertising, could plunge as much as 18% year-over-year, according to the company's guidance.

Online marketing revenue in 2019 fell 5% compared to the year before.

The US Navy has ordered all ships that have visited countries in the Pacific region to effectively self-quarantine and remain at sea for 14 days in order to monitor sailors for any symptoms of coronavirus.

"Out of an abundance of caution, Pacific Fleet is implementing additional mitigations to prevent Sailors from contracting COVID-19, and to monitor Sailors who have traveled to higher-risk areas," US Navy spokesman Lt. James Adams told CNN, using the official name for the virus.

No evidence of cases: The spokesman said that "at this time, there are no indications that any US Navy personnel have contracted" the coronavirus but said the Navy was acting out of an abundance of caution.

Remain at sea: The commander of the US Navy's Pacific Fleet, Adm. John Aquilino, issued guidance instructing Navy vessels departing from countries in the region "to remain at sea for at least 14 days before pulling into another port, in order to monitor sailors for any symptoms of the virus."

Military drills cancelled: An upcoming military exercise with South Korea was suspended due to concerns about the virus.

Travel restrictions: The US military's Indo-Pacific Command, which oversees all US troops in the region, restricted all non-essential travel to South Korea for all US service members, contractors and defense department civilians serving as part of the command.

Military bases: On US military bases in Italy, access to on-base schools, child-care facilities, gyms and other public buildings has been temporarily halted and troops are bracing for the possibility of similar restrictions on other bases in Europe.

The novel coronavirus, a cousin of the severe acute respiratory syndrome (SARS) virus, has symptoms that include a runny nose, cough, sore throat, possibly a headache and maybe a fever, which can last for a couple of days.

For those with a weakened immune system, the elderly and the very young, there's a chance the virus could cause a lower, and much more serious, respiratory tract illness like a pneumonia or bronchitis. 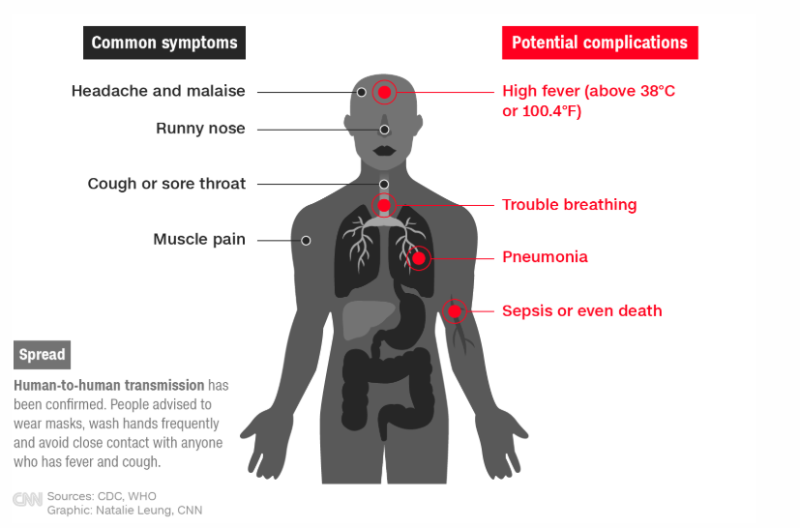 A new book published this week by China's Central Propaganda Department recounts how Beijing won the "people's war" against the novel coronavirus. With editions in more than six languages, it's clearly aimed at a global audience.

But while the claim that China has won the battle against the virus is debatable, even on the face of it, the lessons from China's own experiences aren't particularly applicable to other countries.

More than 780 million people across China were placed on effective lockdown at the height of the outbreak, while the government's giant security state swung into action, with intense, artificial-intelligence-powered surveillance used to track potential virus carriers across the country.

Beyond this, China also mobilized thousands of health care workers to tackle the outbreak in Wuhan, and constructed several hospitals dedicated to fighting the virus in a matter of days.

Not only do many countries lack the resources or technology to follow suit, they do not have the legal framework for doing so. This is for good reasons -- privacy protections, human rights safeguards -- but also means that other governments do not have the capabilities to rein in the virus that, if you take Beijing's propagandists at their word, were vital for the victory in China.

Even less draconian solutions, such as additional border checks, restrictions on travel, and calls for self-isolation or voluntary quarantine may be more difficult to pull off outside of China.

The Chinese authorities have complete control of the country's media and a massive censorship apparatus, allowing them to set the narrative and encourage compliance and a sense of the country pulling together. They also don't have to deal with opposition politicians criticizing their policies or seeking to score points.

Already in the US, the virus is becoming politicized, with both President Donald Trump and Fox News blaming Democrats and the media for overhyping dangers in a supposed desire to hurt his popularity.

China's response to the virus may have been successful, but like many things that happen in a country that unique, it will be difficult to copy overseas, for both good reasons and bad.

Customers are being met with temperature checks and even takeout only at popular eateries around China due to the outbreak.

For deliveries, orders are coming with little cards that include the name and temperature of the persons who made the food and delivered it.

Watch CNN New Day's report on the new normal for eating during the outbreak:

The first confirmed novel coronavirus case in Nigeria is an Italian citizen who traveled to Lagos, Nigeria’s Health Ministry said in a statement.

The individual works in Nigeria and had returned from Milan to Lagos on February 25, the ministry said.

The patient is clinically stable, with no serious symptoms, and is being managed at the Infectious Disease Hospital in Yaba, Lagos,” the ministry said.

Nigeria, Africa's largest country by population, is home to more than 200 million people.

Nigerian health officials have started working to identify everyone the patient came into contact with since they arrived in the country and have urged citizens not to panic.

“Citizens must not abuse social media and indulge in spreading misinformation that causes fear and panic,” the statement said.

Nigeria’s government has been strengthening measures “to ensure an outbreak in Nigeria is controlled and contained quickly,” according to the statement.

The country's first coronavirus case is also the first confirmed case of the virus in Sub-Saharan Africa.

Rock band ‘Green Day’ announced they are postponing their upcoming shows in Asia due to the coronavirus.

The following message was posted on their verified social media accounts:

Belarus has recorded its first case of novel coronavirus in the country, identifying the patient as a student from Iran, the Belarus Ministry of Health said today in a statement on its official website.

“During a laboratory test on February 27, the virus was detected in an Iranian citizen who arrived on a flight from Baku on February 22,” the statement says. "The patient and those who were in contact with him are quarantined in Minsk, the young man’s condition is satisfactory.”

The health ministry added that it began testing all travelers coming from South Korea, Iran, and Italy on February 20.