More than 2,000 people have died from coronavirus across the globe, according to the latest figures released Tuesday.

China’s National Health Commission (NHC) reported Tuesday that 136 more people died of coronavirus in mainland China, 132 of which occurred in the Hubei province.

The latest figures brings the total number of deaths in mainland China to 2,004, and the global death toll to 2,009. There have been five deaths reported outside of mainland China with one death in Hong Kong, Taiwan, Japan, the Philippines and France.

The global number of confirmed coronavirus cases now stands at 75,117, with the majority of cases in mainland China.

Since the start of the novel coronavirus outbreak in December, the disease has infected more than 70,000 people and has reached a death toll of 1,868 people in mainland China.

According to analysis done by CNN, travel restrictions, of varying degrees are still being enforced in various provinces and cities across mainland China including Hubei, Liaoning, Beijing and Shanghai affecting over 780 million people. These restrictions, which appear to be China's main effort to control the disease, include everything from self-quarantines to limits on who can come and go from neighborhoods.

Some of the strictest measures can be found in four cities in Hubei province, the epicenter of the outbreak:

Despite the continuation of its spread, Tedros Adhanom Ghebreyesus, director-general of the World Health Organization, said that the virus is not as deadly as SARS or MERS, both of which are related to the current coronavirus, and more than 80% of patients "have mild disease and will recover." Reports say it could take up to 18 months before a coronavirus vaccine is available.

Here's a look at where the cases are throughout mainland China, according to WHO data. These numbers may differ from those reported by Chinese health officials, who report updated totals at different times than the WHO. 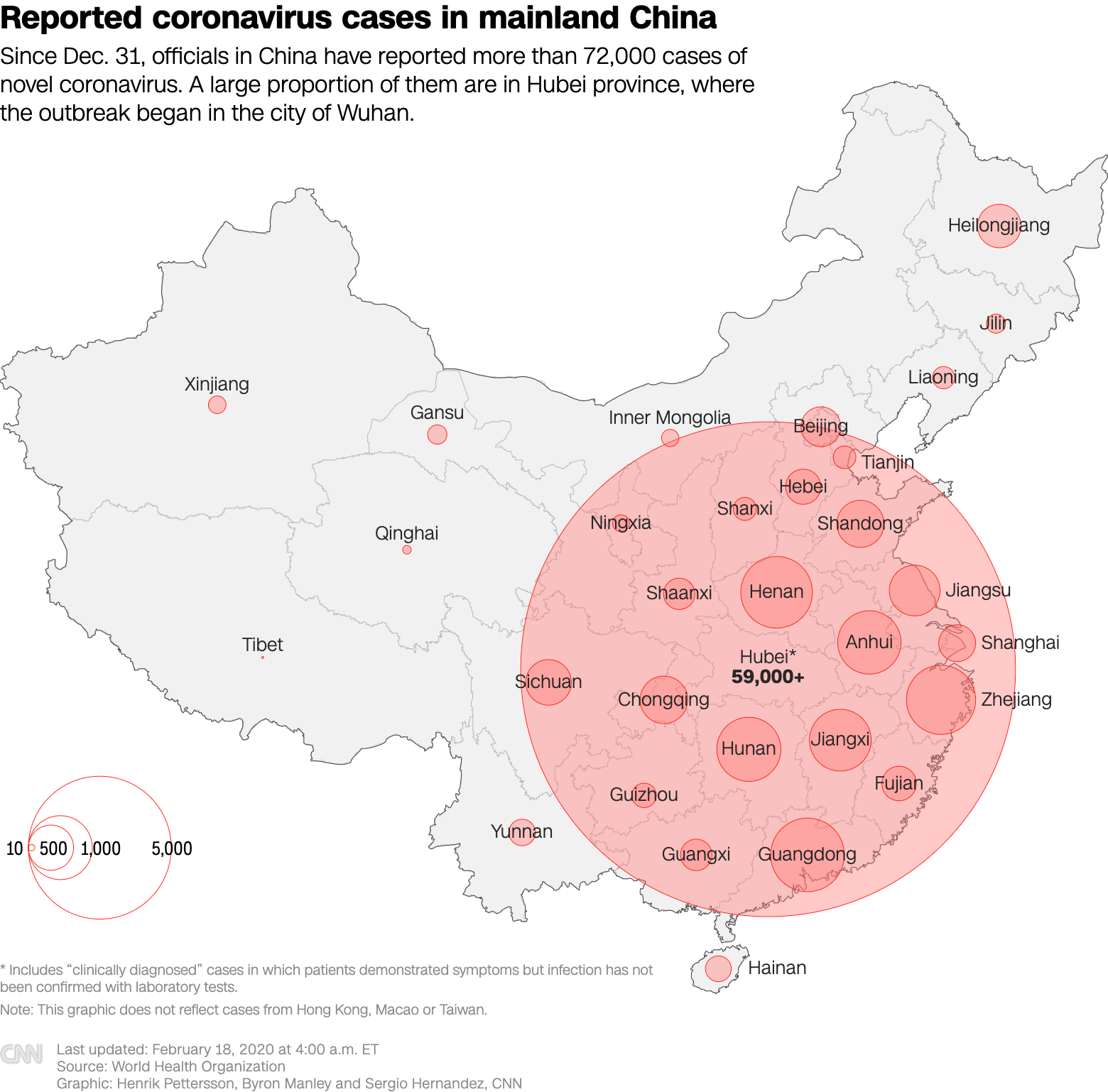 The US Centers for Disease Control and Prevention issued a statement criticizing the quarantine efforts taken on the Diamond Princess cruise ship.

“We commend the extraordinary efforts by the Government of Japan to institute quarantine measures onboard the Diamond Princess. While the quarantine potentially conferred a significant public health benefit in slowing transmission, CDC’s assessment is that it may not have been sufficient to prevent transmission among individuals on the ship. CDC believes the rate of new infections on board, especially among those without symptoms, represents an ongoing risk. Therefore, to protect the health of the American public, all passengers and crew of the ship have been placed under travel restrictions, preventing them from returning to the United States for at least 14 days after they had left the Diamond Princess," the CDC said in the statement.

The CDC noted that there are still more than 100 US citizens on board the ship or in hospitals in Japan. Due to their high-risk exposure, there is the potential for additional novel coronavirus cases to occur and the remaining passengers who disembark from the ship will be subject to a 14-day quarantine.

The 13 patients who arrived at the University of Nebraska Medical Center from the Diamond Princess cruise ship are receiving supportive care, Dr. Mark Rupp, chief of the hospital's Division of Infectious Diseases, told CNN.

“They're in the chicken soup stage right now, so they're really just getting supportive care,” Rupp said.

He also noted that while the mortality rate for the virus is being calculated at around 2%, he expects that number to eventually fall.

“I won't be surprised when this is all said and done to see mortality rate somewhere in the neighborhood of maybe point five or 1% rather than over 2%,” Rupp said.

The Russian government announced that it would temporarily suspend entry by Chinese citizens, according to an order posted on an official state website today.

The statement said Russia would bar entry through its state border to Chinese citizens entering for work, for private, educational and tourist purposes. The order says the processing of documents, registration and invitations to Chinese citizens to enter Russian territory for those reasons would cease temporarily from midnight Tuesday; the full ban takes effect Thursday.

Some background: This announcement comes amid concerns over the novel coronavirus. Russia is a major destination and transit point for Chinese tourists, and shares a lengthy land border with China. The new restrictions will not apply to transit passengers, Russian state news agency TASS said.

The Russian government has reported two cases of the coronavirus involving Chinese citizens in Russia and confirmed that a Russian woman was diagnosed with the virus on board the cruise ship Diamond Princess.

With a majority of some US medical supplies coming from or originating in China, coronavirus could hold "chilling implications" by hindering that pipeline, according to Robert P. Kadlec, assistant secretary for preparedness and response at the US Department of Health and Human Services.

About timing: The US might not see the impacts just yet because American buyers typically stock up before Chinese factories slow down during the Lunar New Year, Kadlec added.

"The distributors and suppliers feel like right now they're okay," he said at a briefing today held by the Council on Foreign Relations. "How this plays out longer term is still a matter of concern."

These concerns extend not just to pharmaceuticals but also to other materials like face masks, which are frequently manufactured in China. The US Centers for Disease Control and Prevention does not recommend the use of face masks for the general American public. By buying them up in large quantities, Kadlec warned that Americans might leave fewer for some people who really need them — namely, health care workers.

Kadlec said, "We probably need to change the way we do business in these areas because of the significant risks and vulnerabilities that are being highlighted by this event." He added that the solution requires a whole-government approach in cooperation with the private — "It's everybody."

Dr. Anthony Fauci, director of the National Institute of Allergy and Infectious Diseases, agreed, saying, "We can't see them crash. If they crash, we have a problem."

China has withdrawn from next month's Davis Cup playoffs in Romania because the men’s tennis team cannot travel due to the coronavirus outbreak, the International Tennis Federation (ITF) announced on Twitter today.

“The increased restrictions in response to the current Coronavirus outbreak have resulted in the China, P.R. team being unable to travel to this tie. Romania will advance to play in World Group I in September,” ITF said.

China was scheduled to play in Piatra Neamt, Romania, on March 6-7 in World Group I playoff. 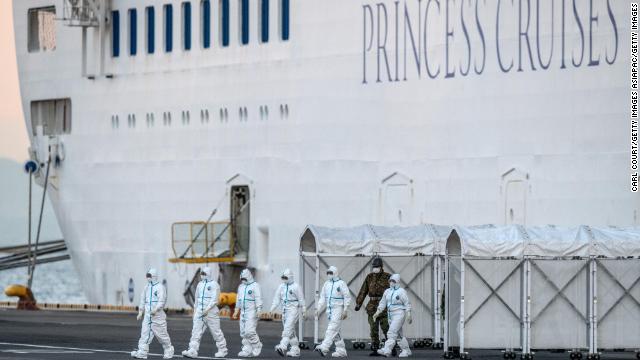 Passengers on the Diamond Princess cruise ship docked at Japan’s Yokohama port will finally begin to leave the ship starting tomorrow, the Japanese Minister of Health, Labour and Welfare said.

Some are expected to transition to shoreside facilities and others could board chartered flights for which they are eligible, according to the ship’s Captain Gennaro Arma.

These are the first passengers to leave the ship, not including those infected with coronavirus who are undergoing treatment on shore or the more than 300 Americans who were evacuated over the weekend and now in quarantine at two US bases.

Two groups of people who recently returned from Wuhan, China, have completed their 14-day quarantine at California bases, according to the US Centers for Disease Control and Prevention.

The CDC said in a statement that 180 people quarantined at Travis Air Force Base and 166 at Marine Corps Air Station Miramar have been "medically cleared," and their quarantine orders were lifted. One person from the Miramar group who was confirmed to have coronavirus remains hospitalized.

"It is important to know that people released from quarantine pose no health risk to the surrounding community, or to the communities they will be returning to," the CDC said in the statement.

Meanwhile, passengers from the Diamond Princess cruise ship who recently returned to the US are "being kept separate from those individuals who are already at Travis and nearing the end of their quarantine," the CDC said.