The US Centers for Disease Control and Prevention has listed 467 people under investigation for the novel coronavirus in 42 states, according to an update posted to the agency's website Monday.

Keep in mind: The latest count "does not include [people under investigation] in the US that were evacuated from the Diamond Princess cruise ship, including 14 presumptive-positive cases that are being retested,” the CDC says.

These numbers are cumulative since Jan. 21 and include people with travel history to China, as well as those who have been in close contact with confirmed cases or other people under investigation.

This is an increase from Friday, when the CDC listed 443 people under investigation in 42 states, including 15 positive, 347 negative and 81 pending cases.

“The real issue here is whether we’re seeing efficient community transmission outside of China. And at the present time, we’re not observing that. And as such, we’re not in a position to have that discussion. What we’re seeing is, again, as we’ve said previously, the majority of cases outside China have a direct link still back to China. And of that transmission that’s occurred in countries outside China, the majority of that transmission can be traced through existing transmission chains. So therefore I think we have to be very, very careful not to drive fear in the world right now, and be very cautious in using the words you have used. We’ve said that the risk is very high in China, it’s high regionally and it’s high around the world. That is not, ‘the risk is high of a pandemic.’ The risk is high that the disease may spread further, and I think at face value, that is true."

Dr. Sylvie Briand, director of WHO's Infectious Hazards Management Department, agreed, adding, “The difficulty with certain words is that their interpretation varies, and for [the] general public, very often ���pandemic’ is really the worst-case scenario. And so I think we need, before qualifying the event as the worst-case scenario, we need a lot more evidence and a lot more data. And so that’s why I think we need to be cautious, because it can really create panic unnecessarily.”

Recent data from around the world — and in particular from China — appear to show a decline in new cases. The World Health Organization says the new data must be analyzed "cautiously."

“This trend must be interpreted very cautiously. Trends can change as new populations are affected. It’s too early to tell if this reported decline will continue. Every scenario is still on the table,” Tedros Adhanom Ghebreyesus, director-general of WHO, said during a press conference today.

He added that the virus seems to be "not as deadly as other coronavirus including SARS and MERS."

“More than 80% of patients have mild disease and will recover. In about 14% of cases, the virus causes severe diseases including pneumonia and shortness of breath. And about 5% of patients have critical diseases including respiratory failure, septic shock and multiorgan failure. In 2% of reported cases, the virus is fatal, and the risk of death increases the older you are. We see relatively few cases among children. More research is needed to understand why,” Adhanom Ghebreyesus said.

Here's a look at the decline in cases, according to WHO data. These numbers may differ from those reported by national health authorities, who report updated totals at different times than the WHO. 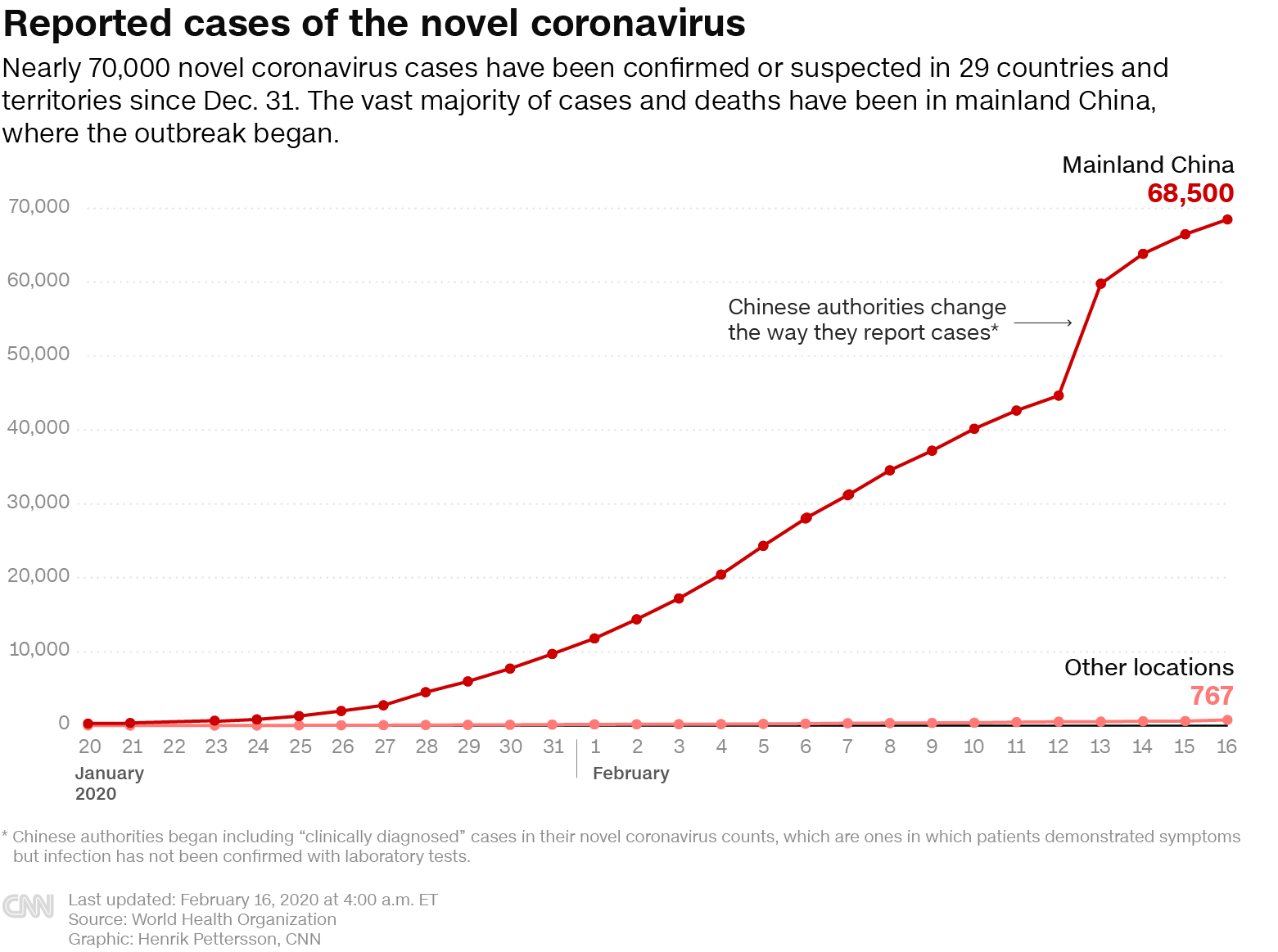 Two new cases of the novel coronavirus have been confirmed in Singapore, bringing the city-wide total to 77 confirmed cases, the Singapore Ministry of Health announced today.

One of the new cases in Singapore is a 76-year old man who was evacuated from Wuhan, China on Feb. 9. The other is 35-year-old man with no recent travel to China and is linked to a previous case.

Five people diagnosed with the coronavirus in Singapore were discharged from the hospital, bringing Singapore’s total of discharged patients to 24 people, the ministry said.

The first new case in in Taiwan is a woman in her 80’s and the second case is a man in his 30’s. Both are related to cases announced yesterday, the ministry said.

Five more people in Japan have tested positive for coronavirus, the Ministry of Health, Labour, and Welfare has announced.

The new patients are not on the Diamond Princess cruise ship.

That makes for 62 total cases not from the Diamond Princess, and 518 total in Japan.

While the vast majority of coronavirus cases are in mainland China, the virus has been reported in more than two dozen countries and territories around the world.

Here's a look at where the cases are throughout the world, according to World Health Organization data. These numbers may differ from those reported by national health authorities, who report updated totals at different times than the WHO. 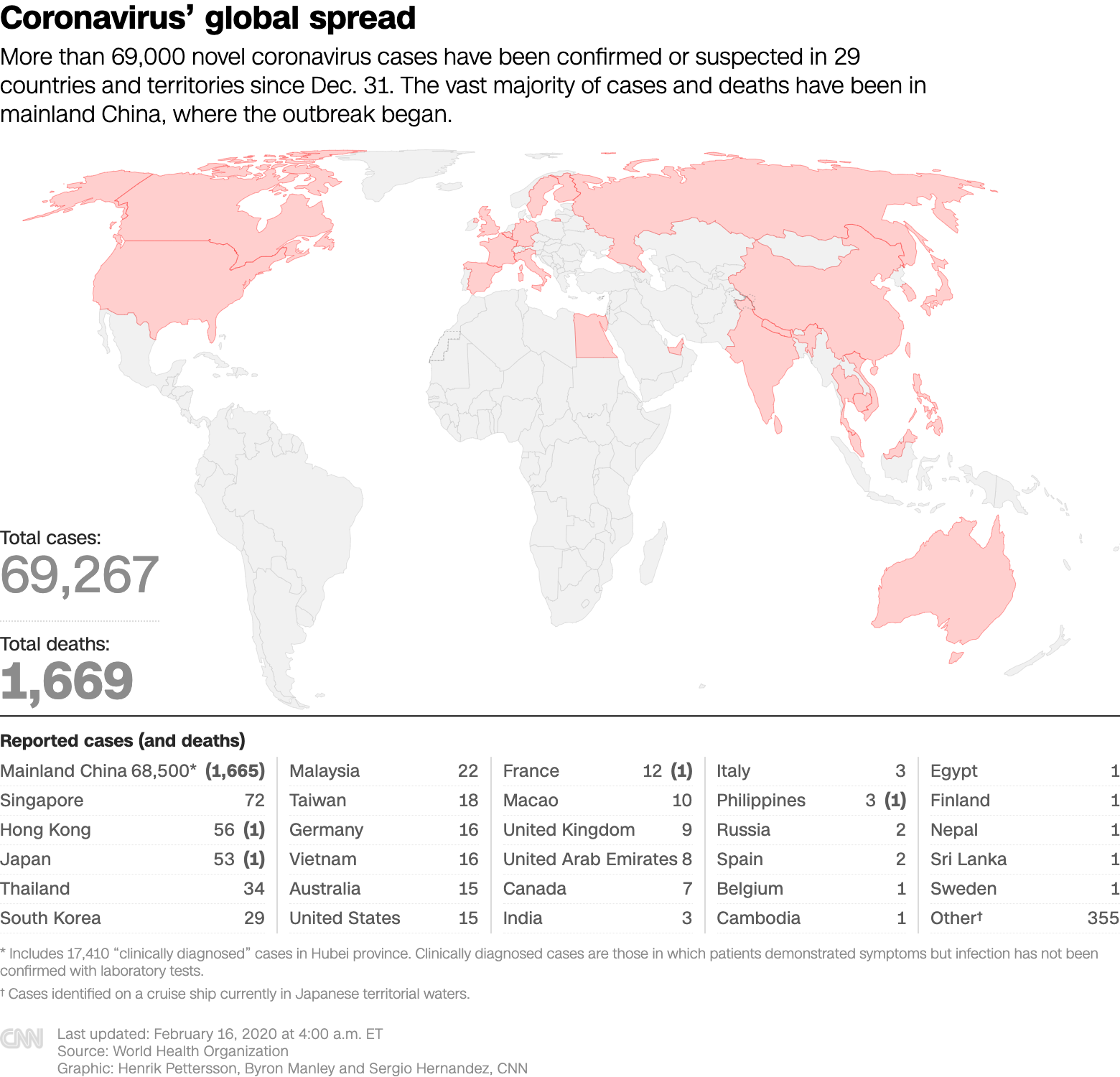 Nearly half of China's population — 780 million people — is living under some form of travel restrictions as authorities continue to contain the novel coronavirus outbreak.

According to analysis done by CNN, travel restrictions, of varying degrees are still being enforced in various provinces and cities across mainland China including Hubei, Liaoning, Beijing and Shanghai affecting over 780 million people. Restrictions include everything from self-quarantines to limits on who can come and go from neighborhoods.

Some of the strictest measures can be found in four cities in Hubei province, the epicenter of the outbreak. The cities of Wuhan, Huanggang, Shiyan and Xiaogan have completely sealed off all residential complexes and communities. The use of non-essential vehicles on local roadways is also banned. Residents in each city receive daily necessities from neighborhood and community committees as they are not permitted to leave their homes.

The novel coronavirus has infected at least 70,548 people and killed at least 1,770 people in mainland China alone by Feb. 16, according to China’s National Health Commission.

CORRECTION: This post has been updated to correct the death toll in mainland China as of Feb. 16.

UK authorities are considering repatriating 74 British nationals on board the Diamond Princess cruise ship, docked in the Japanese city of Yokohama, a spokesperson for the UK Foreign Office (FCO) told CNN.

We sympathize with all those caught up in this extremely difficult situation. We are urgently considering all options to guarantee the health and safety of the British people on board the Diamond Princess, in line with the latest advice from the Chief Medical Officer and the World Health Organisation, and are working closely with the Japanese authorities and our international partners," an FCO spokesperson said.

“Our staff in Tokyo, including the Ambassador, have been in regular contact with the British passengers and crew on the Diamond Princess and we have also been speaking to families in the UK,” the spokesperson added.

What the passengers are saying: In a Facebook live broadcast on Sunday, British passenger David Abel said that passengers aboard the ship were becoming "despondent" as other countries, including the US, started to evacuate their citizens.

“It feels that we have been forgotten. That you don’t really care about us, and that you’re actually not wanting us to come home,” he said, calling on the UK government to evacuate British nationals aboard the ship.

Passengers who flew back to the US from the Diamond Princess cruise ship told CNN about their journey from the stricken cruise ship, with passenger Karey Maniscalco saying: "I don't feel as much like a prisoner."

"Every single person we encountered was the most kind and thoughtful person," Maniscalco told CNN upon arrival in California.

Maniscalco told CNN that while officials knew they were scared, "they did everything in their power to make us feel at ease. They kept saying that they knew we've been through a great ordeal and how stressed out we were and now we are safe."

Speaking about her arrival in California, she told CNN:

It's a whole different feeling already. We are not locked in a rooms anymore. We have a separate room for a TV, I have normal cell service. I don't feel as much like as a prisoner."
"Thinking of two more weeks locked up like we were on the cruise was unbearable. This is doable!"

Passenger Sarah Arana told CNN that passengers were greeted by CDC officials as they left the plane. Once they arrived at the military base in California, passengers had their temperatures taken and were assigned rooms, she said.