Delivery robots are in high demand among retailers after many employees have not been able to return to work due to the novel coronavirus outbreak, according to Chinese state broadcaster CCTV.

"Orders are now about six times higher than they used to be. Our engineers have been working remotely, and we hope to start production next week and solve the current supply and demand problem," said Liu Zhiyong, the CEO of ZhenRobotics.

Robots are becoming an alternative for retailers as shops are shuttered, public facilities are closed and few people are wandering on the streets.

Here’s how China's companies are trying to get back to business amid the outbreak. 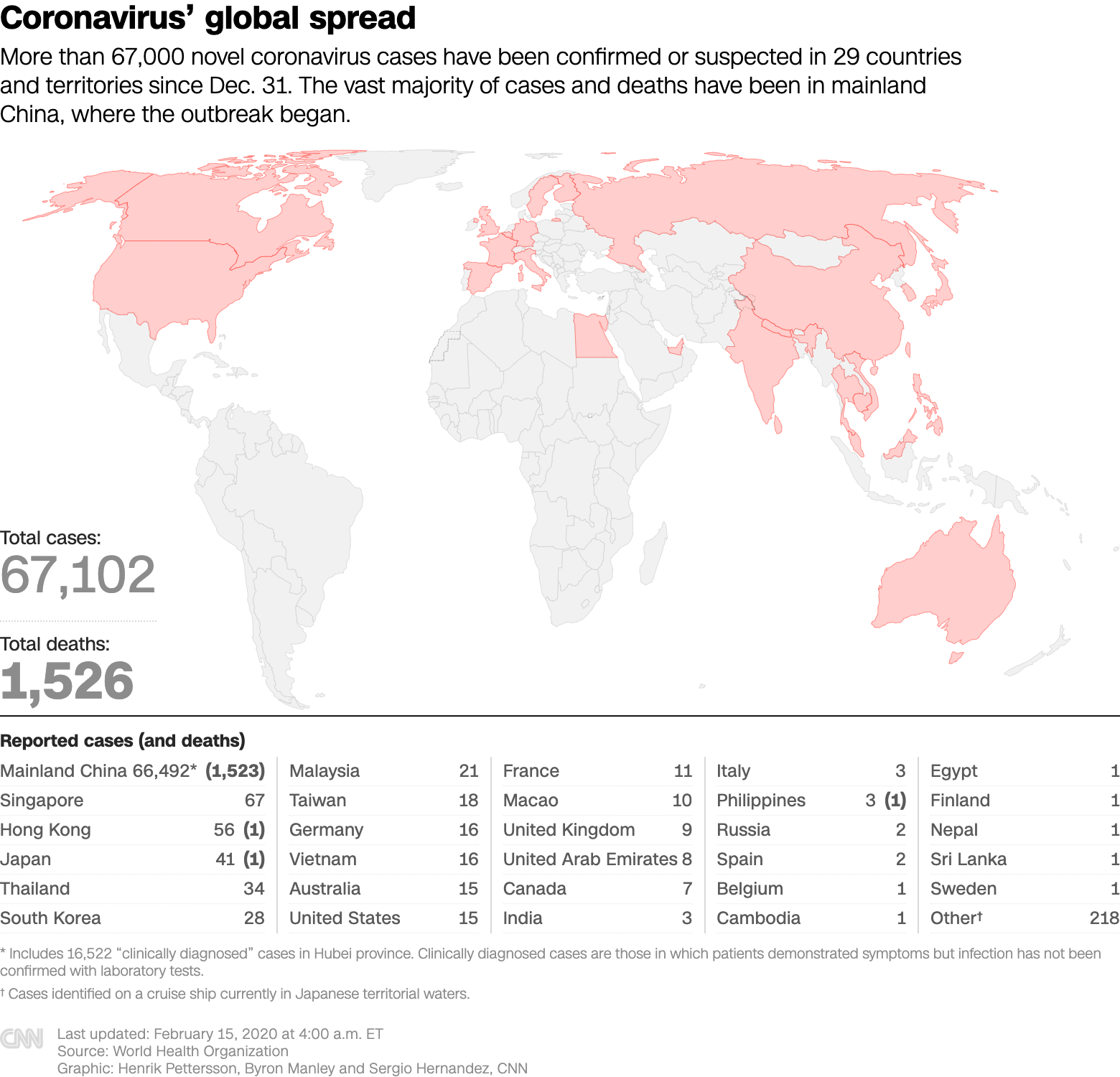 More than 66,000 cases of novel coronavirus have been reported in mainland China since Dec. 31. Here's a map showing where the confirmed cases are, according to data from the World Health Organization: 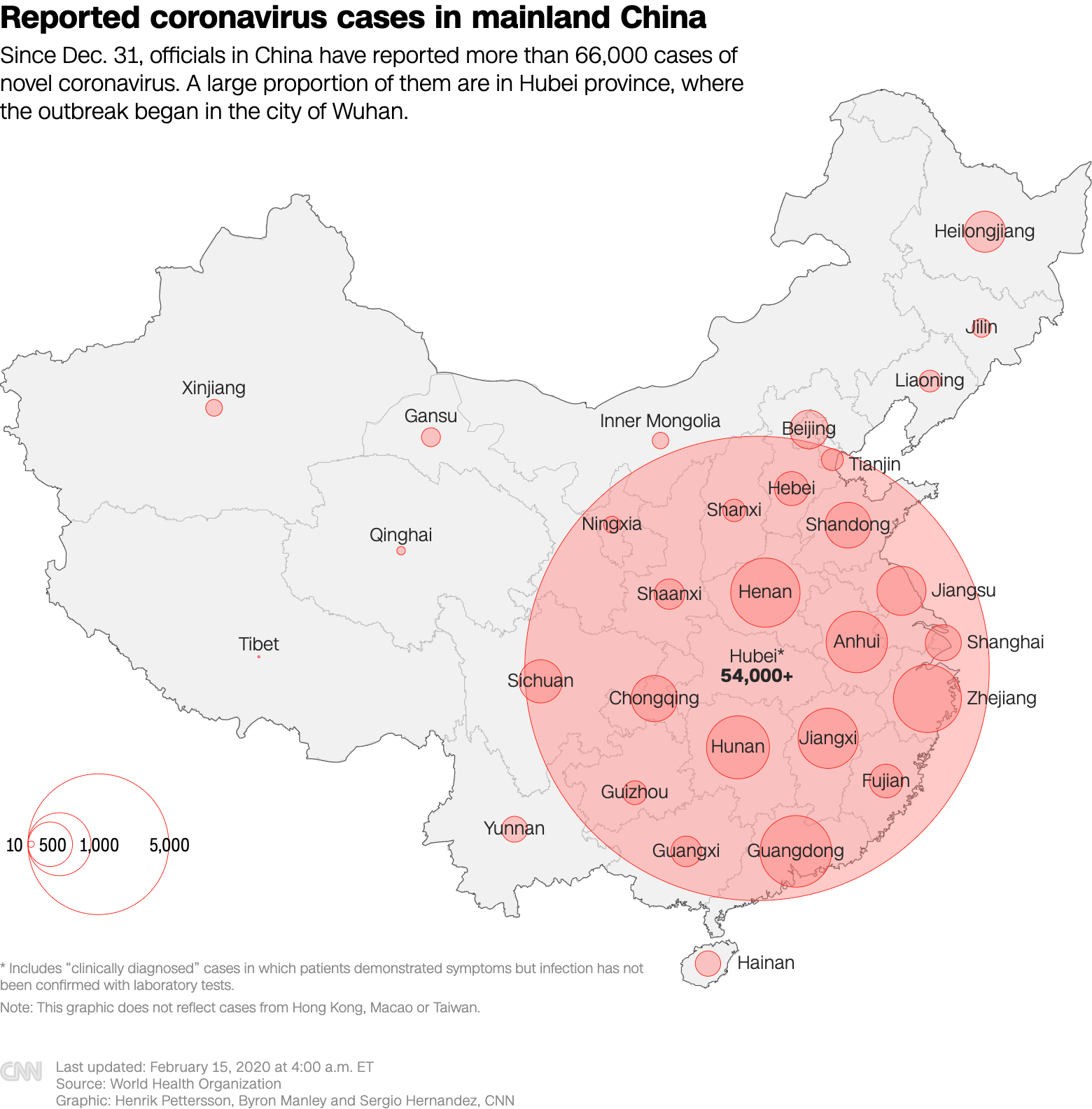 The first case of coronavirus involving the Westerdam cruise ship was confirmed by Malaysia on Saturday, after an 83-year-old US citizen tested positive, according to a report from state media Bernama.

Several Asian countries refused to let the Westerdam dock in their ports before being allowed to disembark in Cambodia on Friday. The cruise ship, which had a total of 1,455 guests and 802 crew onboard was not under quarantine, Holland America Line said last week.

All passengers and crew members onboard the cruise ship were allowed to return to their respective countries by the Cambodian government after they successfully passed through health screenings.

The US citizen and her husband, also American, were found to have symptoms as soon as they landed at the Kuala Lumpur International Airport from Cambodia, Bernama added. They were referred to the Sungai Buloh hospital for examination, which concluded that the woman tested positive while her husband, age 85, tested negative.

The husband is still undergoing treatment and observation at the hospital for his symptoms.

The total tally of confirmed cases in Malaysia is now up to 22, according to a report from state media Bernama.

CNN has reached out to the State Department for a comment.

US citizens aboard the Diamond Princess cruise ship docked in Japan will undergo extensive screening and a 14 day quarantine period should they choose to disembark.

On Saturday, US passengers received an email from the State Department urging them to leave the ship and return to the United States. There are currently some 400 US citizens aboard the Diamond Princess.

The State Department will provide chartered flights for those who choose to leave. Passengers choosing to fly back aboard the charter will be screened before they leave the ship and monitored by medical personnel during their return to the US, according to a news release from the US Centers for Disease Control and Prevention.

Once back in the country, passengers will undergo a 14 day quarantine period at either Travis Air Base in California or Joint Base San Antonio-Lackland in Texas. The passengers returning from Japan will be housed separately from those evacuated from China at the same bases.

An American couple from Oregon who traveled in the Diamond Princess cruise ship that's docked at the Daikoku Pier Cruise Terminal in Yokohama have had their hopes of coming home dashed.

Rebecca Frasure has tested positive for the virus, which means she can’t board a flight to the US and has to remain in quarantine at a nearby hospital.

Her husband Kent remains on the cruise ship and it's unclear what he will do.

Getting out: The US is sending charter planes to evacuate US citizens and their families Sunday evening local time. Those who choose to fly back on the planes will be quarantined for 14 days once they arrive.

The Japanese government said it “appreciates” the US decision to offer voluntary evacuation to American citizens and their immediate family on board the Diamond Princess cruise ship, the Ministry of Foreign Affairs said on Saturday.

Evacuation flights: The United States is sending charter planes to evacuate US citizens and their families Sunday evening local time. Those who choose to fly back on the evacuation planes will be quarantined for 14 days once they arrive.

These cases are in addition to the 67 reported earlier today from the Diamond Princess.