The Japanese government is considering testing all passengers aboard the Diamond Princess cruise ship, which remains docked under quarantine off the coast of Yokohama, regardless of whether they are symptomatic.

“We are aware that there are voices (saying) that all the passengers and crew members must get the test on the coronavirus when they disembark,” said Katsunobu Kato, Japanese minister of health, labor, and welfare.
“We are taking a close look whether we can conduct all the tests.”

So far, authorities have been prioritizing testing passengers and crew members who feel unwell. The ship was placed under quarantine on February 4 after a former passenger tested positive for the Wuhan coronavirus. The quarantine is scheduled to end on February 19.

A total of 70 people have tested positive for the Wuhan coronavirus on board the ship, which is carrying more than 3,700 people, including crew and passengers.

Hours after a state-imposed lockdown brought public transport in the Chinese city of Wuhan to a halt in late January, Wan Jiuxiong and his colleagues sprang into action.

The 27-year-old ride hailing driver joined a group of volunteers ferrying medical staff to and from overcrowded hospitals, where rows of feverish patients were fighting the coronavirus.

Wan's first assignment was to pick up a nurse from home and drive her to the Jinyintan Hospital, a key facility designated by the government to treat patients infected with the pneumonia-like illness.

Wan's passenger left in a hurry, without saying "goodbye" or "thank you", but Wan isn't looking for thanks.

"In this time of need, we Wuhan people have to save ourselves. Everyone has got to do their own part," he said.

Volunteers on the front lines: Hundreds of volunteers have formed a lifeline for the residents of Wuhan, the epicenter of the outbreak.

The lockdown suspended all buses and subways -- and though the government deployed taxis to help deliver supplies and transport patients, it's not enough.

To fill that gap, ordinary car owners like Wan have organized themselves into groups on WeChat, China's popular messaging app, where they swiftly respond to the requests of medics.

In addition to driving health care workers, some volunteer groups are delivering medical resources and supplies to hospitals. Others provide accommodation and hot meals to overworked doctors and nurses.

"It has been really difficult work for us volunteers. All we relied on is our hot blood," said Chen Hui, a 53-year-old volunteer. "Wuhan is sick, and we all want to cure it by pulling everyone's effort together."

Millions of people across China are heading back to work after the Lunar New Year break turned into an extended quarantine due to the coronavirus outbreak.

Many will be working from their homes, with strict quarantine guidelines in place in many cities and most businesses urging people to work remotely if possible to reduce the chances of transmission.

The outbreak shows no signs of slowing, with the number of confirmed cases now at over 40,000 worldwide and the death toll at 910.

The vast majority of the deaths have been in mainland China, leaving the country in something of a bizarre situation where some areas of it will be returning to something approaching business as usual, even as other regions face increasingly draconian restrictions on their movement and behavior in a desperate attempt to contain the virus.

They include attacking medical personnel, refusing medical checks and damaging or destroying property at medical facilities.

According to the statement, anyone who violates new virus control regulations will be quickly prosecuted and could face arrest, jail or even the death penalty.

Read more about the outbreak here. 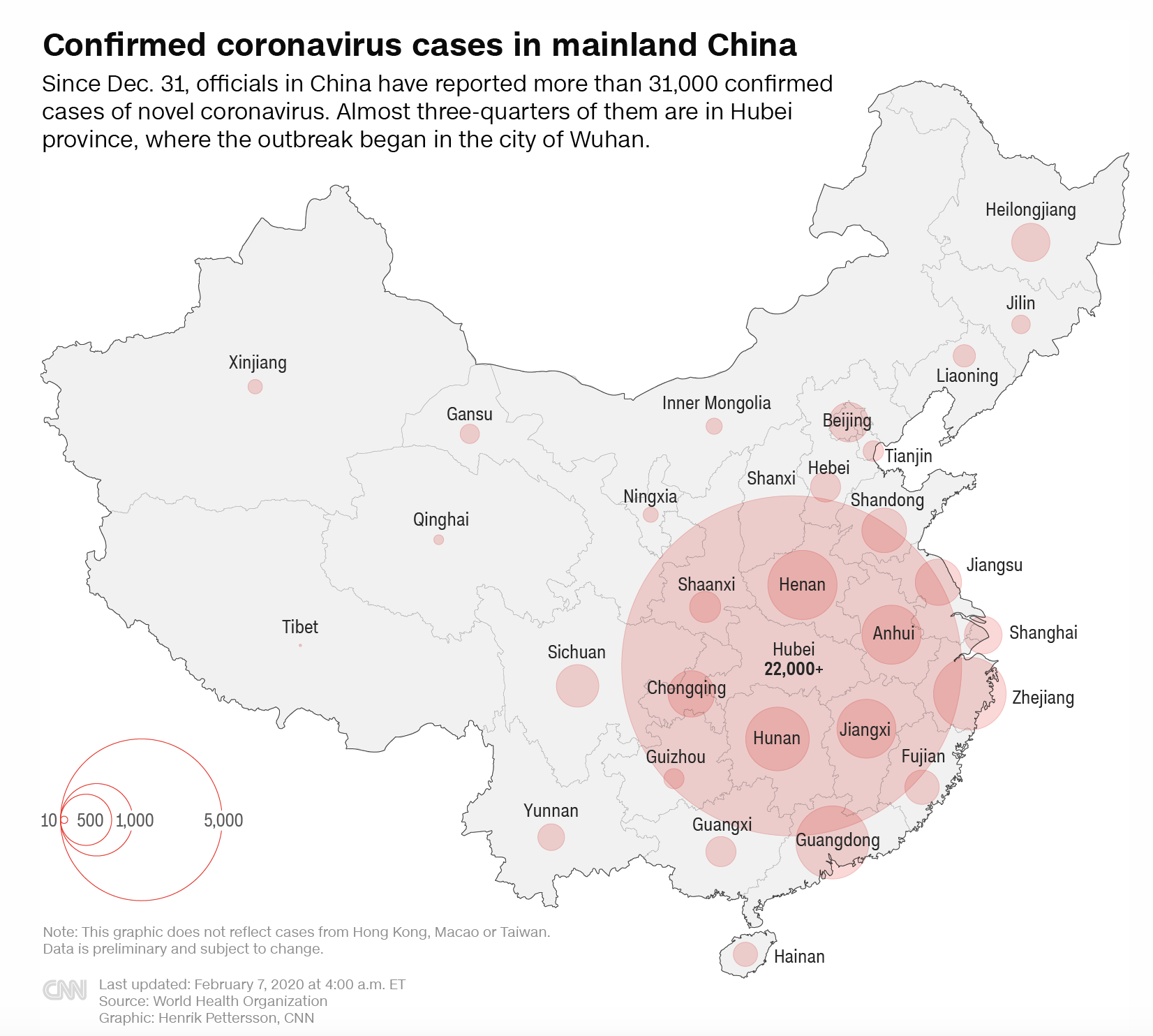 Editor's note: Michael Bociurkiw is a global affairs analyst and a former spokesman for the Organization for Security and Co-operation in Europe. The opinions expressed here are his own.

In their botched handling of the tragic death of Li Wenliang, the Chinese doctor who sounded the alarm on the Wuhan coronavirus, authorities in Beijing seem to want it both ways.

On the one hand, officials have expressed their sorrow over his death and encouraged people to tell the truth about the outbreak. On the other hand, government censors are hard at work scrubbing online posts that call for freedom of speech in the wake of Li's death.

When millions of people are denied the opportunity to grieve collectively over someone widely regarded as a hero, their trust in government can only further erode.

As Li recently told the Chinese magazine Caixin before his death, "I think a healthy society should not only have one kind of voice."

A tipping point for the public: While Li may not be immortalized to the same degree as the lone protester who faced off against a column of tanks in Tiananmen Square during the 1989 anti-government protests, his "normal guy" persona, and sense of duty has transformed him into an overnight hero -- and his death has unleashed an unprecedented tsunami of grief and anger that probably has not been seen since President Xi Jinping rose to power.

Authorities then botched rollout of the news of Li's death, announcing then retracting and announcing it again. And to many Chinese people, it was a tipping point, given that manipulation and suppression of information is what allowed the wide spread of the novel coronavirus in the first place.

More than 3,700 people are stuck in Yokohama, Japan, on a cruise ship that became a floating quarantine zone after dozens of people onboard tested positive for the coronavirus.

Among them is Spencer Fehrenbacher, an American citizen and masters degree student in Tianjin, China, who wanted to celebrate the Lunar New Year with his friends on the ship.

Now, he's confined to his cabin, spending his time reading and watching TV. Passengers in interior cabins are allowed out for about an hour and a half, but have to wear masks at all times and stay one meter away from each other, he said.

Then Fehrenbacher learned an additional 41 people were diagnosed with coronavirus. Eventually, 70 people total on the ship would test positive.

"It is beyond frightening news," Fehrenbacher said.

Newlyweds Milena Basso and Gaetano Cerullo are also on the ship. But instead of enjoying the honeymoon they'd saved up for over two years, they're worried about staying healthy and being trapped for longer than 14 days.

"We just don't feel like we're safe," Basso told CNN. "We should be quarantined in a sanitary environment that's safe, not on a cruise ship that's already infected."

"Donald Trump, save us," Basso said. "Get us a government-based airplane. Get us off the ship."

It has been three weeks since Wu Chen went into self-enforced quarantine in his Wuhan apartment, with only his cat, Baozi, for company.

Since January 13, the 26-year-old graphic designer has only ventured outside his apartment a few times, to stock up on supplies of food and protective face masks -- and to collect food for his cat.

He is one of millions of people who are all but confined to their homes in Wuhan and several other Chinese cities, under an unprecedented lockdown with no sign of ending.

Life under lockdown: Justin Steece, an American teacher in Wuhan, wears a face mask over his nose and mouth and sunglasses to protect his eyes when he goes out. He also puts on an extra layer of clothing, which is then washed once he gets back home.

At the supermarket, there is a small selection of food -- fresh produce is a rare find. Any shopping bags he uses are carefully wiped down with soap.

Killing time: As the weeks drag on, Chinese social media has been flooded with videos of citizens entertaining themselves by square dancing in their living rooms, or re-enacting Chinese operas.

Wu Chen has joined in, posting daily videos on Tik Tok. In one video, he plays hide and seek with his cat.

For most of last week, 7,300 people were quarantined at sea on two cruise ships docked in Japan and Hong Kong, after former passengers were confirmed to have the coronavirus.

One ship has been released from quarantine, and passengers allowed to disembark, while the other remains quarantined after more cases were confirmed on board. Here's what we know about the ships:

The coronavirus outbreak's cost to businesses worldwide is already readily apparent -- and auto plants could be among the first to feel the impact.

That's because of the massive size of the Chinese auto parts industry and the fact that you can't build a car with only 99% of its parts.

China is a major supplier of parts to auto plants around the world -- shipping nearly $35 billion of parts in 2018, according to United Nations data. While some of those parts go to auto parts retail stores, a large percentage of them go to assembly lines and are used to build cars.

But plants across China have been closed for weeks in response to the coronavirus outbreak -- and that could mean factories around the world grinding to a halt.

It only takes one missing part to stop a line," said Mike Dunne, a consultant to the auto industry in Asia and the former head of GM's operations in Indonesia.

Plants are closing across Asia: So far most of the auto assembly plants in China are closed; Volkswagen announced it was keeping its Chinese auto plants shut partly due to travel restrictions there and partly due to the lack of parts.

But it has already started to spread to plants elsewhere. Hyundai has shut its assembly plants in South Korea, not because the disease itself has spread there but because it can't keep the plants operating without Chinese parts. Last week, Fiat Chrysler said it has one European plant at risk from the lack of Chinese parts in the next two to four weeks.

Read more here about the hit to the auto industry.

New York City has already spent more than $1 million in their coronavirus response and “could spend millions of local dollars more over the next 60 days to help tackle the virus," according to a press release from New York Sen. Chuck Schumer.

In a press conference Sunday night local time, Schumer asked the federal government to reimburse the city for its use of local funds in fighting coronavirus.

"New York City has already spent more than a million dollars on public health activities of national importance to tackle the coronavirus, and could, if the need develops, be looking at a one-million-dollar-a-day tab," Schumer said.
“Tonight I’m asking the Feds, (Health and Human Services), to sign on the dotted line, just take the contract and sign it and say we will reimburse New York City for its costs. This administration should not be punishing New York by not giving us dollars.”

Preparations in New York: The funds have been distributed to the city's department of health, various hospitals, the New York Police Department, and other local agencies, said the press release. The funds also help source diagnostic tests and other laboratory equipment.

There have been no cases of the coronavirus in New York state yet. The 12 confirmed cases so far are spread across six states: Washington, Illinois, California, Arizona, Wisconsin, and Massachusetts.