The 3,600 passengers and crew members currently on the cruise ship World Dream, docked at Hong Kong's Kai Tak Cruise Terminal will continue to be held on board, health officials said Thursday.

"Before we complete the quarantine work all staff and passengers will have to remain on board," Chuang Shuk-kwan of the Department of Health said.

World Dream had docked at various different ports across China and Vietnam before arriving in Hong Kong. Dream Cruises has said it is attempting to contact passengers who had previously been on board the World Dream "to inform them of the situation and seek professional health assistance."

Three people from the United States are among 20 cases of the Wuhan coronavirus that have been confirmed in passengers on the Diamond Princess cruise ship quarantined off Japan, according to statements by the cruise company.

Their cases were identified through health screenings of all guests and crew by the Japanese Ministry of Health. They have been taken off the vessel and transported to local hospitals.

The Diamond Princess is anchored at Yokohama, near Tokyo, with 1,045 crew and 2,666 passengers on board -- including 428 Americans.

Officials are still waiting for the results of 171 tests.

China's ambassador to the UK has called the global reaction to the coronavirus epidemic an “overreaction” and criticized the media for a “bias” against China.

Speaking in London, Liu Xiaoming called for a “reasonable response” and accused people of “discrimination” in targeting the Chinese community.

Liu downplayed the outbreak by comparing it to the flu in the US, and said China is ”fully confident” in beating the virus, dismissing its negative effects on the country’s economy as “temporary.”

More than 7,300 people are being quarantined on two cruise ships off Hong Kong and Japan because of concerns that passengers and crew have been exposed to the Wuhan coronavirus.

One of the vessels -- the Diamond Princess -- is anchored off the coast of Yokohama, near Tokyo. It has 1,045 crew and 2,666 passengers -- including 428 Americans -- on board, and ended its planned 14-day itinerary early.

Japan's Health Ministry said that 20 people on board the cruise liner had been infected. Passengers on board will remain under quarantine for at least 14 days, "as required by the Ministry of Health," the cruise company said in a statement. 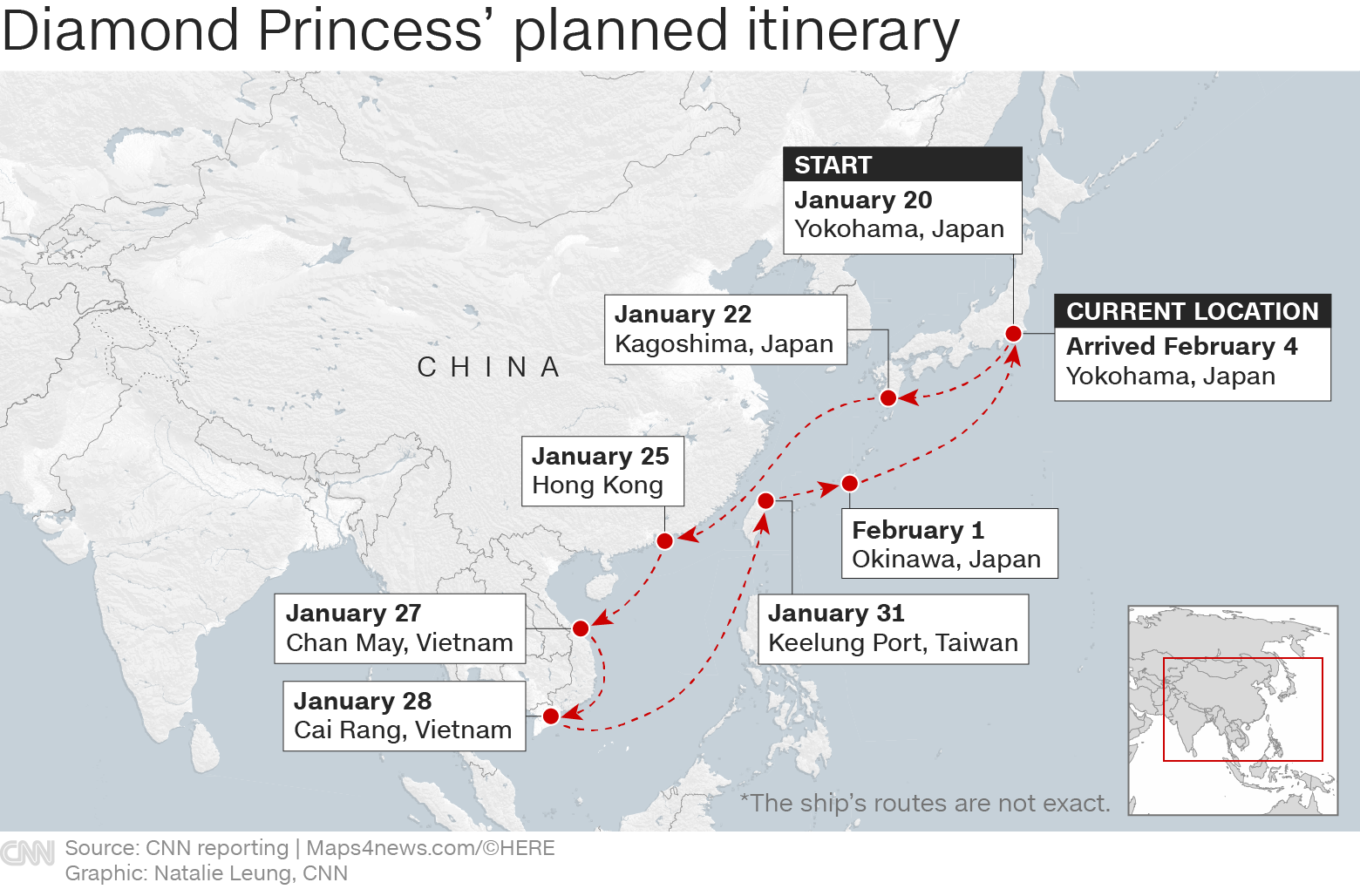 Two newborn babies in Wuhan, China, have been infected with the novel coronavirus, with the youngest baby diagnosed at just 30 hours old, according to Chinese state broadcaster CCTV.

The baby's mother was also infected with the virus, and CCTV suggested that "there may be mother-infant transmission,” where the mother passes the virus on to the baby in utero.

Without more details, however, it's impossible to know if the infants were infected in the womb. There are other ways they could have been exposed -- through handling by healthcare workers, mothers coughing, breastfeeding or even in the delivery process.

Here's a look at the numbers of confirmed cases and deaths, both within mainland China and globally.

Total confirmed cases globally: There have been 28,273 and 565 deaths.

Outside mainland China: 260 cases in more than 25 places, 2 deaths.

Airlines: At least 25 airlines have suspended or reduced flights to and from China, and at least nine countries are denying entry to travelers from China.

The Bill and Melinda Gates Foundation is dramatically increasing the amount it is spending to combat the coronavirus -- which has killed more than 560 people and infected over 28,000 -- pledging up to $100 million to help contain the outbreak.

The foundation said in a statement Wednesday that its funds would be used to help find a vaccine for the virus, limit its spread and improve the detection and treatment of patients.

Chinese officials lashed out today at a growing number of international airlines and countries for suspending flights to China, criticizing the measures as "neither cool-headed . nor rational."

Well over 20 airlines have suspended or reduced flights to and from China, including major American carriers like Delta, American Airlines, and United Airlines.

“I must stress that certain countries’ ill-advised decisions to suspend flights to and from China are neither cool-headed nor rational," said Chinese Foreign Ministry spokeswoman Hua Chunying.
"China is strongly concerned and dissatisfied. We hope relevant countries will bear in mind overall relations and people’s interests and resume normal operation of flights to guarantee normal people-to-people exchange and cooperation."

US sends supplies to China: Just a few days ago on Monday, Hua criticized the US for implementing travel restrictions and emergency measures while not providing any assistance to fighting the virus.

Yesterday, China confirmed that it had received supplies from the US. Today, Hua thanked the international community for its support, "including American companies, institutions, organizations and individuals."

Dutch airline KLM has temporarily suspended all flights to mainland China as a result of the coronavirus outbreak.

The airline plans to resume flights to Beijing and Shanghai on March 16 on alternate days, with a connection from Amsterdam to mainland China.

KLM’s daily flights to Beijing and Shanghai are to resume March 29, but for the time being, services to Chengdu, Hangzhou and Xiamen will remain suspended up to and including 28 March.

Air France has also extended its suspension to Shanghai and Beijing -- which started at the end of January -- until March 15.

Air France said in a statement it plans to alternate one daily flight to both cities with KLM “depending on the evolution of the situation.” It plans to resume a normal flight schedule, including to and from Wuhan, from March 29.

China announced on Thursday that it will halve additional tariffs on $75 billion worth of US imports, as the world's two largest economies continue to step back from a years-long trade war that has hurt both countries and dented global growth.

The move comes as China is grappling with the escalating coronavirus outbreak. The disease has killed 565 people, mostly in China, and infected more than 28,000 people in over 25 countries and territories.

The reduction affects US goods that China imposed tariffs on last September. Starting next week, China will cut the additional 10% tariff rate it enacted back then on some goods to 5%. Other goods that were taxed an extra 5% will now be levied 2.5%, according to a statement from China's State Council Tariff Commission.