Our live coverage of the Party Congress' closing ceremony has ended. Read more of our coverage here:

China’s top leader Xi Jinping is set to begin a norm-breaking third term with an even greater concentration of power, after retiring key party leaders from the top ruling body to make room for his own allies.

The week-long Communist Party Congress concluded Saturday with the ushering in of a new Central Committee – the party’s 200-member central leadership – which will in turn select a new slate of top leaders on Sunday.

Premier Li Keqiang and Wang Yang – neither of whom is perceived to be close to Xi – are not included in the new Central Committee, meaning they have left China’s top ruling body and will go into full retirement.

China's top leader: Xi is widely expected to be appointed the party’s general secretary for another five years on Sunday, paving the way for potential lifelong rule. At 69, he has exceeded the informal retirement age of 68 for senior party leaders. Xi’s name is included in the list of new Central Committee members.

Li and Wang are both 67 and eligible to serve another five years on the party’s supreme Politburo Standing Committee under retirement norms. Instead, they are retiring early from the party’s apex of power, in a break with precedents in recent decades.

Li is required to step down in March as premier by the country’s constitution, which only allows the premier to serve two terms. Wang, who heads the Chinese People’s Political Consultative Conference, was previously seen by some as a potential successor to Li.

Their surprised departure opens two more spots on the Standing Committee for Xi to fill with his own allies and proteges. Two other members on the body are past retirement age and set to step down.

Stacked with allies: A standing committee line-up that fills the body with Xi loyalists would “change the power sharing arrangement that China has seen since the late 1970s,” according to Victor Shih, an expert on elite Chinese politics at the University of California San Diego.

“Informally, Xi Jinping’s powers are (already) extremely high. He restructured the military, cleansed the security apparatus of other influence, but formally speaking in the Politburo Standing Committee, even right now, there is a balance of power, where officials historically unaffiliated with him, still held seats – that may come to an end,” said Shih, adding such an outcome could create an “unhealthy dynamic” where Xi is surround by people unused to giving critical policy feedback. 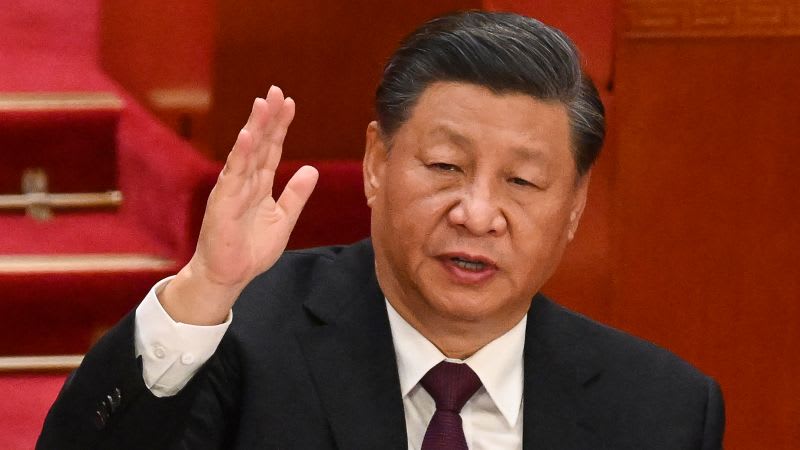 With the Party Congress now wrapped — and Premier Li Keqiang set to retire, tilting the balance of power in Xi Jinping's favor — observers are now waiting for the Standing Committee lineup to be revealed on Sunday.

The members chosen could indicate the state of Xi's influence within the Party. If he's able to stack the Standing Committee — which is currently made up of seven men — with allies and loyalists, that could signify even fewer checks on his power; alternatively, a more diverse Standing Committee could suggest Xi has made concessions to other power players or factions.

The Standing Committee selection could also reveal whether a potential successor is in the midst -- giving a clue into how long Xi intends to rule.

Here are some of top contenders for the Standing Committee selection:

Saturday saw the end of the week-long Party Congress, a twice-a-decade leadership reshuffle and meeting of the Communist Party's top leaders.

Here are key moments and takeaways from today:

With the 20th Party Congress now closed and the new members of the elite Central Committee ushered in, all eyes are turning to a reveal of the Party's top leadership on Sunday.

The new members of the party's Politburo Standing Committee, China's most powerful decision-making body, will make their first appearance in the Great Hall of the People in a moment expected to confirm Xi's likely step into a norm-breaking third term and cement his place as China's most powerful leader in decades.

Which party members follow Xi into the hall as new committee members will reveal much about the extent of his sway within the opaque inner-working of elite party politics -- and could provide clues as to whether he sees his rule extending past three terms.

Here's what to watch:

Open seats. In recent years the standing committee has included seven members, who typically step down in accordance with an unofficial retirement age that sees those 68 and above at the time of the Congress retiring. This year however, two additional members, 67 year-old Li Keqiang and Wang Yang, will also step down -- making room for a sweeping reshuffle that will see four new seats filled.

Allies and proteges. One strong indicator of Xi's power will be the extent to which he is able to fill those open seats with party members in his sphere. Several proteges and allies of Xi have been flagged by watchers of elite Chinese politics as likely candidates for promotion. Those include Chongqing party chief Chen Min'er, 62, Ding Xuexiang, 60, who runs the General Office of the Communist Party, and Shanghai party chief Li Qiang, 63.

Potential successor. Experts will be watching whether there will be a young face -- and potential successor -- in the standing committee, which could signal whether or not Xi is aiming for a fourth term. The lack of a successor among the line-up at the last Party Congress in 2017 served as a strong signal that Xi was planning to break with recent precedent and claim a third term -- a long-calculated move expected to come to fruition tomorrow.

Selection process. While the new committee members and the larger 25-member Politburo of which it is a part, will be formally rubber-stamped by the party's newly formed Central Committee, the real decisions over who fills the Party's top spots are believed to be made in the months prior to this week's events in closed-door discussions between top party leaders.

When Chinese leader Xi Jinping came to power in 2012, he unveiled a sweeping vision for the “great rejuvenation” of the country — a "dream” that would make China powerful and prosperous.

Ten years later, Xi has transformed China. He has consolidated the country as a force on the world stage, with an expansive economic footprint, a modernizing military and rising technological prowess.

But China has also become an increasingly restrictive place for its citizens, with swift suppression of dissent, pervasive surveillance and mounting social controls, which have only grown more pronounced under Xi’s costly and isolating zero-Covid policy.

With the Chinese Communist Party in the midst of its five-yearly leadership reshuffle, CNN took a look back at a decade of dramatic change for China that has set the stage for the country’s next chapter, as Xi — its most powerful leader in decades — steps into an expected norm-breaking third term.

The Communist Party Congress has wrapped up after a week of closed-door meetings in Beijing.

The Great Hall of the People — where delegates gathered today to unveil the newly appointed Central Committee, the party's main leadership body — has now emptied, though journalists remain in the venue, poring over documents and huddled over laptops.

The newly-appointed Central Committee, the party's principle leadership body comprised of 205 members, is dominated by men — as has been the case across most of China's leadership for years.

Only 11 members of the Central Committee are women, or around 5% of the total, according to the full list announced earlier today.

Of the nearly 2,300 delegates in the Party Congress — who range from provincial officials to grassroots representatives like farmers — just over a quarter are women, according to figures released ahead of this year’s Congress.

Then there's the elite 25-member Politburo, currently with only one female member — and its Standing Committee, China's most powerful decision-making body, typically composed of five to nine men.

The People’s Republic of China has never had a female leader, nor have any women served on the Standing Committee, since the party came to power in 1949.

Although China’s constitution enshrines gender equality, discrimination remains widespread, according to analysts — who point to cultural challenges and discriminatory policies such as female public servants being required to retire 10 years earlier than men. 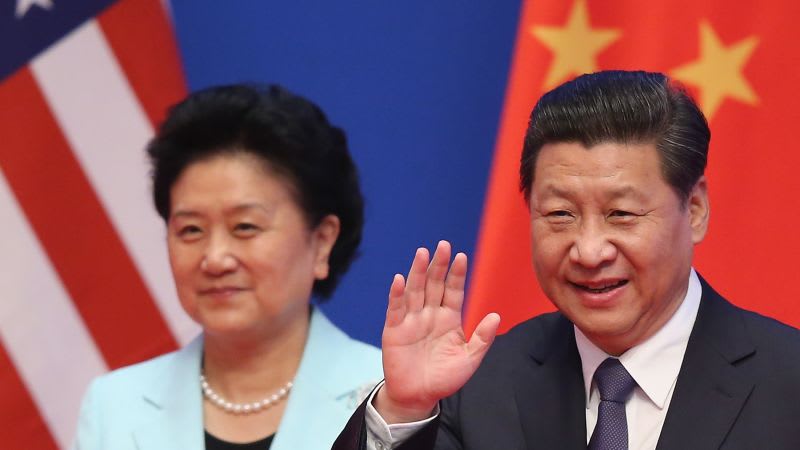 Why China has so few female leaders | CNN

Chinese Premier Li Keqiang, the highest-ranking Communist Party official after Xi Jinping, is not in the list of the Chinese Communist Party’s principal leadership, the 205-member Central Committee — which means Li is set to retire from the party role.

Li, 67, is one year short of the unofficial retirement age for senior Chinese Communist Party leaders.

Wang Yang, the fourth-highest ranking official and widely seen as a potential candidate for the next Premier, is not in the Central Committee either. He is also 67 years old.

The 25-member Politburo and its Standing Committee – China’s most powerful decision-making body – are drawn from the Central Committee.

Li's retirement comes a day before Xi is expected to take on a third term and preside over the announcement of the party's elite decision-making body — which analysts this year expect to be stacked with Xi loyalists.

Analysts had previously noted that Li's retirement would signal a significant shift in the balance of power in favor of Xi.

“The biggest thing to watch is whether people who are closely associated with Xi Jinping himself will dominate the Politburo Standing Committee, or whether some of the old guards whose careers are not completely dependent on him will stay … people like Li Keqiang and Wang Yang," said Victor Shih, an expert on elite Chinese politics at the University of California San Diego.

If the committee is full of Xi's allies, “that will change the power sharing arrangement that China has seen since the late 1970s," he added.