In a forceful speech from the spot where Mao Zedong declared the founding of the People's Republic of China, President Xi Jinping emphasized the country's historic achievements and contemporary strength.

Xi's address was big on broad nationalist strokes, playing into the longterm Communist Party narrative of lifting China from the "century of humiliation" it suffered under the Qing Dynasty, amid invasion by colonial powers including the United Kingdom and Japan.

The founding of the PRC, Xi said marked the end of the "humiliation and misery the country had suffered."

While he emphasized "peace and cooperation," Xi also hinted at two key issues that could spark future conflict: Hong Kong and Taiwan.

Hong Kong has been torn apart by violent protests for three months, and protests are expected to continue today, marring the celebrations in Beijing. Fears of a military crackdown in the semi-autonomous Chinese city have so far proven unfounded, but there is fear that following the National Day celebrations -- the most important date on China's calendar all year -- the government may feel it has a wider hand to intervene.

In his speech, Xi promised to "unite the whole country." The major outstanding issue in this regard is the self-ruled, democratic island of Taiwan, officially the Republic of China.

Separate since the end of the Chinese civil war in 1949, Taiwan has been under increasing pressure -- both diplomatic and military -- from China under Xi. As the island moves further away from China culturally and politically, with growing support for full independence, Beijing has increasingly threatened to take it by force if necessary.

Taiwan was once a Japanese colony, and both the island and Hong Kong fit into the century of humiliation narrative -- to truly achieve "national rejuvenation," China will have to unify both with the People's Republic. 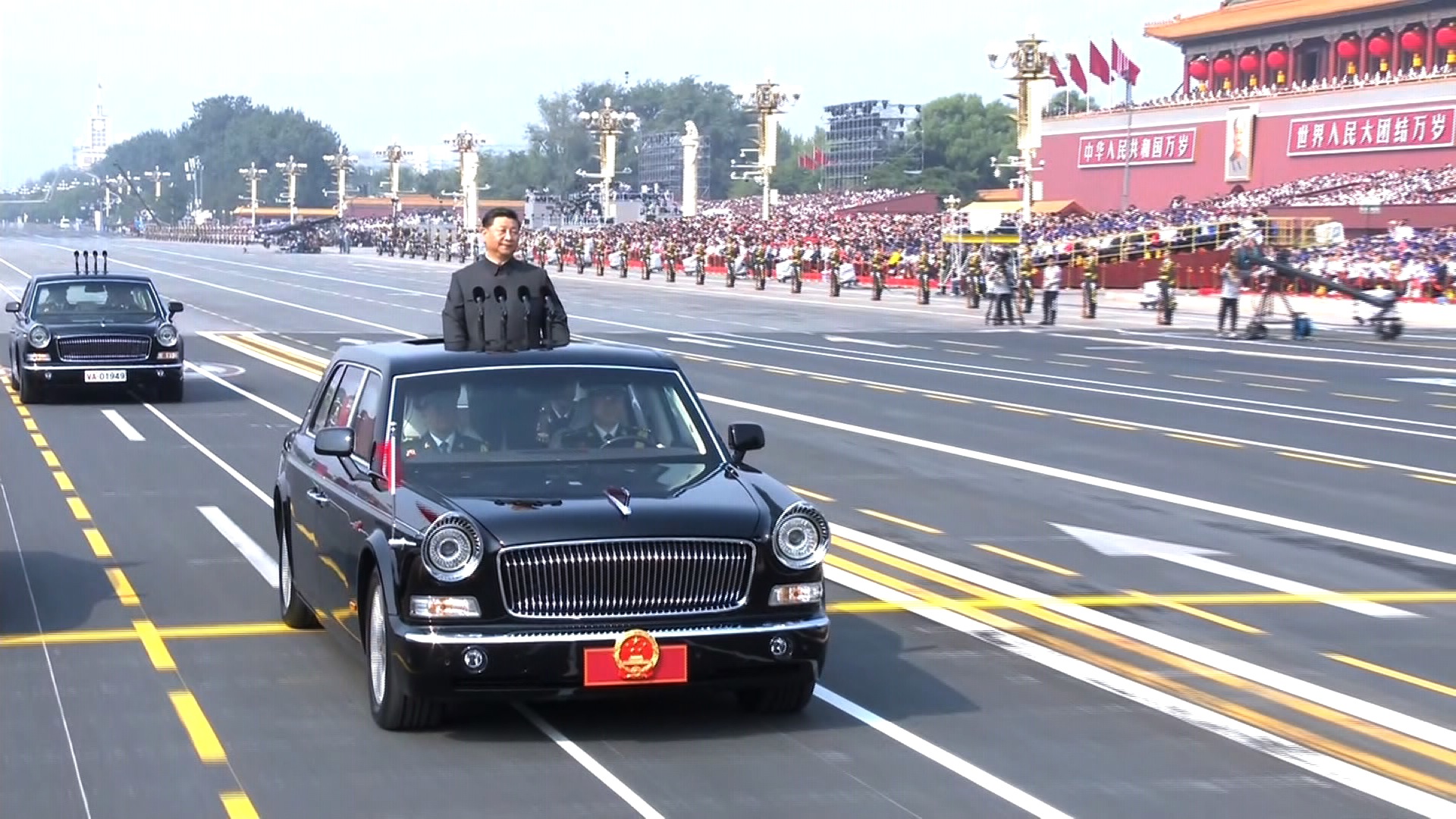 Xi is smiling as the limousine slowly makes its way down the road, past endless rows of uniformed men and tanks. He occasionally calls out "tongzhimen hao" (Greetings, Comrades!) to the various assembled troop units. Then he shouts "Tongzhimen xinkule" (Comrades, you've worked hard) to which they all respond in a chant in unison. 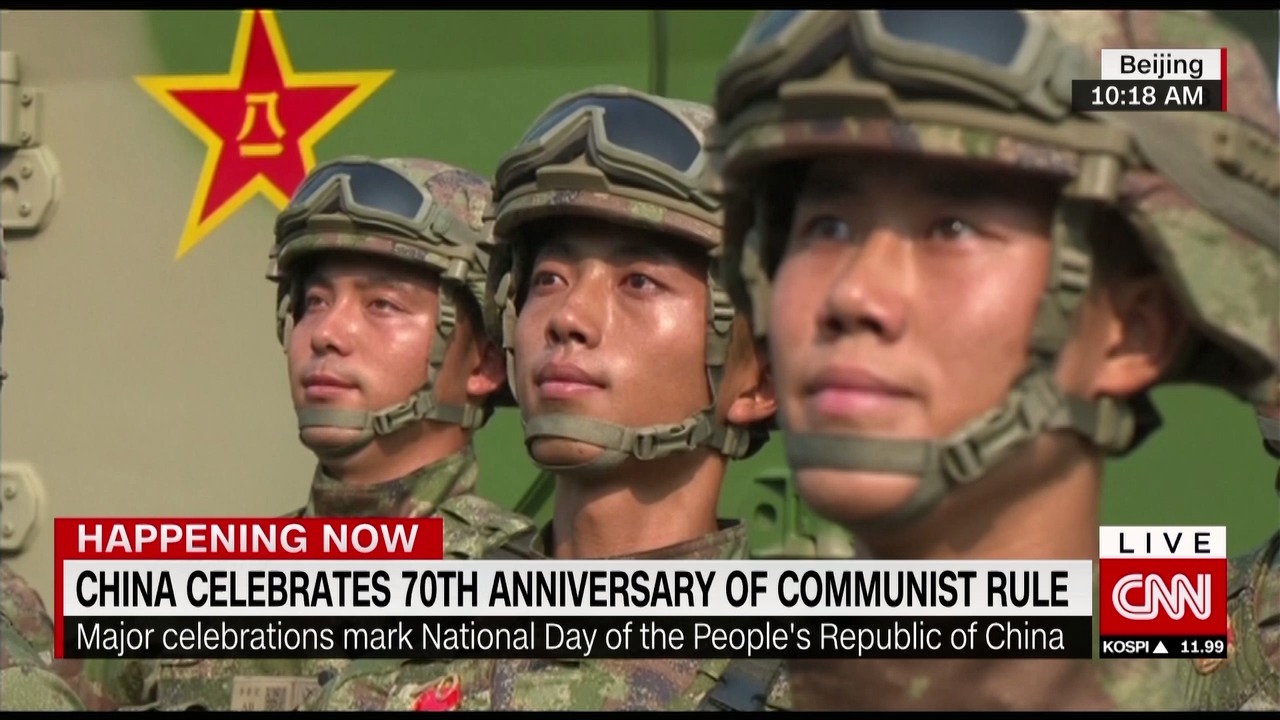 President Xi Jinping has just concluded his speech in Beijing's Tiananmen Square, marking the start of the military parade.

All eyes are on the parade today -- friends and rivals alike worldwide will be watching for any new weaponry that may be revealed in a show of strength and military might. 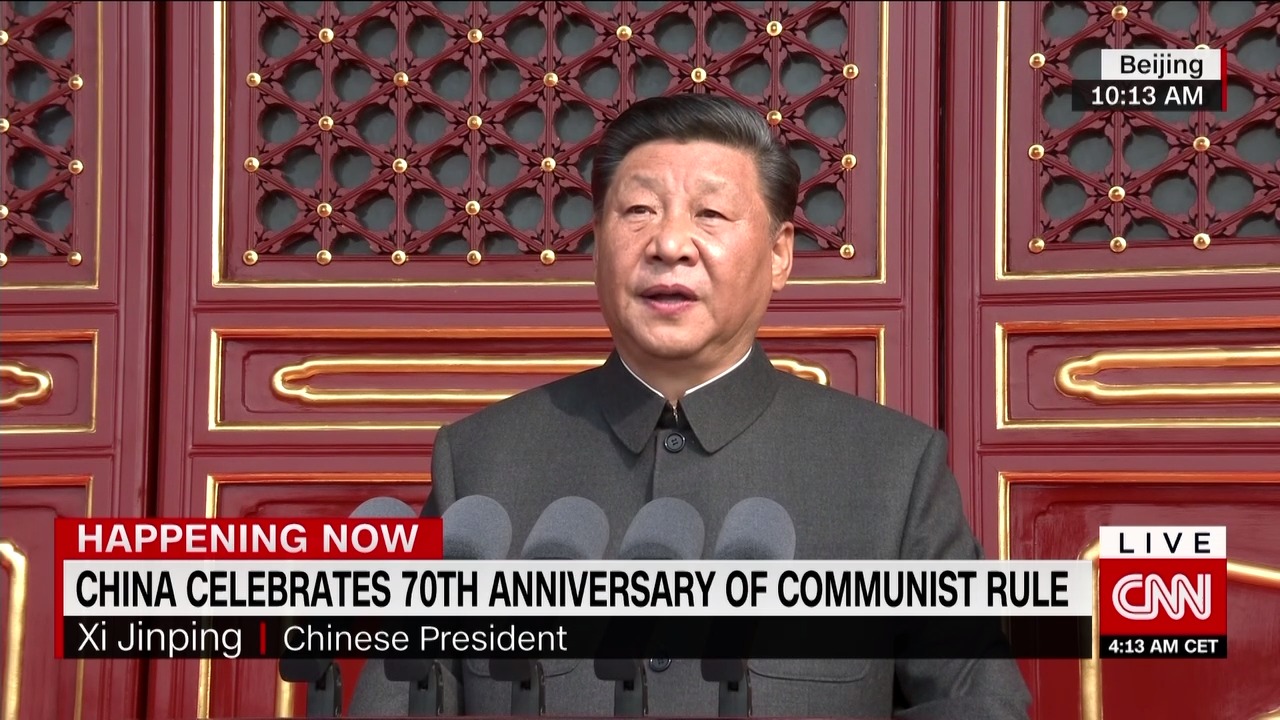 "We must remain committed to the strategy of peaceful reunification and One Country, Two Systems," said Xi, referring to the system of governance that gives Hong Kong its unique rights and semi-autonomy.

"We will maintain long term prosperity and stability of Hong Kong and Macau, advance the peaceful development of cross-strait relations, unite the whole country, and continue to strive toward the complete unification of our country."

Hong Kong has been protesting for 17 straight weeks now, and shows no signs of stopping. There are protests scheduled for six different districts today alone.

"It was today, 70 years ago, that Chairman Mao stood at this very place and announced solemnly to the world, the founding of the People's Republic of China, which marks the end of more than 100 years of humiliation and misery that the country had suffered since modern times," said President Xi Jinping in his opening National Day address in Beijing's Tiananmen Square.

"The Chinese people managed to stand up on their feet and embark on a great journey of national rejuvenation."

"Today a socialist China is standing in front the world and there is no force that can shake the foundation of this great nation. 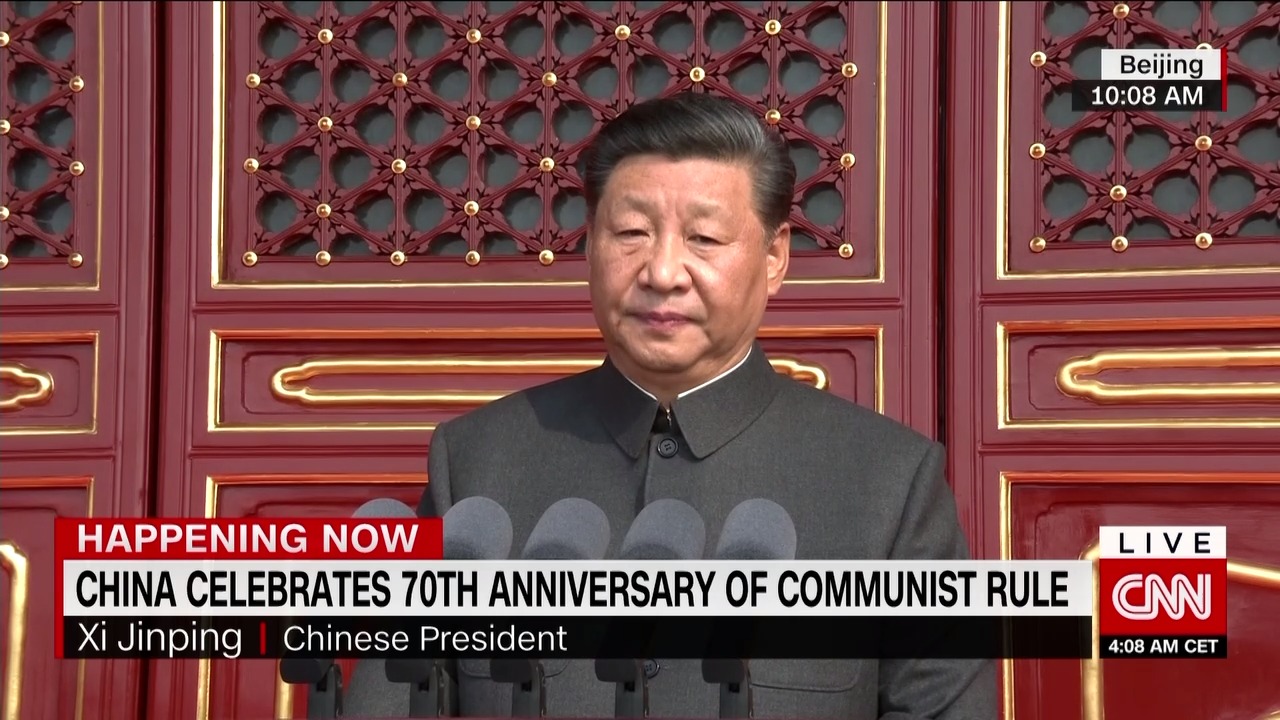 "My fellow countryman, comrades, friends -- today we are gathered here to celebrate the 75th anniversary of the founding of the People's Republic of China," he began.

"At this moment people of all ethnic groups, and Chinese men and women around the world, are filled with great joy and happiness, proud of this great country and sending good wishes to our great motherland." 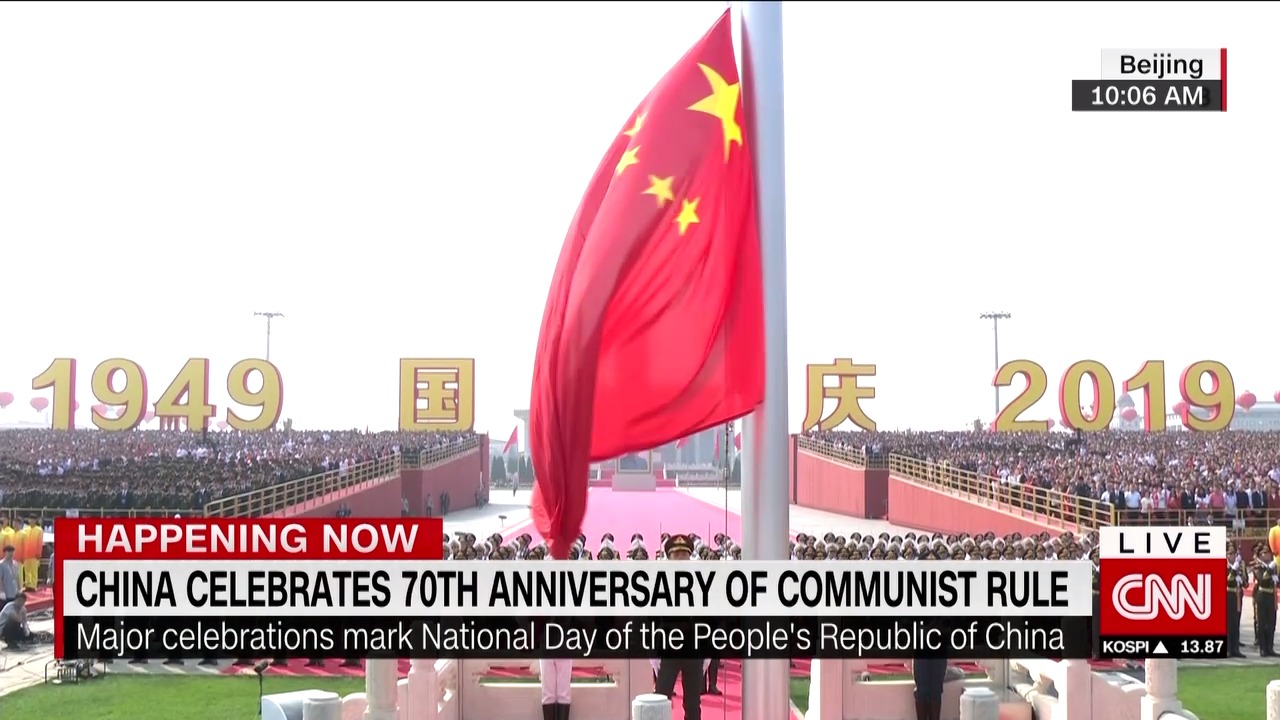 The ceremony has kicked off in Beijing, with a giant national flag unfurling and being raised as the Chinese national anthem plays.

Xi Jinping, standing in Tiananmen Square, sings along to the national anthem, along with a sea of people dress in yellow and military uniform. 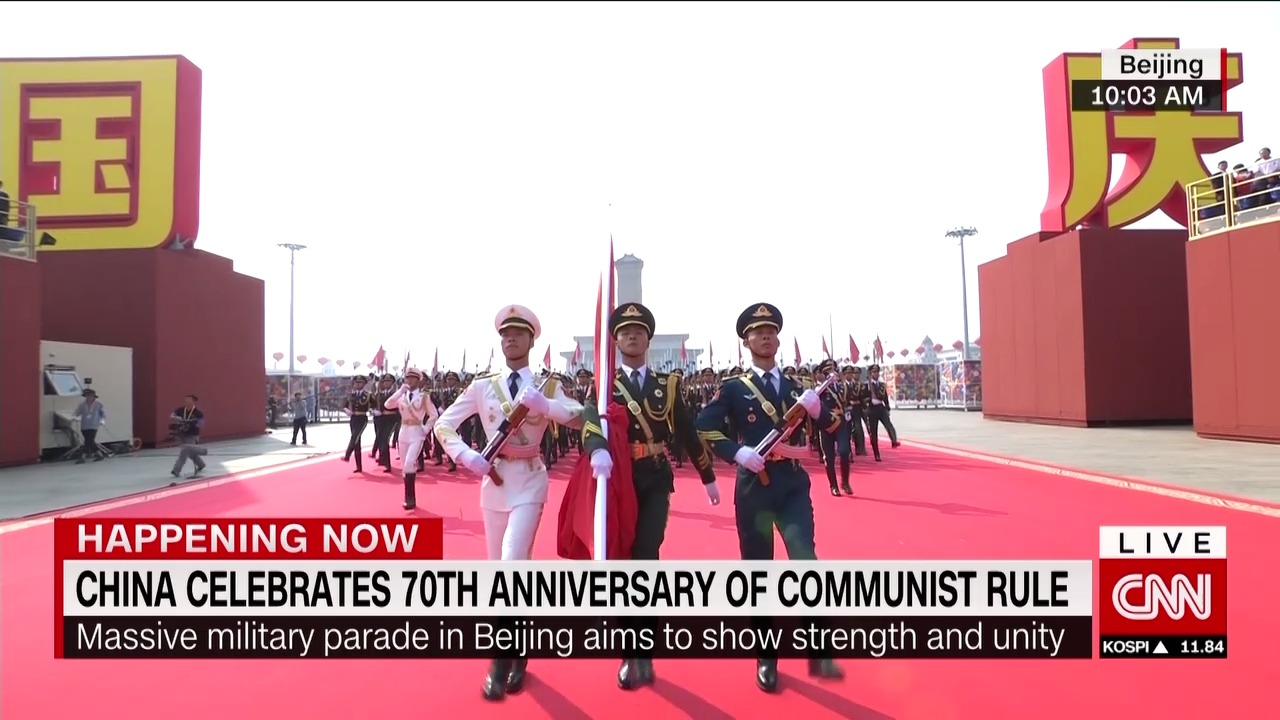 A total of 56 cannons -- to represent the country's 56 official ethnic minorities -- will be fired a total of 70 times, in honor of the 70 years since the founding of the People's Republic of China in October, 1949.

Chinese Premier Li Keqiang has kicked off the celebrations.

His pronouncement was quickly followed by a cannonade which boomed across Beijing, as members of the People's Liberation Army carried the country's flag.

While Li is China's number two official, he has been marginalized under Xi Jinping, with the President taking control of a number of key responsibilities -- such as the economy -- that typically fall under the Premier's remit.