Organization of American States president Luis Almagro tweeted Wednesday his support for National Assembly President Juan Guaido moments after he swore himself in as president of Venezuela.

“We congratulate @jguaido as President in charge of #Venezuela. He has our full support and recognition to push the return of his country to democracy #23Jan #OaswithVenezuela," he tweeted.

The Organization of American States voted not to recognize President Nicolás Maduro’s second term as president of Venezuela during an extraordinary session on Jan. 10. The vote was 19 to 6, with eight abstentions and one absence.

Guaido swore himself in as Venezuela's president before massive crowds in Caracas today. The move comes nearly two weeks after Venezuelan President Nicolás Maduro was inaugurated for a second term. The US, dozens of other countries and the Venezuelan opposition has decried Maduro's actions as illegitimate.

"The people of Venezuela have courageously spoken out against Maduro and his regime and demanded freedom and the rule of law," Trump said in a statement.

"Today, I am officially recognizing the President of the Venezuelan National Assembly, Juan Guaido, as the Interim President of Venezuela. In its role as the only legitimate branch of government duly elected by the Venezuelan people, the National Assembly invoked the country’s constitution to declare Nicolas Maduro illegitimate, and the office of the presidency therefore vacant. The people of Venezuela have courageously spoken out against Maduro and his regime and demanded freedom and the rule of law.
I will continue to use the full weight of United States economic and diplomatic power to press for the restoration of Venezuelan democracy. We encourage other Western Hemisphere governments to recognize National Assembly President Guaido as the Interim President of Venezuela, and we will work constructively with them in support of his efforts to restore constitutional legitimacy. We continue to hold the illegitimate Maduro regime directly responsible for any threats it may pose to the safety of the Venezuelan people. As Interim President Guaido noted yesterday: 'Violence is the usurper’s weapon; we only have one clear action: to remain united and firm for a democratic and free Venezuela.'"

In a statement, the spokesman said the Secretary General is urging all groups to lower tensions and pursue every effort to prevent an escalation:

“The United Nations firmly rejects any kind of political violence. We underline the urgent need for all relevant actors to commit to inclusive and credible political negotiations to address the challenges facing the country, with full respect for the rule of law and human rights.”

National Assembly President Juan Guaido swore himself in as President of Venezuela today before a massive crowd of supporters in Caracas.

“Raise your right hand, today, January 23rd 2019, in my condition as President of the National Assembly, invoking the articles of the Constitution – before Almighty God,” Guaido said, as the mass of supporters raised their hands. “I swear to formally assume the power of the National Executive Office as the President of Venezuela.

Guaido had declared the swear-in ceremony for Nicolas Maduro’s second term as president of Venezuela to be unconstitutional and called for new elections.

Many other countries, including the United States, said they also did not recognize Maduro’s new term.

Masses of protesters have gathered in Caracas, the capitol of Venezuela. The group is chanting “Sí, se puede," which means "yes, we can."

CNN's Jorge Luis Pérez Valery is on the ground, watching the protests unfold.

"It is hard to describe how shocked and amazed one can feel when journalism allows you to witness historic moments," he said. "Today was one of those moments for the people of Venezuela."

"It was Impossible not to grab the phone and shoot it," he said.

Wednesday's protests are expected to be the largest demonstration since 2017. Thousands of protesters clashed with security forces for months at that time, accusing President Nicolas Maduro of imposing a dictatorship. More than 120 people were killed in protest-linked incidents during that unrest.

President Trump is expected to recognize Venezuelan opposition leader Juan Guaido as the legitimate president of Venezuela once Guaido takes the oath of office — a move that could take place as early as Wednesday, three sources familiar with the matter said.

The expected move comes nearly two weeks after Venezuelan President Nicolas Maduro was inaugurated for a second term that the US, dozens of other countries and the Venezuelan opposition has decried as illegitimate.

Since then, Trump has mulled recognizing Guaido — the president of the National Assembly — as the country's legitimate president and top Trump administration officials have gradually ratcheted up their public statements, laying the groundwork for this step.

The White House is closely monitoring this week's protests and Maduro's response. On Tuesday, Vice President Mike Pence issued a message of support to Venezuelans planning to take to the streets, saying they had the "unwavering support of the United States."

Depending on the severity of Maduro's response, Trump is also prepared to take a range of actions to punish Maduro, including possible oil sanctions, two sources familiar with White House deliberations said. White House press secretary Sarah Sanders did not immediately respond to a request for comment.

The protests against Venezuela's President Nicolas Maduro and government today take place on a highly symbolic date for Venezuelans.

The protests also come weeks after Maduro began his second term in power as the country faces a deep economic crisis and dozens of countries dispute the legitimacy of his presidency. The opposition is accusing Maduro's government of "usurping power" and calling for new elections. 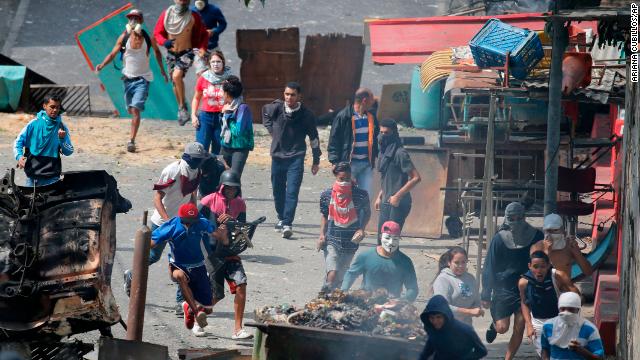 Scores of people are expected to take to the streets of Venezuela today in a revitalized effort against President Nicolas Maduro and his government.

Today's marches come weeks after Maduro began his second term in power as the country faces a deep economic crisis and dozens of countries dispute the legitimacy of his presidency.

The country's economic crisis: Maduro has continued the huge social welfare programs and price control policies of Hugo Chavez, who steered the country toward socialism before dying in 2013. Through nearly a decade of mismanagement, Venezuela squandered its profound oil wealth, leaving its economy in tatters and Latin America reeling from an unprecedented mass exodus of migrants in search of food and medicine.