There are now 7,500 people marching north as part of a migrant caravan through Mexico, caravan organizer Dennis Omar Contreras tells CNN. He said the organizers did a count of participants this morning.

He said in about an hour, the migrants will leave Mexico’s Tapachula for the town of Huixtla, which is located about 21 miles northwest from their current location. 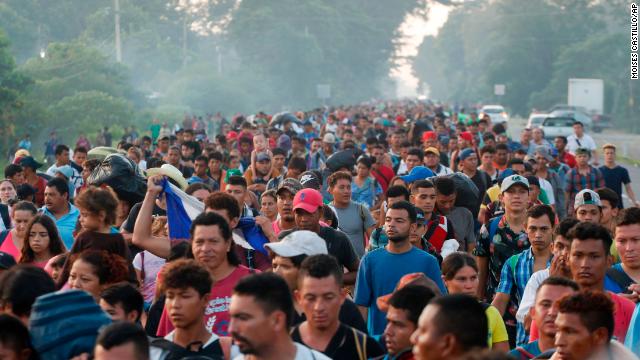 Crowds of migrants resumed their long journey north on Sunday from the Mexican border city of Ciudad Hidalgo, according to Mexican federal police officers.

It's unclear whether the caravan will be allowed to reach the US border. Mexican authorities previously outlined their plan to respond to the caravan once it arrived at the Mexican border:

Mexican authorities also have said they're asking for help from the United Nations High Commissioner for Refugees to process migrants seeking refugee status.

The Pentagon has not been tasked to “provide additional support” on the US southern border, Department of Defense spokesperson Lt. Col. Jamie Davis said in a statement when asked by CNN.

On Monday, President Trump tweeted that he has “alerted Border Patrol and Military” about the caravan heading to the border.

"Beyond the National Guard soldiers currently supporting the Department of Homeland Security on our southern border, in a Title 32, U.S. Code, section 502(f) duty status under the command and control of the respective State Governors, the Department of Defense has not been tasked to provide additional support,” Davis statement read.

In a statement released Sunday, Homeland Security Secretary Kirstjen Nielsen said “we must remain mindful" of criminals who try to prey on those participating in the caravan making its way through Mexico and said the US will work with its partners to investigate and prosecute those who try to profit from it.

While we closely monitor the caravan crisis, we must remain mindful of the transnational criminal organizations and other criminals that prey on the vulnerabilities of those undertaking the irregular migration journey. We shall work with our partners in the region to investigate and prosecute to the fullest extent of the law all who seek to encourage and profit from irregular migration. We fully support the efforts of Guatemala, Honduras and Mexico, as they seek to address this critical situation and ensure a safer and more secure region,” the statement said. ­

The Mexican standoff on the Suchiate bridge was just another bump in the road for the #CaravanaDeMigrantes
They are now 8 miles north of the river with a 30 day walk before they reach the U.S.

The caravan continues its march north into Mexico. In a pair of video tweets from CNN's Patrick Oppmann, migrants walk as a helicopter hovers overhead.

In this tweet from CNN's Patrick Oppmann, some Mexicans can be seen standing with clothes to donate to the migrants walking by.

Hundreds of Mexican police in riot gear mobilizing ahead of migrant caravan.

Crowds of migrants are walking from the Mexican border city of Ciudad Hidalgo along the highway toward Tapachula, Mexican federal police officers told CNN reporters on the ground.

About 10 empty buses are awaiting the migrants on the highway between the cities. Police have told CNN they have instructions from the Mexican government to carry the migrants to shelters in the city of Tapachula.